On Monday, the climactic indicators signaled a selling exhaustion, meaning on Tuesday we were to expect higher prices--and we got them. The bearish climactic readings came alongside a bullish hammer candlestick and off an end of day recovery that happened on high volume. See the chart below. Today, we have the opposite situation--a steady decline that became more forceful at the end of the day as volume poured in. While the RSI is oversold, it is accompanied by a declining (and not oversold) PMO on a SELL signal. 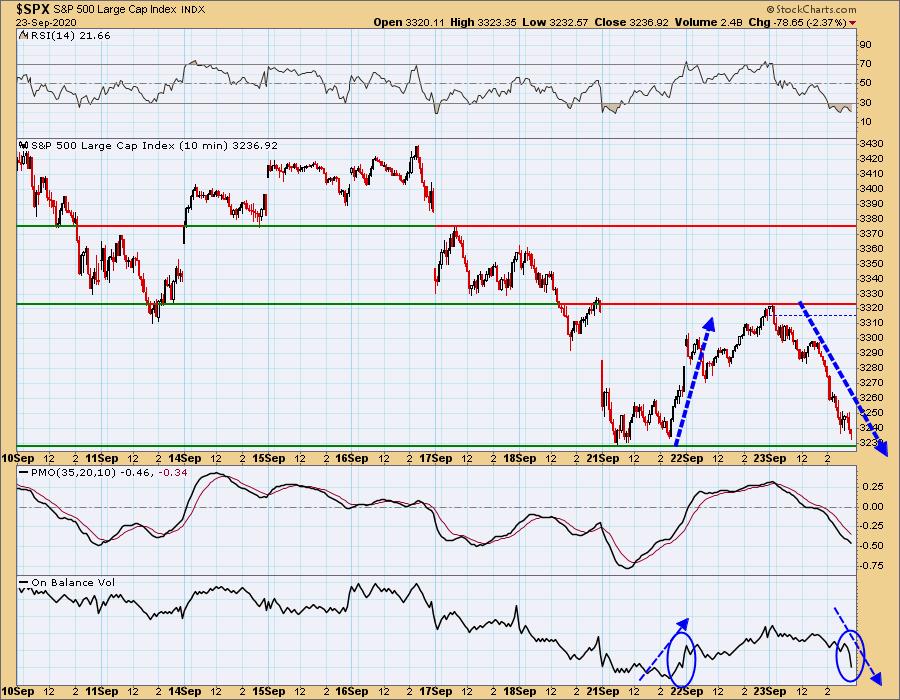 Click here to register in advance for the recurring free DecisionPoint Trading Room (Next one is 9/28)! 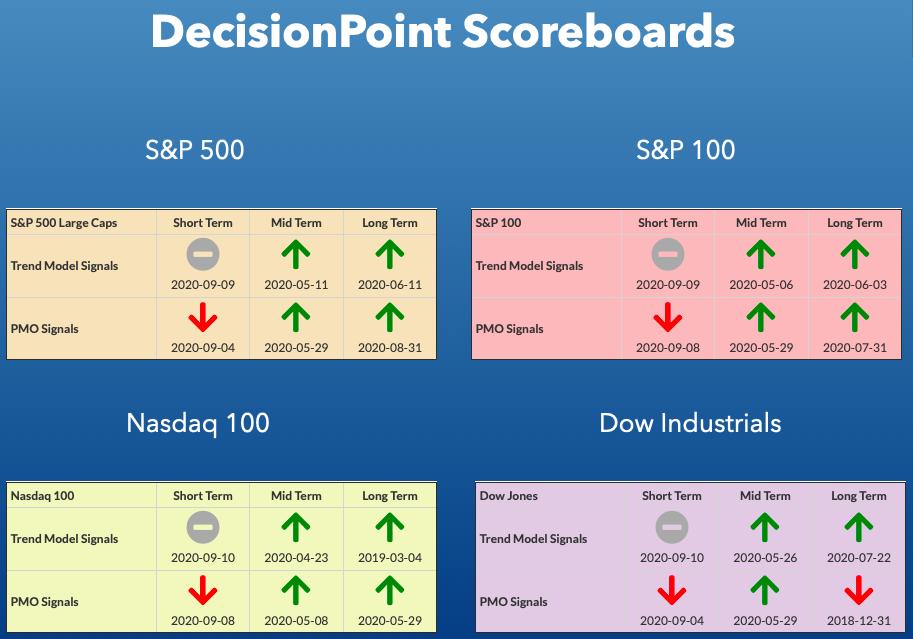 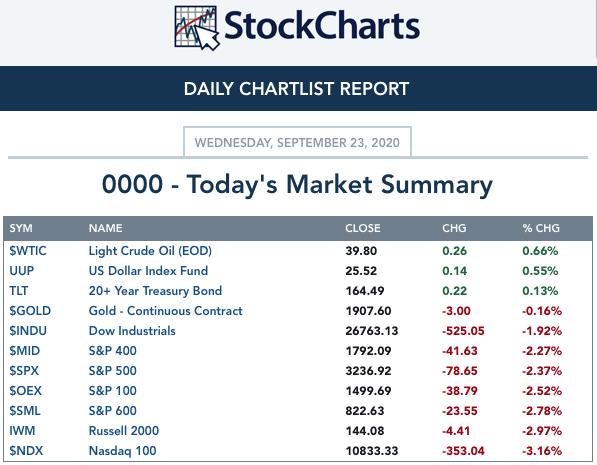 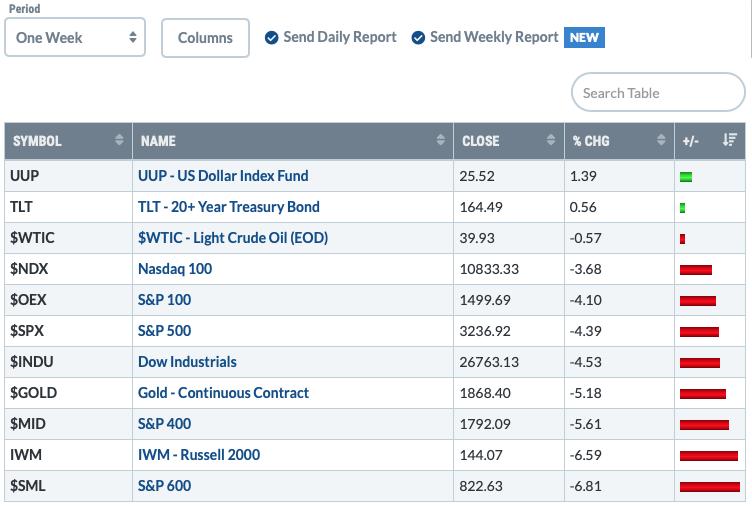 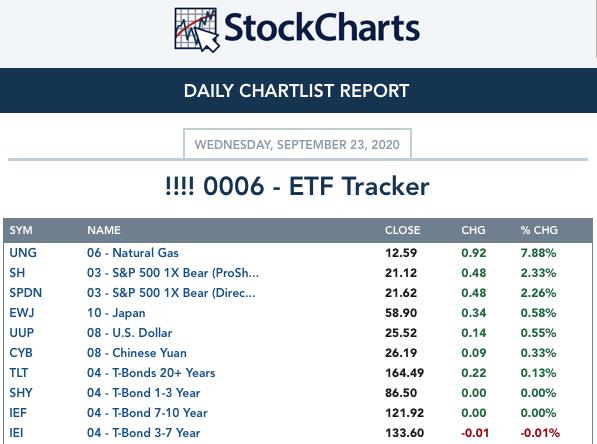 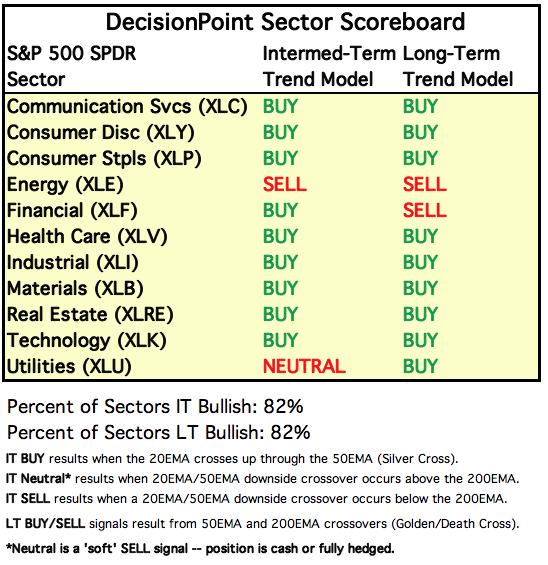 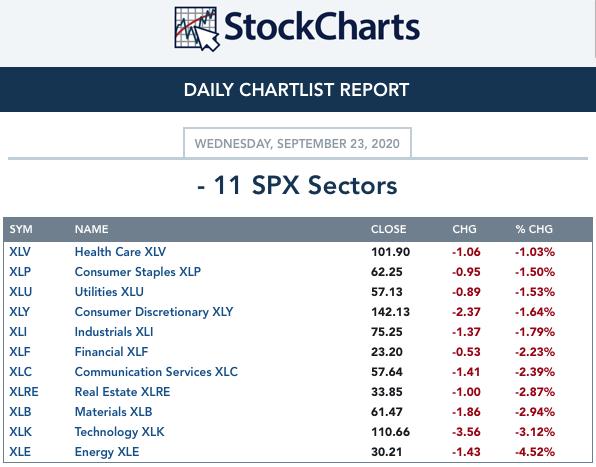 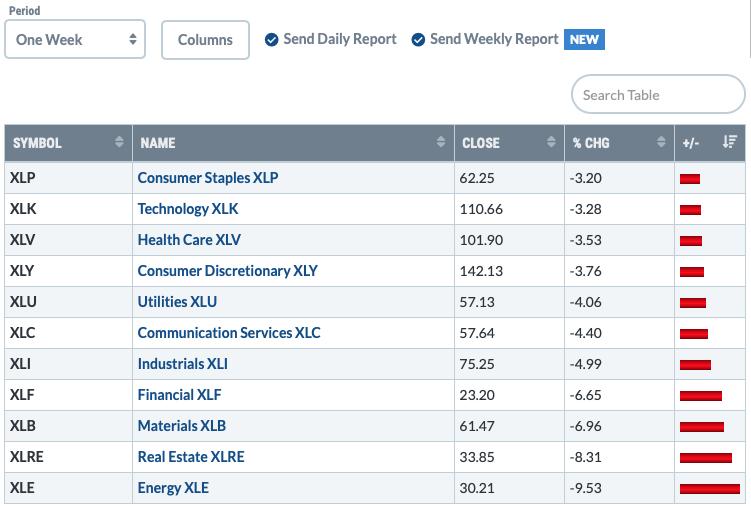 Price again was unable to get above overhead resistance today. Bulls can point out that support did hold, but sitting in the bear camp, I point to the diving PMO, negative (and not oversold) RSI and VIX that is oscillating mostly below its EMA on the inverted scale...not to mention those bearish engulfing candles I already revealed. 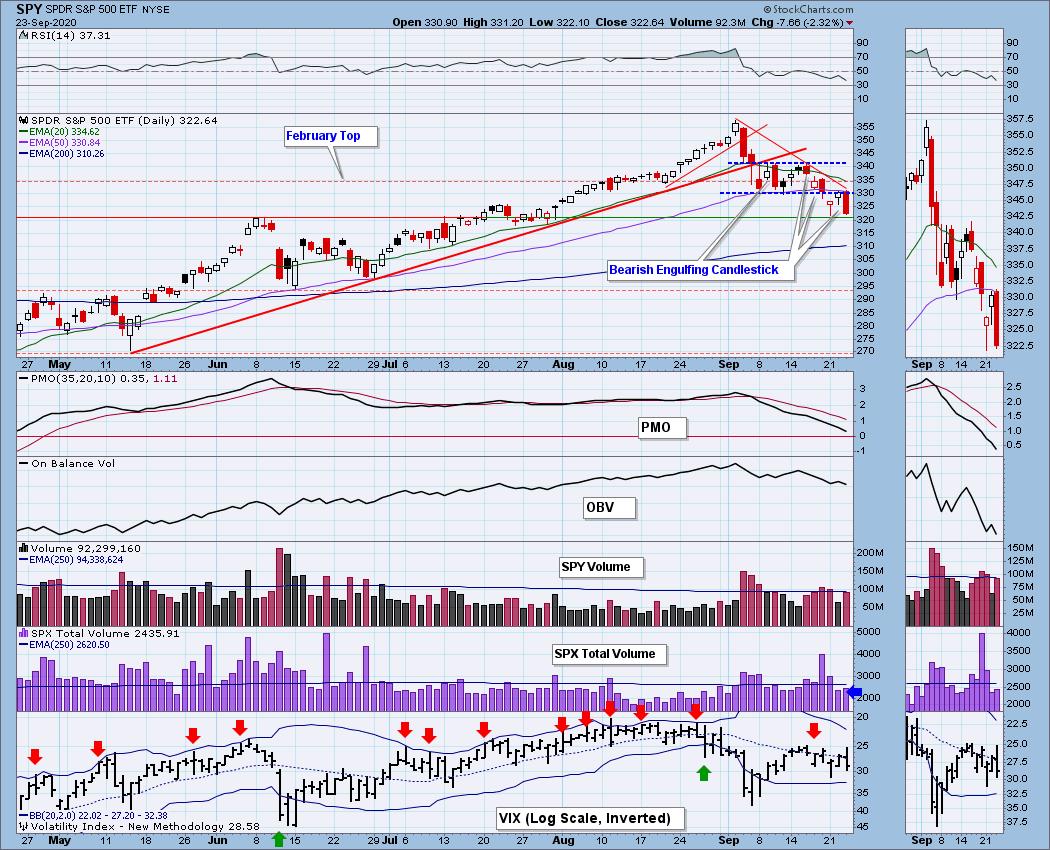 Climactic Market Indicators: Very negative climactic readings are coming off a 1%+ rally yesterday. Since the previous day's "trend" was rising, I read the climactic readings as an initiation impulse, not a selling exhaustion. There was no selling yesterday, so what would be exhausting? Total volume was below the annual average today on the big decline which can give the bulls some solace. 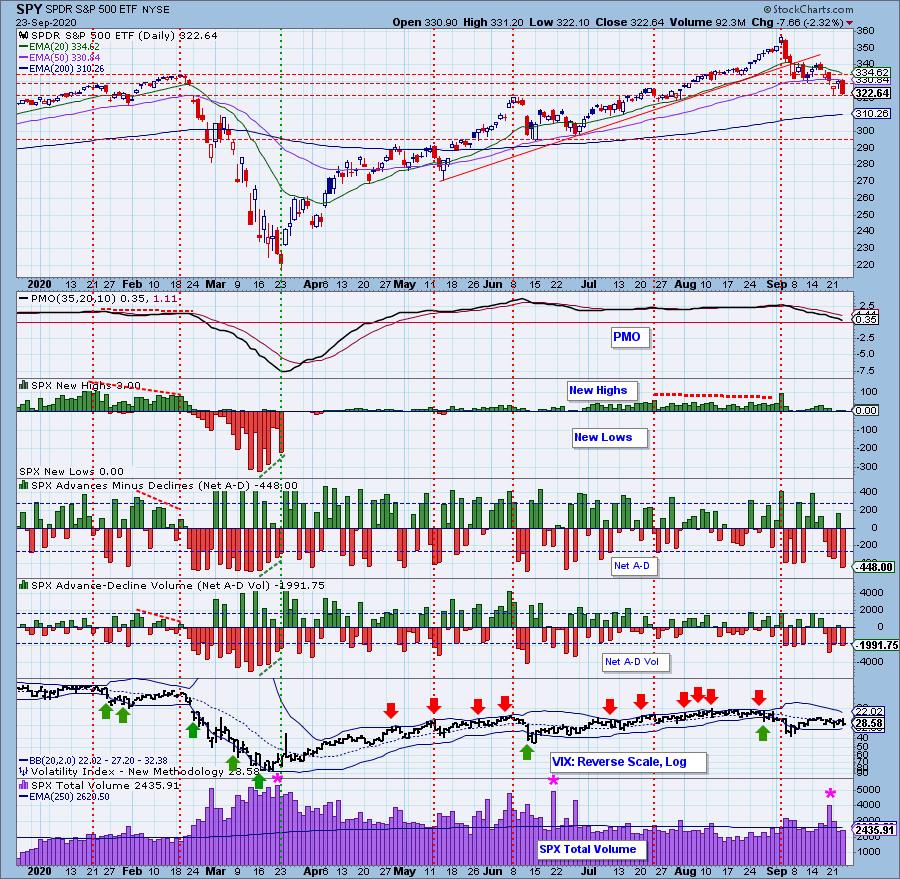 Short-Term Market Indicators: The short-term market trend is DOWN and the condition is OVERSOLD. Based upon the STO ranges, market bias is BEARISH.

We saw impulses on the STOs as they moved to a low we haven't seen since March. In a market with a bullish bias, I would look at these very oversold conditions and think that a rally is ahead. Instead I consider these readings to also be an initiation impulse given the clear bearish bias in the market currently. The %Stock indicators have nearly reached the oversold readings we had during the bear market. Note that they remained there despite being very oversold given the bearish bias of the market. 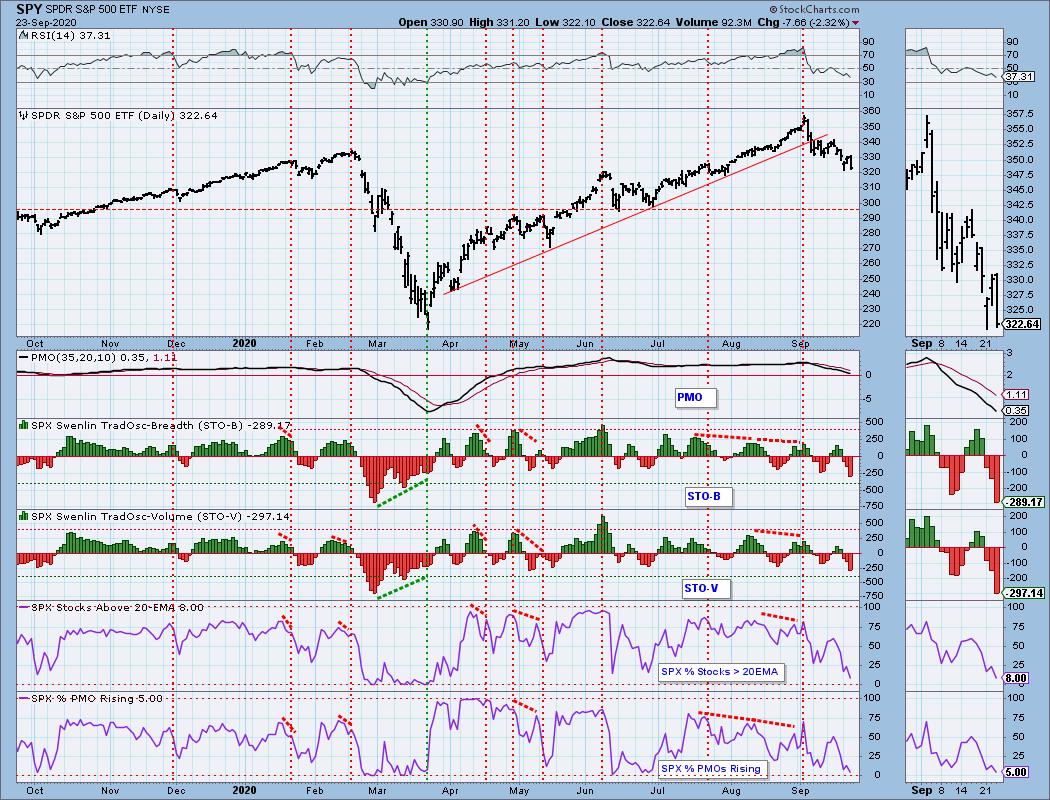 The GCI is at the same level it was yesterday and the day before. It's good that it hasn't given up the ghost yet. Unfortunately the BPI and SCI are configured very negatively and neither is oversold. 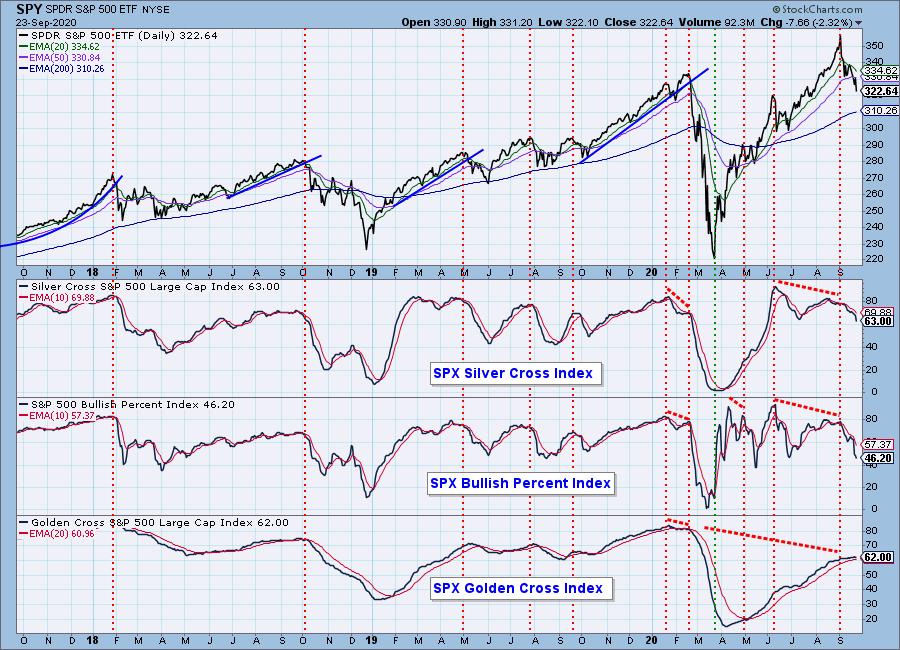 The intermediate-term market trend is DOWN and the condition is OVERSOLD. The market bias is BEARISH.

These indicators are oversold for a bull market bias. Unfortunately the bias is bearish and we know that these readings can move much much lower under those circumstances. 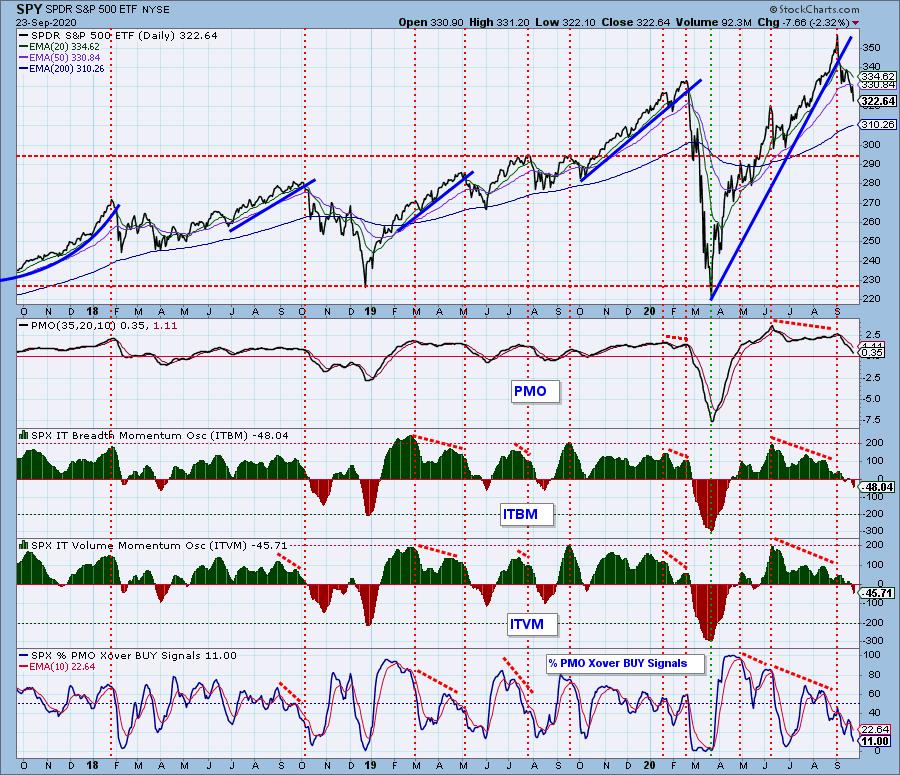 CONCLUSION: The charts are telling me we have an initiation impulse that implies more selling ahead...at least tomorrow or the next day. The bearish engulfing candle is a one-day pattern and climactic indicator readings are generally good for a day or two. However, our short-term indicators are bearish too which indicates this initiation to lower prices could catch on next week. The intermediate-term indicators are also bearish. They are mostly oversold, but that is in a market with a bullish bias. There is a clear bearish bias given the high VIX readings, declining PMO and RSI. I would like to believe we are at a launch point to higher prices, but I don't see it yet.

UUP Daily Chart: The Dollar was up again today and it finally pushed through the gap. If this turns out to be a "cup and handle" pattern, we could see a bit of a pullback before the rally continues. The indicators are bullish and suggest higher prices. Note the intense volume coming in on the Dollar ETF UUP. 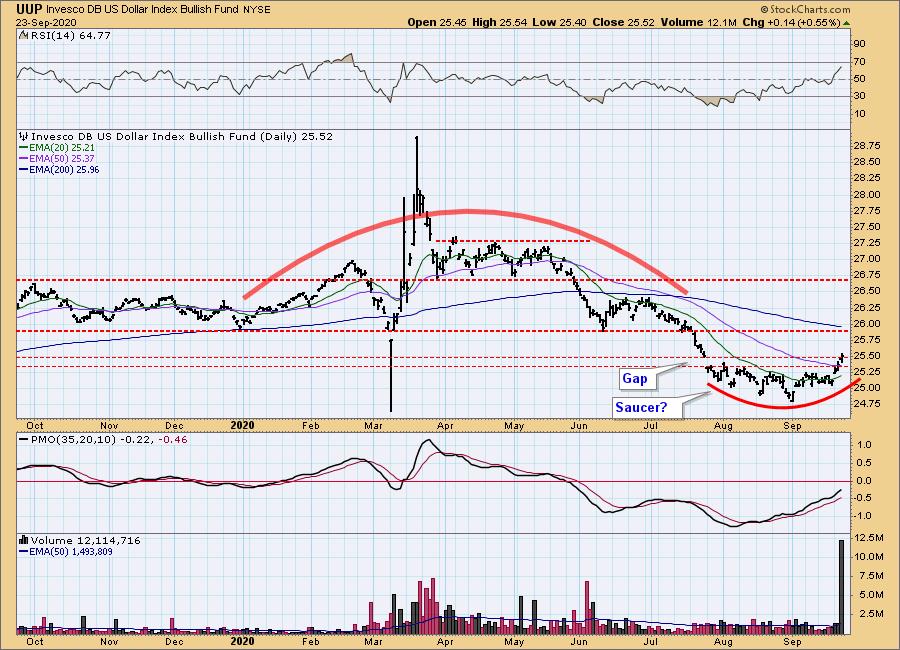 GOLD Daily Chart: Now this is important to note. The Dollar was up 0.55% today, but Gold was down -2.05%. This tells me that the Dollar was not the problem for Gold, it was due to an increase in sellers. Price did not hold support at the August low so the next stop is $1825. The PMO is accelerating lower and will reach negative territory soon. The RSI is very negative, but not yet oversold. I don't like it. If the market does continue lower, we could see a flight to Gold.

Full Disclosure: I own GLD. 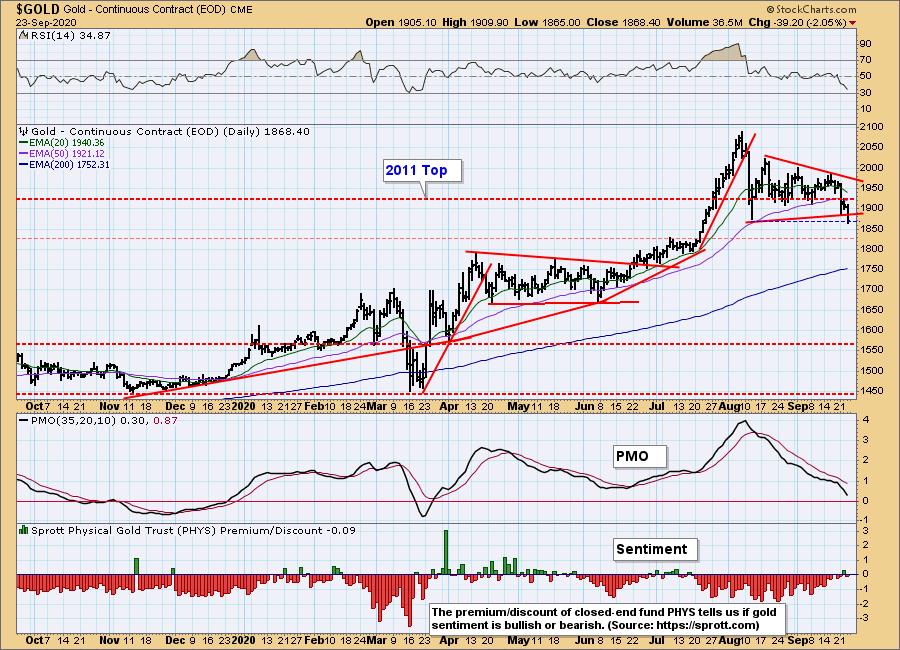 GOLD MINERS Golden and Silver Cross Indexes: With Gold and the market spiraling lower, Gold Miners took it doubly on the chin. Price is sitting on support at the May top. It would be a great place to bounce. Indicators are very oversold with no components having price above their 20-EMA and less than 4% having price above their 50-EMA. Unfortunately, if we are looking at a new bear market decline ahead, we can see that these oversold readings can persist as they did in March and into April. The other indicators aren't oversold. I could see Miners moving lower to test the 200-EMA if Gold doesn't right itself quickly. 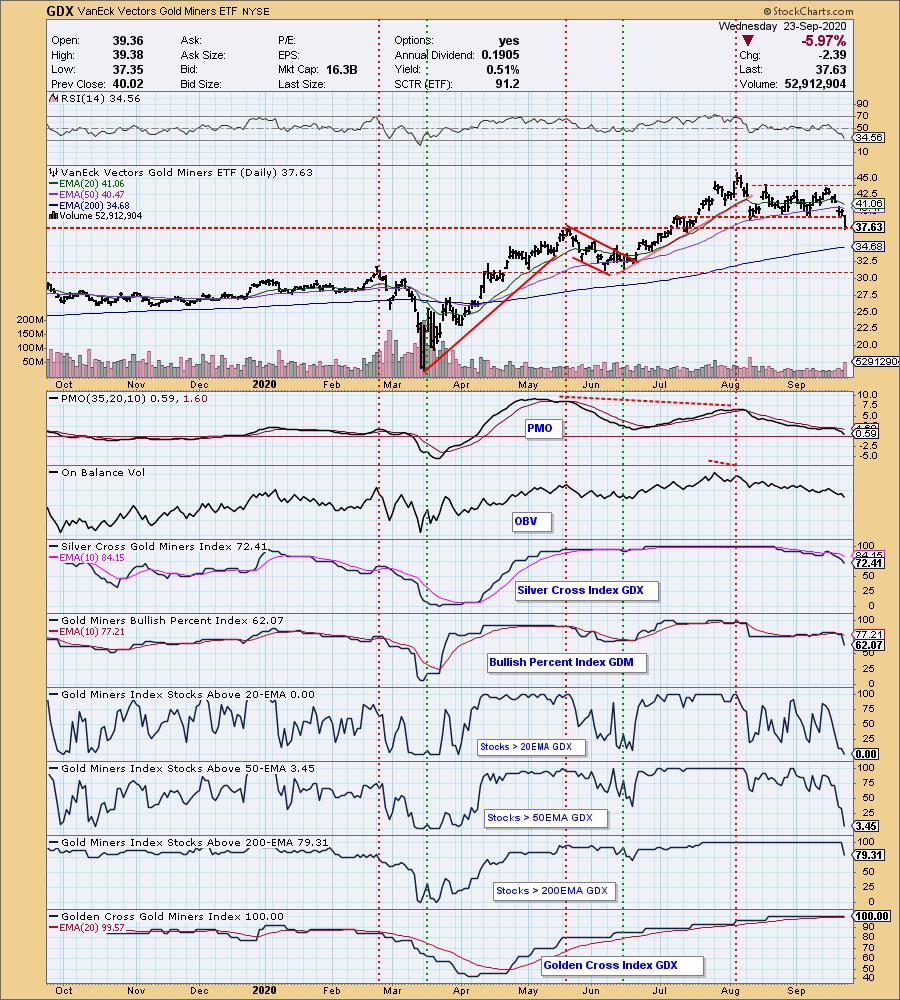 "The 20-EMA is still forming resistance. We now have a PMO that has topped below its signal line and a negative RSI. It appears we may have a new trading channel (annotated in blue)." 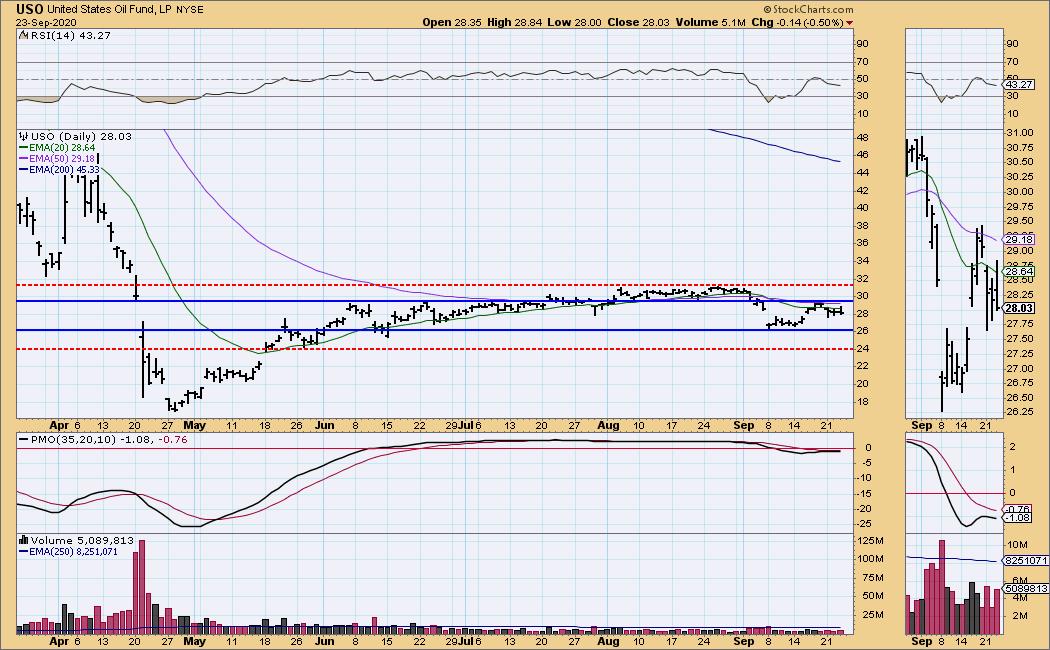 "Really not much to talk about with TLT. It continues to consolidate sideways as it struggles to overcome resistance at the 20/50-EMAs. The PMO is now on a BUY signal and the RSI has reached positive territory so we could be seeing the beginning of a small rally to possibly challenge the September top."

Full disclosure: I own TLT. 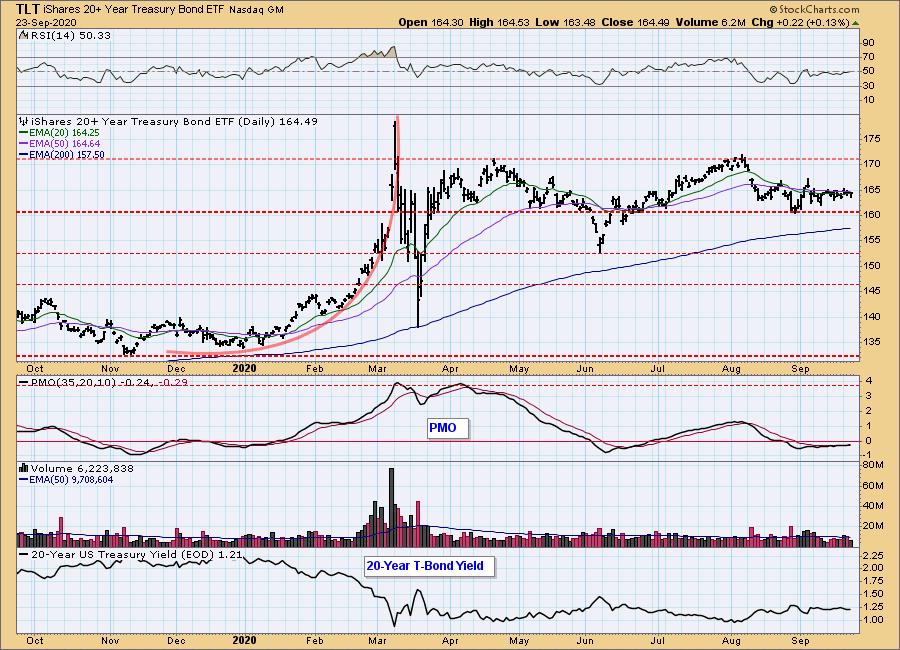 Have you subscribed the DecisionPoint Diamonds yet? DP does the work for you by providing handpicked stocks/ETFs from exclusive DP scans! Get in on the new "DecisionPoint Diamond Mine" trading room that is part of that subscription! Contact support@decisionpoint.com for more information!