We had a few sector signal changes, but the most interesting was the "golden cross" on Consumer Discretionary (XLY). The other sectors with new signals were Financials (XLF), Industrials (XLI) and Utilities (XLU). These three sectors had "silver crosses", meaning the 20-EMA crossed above the 50-EMA. Silver crosses generate IT Trend Model BUY signals.

Let's look at XLY first. Indicators look pretty bullish with rising bottoms and positive crossovers. Today's price movement moved above the January 2020 high. The current resistance level is gap resistance from the initial drop into the bear market. Technically it reached and closed that gap today, but price closed below resistance--barely. Price is now overbought based on the RSI, but it could certainly stay here given the bullish price action. Time to keep an eye on all-time highs resistance. I would've never considered this possible given the virus causing unemployment and closure of restaurants, bars and retail outlets. But, here you have it. 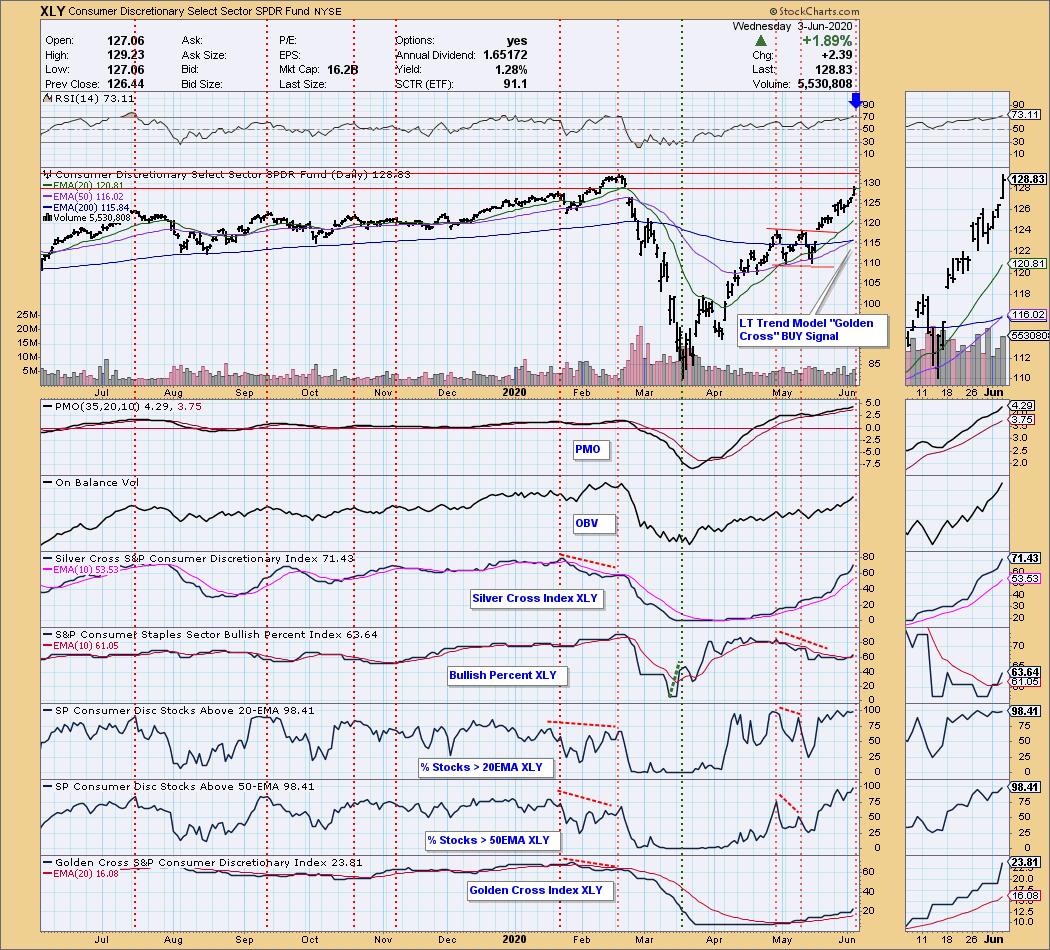 XLI actually had its "silver cross" yesterday. This was the leading sector today. Indicators remain bullish, but I have heartburn with an overbought RSI and 100% reading on %Stocks > 20-EMA and the 98.61% reading %Stocks > 50-EMA. As I noted earlier, overbought conditions can persist during bullish price action. 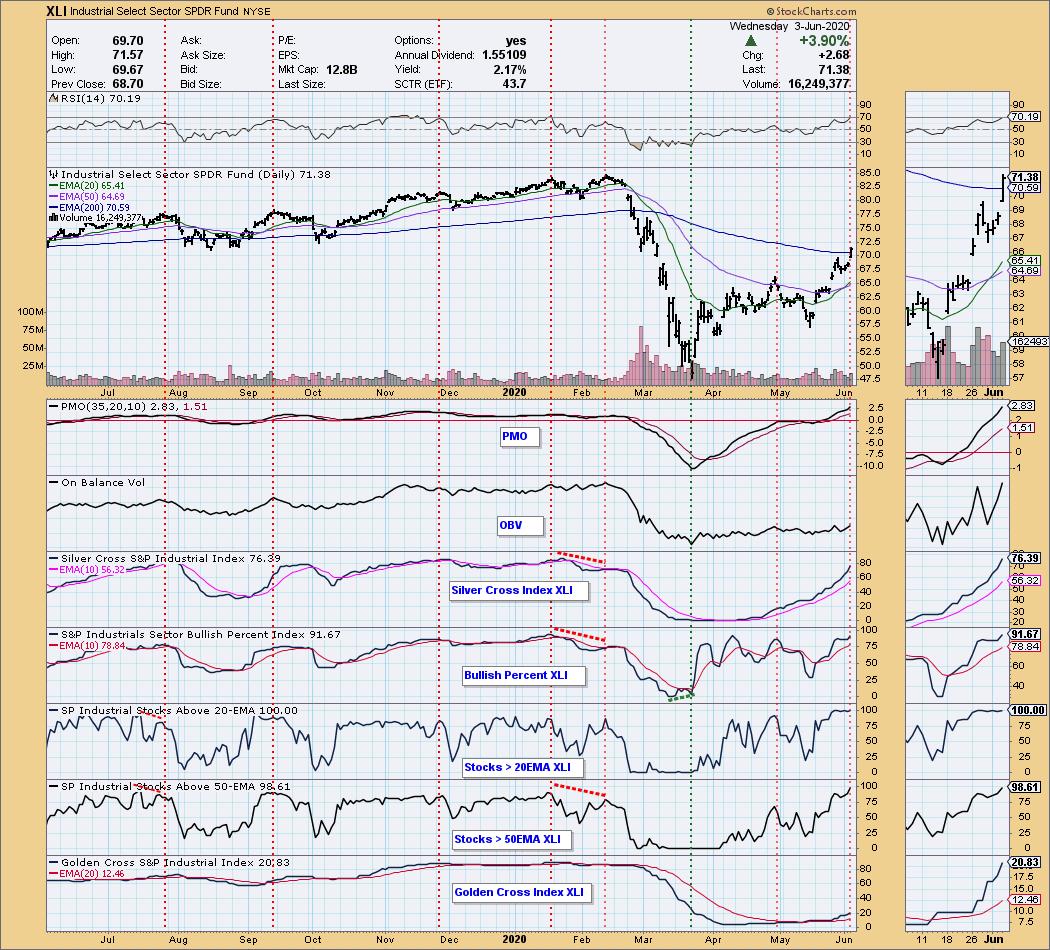 XLF was the second best sector today. While the RSI isn't overbought, %Stocks > 20/50-EMAs are very overbought. I also noted a negative divergence between the OBV and price tops. 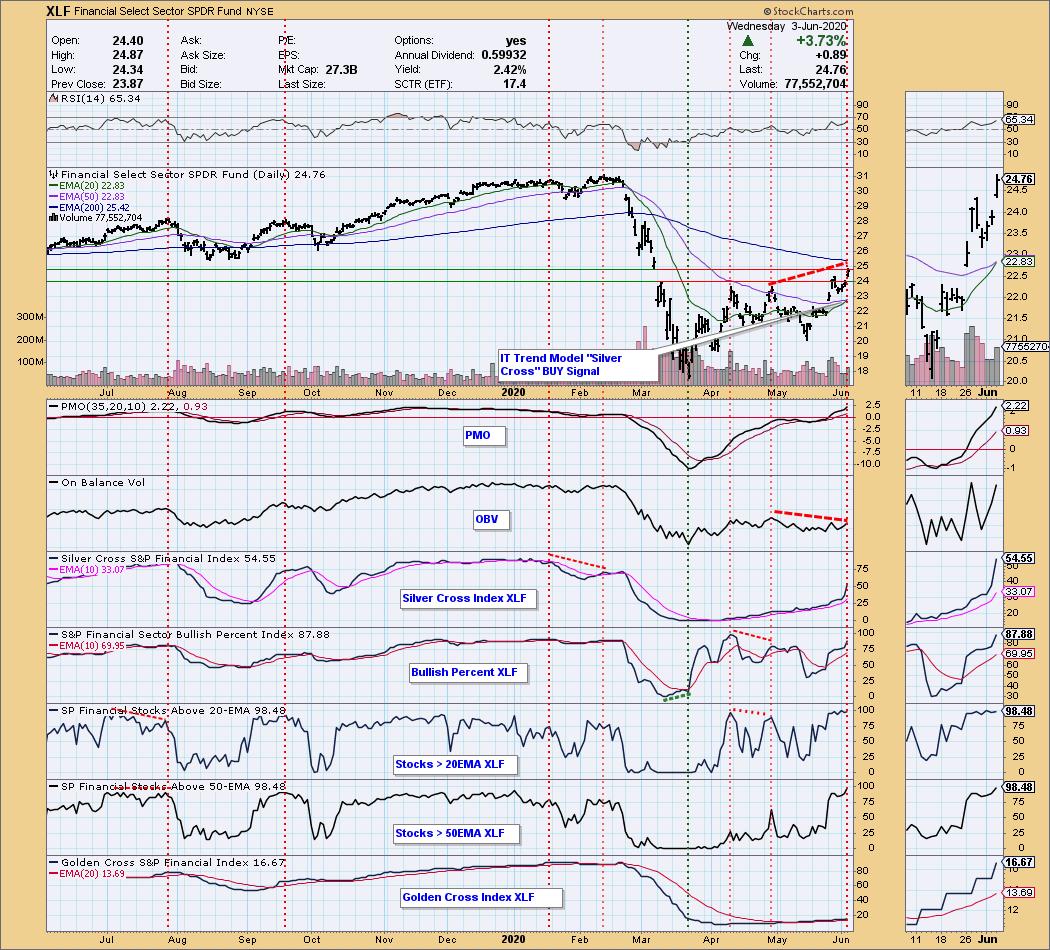 While the RSI isn't overbought on XLU either, it does have the same overbought indicators. The OBV did react as we would want on this breakout above the April top by moving higher than the OBV reading at that April top. 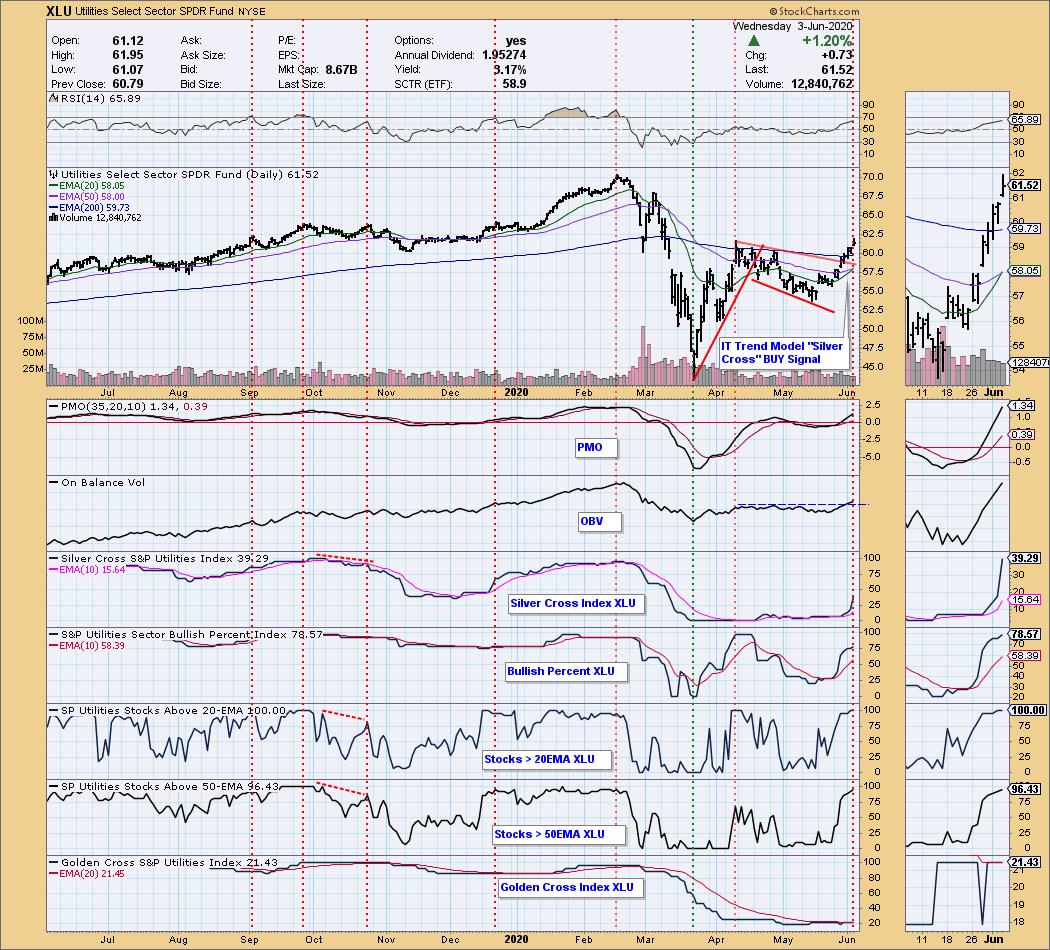 I will be traveling July 1 - July 15. I will be writing on the road, but broadcasting will likely be suspended during that time. It's going to be an adventurous road trip for me and my husband. We will be taking a train from Los Angeles to New Orleans, visiting family, checking out retirement areas and then renting a car and making our way back to California with various sightseeing stops along the way. I'll be sure to post a picture or two and I'm sure I'll have funny stories to share along the way. It'll be interesting to see the various stages of the reopening of America. A heads up to Bundle subscribers, after tomorrow the LIVE Trading Room will be going on hiatus as Mary Ellen will also be out of pocket in the upcoming month. We hope to reopen in late-July. Please direct questions to erin@decisionpoint.com. 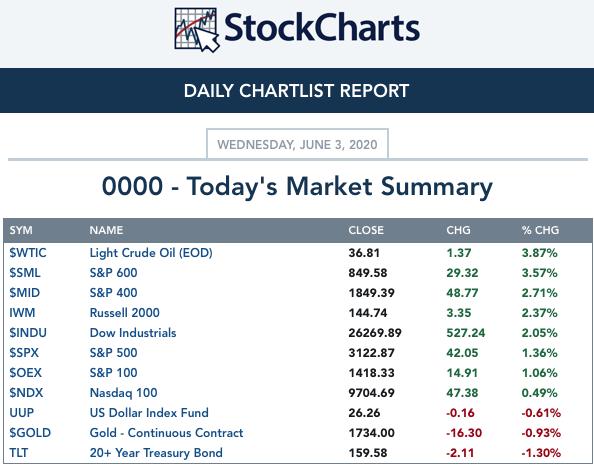 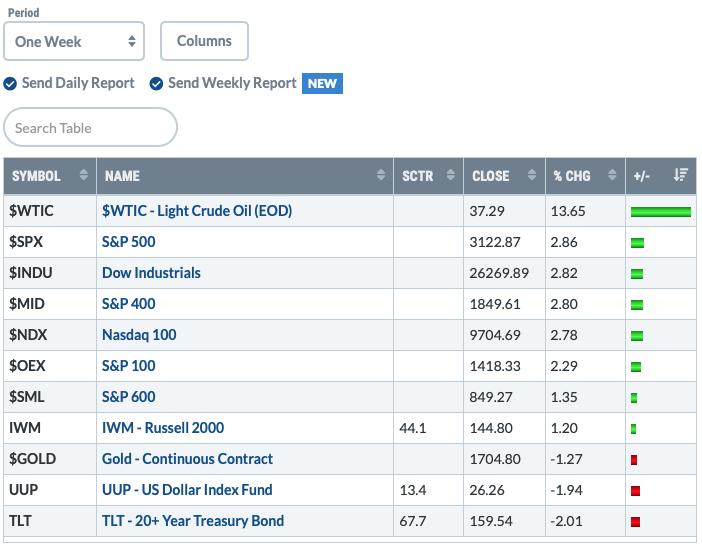 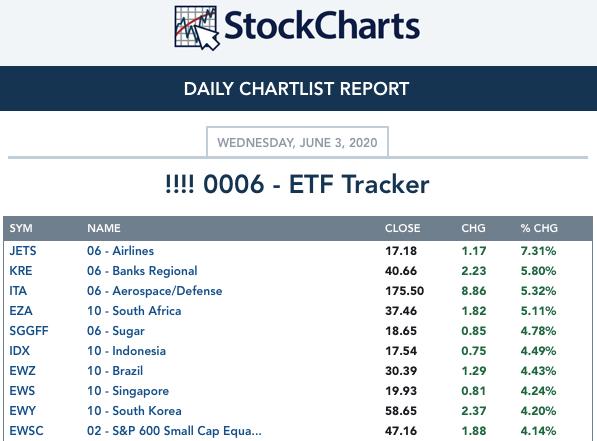 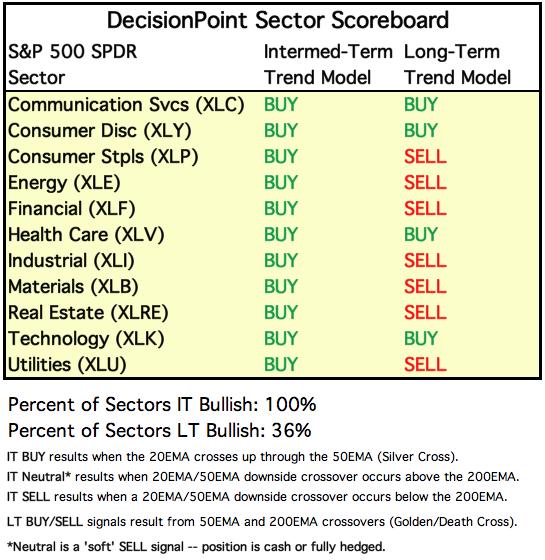 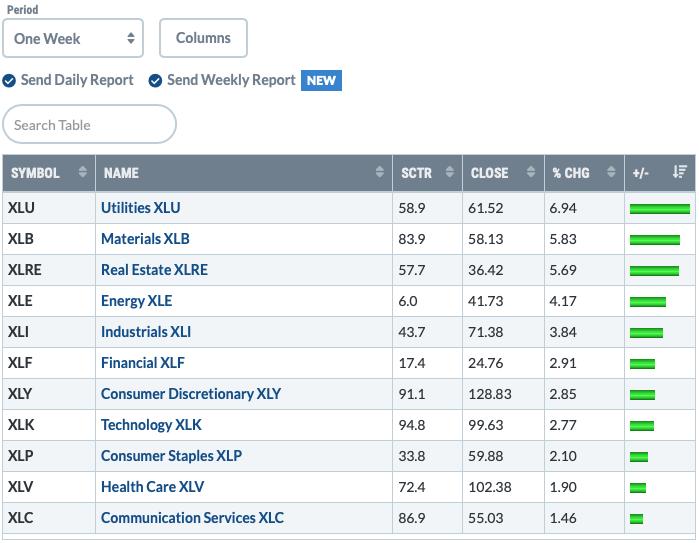 SPY Daily Chart: One of the new concerns with the market is the development of a short-term rising wedge. However, price today nearly broke out of the top of the wedge instead of breaking down as expected. Volume was higher on the day which is good given we had a rally of 1.33% on the SPY. The PMO is still rising but is at an overbought 2.8 reading. Typically the SPY's PMO has a range between -2 and +2. The OBV is confirming. The next area of overhead resistance to watch is the 320 level. 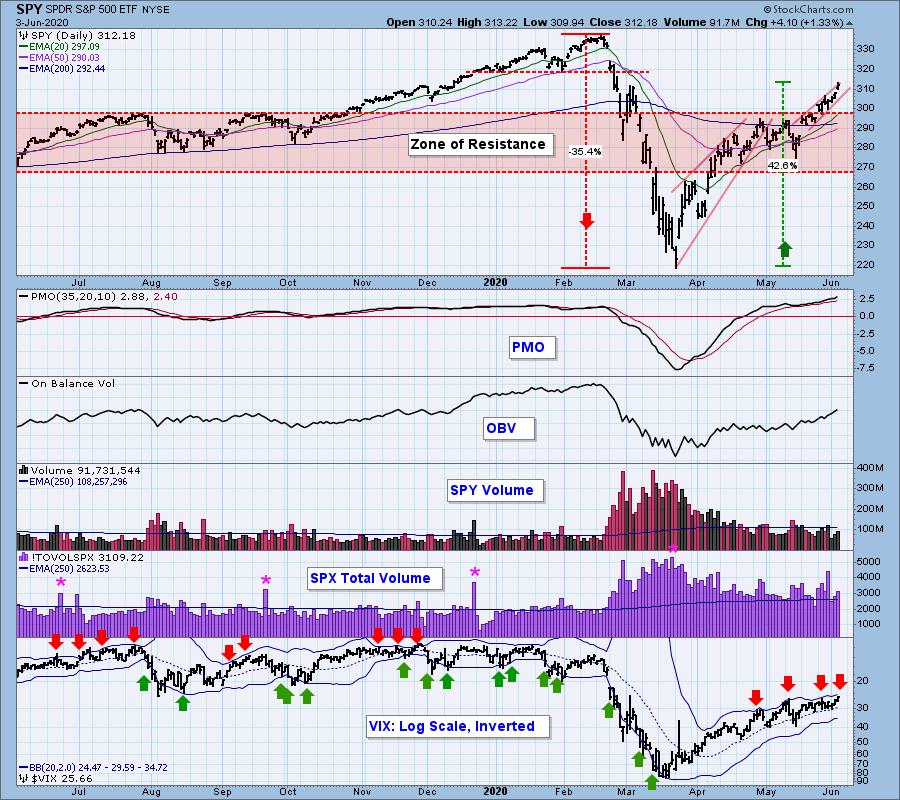 Climactic Market Indicators: Readings were somewhat climactic. I note they are confirming the rally as these indicator readings have been rising since last week. The VIX hasn't penetrated the upper Bollinger Band yet, but it is telling us we could be vulnerable to a pullback in the next day or two. 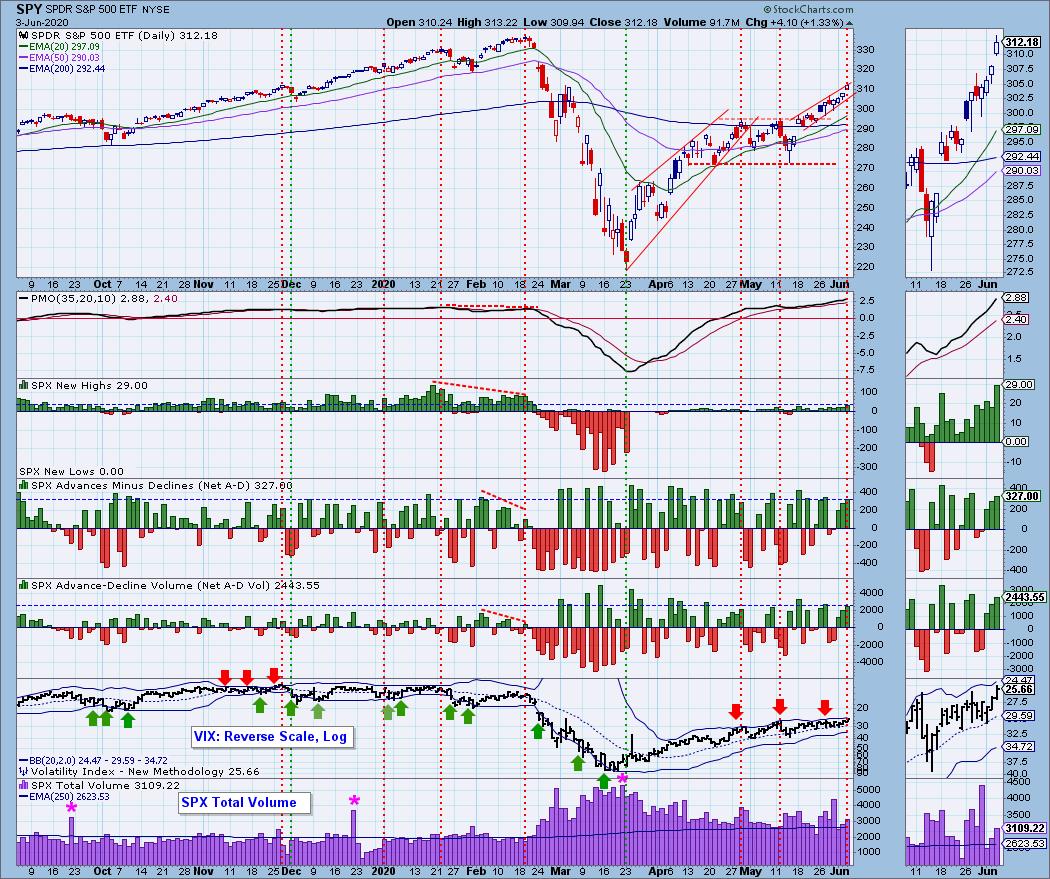 Short-Term Market Indicators: The ST trend is UP and the market condition is OVERBOUGHT based upon the Swenlin Trading Oscillator (STO) readings. STOs are rising which is good. My concern would be that the STO-V tops and that would set up a negative divergence with declining tops. Other than that, the indicators look pretty healthy, albeit overbought. 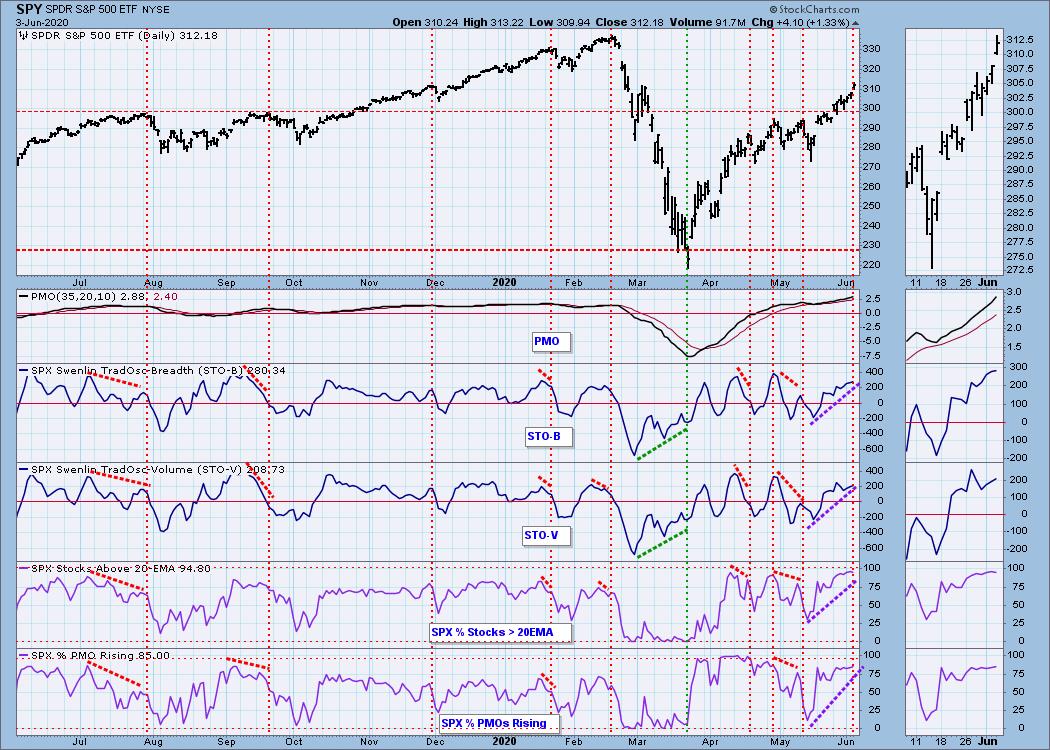 Intermediate-Term Market Indicators: The Silver Cross Index (% of SPX stocks 20EMA > 50EMA) and the Golden Cross Index (percent of SPX stocks 50EMA > 200EMA) are rising. The BPI has nearly reached past its top from the beginning of May. If we don't want declining tops, that will be important.

The IT trend is UP and the market condition is NEUTRAL based upon the ITBM and ITVM. All are rising nicely, but the %PMO Xover BUY Signals looks like it may be topping and that would set up a negative divergence. 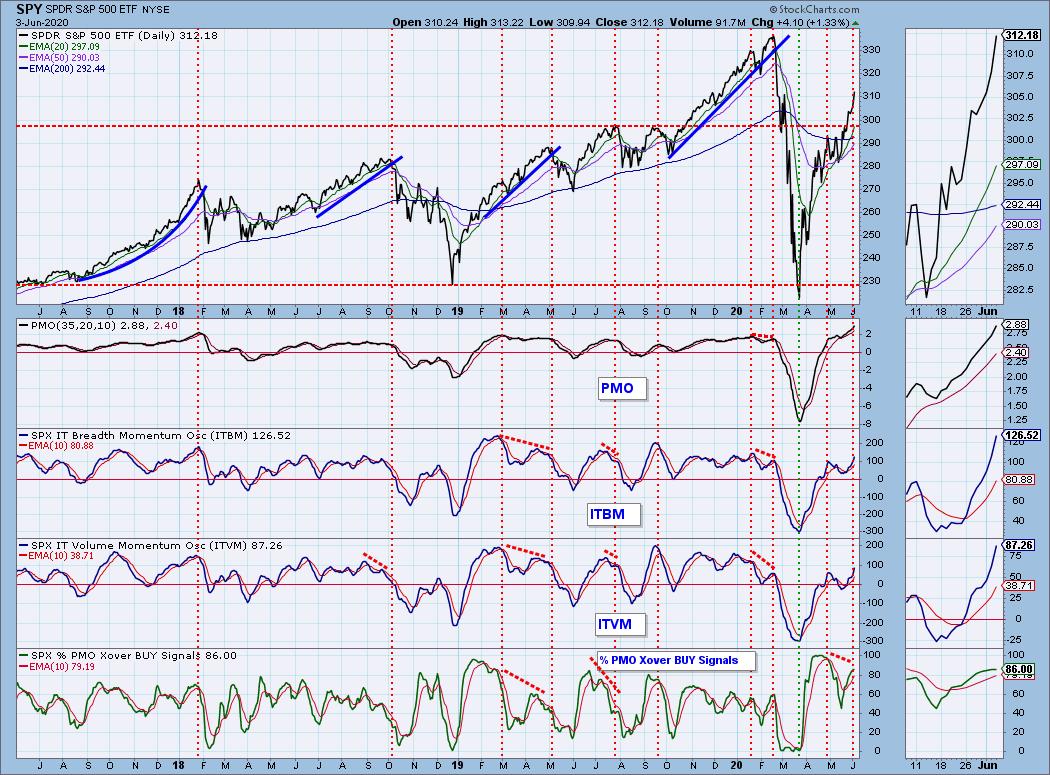 CONCLUSION: The ST trend is UP and IT trend is UP. Market condition based on ST indicators and IT indicators is NEUTRAL to OVERBOUGHT. I remain bullish. The indicators aren't raising any major warning flags. Price is moving out of the top of a bearish rising wedge. That could be considered especially bullish, but given the overbought readings on some of our indicators, I'll be watching for an exhaustion in the very short term. The VIX seems to suggest we could see that pullback given its nearness to the upper Bollinger Band on the inverted scale.

UUP Daily Chart: Yesterday's comments still apply with an addition: "UUP has now dropped below its 200-EMA. That's critical support that's been broken. I would look for further downside especially given the very negative PMO configuration." One bright spot could be the RSI and PMO which are now reaching very oversold territory. Price hit support at late January low, so possibly these oversold conditions could lead to a reversal. I suspect we will need to see the $26 level hit before it rallies. 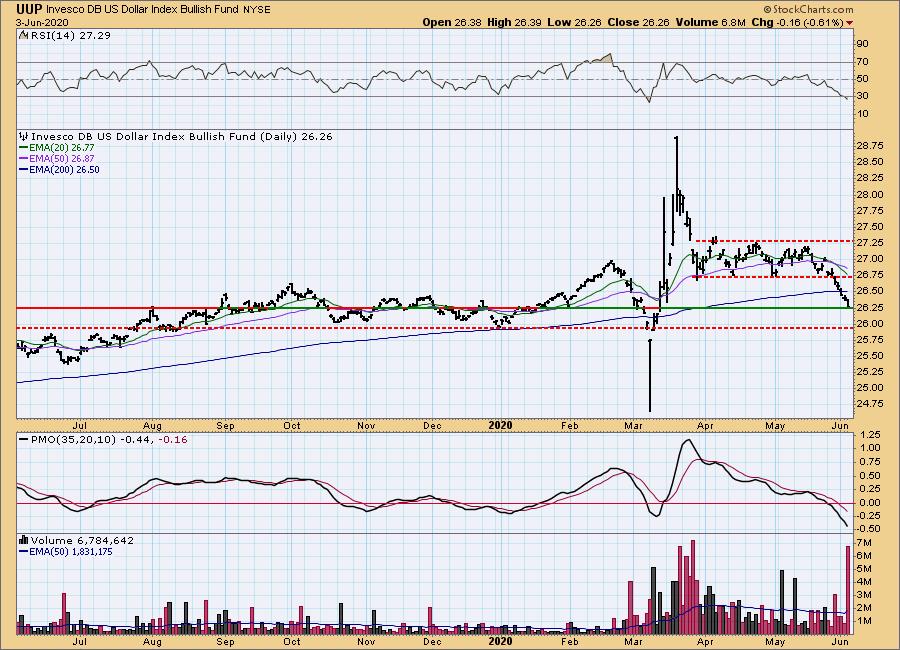 GOLD Daily Chart: As I suspected, Gold did go down to test the rising bottoms trendline. It crossed below the 50-EMA but closed just above it. The PMO is very negative and the RSI just dropped below net neutral (50) so now I'm considering the $1650 level as strong support. A close above $1700 today was a win for gold bugs, but I am skeptical this will be the rally point. 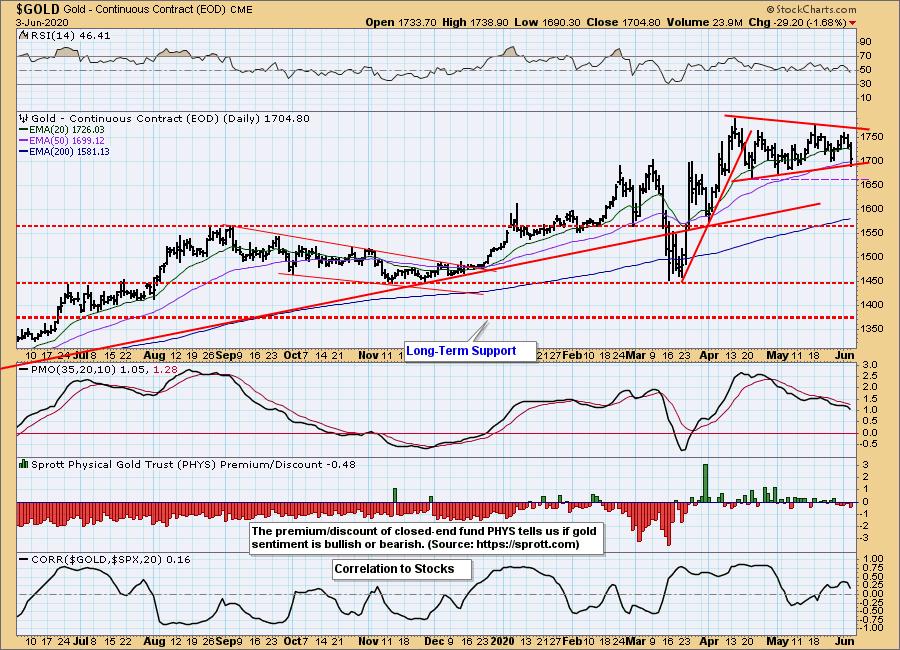 GOLD MINERS Golden and Silver Cross Indexes: Gold Miners were the biggest loser on our ETF Tracker. Today's gap down took out short-term support from the end of May. While the SCI and GCI aren't move down, the declining tops on the BPI are confirming this current decline. $32 needs to hold and that level also coincides with not only the February top, but also April support/resistance levels. The PMO and BPI suggest that level won't hold. 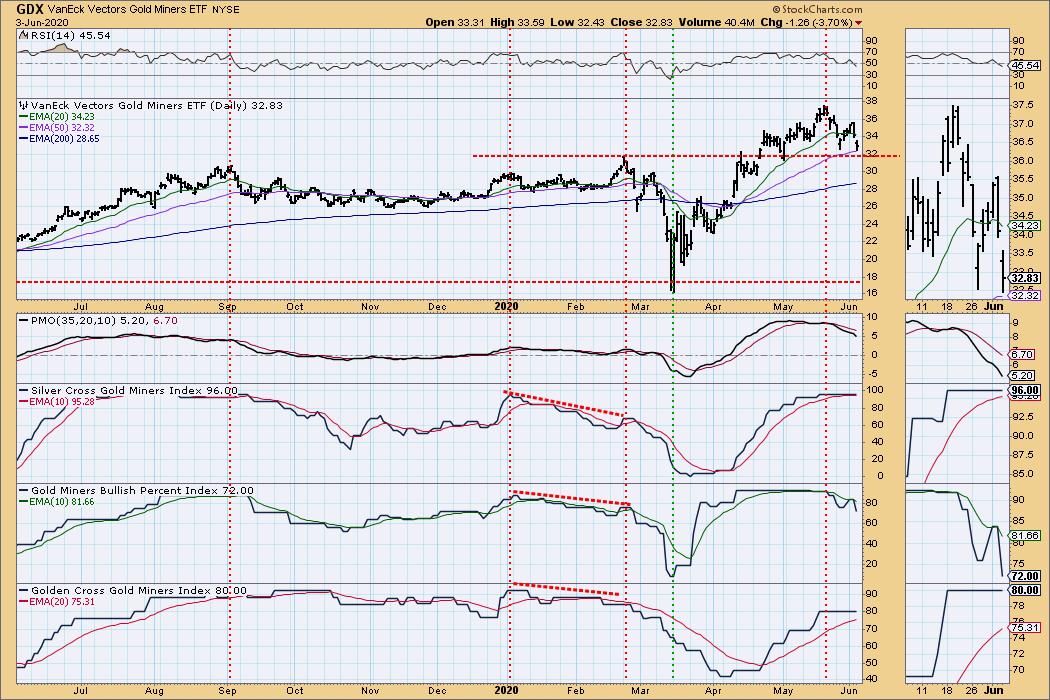 The oil market is under severe pressure due to a lack of demand, and we do not believe that USO is an appropriate investment vehicle at this time. Until further notice we will use $WTIC to track the oil market. Since this is a continuous contract dataset, it doesn't "play well" with our Trend Models, and we will not report Trend Model signals for oil.

$WTIC Daily Chart: Price is making its way into the gap resistance area. The PMO is topping and overbought. The RSI is getting overbought. I didn't expect price to even move into the gap. I still don't have high hopes for a gap closure.

TLT Daily Chart: The chart pattern shuffle continues on TLT. I think I finally got it right this time with a bearish descending triangle. Today's gap down executed that pattern. The PMO reached negative territory. The RSI is declining below net neutral, but isn't particularly oversold. I would look for more decline. 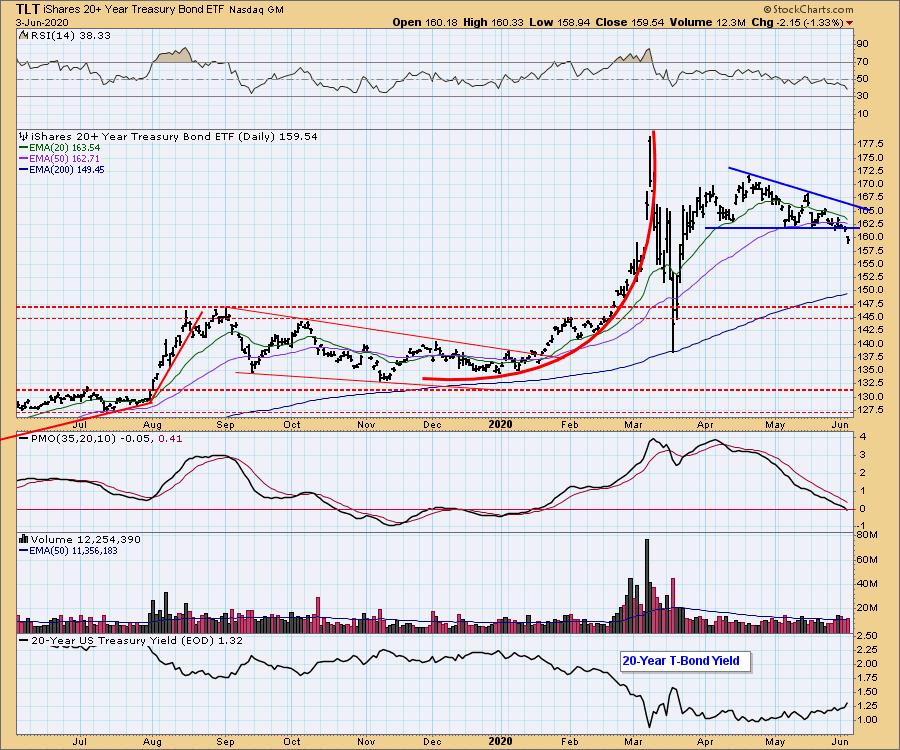 Have you subscribed the DecisionPoint Diamonds yet? DP does the work for you by providing handpicked stocks/ETFs from exclusive DP scans! Add it with a discount AND get the LIVE Trading Room for free! Contact support@decisionpoint.com for more information!

Erin Swenlin will be presenting at the The MoneyShow Las Vegas August 16 - 20 at Bally's/Paris Resort! You'll have an opportunity to meet Erin and discuss the latest DecisionPoint news and Diamond Scans. Claim your FREE pass here! You can watch online with this pass too!! There will be online events held in May and when I have more information I'll let you know.