DP WEEKLY WRAP: Here's Something for the Bulls

If you're looking for a reason to be bullish, here's a chart that could do the trick. It shows the percentage of S&P 500 stocks that have PMO crossover buy signals, and recently it went from zero to 100% in a short period of time. When an indicator goes from very oversold to very overbought in one swift, smooth, uninterrupted move, it is a very bullish sign. We can see a similar move from the 2018 price low, and, even thought the indicator drops rather precipitously from its high, we can see that the initial thrust launched an impressive rally. Will that follow through be duplicated this time? It could happen, but, as usual, there is no guarantee; nevertheless, this looks like a good start. 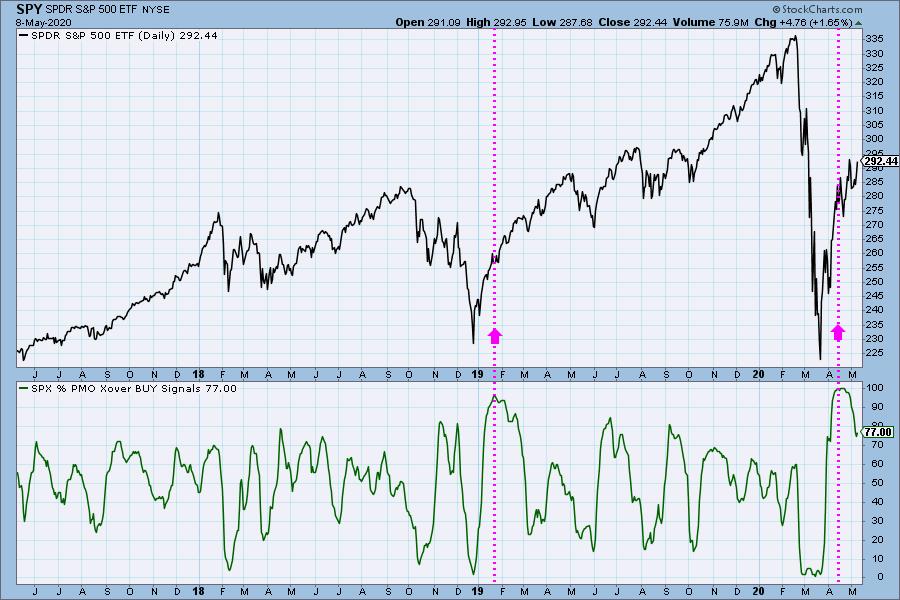 This next chart shows some deeper history, and we can see that similar indicator readings most often result in good price advances. The two failures on the left of the chart were the products of the bear market. 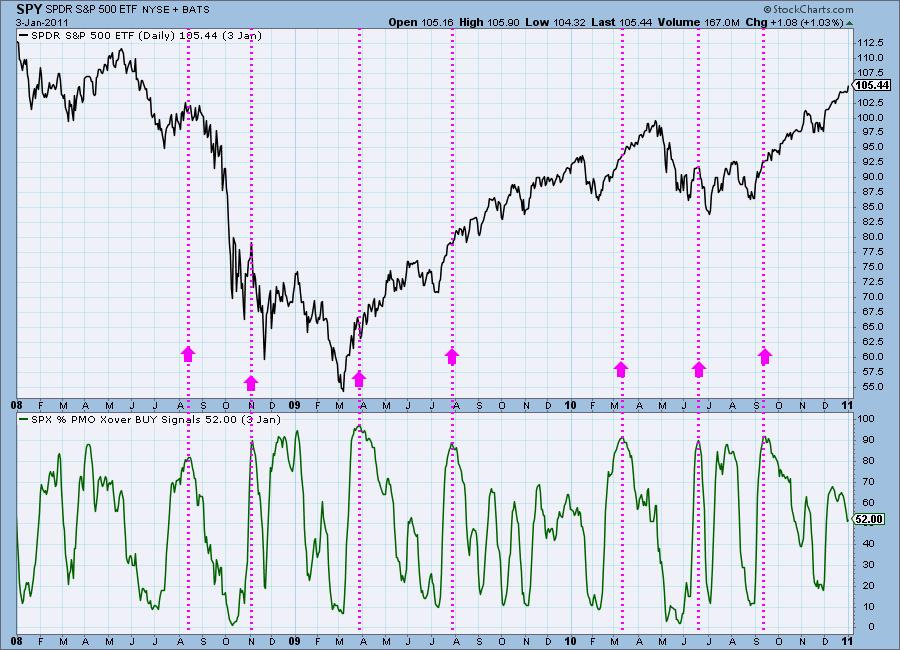 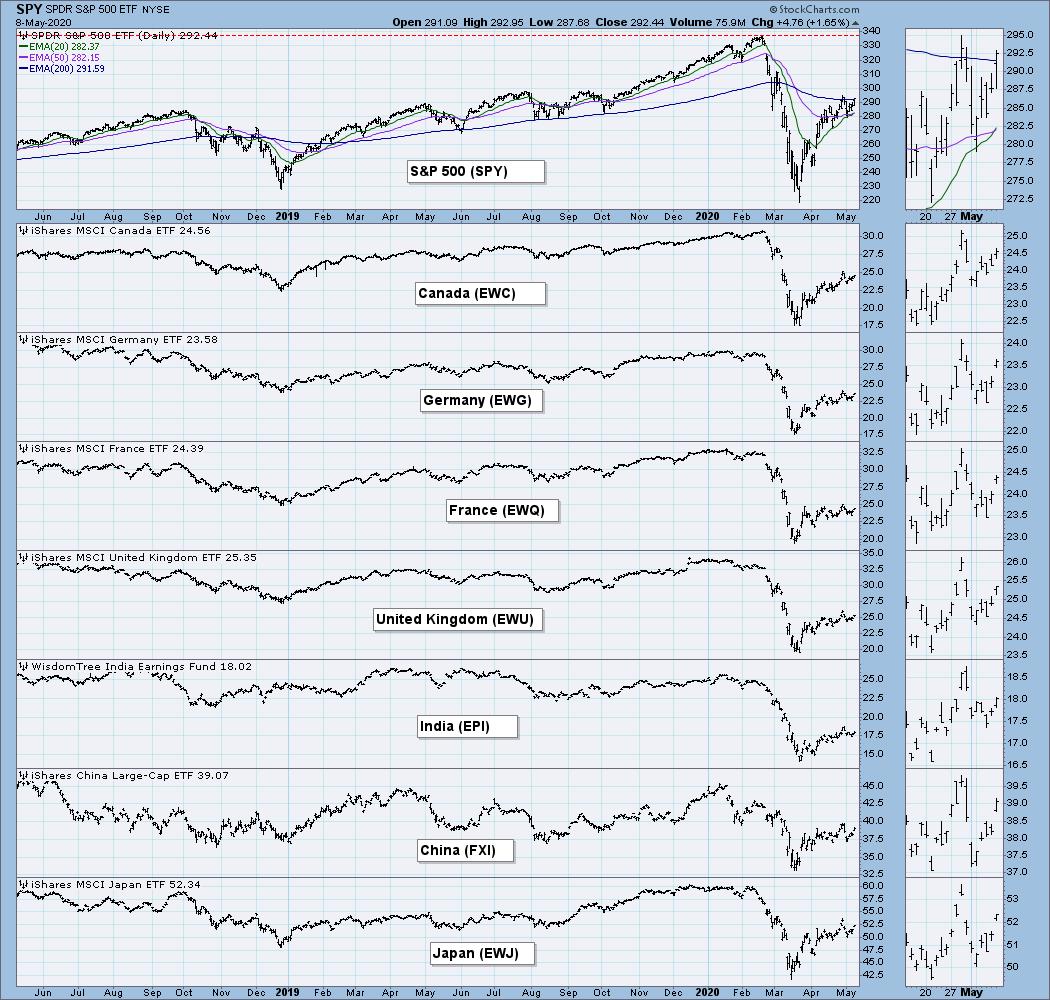 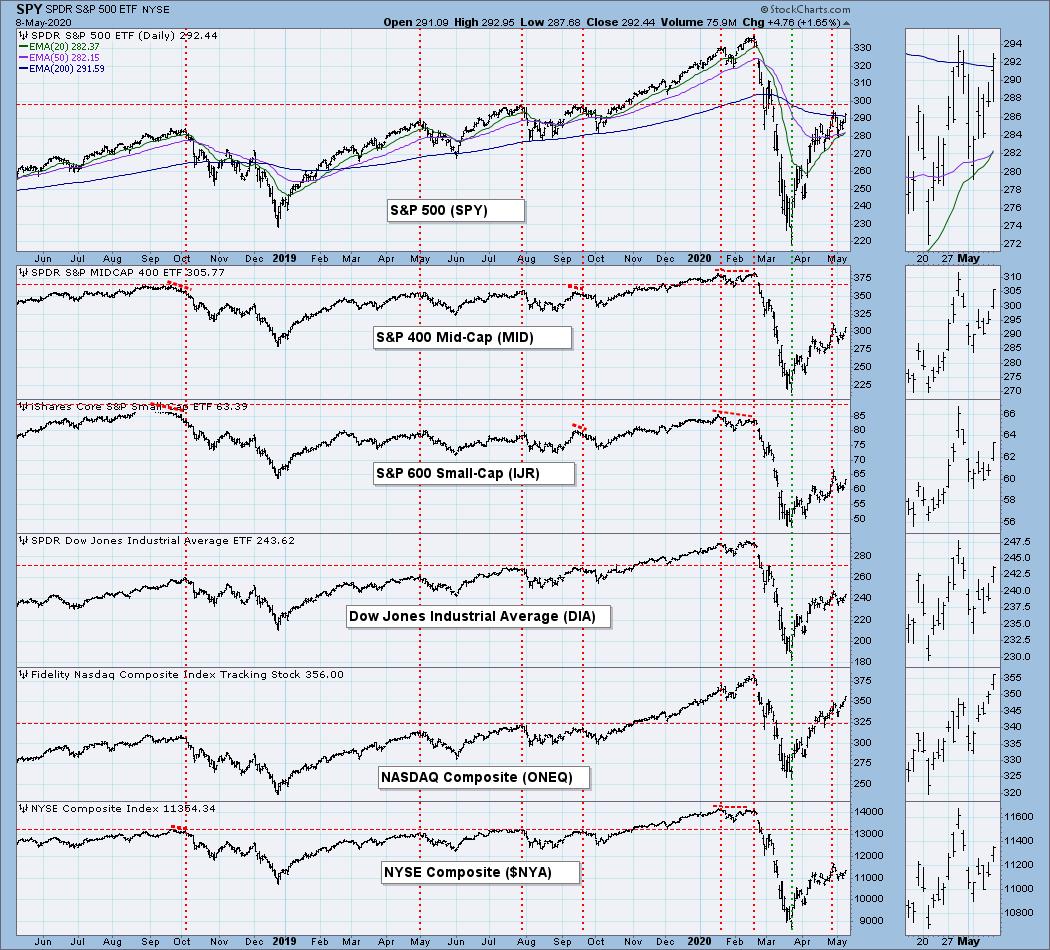 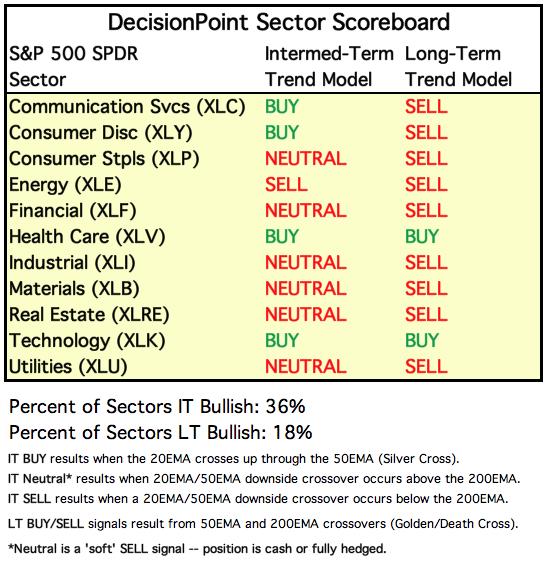 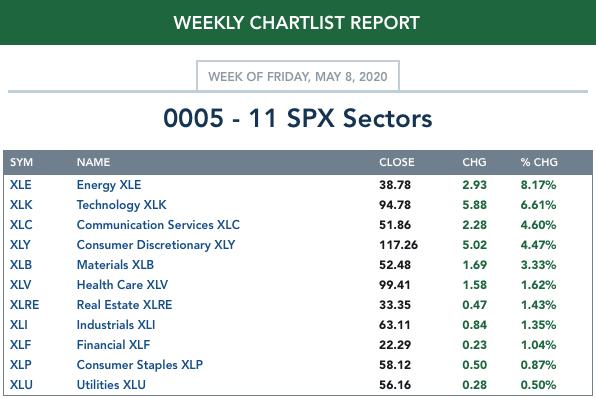 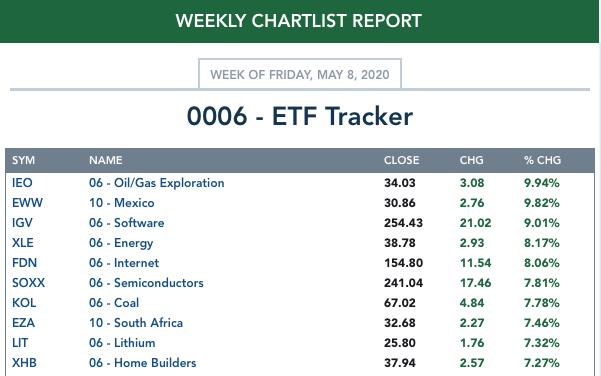 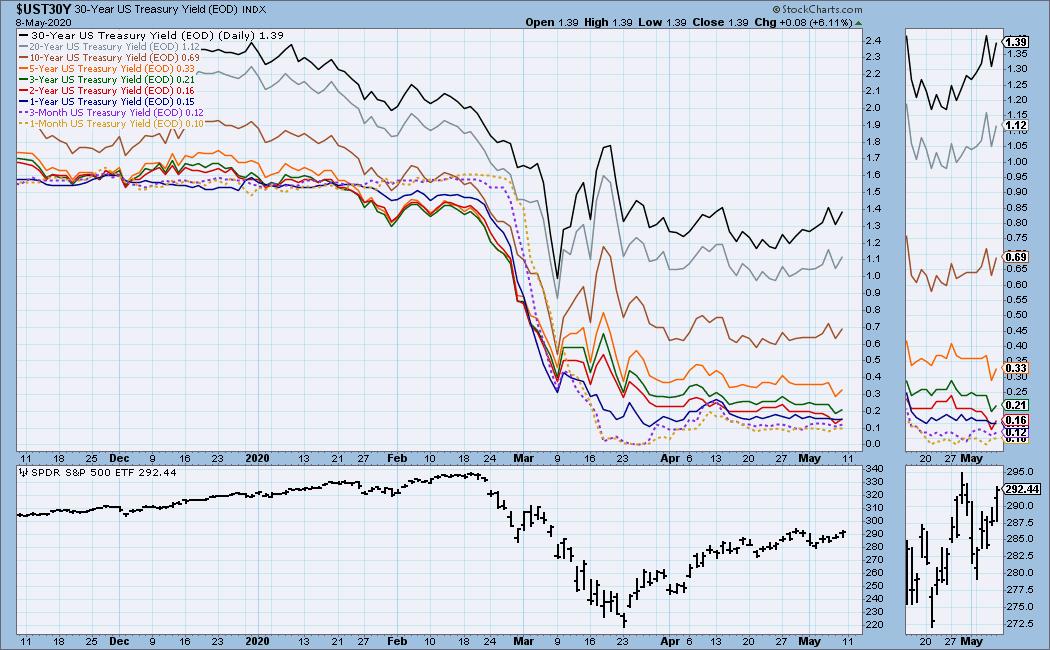 SPY Daily Chart: Today the SPY 20EMA crossed up through the 50EMA, generating an IT Trend Model BUY signal. Sometimes these can be considered action signals, but, with the market having already rallied +35% off the March low, it is more of an information flag confirming the bullish conditions. Price exited the rising wedge last week, and this week Erin identified the rising trend channel. The VIX has hit the upper Bollinger Band again, which is an overbought warning.

SPY Weekly Chart: The weekly PMO is struggling off its March bottom, unlike the two prior bottoms on the chart. 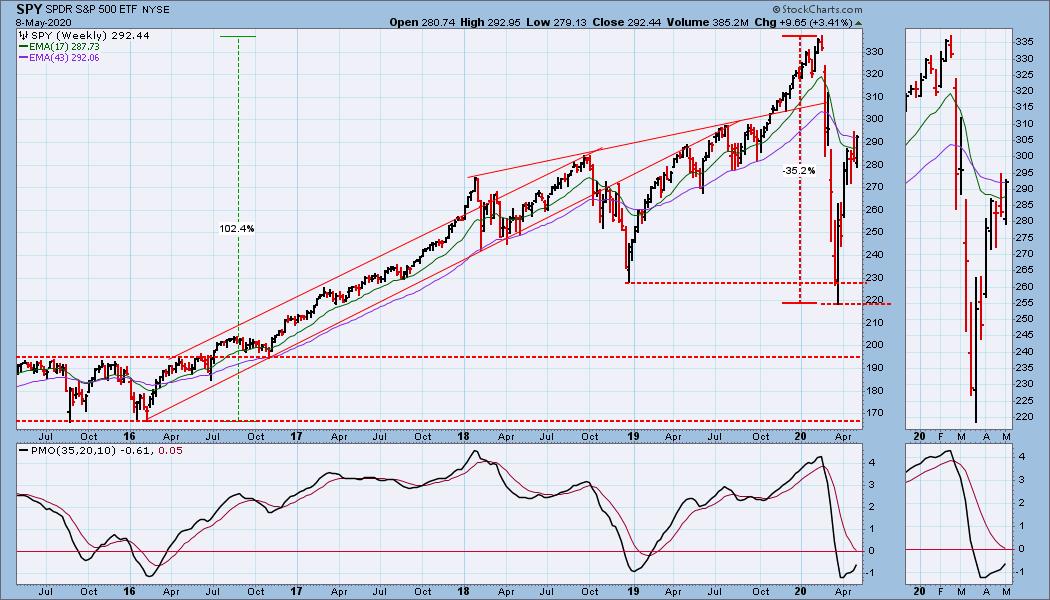 Climactic Market Indicators: We had climactic activity on Friday. Since it occurred after a short advance, it is likely that it is an upside exhaustion climax. The price action in the last three weeks has been choppy, and there have been exhaustion climaxes in both directions. 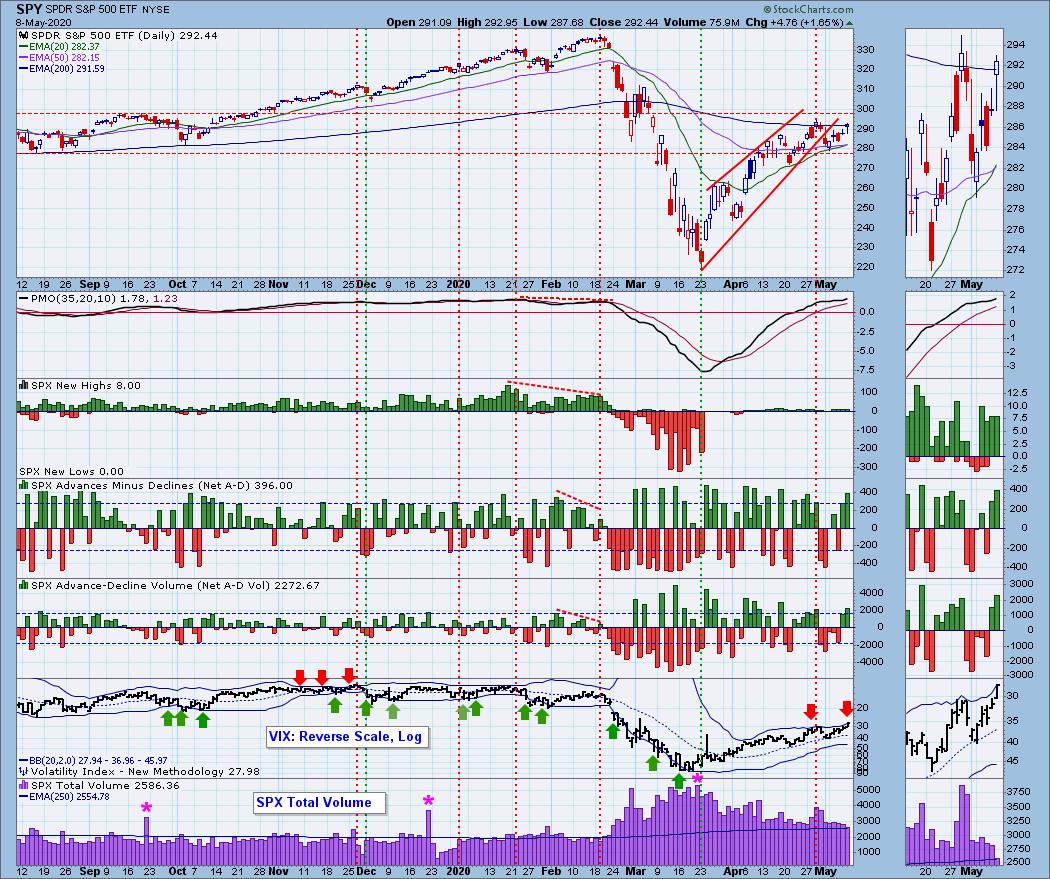 Short-Term Market Indicators: The short-term market trend is UP. The condition is NEUTRAL and rising off this week's oversold low. There is certainly the potential for new rally highs next week. 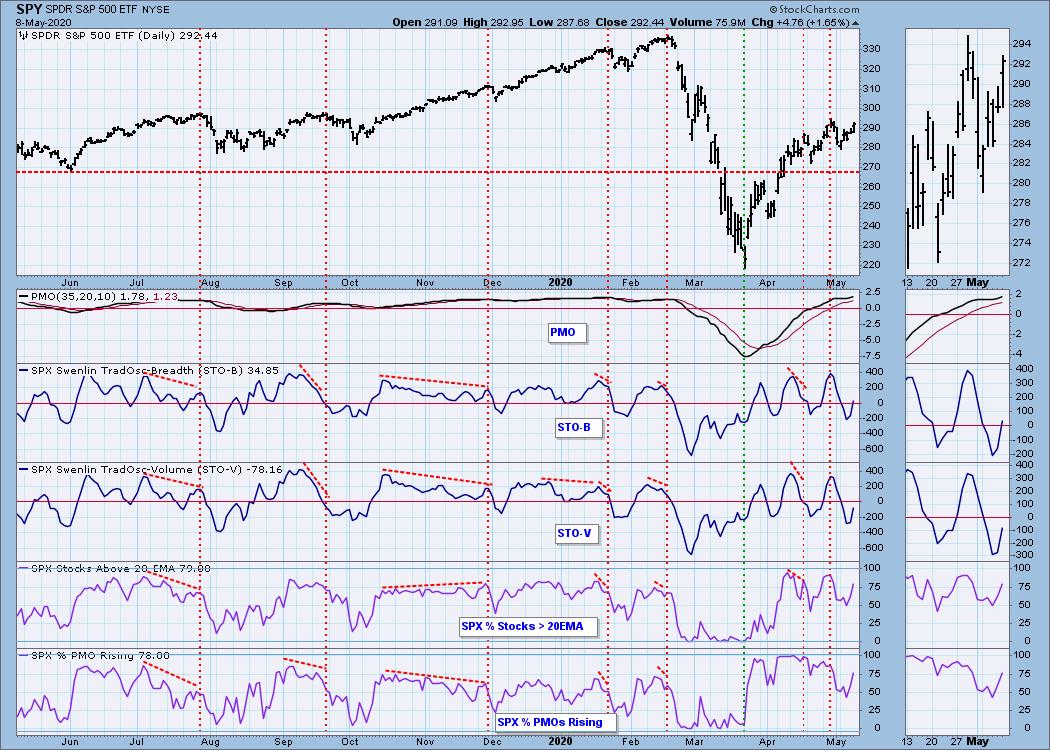 Intermediate-Term Market Indicators: The market has rallied +35%, but the Golden Cross Index still languishes in the low 20s. When we look at SPY, it is obvious that it will be some time before a Golden Cross (50EMA > 200EMA) is experienced there. SPY had a Silver Cross (20EMA > 50EMA) today, yet only about a third of its component stocks have Silver Crosses. The Bullish Percent Index is about -25% lower than it was at the mid-April peak. 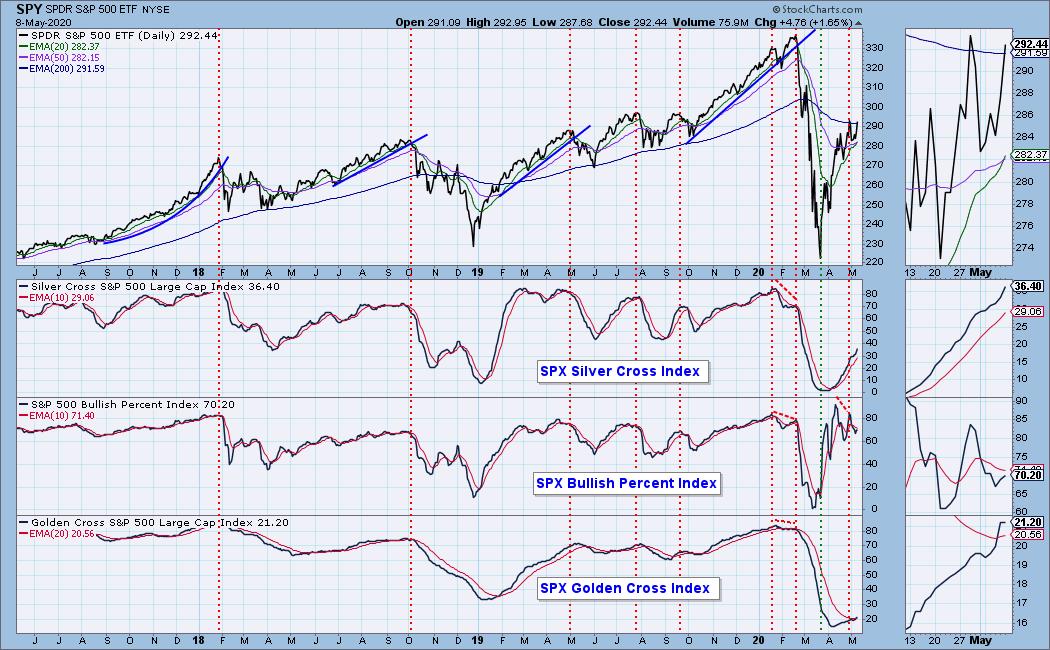 The intermediate-term market trend is UP and the condition is OVERBOUGHT. Some time ago I put a box around part of the rally from the 2018 low, because it highlights the kind of internal surge I discussed in my opening comments. Comparing it to the rally off the march lows we see that the recent PMO and Percent of PMO BUY Signals are much stronger; however, the recent ITBM and ITVM moves are not as robust as their predecessors. 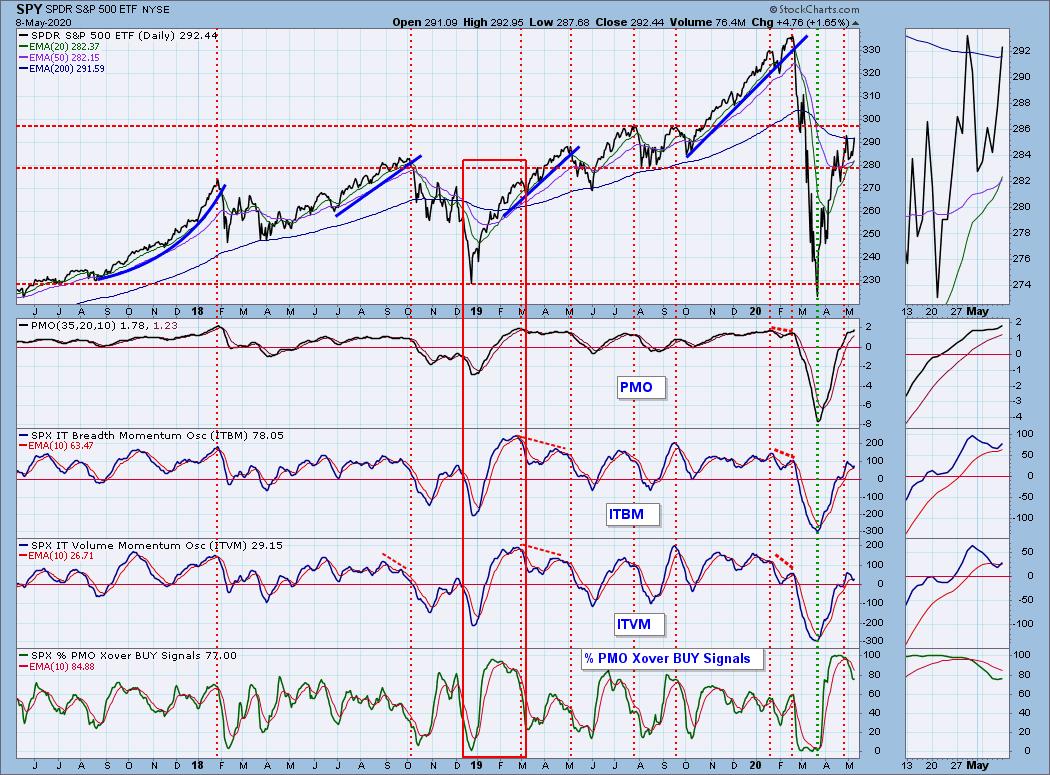 FUNDAMENTALS: In our StockCharts TV show this week, Erin and I discussed John Mauldin's comment that over 100 of the S&P 500 components probably will not be there in 12 to 18 months. He didn't say why, but I presume that most of them will be going into bankruptcy. There are two kinds of bankruptcy we'll be concerned with: Chapter 7 (liquidation) and Chapter 11 (reorganization). We're already beginning to see some Chapter 7s, which basically signals the end of the company, but I believe that most will be Chapter 11s, wherein debt is reorganized and new payment schedules established by the court. This is a good thing in that creditors stand to recoup some or all of what they are owed. It is a bad thing in that payment is substantially delayed, and the creditor's cash flow is severely crimped. Some day they'll see that money, but it is not going to keep them from sinking now.

To compound the example, we know the airlines are under great pressure. A supplier to the airline industry might be able to cope with, say, Cattle Car Airlines entering Chapter 11, but chances are that supplier deals with other airlines as well, and if several of them also enter bankruptcy, that could be insurmountable. And it is obvious that many other suppliers will be affected as well. And this kind of thing can go on like dominoes, and it will extend way beyond the airline industry.

My apologies for bringing up fundamentals, but it is something that can't be ignored, and it bears heavily on our ability to recover from this disaster.

The market continues to behave as if we're in a normal bull market circumstance, but we're not. Investors are behaving as if the huge dislocations with which we are currently dealing, and those many that are coming down the pike, just don't matter. But they do. Unwinding this mess is going to be long, hard, and expensive. Eventually, the realization will hit, and that won't be a pretty day.

Next week is options expiration, so expect low volatility toward the end of the week -- usual, but not guaranteed.

UUP Daily Chart: I think the wide swing in March is an outlier and should be ignored. 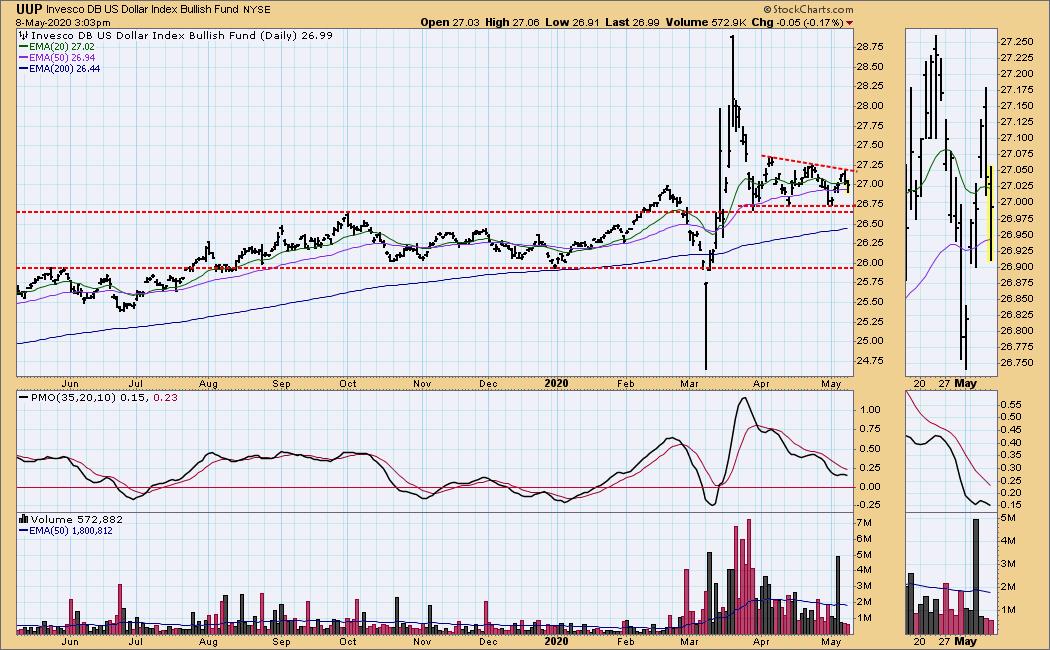 UUP Weekly Chart: The overall trend is more identifiable in this time frame. The weekly PMO is primarily positive and in a sideways (stable) configuration. 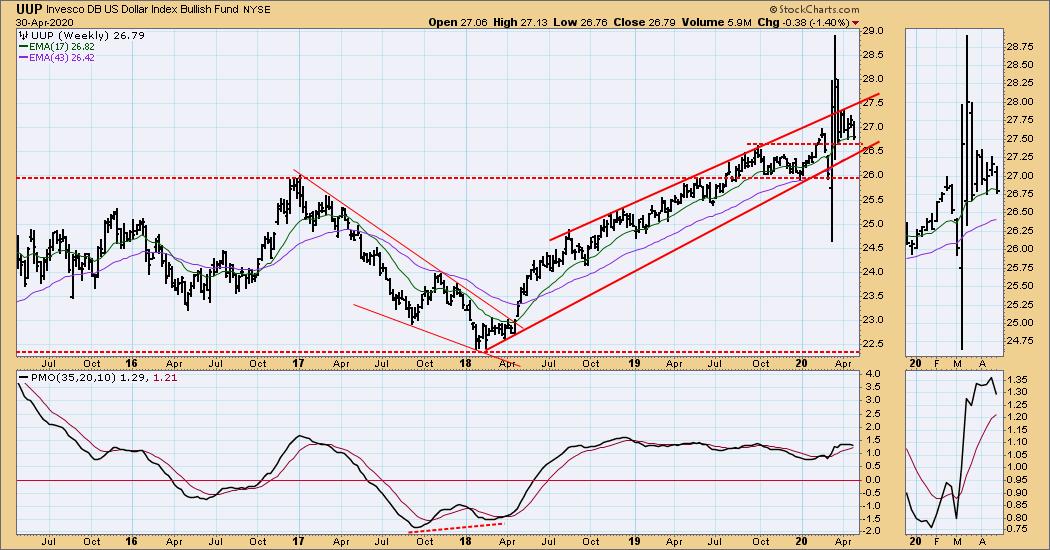 GOLD Daily Chart: The pennant formation still holds, and we should expect an upside resolution soon. Sentiment has been flipping back and forth and is essentially neutral. 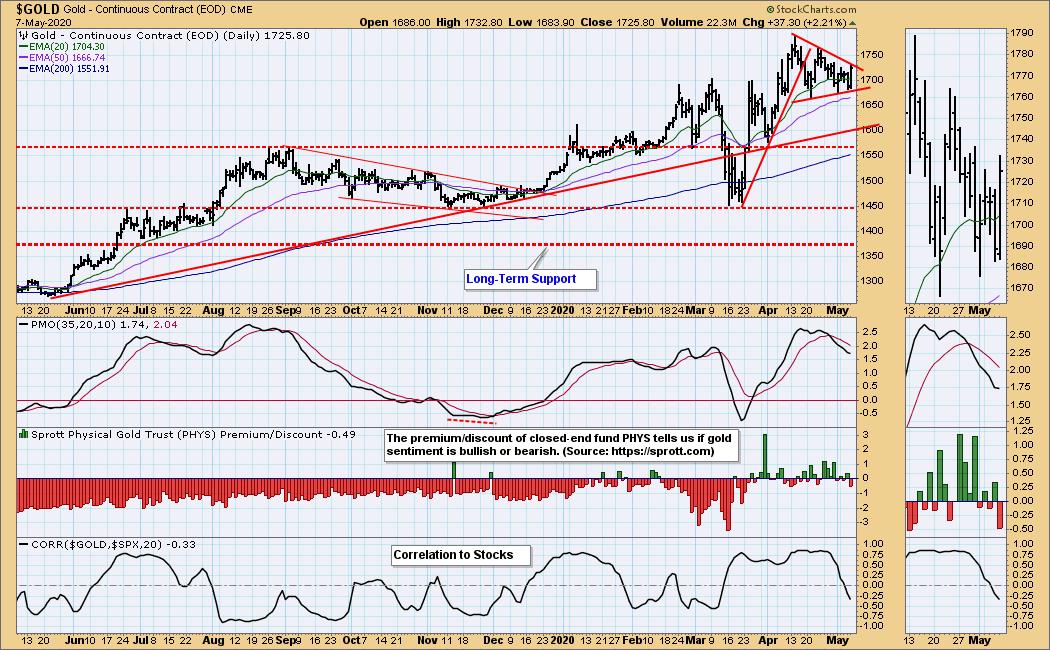 GOLD Weekly Chart: In this time frame gold is in a rising trend, but the weekly PMO is overbought. If price moves back to the rising trend line, some of the overbought condition would be relieved. 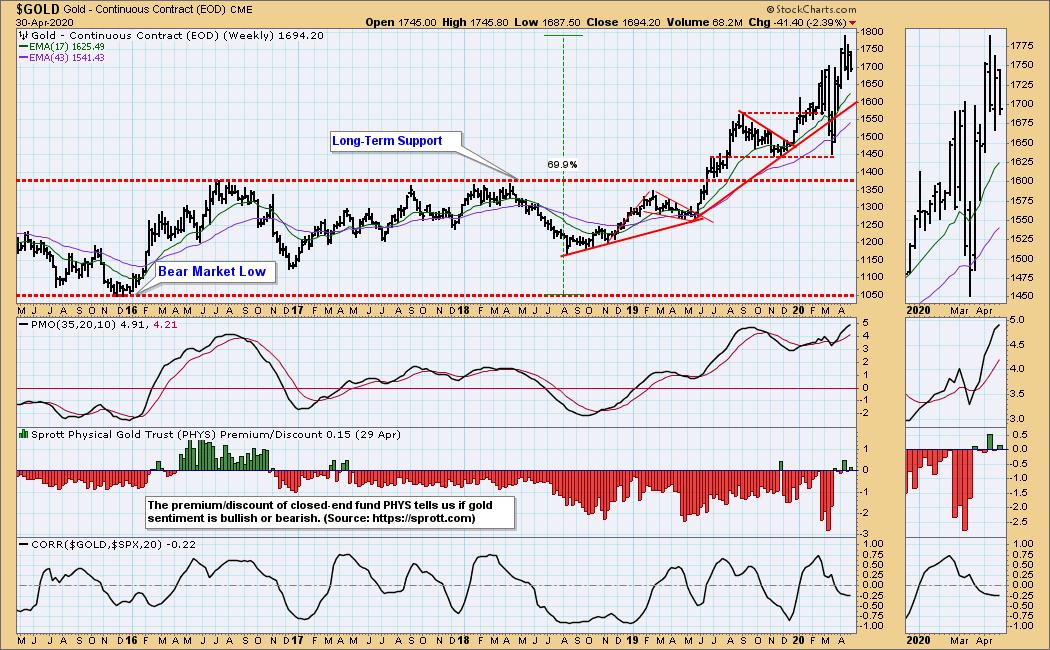 GOLD MINERS Golden and Silver Cross Indexes: Before the March crash, miners were trending up. After the quick upside reversal, it looks as if the up trend is back on track. 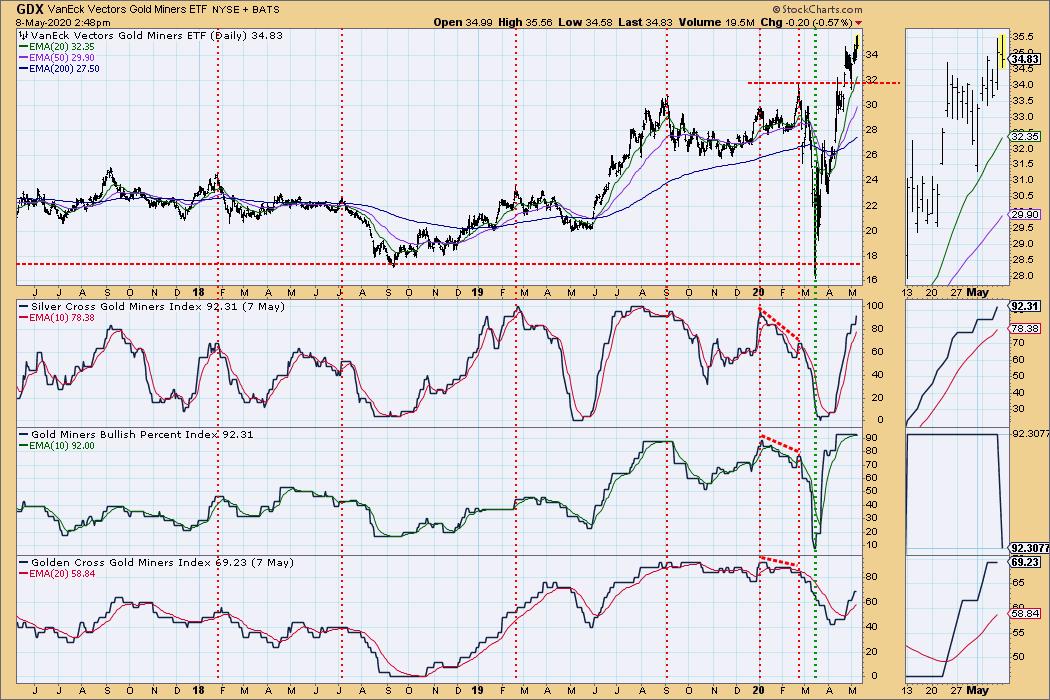 Until further notice we will use $WTIC to track the oil market. Since this is a continuous contract dataset, it doesn't "play well" with our Trend Models, and we will not report Trend Model signals for oil.

$WTIC Daily Chart: With the country opening again, oil prices have stabilized, but there is no major rally in sight. 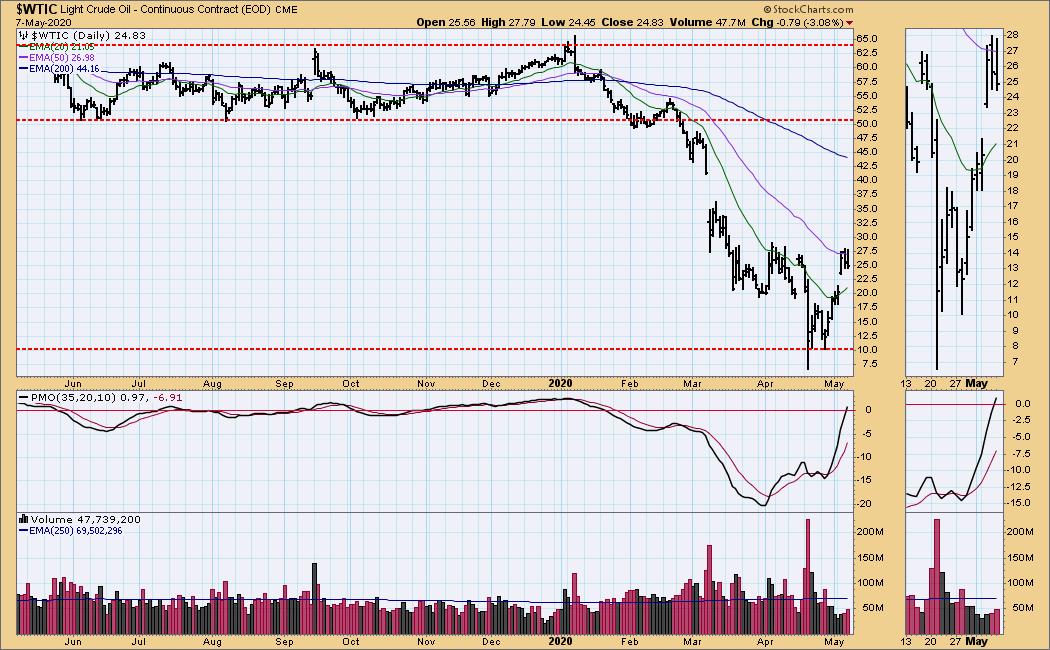 $WTIC Weekly Chart: The weekly PMO is very oversold. That condition will be relieved is price continues sideways. 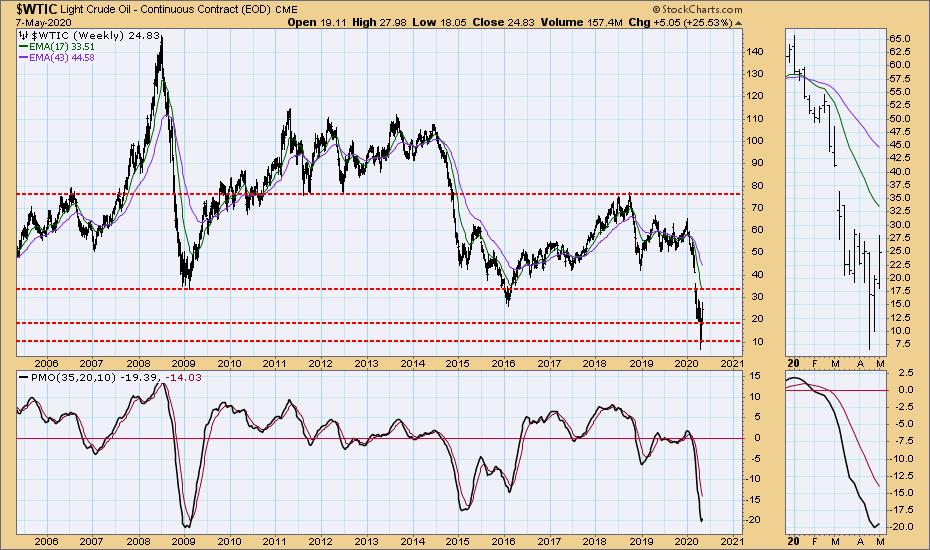 TLT Daily Chart: It appears that interest rates are going to go to zero and beyond, so there is still some upside potential for bonds. 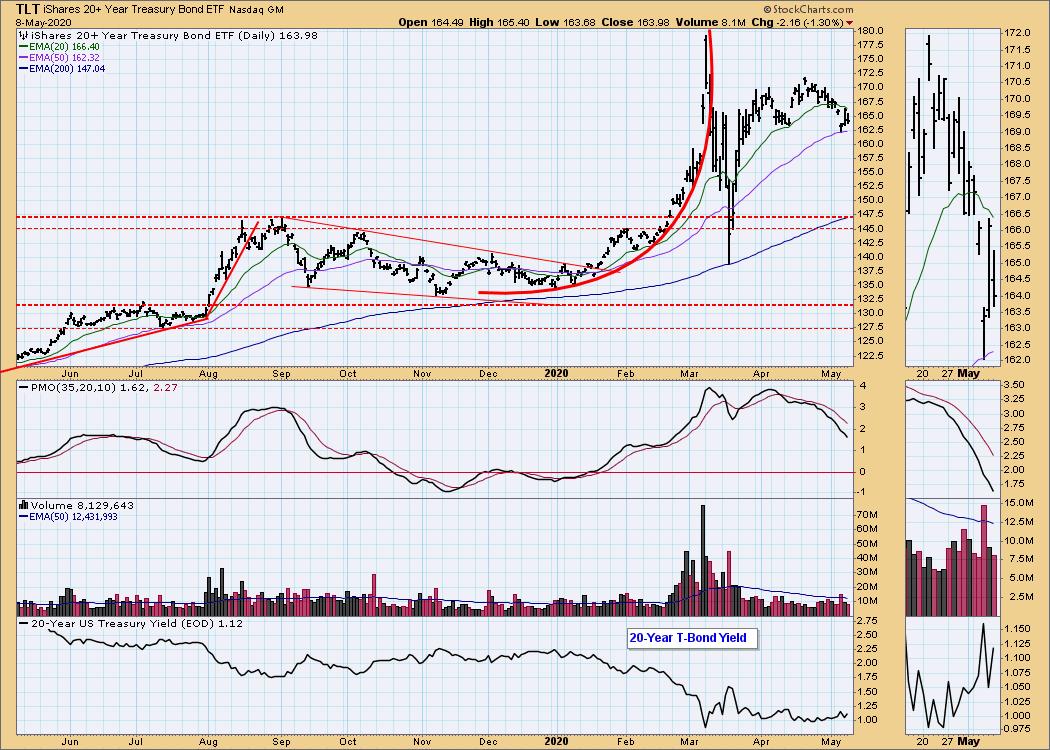 TLT Weekly Chart: The weekly PMO is very overbought, but it will probably go a lot higher before this mess is over with. 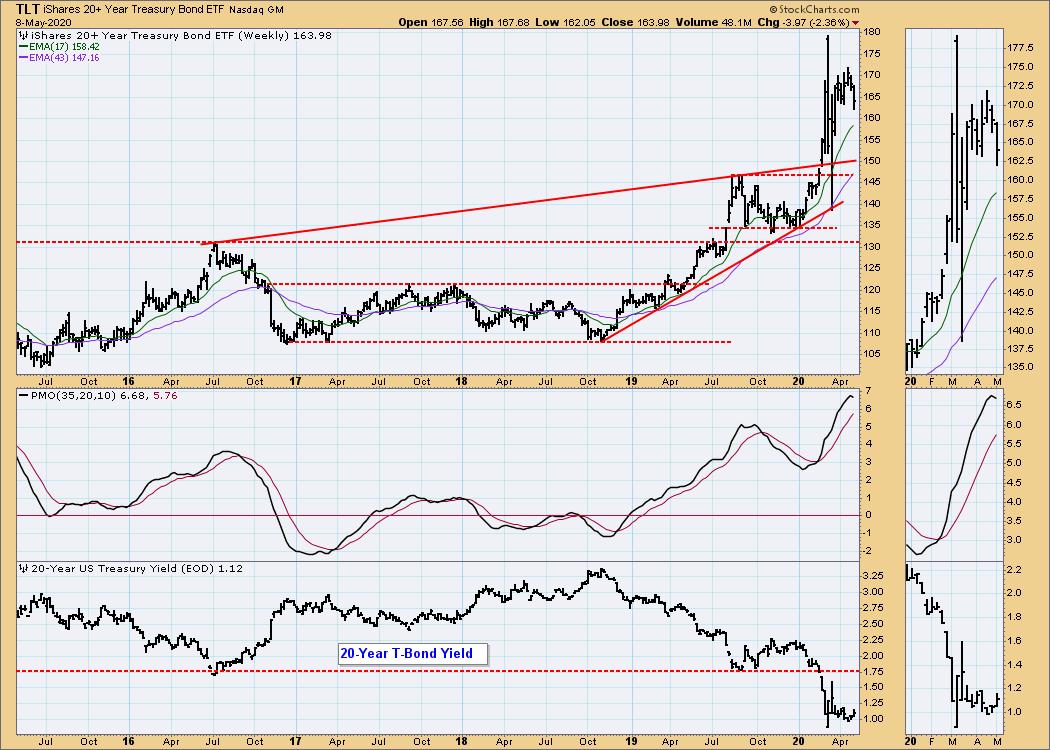