There are times when SPY will out-perform RSP, and vice-versa. There are also times when they will perform about the same. When there is an extended decline, RSP will usually decline faster than SPY. A good example of this is the recent decline from the February price top to the March low, which saw RSP decline -40% versus a -35% decline for SPY. Conversely, at the beginning of important advances, RSP will advance faster than SPY, such as the recent rally from the March low, from which RSP rallied +41% versus +35% for SPY. In both cases the difference is caused by the relative performance of the smaller-cap stocks in the index -- they are more likely to suffer during declines, and more likely to benefit during rallies. 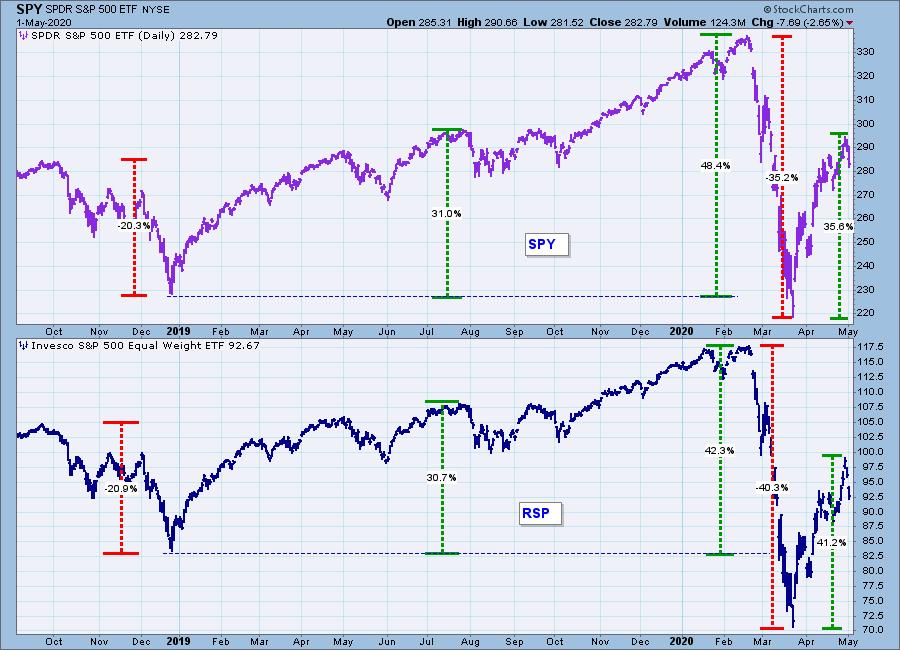 As a bull or bear market progresses, differences in performance tend to abate, such as we can see in the late-2018 decline, and then in the advance from the December 2018 low to the July 2019 top. In both cases SPY and RSP were virtually equal in performance.

Toward the end of a bull market advance, participation begins to narrow and large-cap stocks begin to out-perform smaller-cap stocks. A perfect example of this is the advance from the 2018 low to the February 2020 top. While performance was about equal from December 2018 to July 2019, by the February 2020 top SPY had advanced +48%, and RSP had only advanced by +42%. 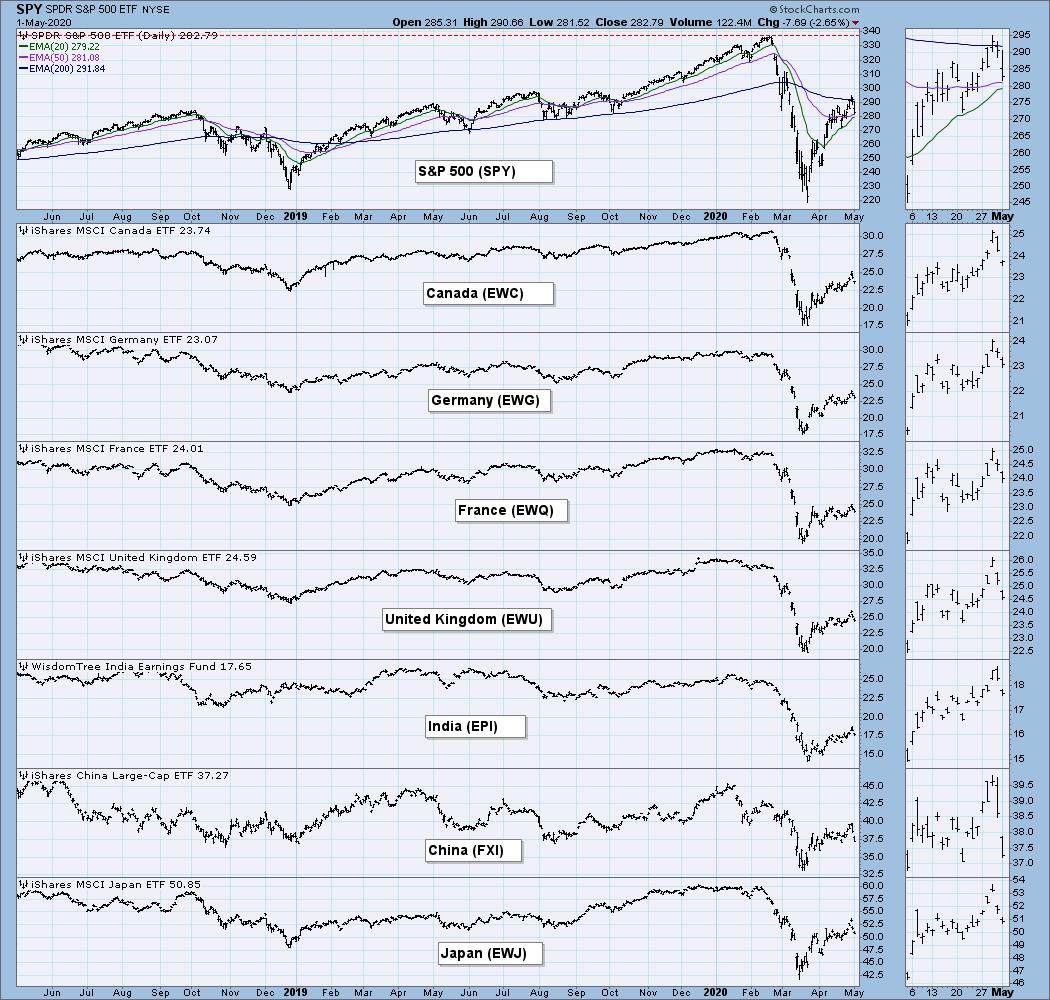 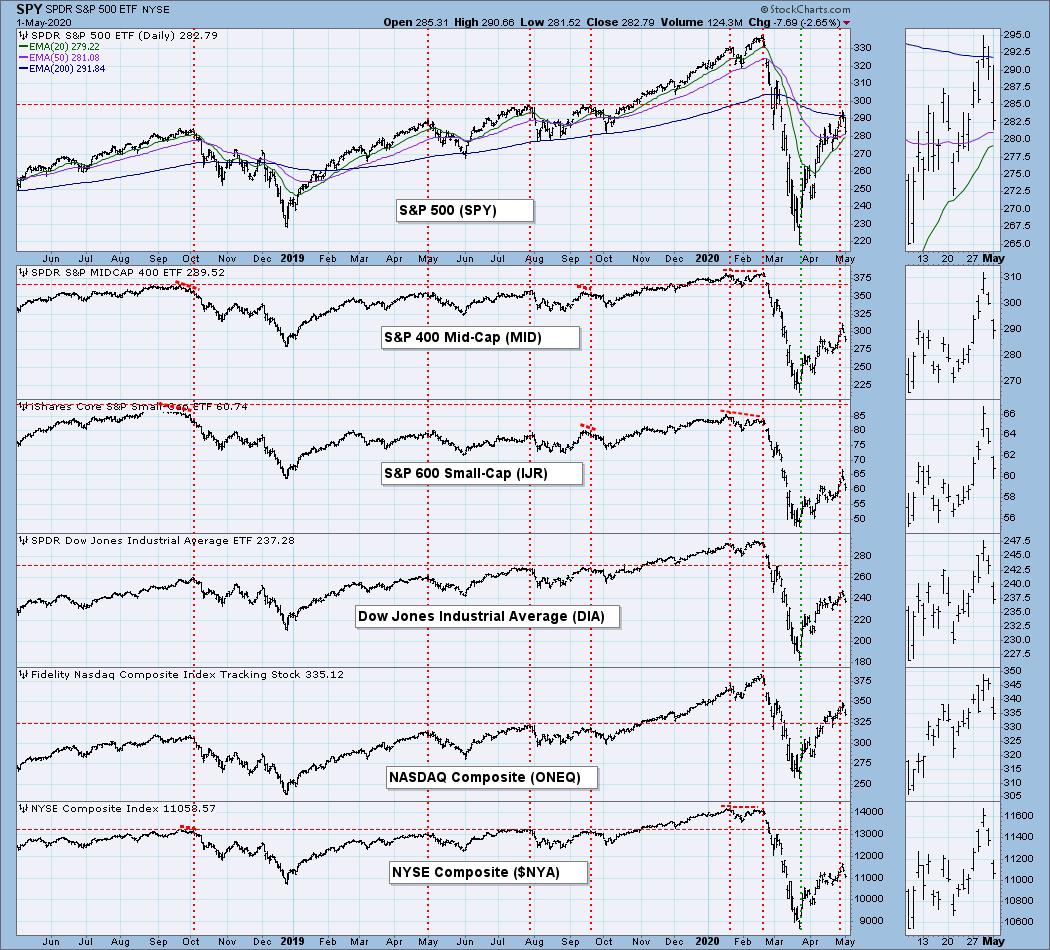 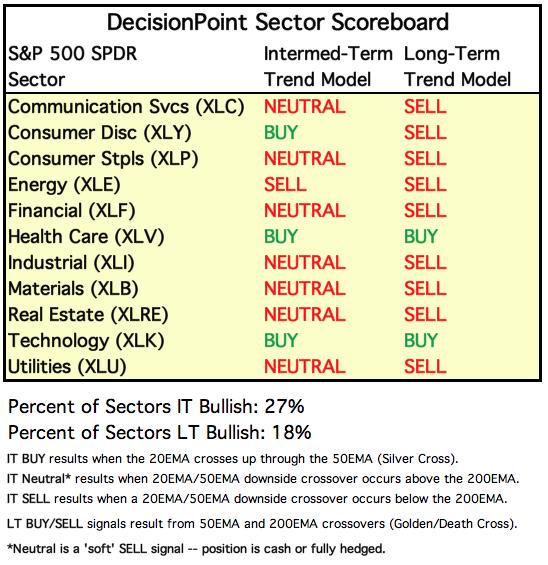 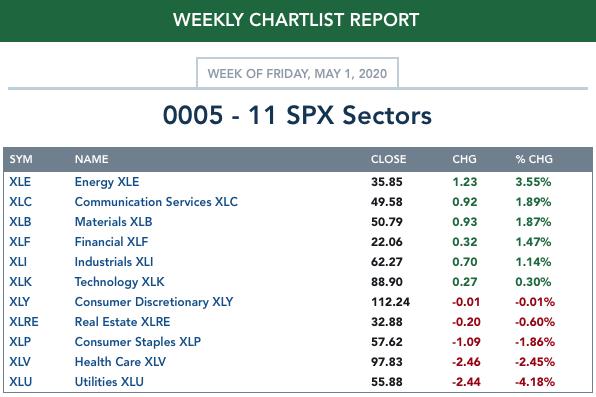 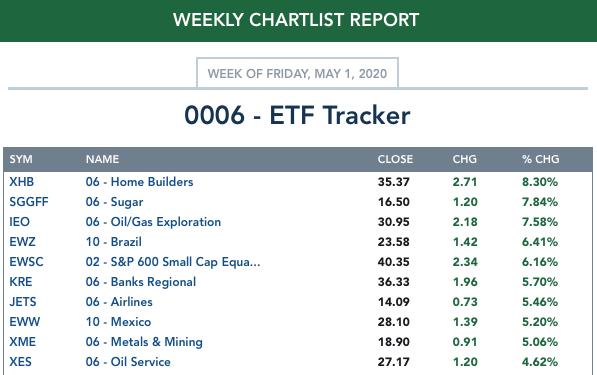 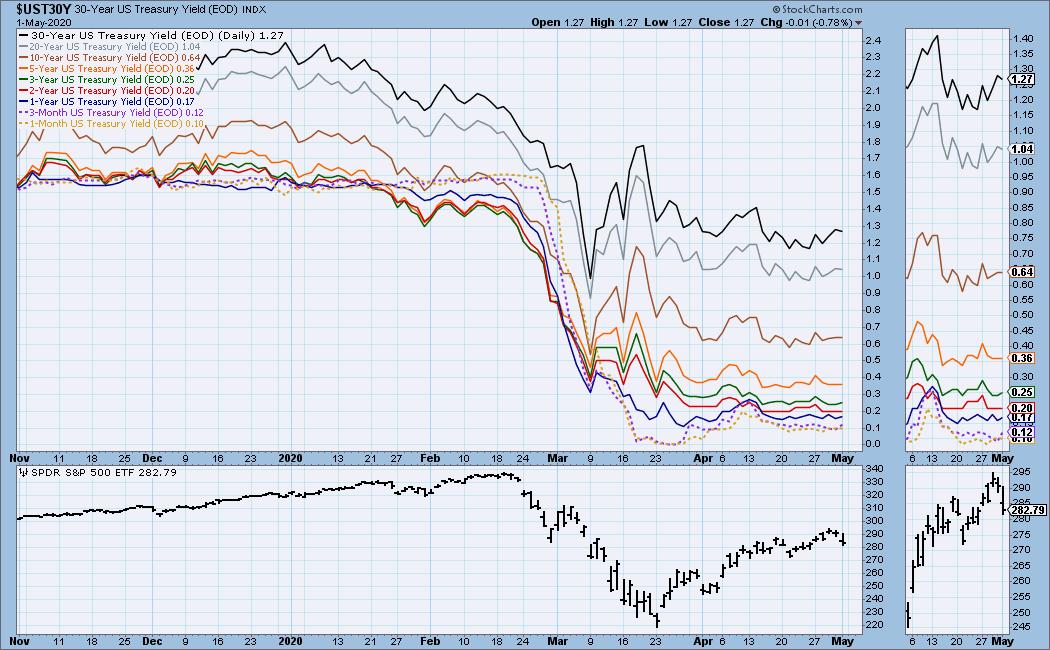 SPY Daily Chart: Two weeks ago the initial rising wedge broke down, then price began squeezing higher along the bottom of the wedge. I redrew the rising trend line, creating a new and improved wedge, and it broke down today. I remarked on to Erin on Wednesday on our StockCharts TV show that the market has been "feeling" somewhat like it did before the crash -- wanting to go up, not wanting to go down. This leaves me wondering if today's decline will prove to be another disappointment to my inner bear.

I should point out how the upper Bollinger Band on the VIX gives an overbought signal when the VIX touches it. It's not infallible, of course, but it is a good attention flag for sure. 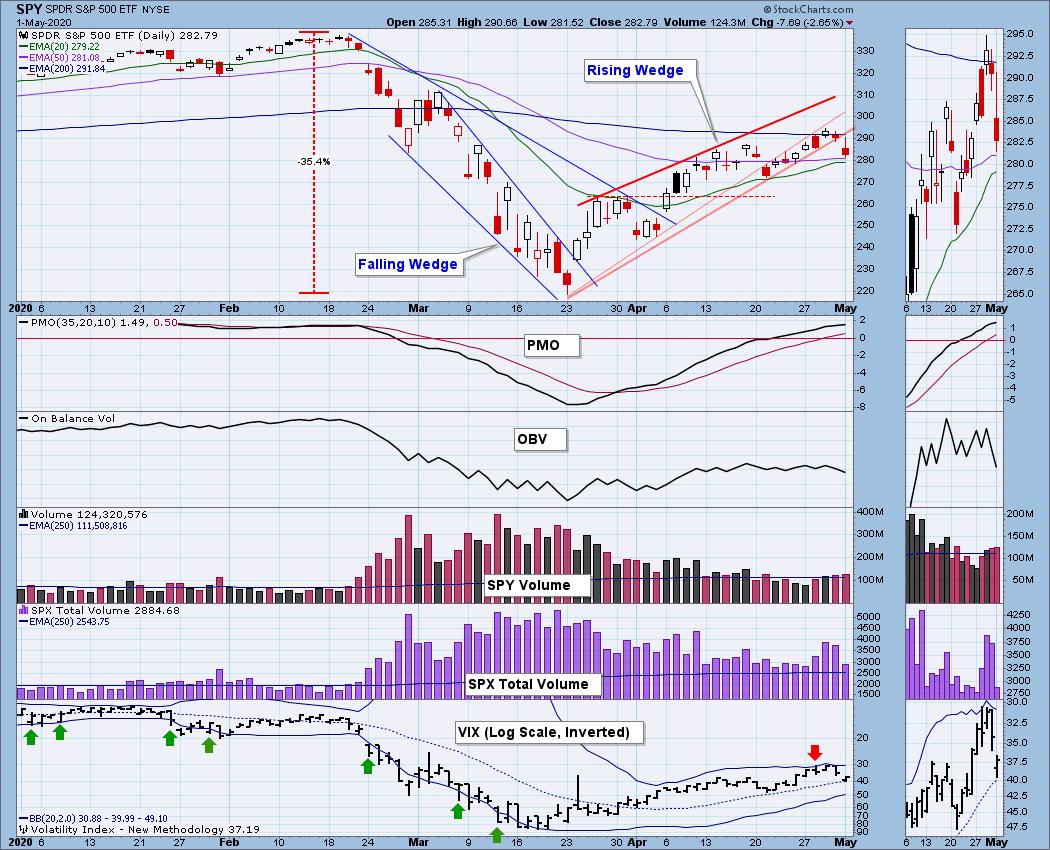 It looks as if the resistance zone is slowing the advance, and there is an OBV negative divergence. 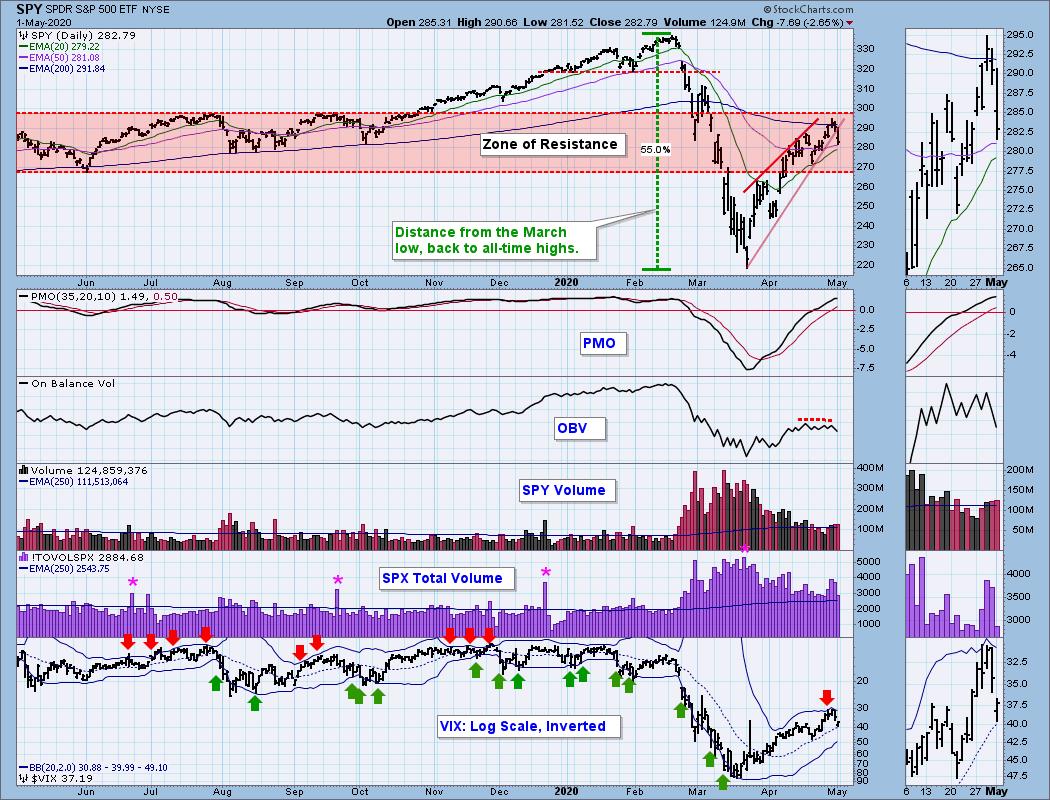 SPY Weekly Chart: What started as a stellar week ended slightly down. The weekly PMO is flattening. If it turns down, that would be very bearish. 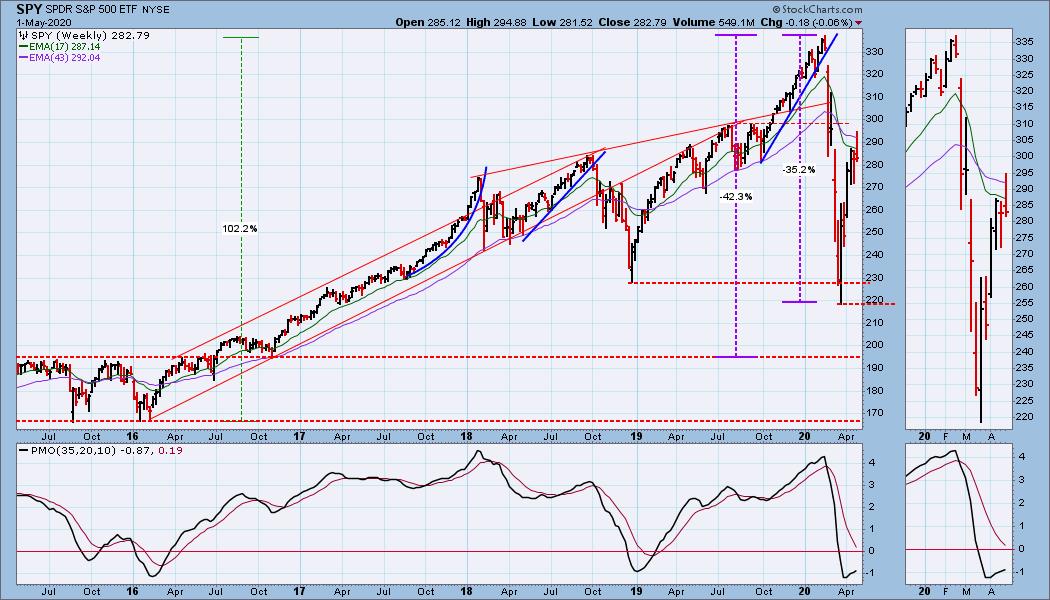 SPY Monthly Chart: Objectively speaking, we have to say that the secular bull market rising trend line has been recaptured. 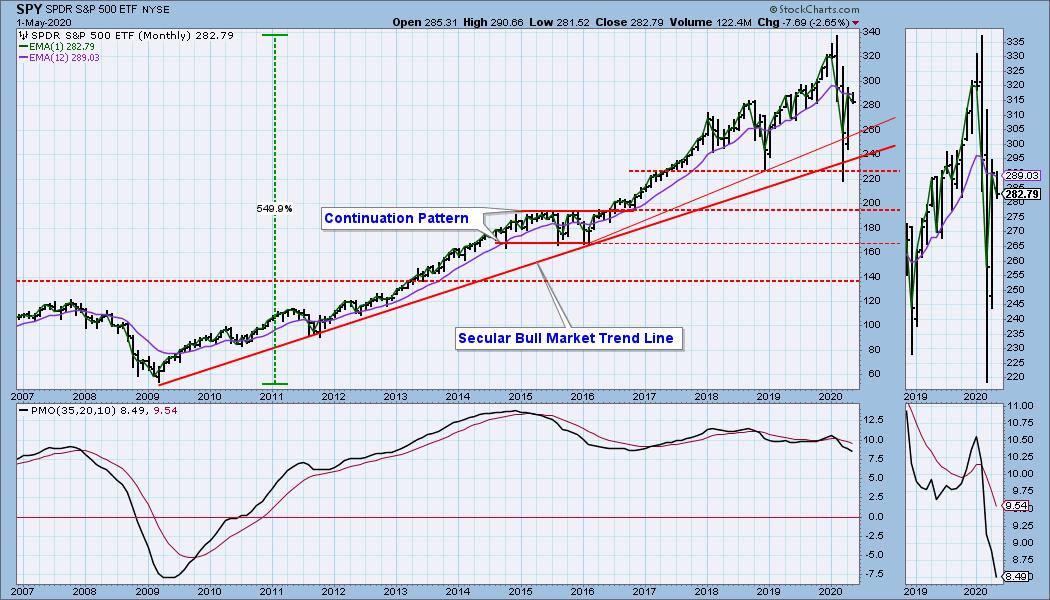 Climactic Market Indicators: There were two climactic down days. Since price was coming off of a top, I'll interpret that as a downside initiation climax. 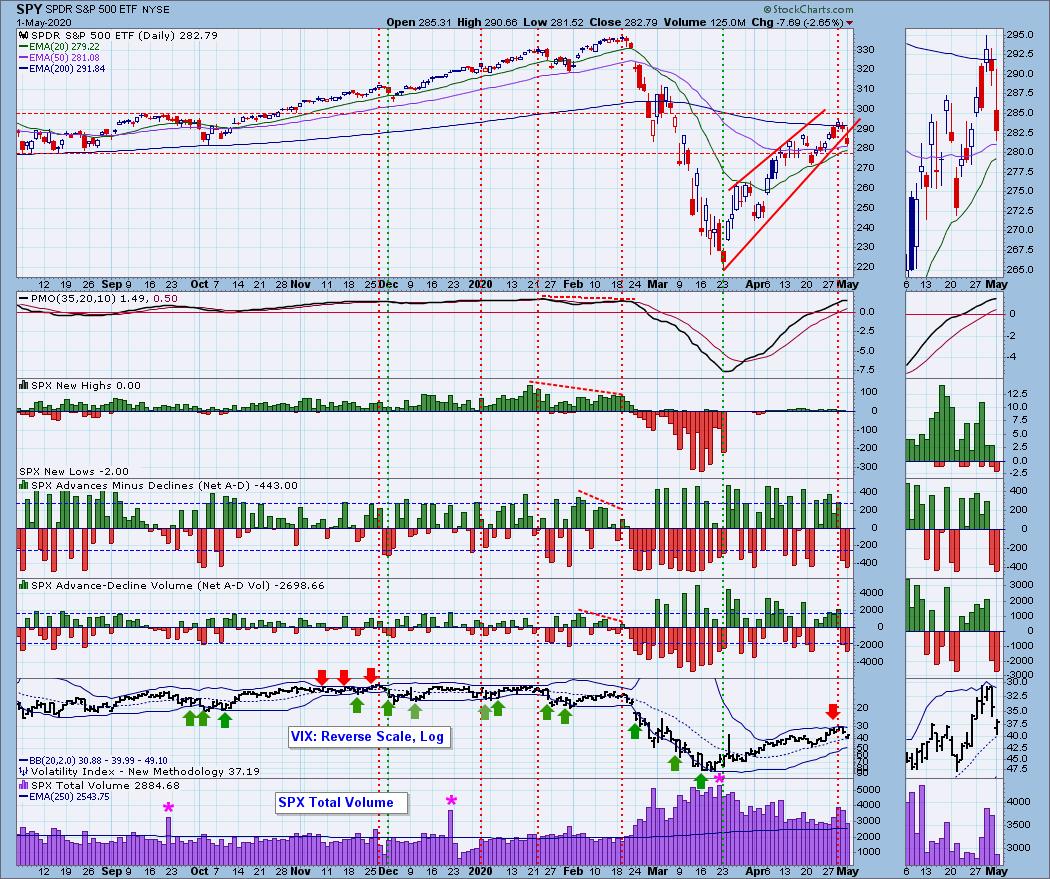 Short-Term Market Indicators: The short-term market trend is DOWN and the condition is OVERBOUGHT. 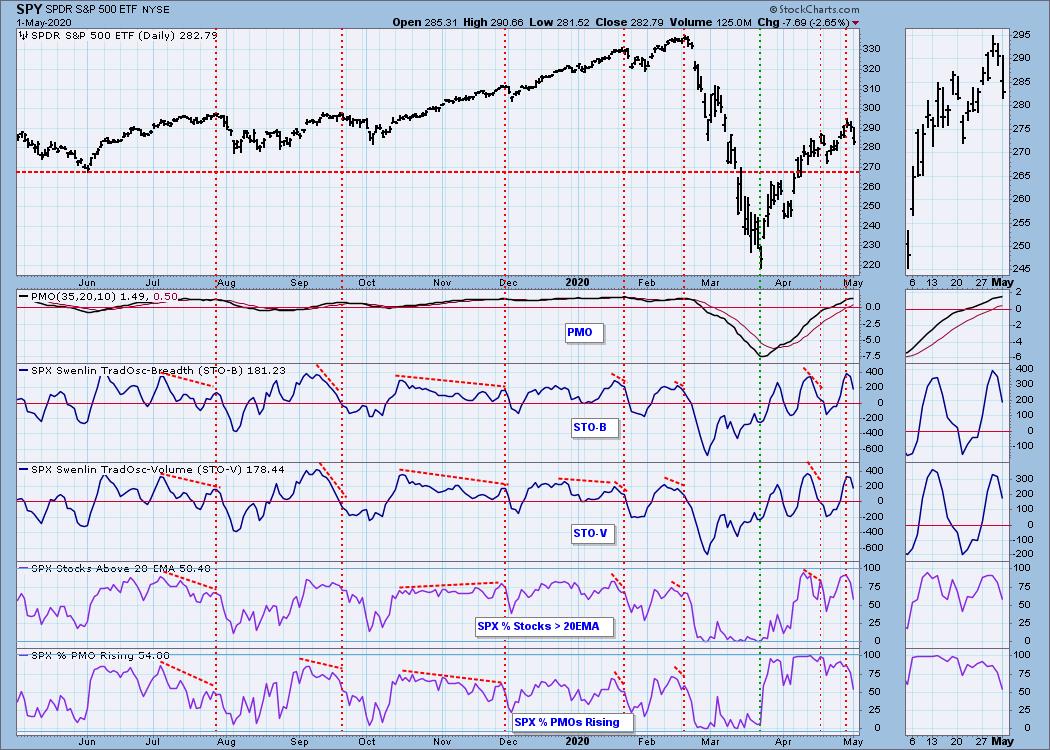 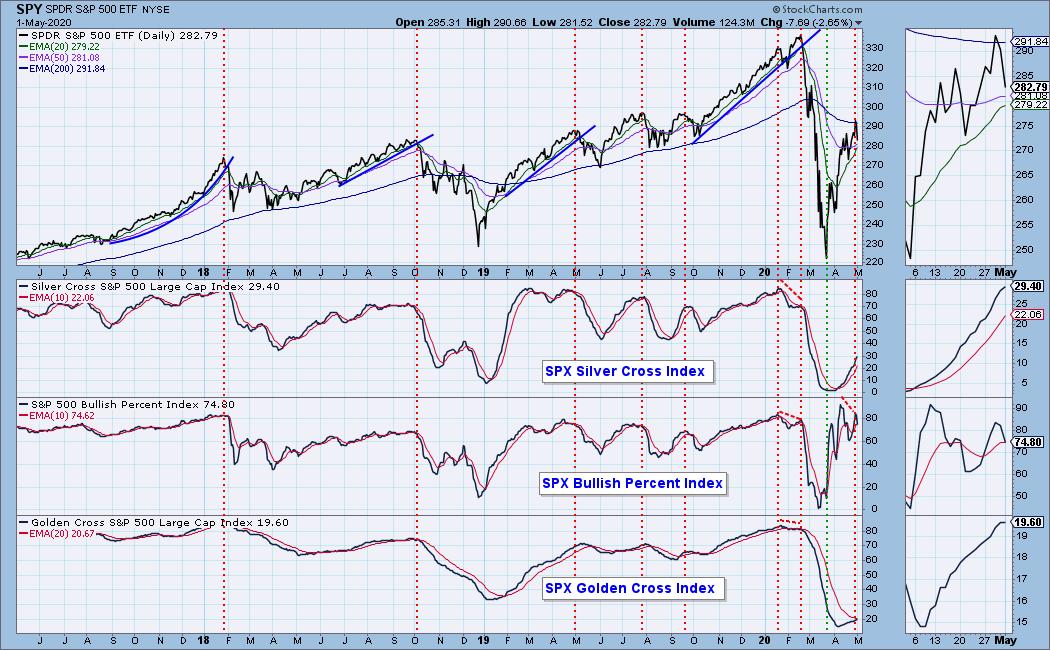 While the intermediate-term market trend is UP, the condition is OVERBOUGHT, and it is probable that a change in trend has commenced. Note that the PMO is near the top of its three-year range and is quite overbought. Based upon the distance traveled from their the March low, the ITBM and ITVM are also overbought, and they topped today. 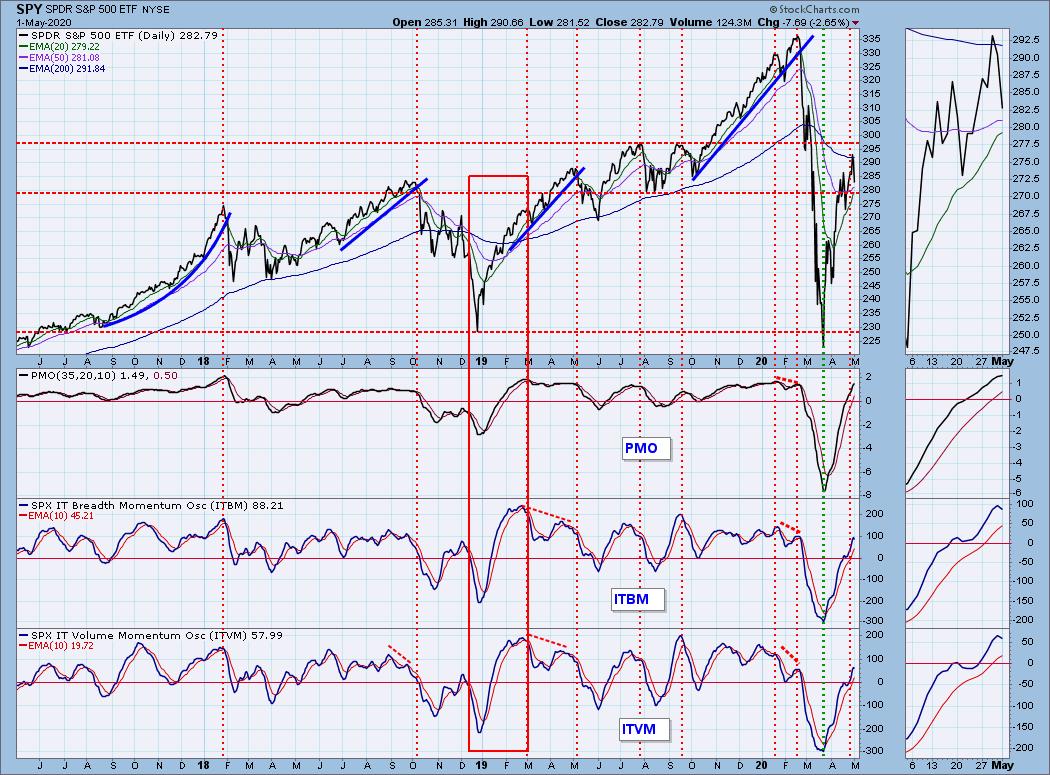 CONCLUSION: As of today, the 6-Month Seasonality will be unfavorable until October 30. With such massively turbulent fundamental forces currently at work, I'm not sure seasonality matters, but, to be sure, it's not going to help the situation.

Earnings for 2020 Q1 are coming in, and for the most part, they do not reflect the problems that rolled over us in April. Investors know that Q2 will be much worse, but they seem to be "looking across the valley" to the happy days on the other side. Standby for the rude awakening.

Short-term indicators are still somewhat overbought and falling, putting them in gear with the overbought intermediate-term indicators, which are just topping. Technically, this is a great bearish setup, and it should be good for more than just a quick pullback.

UUP Daily Chart: I think we need to view the March volatility as an outlier, in other words, ignore it. Price is below the 20EMA and 50EMA, and the PMO is falling. I read this as probable continuation of the weakness. 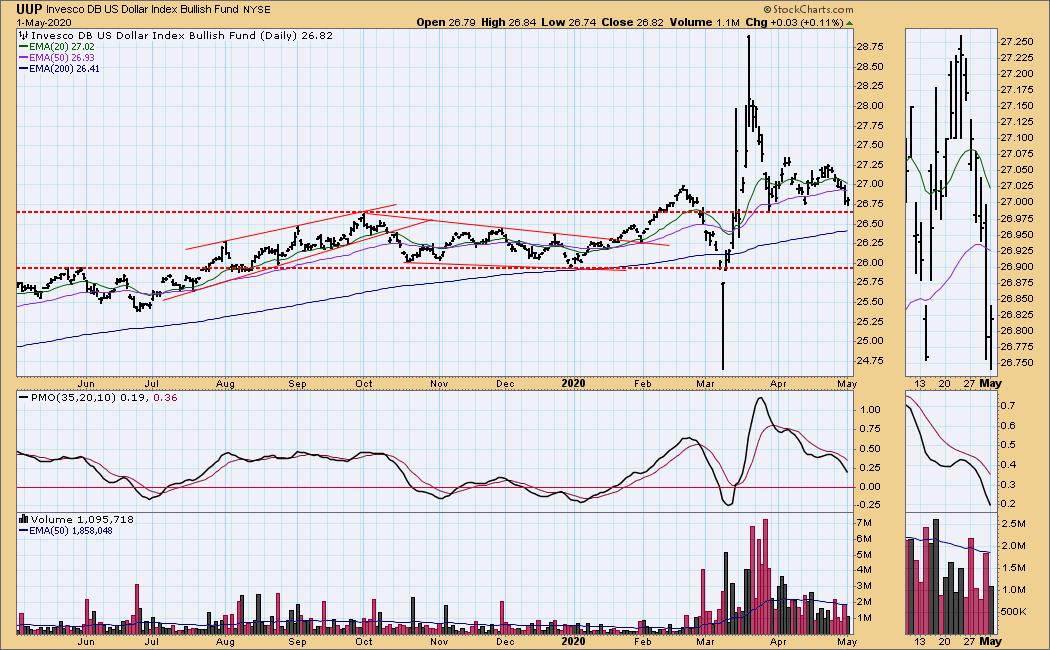 UUP Weekly Chart: The rising trend channel dominates this chart. The weekly PMO is falling, but overall it is moving sideways. 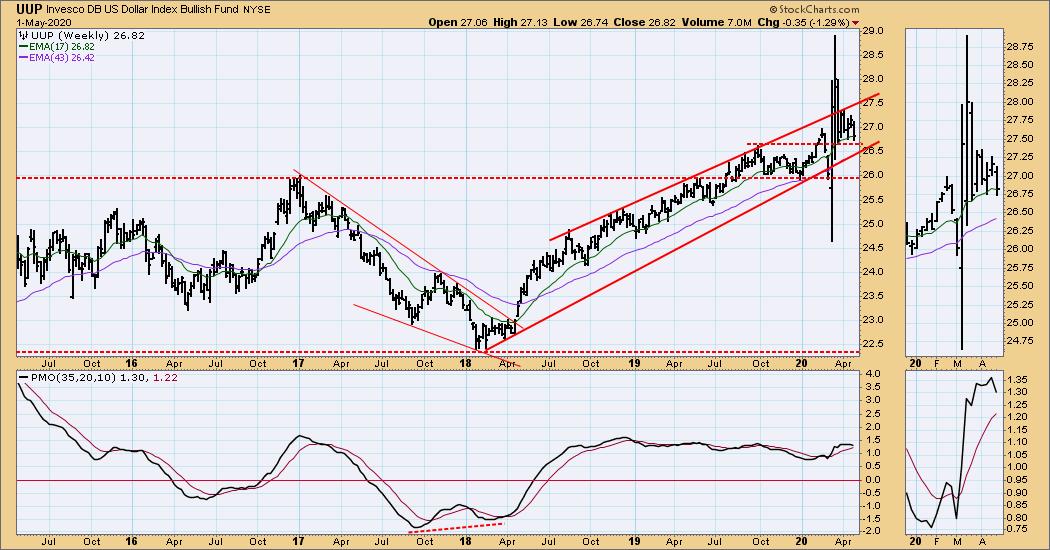 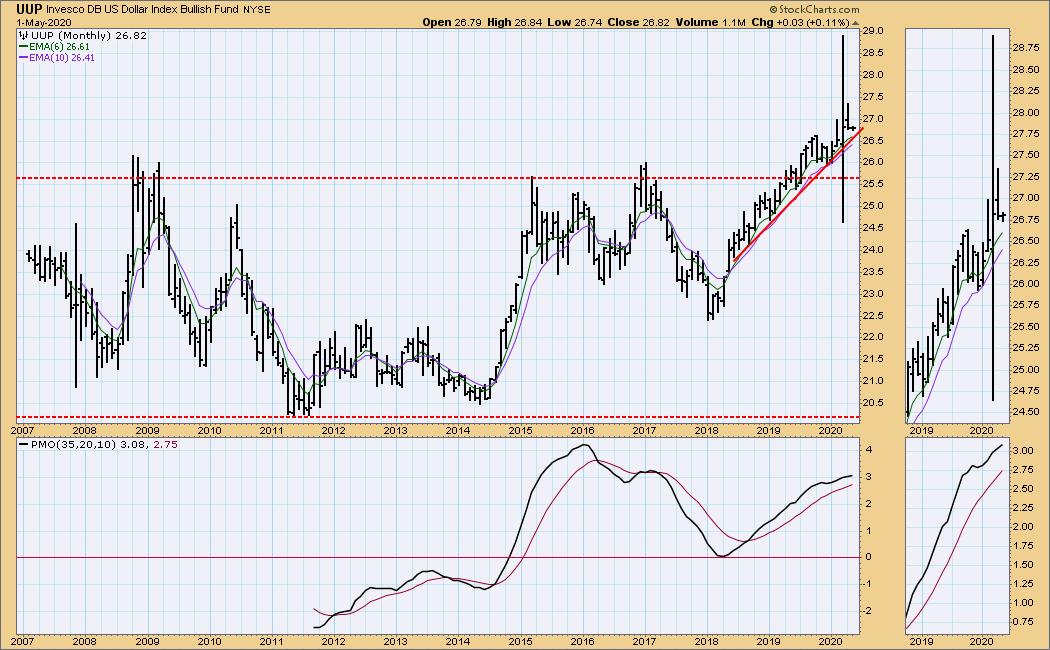 GOLD Daily Chart: The overbought daily PMO has crossed down through the signal line, so some weakness, possibly continued sideways movement will continue for a few weeks. Note that sentiment is becoming more persistently bullish. 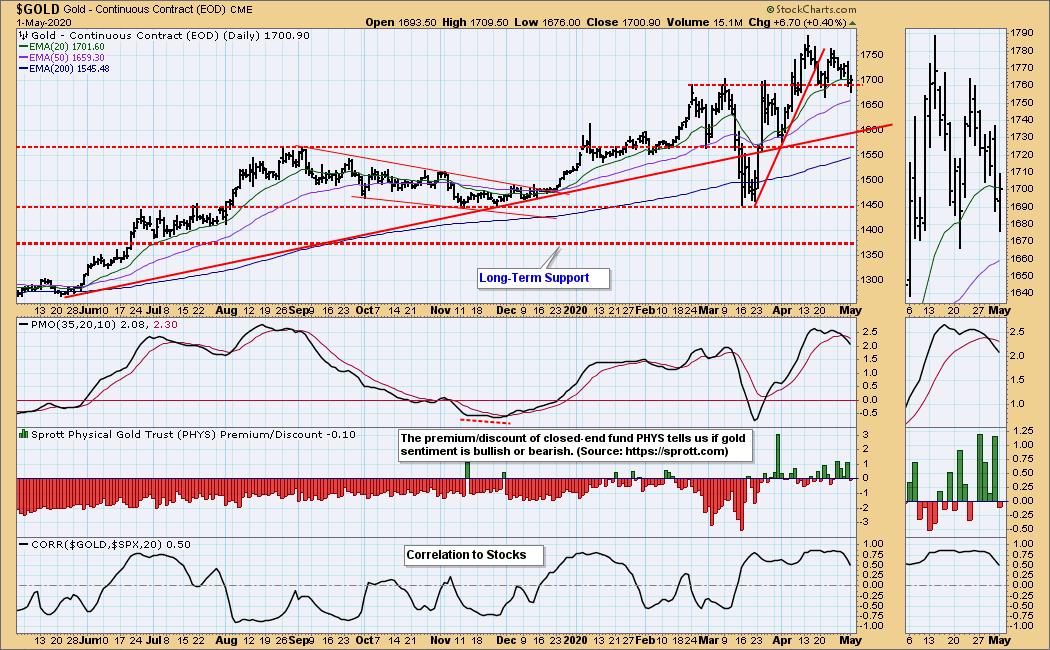 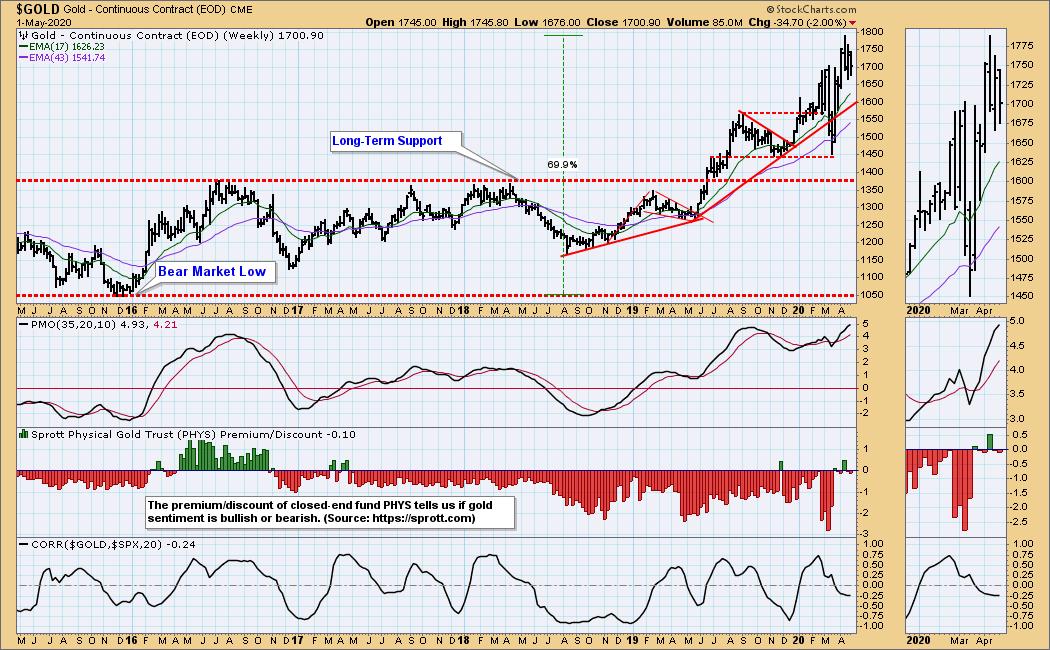 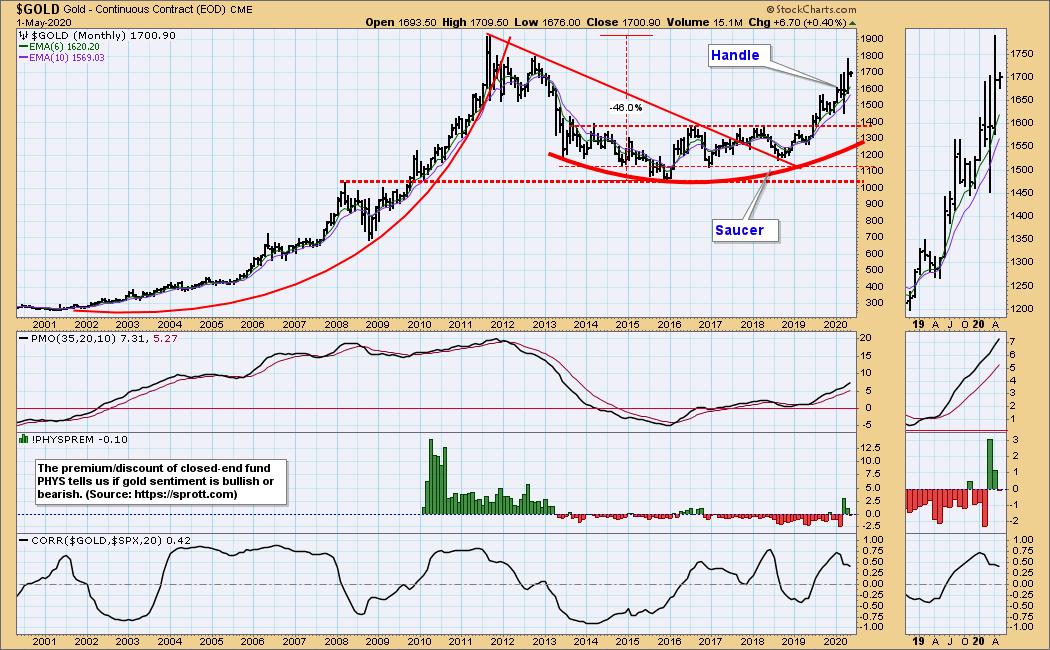 GOLD MINERS Golden and Silver Cross Indexes: GDX dropped down below support briefly today, but it closed back above the line. That top cluster looks like a bullish flag, albeit a little droopy. 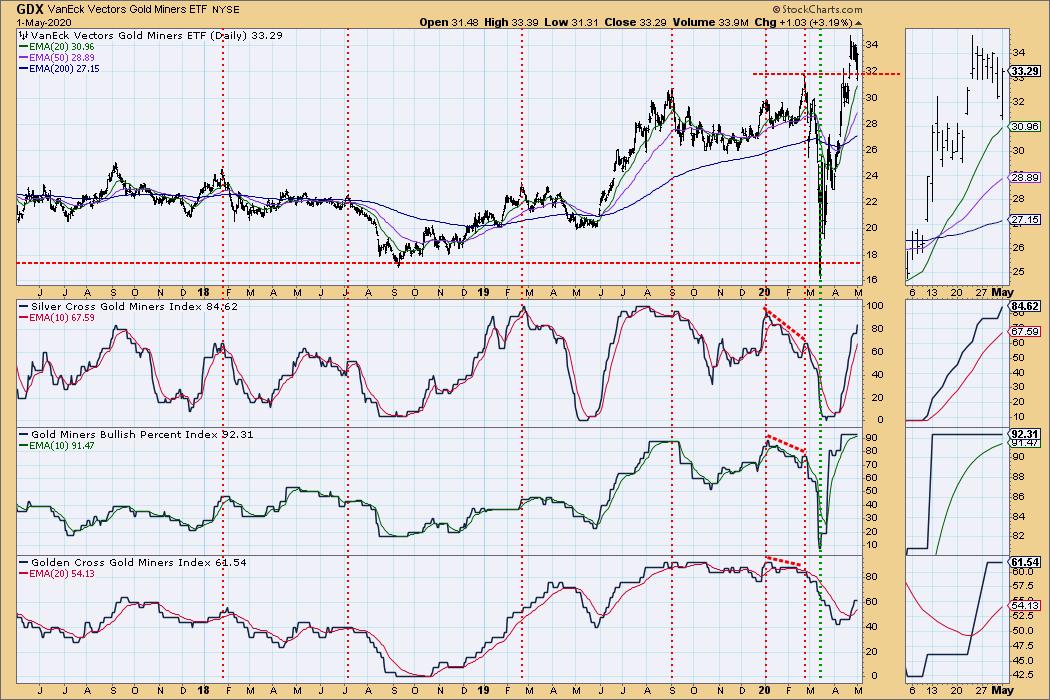 USO Daily Chart: Last week I mentioned that USO was so low, so close to the zero line, that I thought it might reverse split. On Wednesday it did just that with an 1:8 reverse split, giving it plenty of room to decline without hitting bottom. In his 10th Man newsletter Jared Dillian gave a great description of how this ETF works. It's not long and is worth a read.

USO is very oversold now, but the oversupply problem is still not worked out. With the economy opening up, some of the pressure will be relieved, and maybe we won't have to worry any longer about the near contract going below zero. 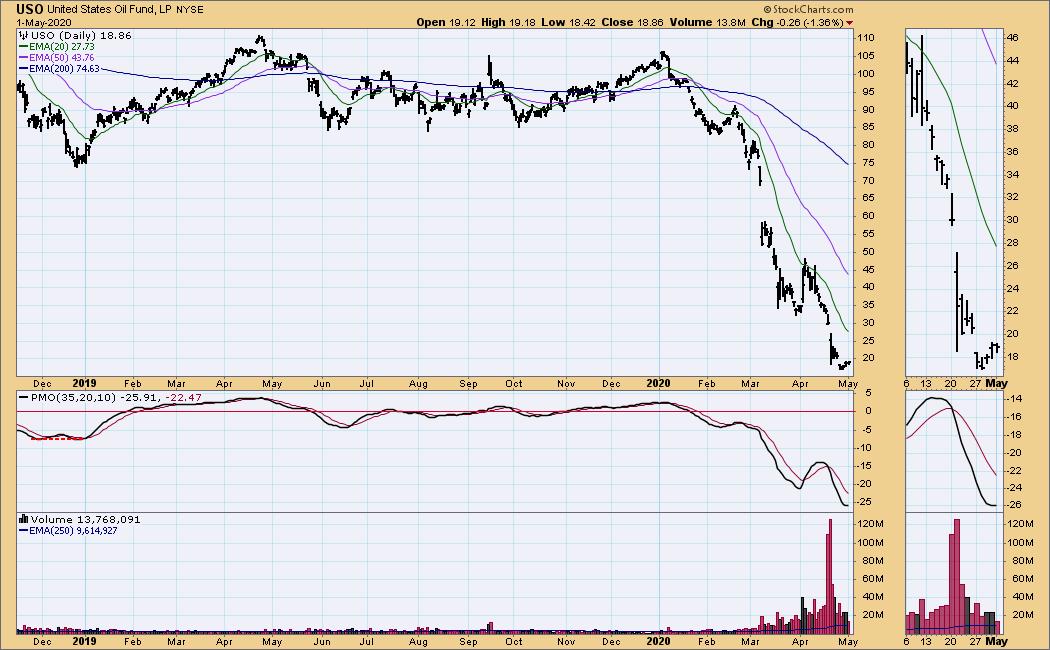 USO Weekly Chart: WTIC dropped below the long-term support line at $10.00 briefly, but that still looks like solid support. The weekly PMO is very oversold. 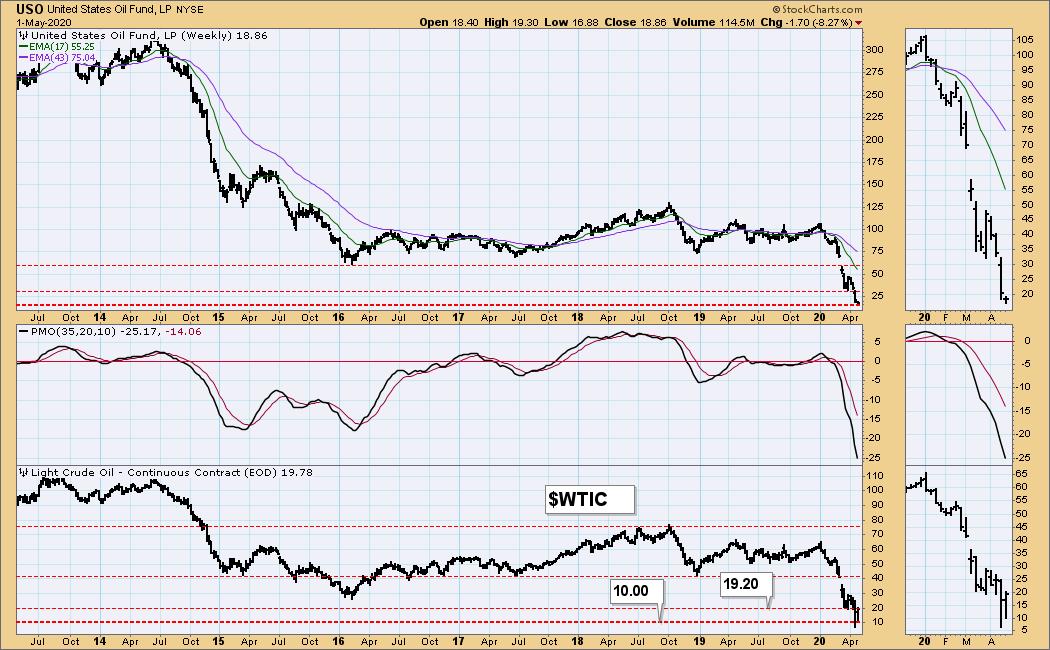 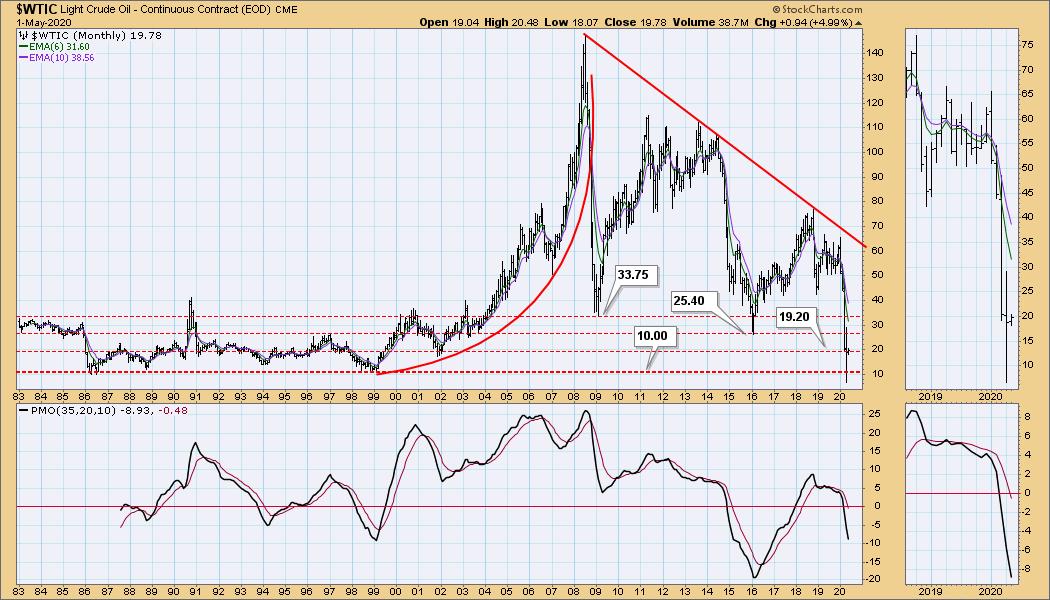 TLT Daily Chart: As with the dollar and gold, bonds experienced some wild swings in March. With yield at 0ne percent, I'd guess that the March top is the probable limit to the upside. Price looks as if it is trying to roll over, or at least settle into a sideways pattern. 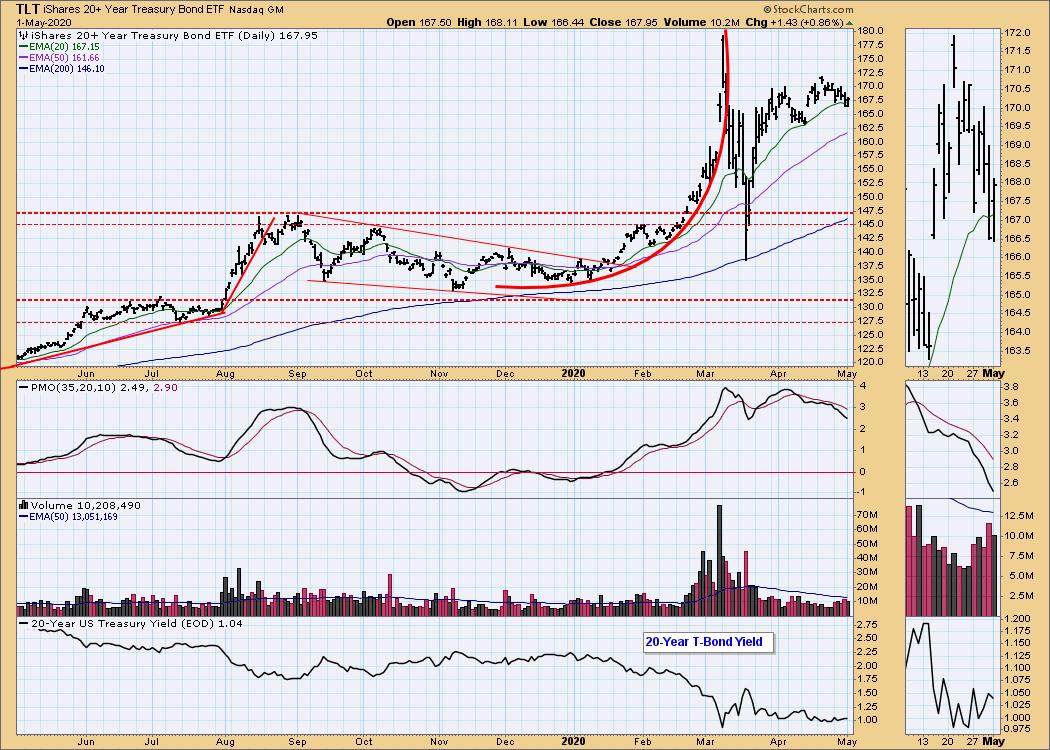 TLT Weekly Chart: Based upon the high monthly PMO reading, bonds are very overbought in this time frame. 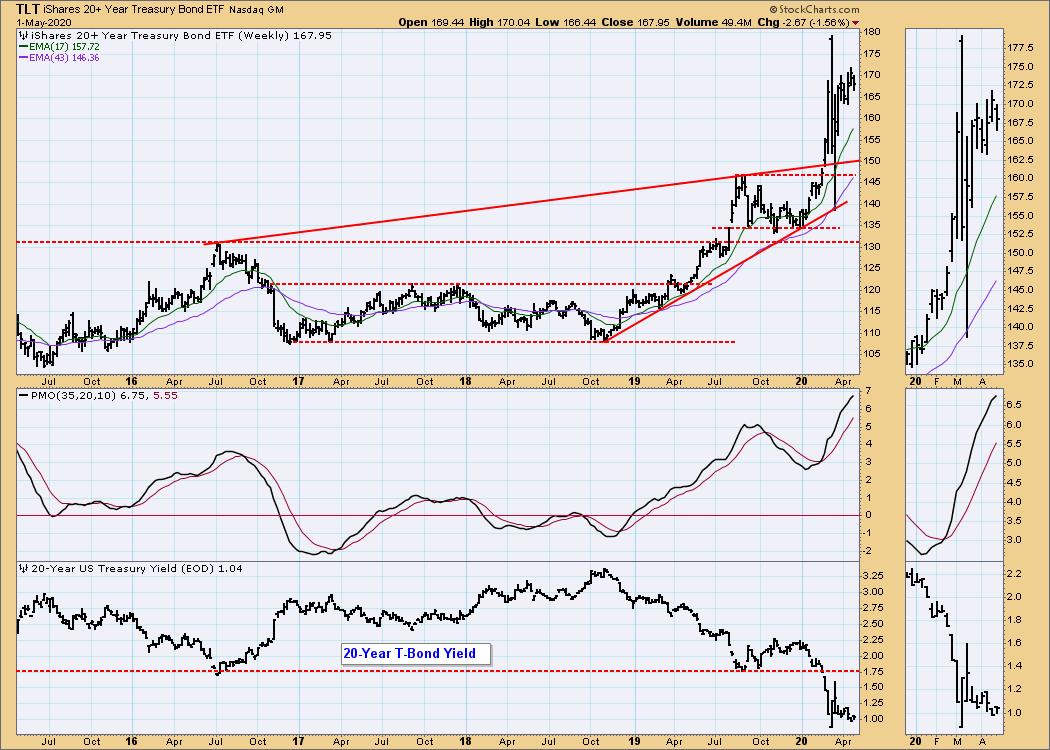 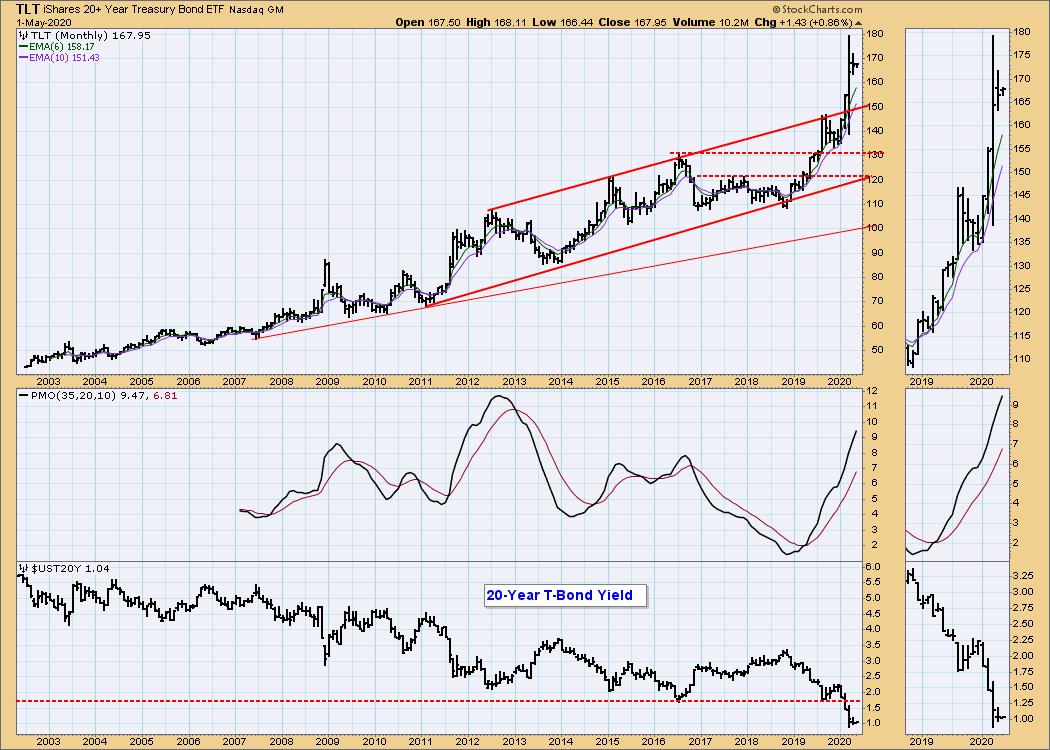