During our StockCharts TV show this week (posted on Thursday morning), I remarked to Erin that the market was "feeling" differently of late, more like it felt earlier in the year before the crash. I was referring to the fact that the price swings weren't so wild, and that price seemed to resist declines and favor advances. I went to our 5-month SPY chart, stripped out distracting indicators and annotations, and looked a bit closer. Compared to price action from mid-February through early April, price in the last two weeks has settled down considerably, but still it isn't as calm as it was before the bottom fell out. This was confirmed by the VIX, which is well off last month's highs, but is still far from the bull market norms to which we had become accustomed. (Note that I have used the standard VIX display on this chart.) SPX Total Volume has also contracted substantially, but it has stayed above the one-year daily average. So, yes, the market has been behaving better in the last two weeks, but it is still far from being back to "bull market normal." 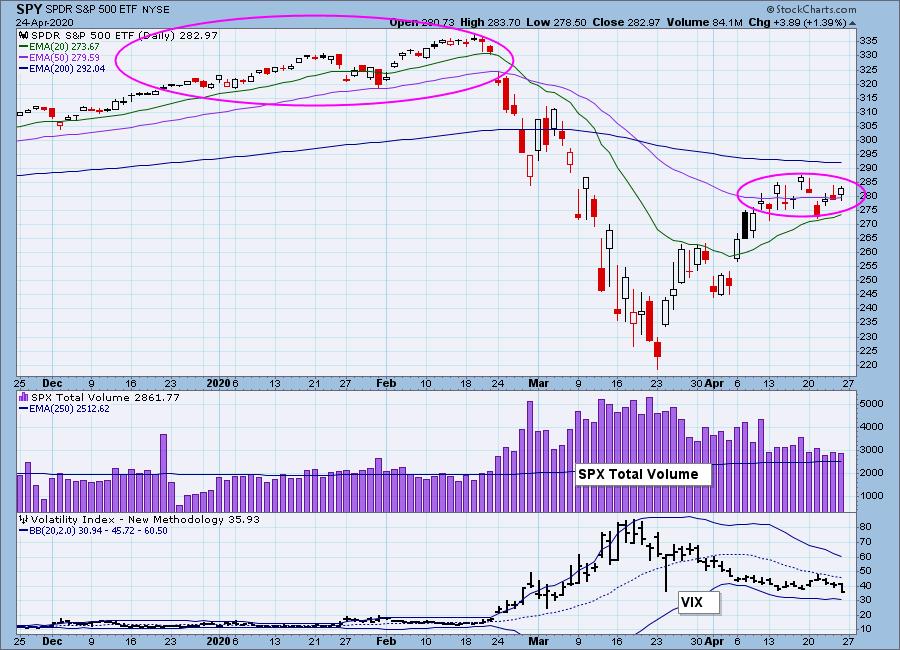 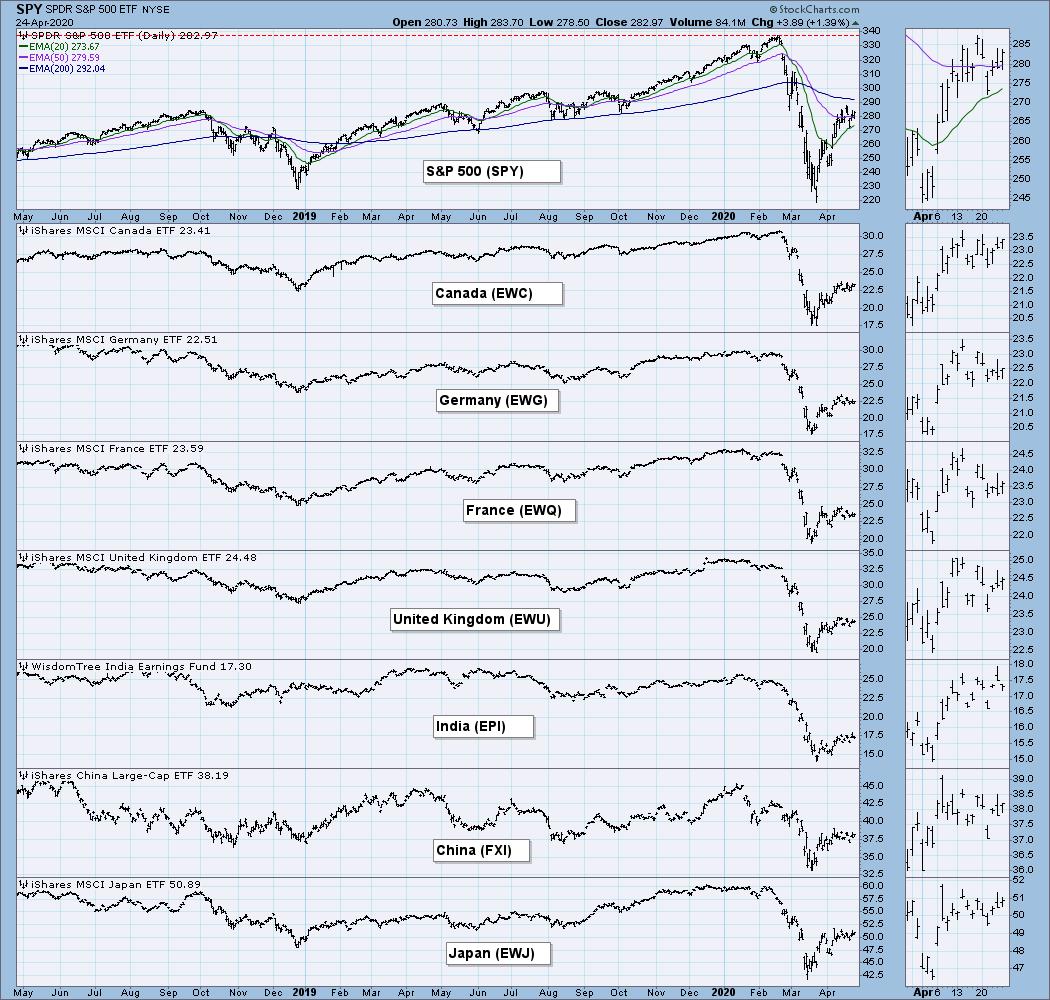 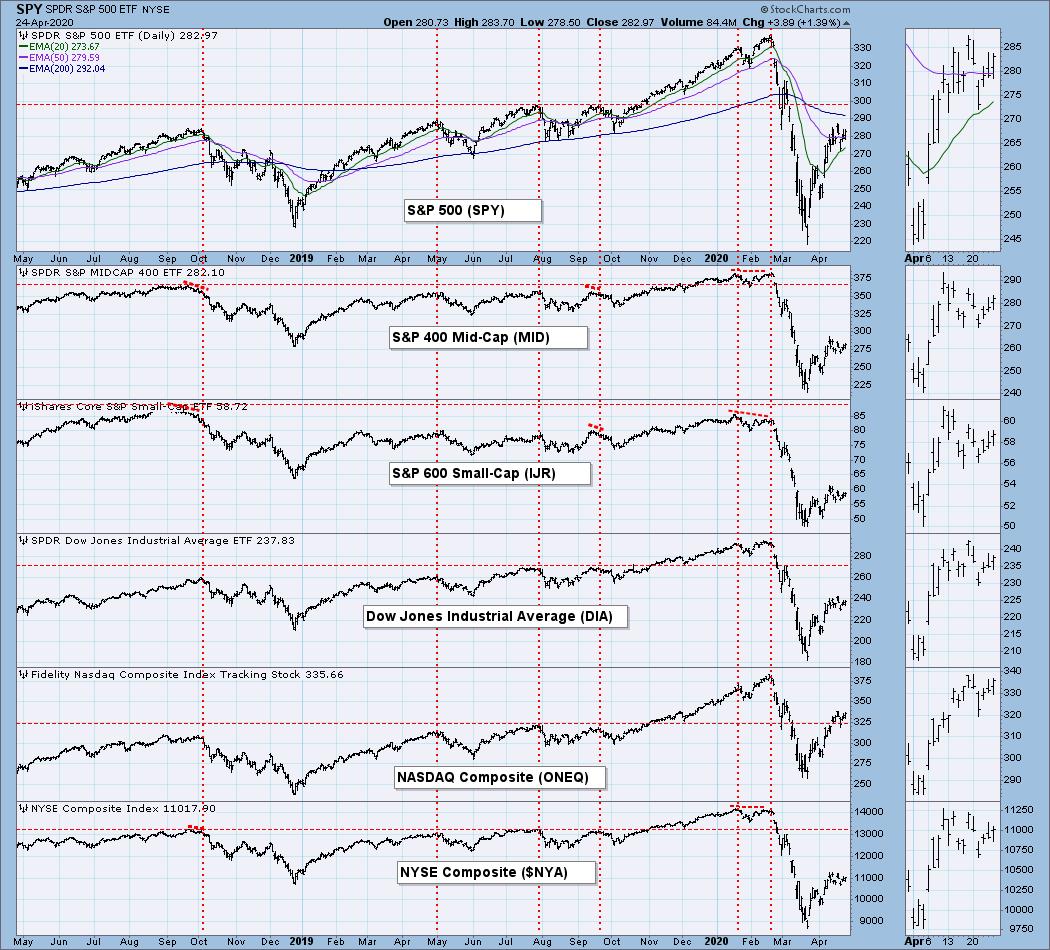 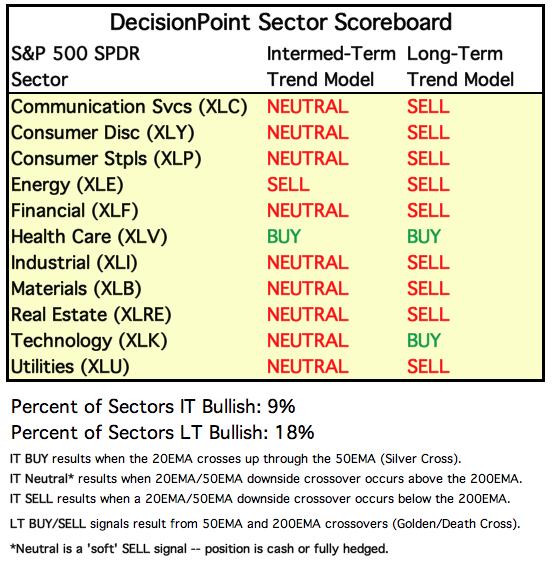 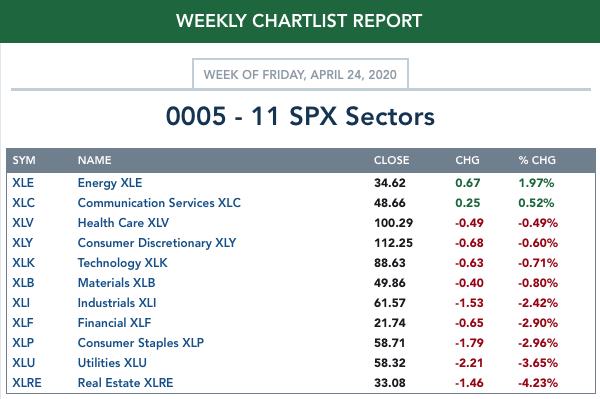 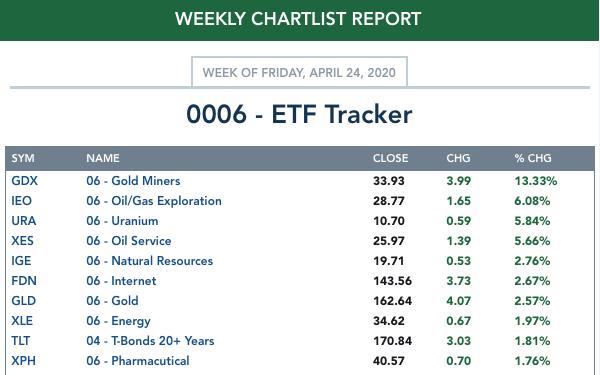 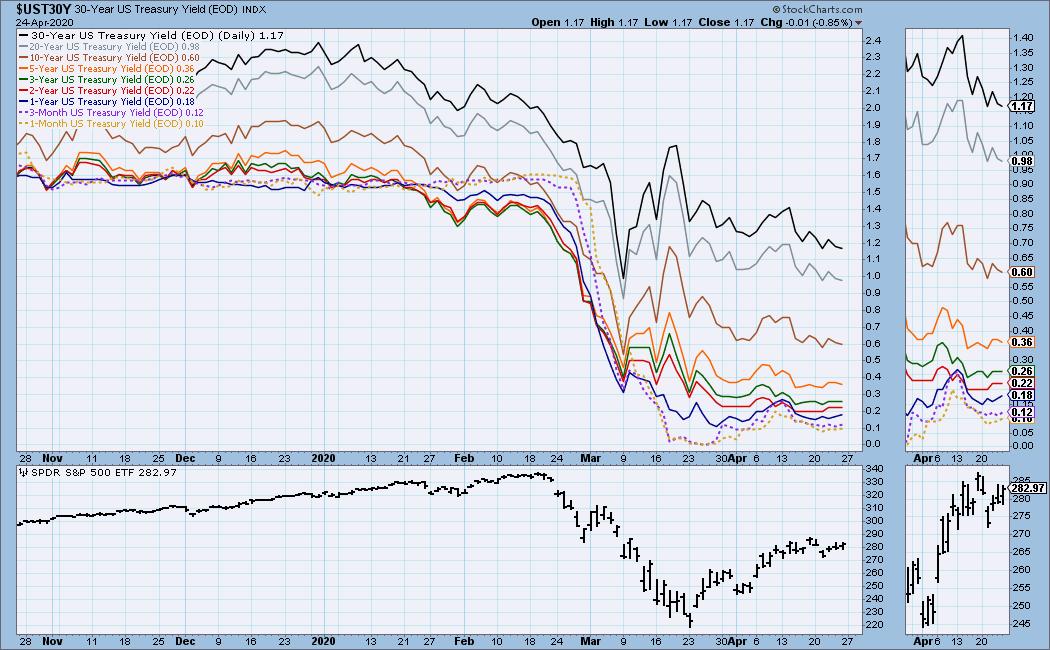 SPY Daily Chart: The rising wedge fulfilled my expectations by resolving downward on Tuesday. Since then, price has ridden up just under the bottom of the wedge, failing to reward my patience with any follow through. I plan to redraw the rising trend line next week (across the two April lows). 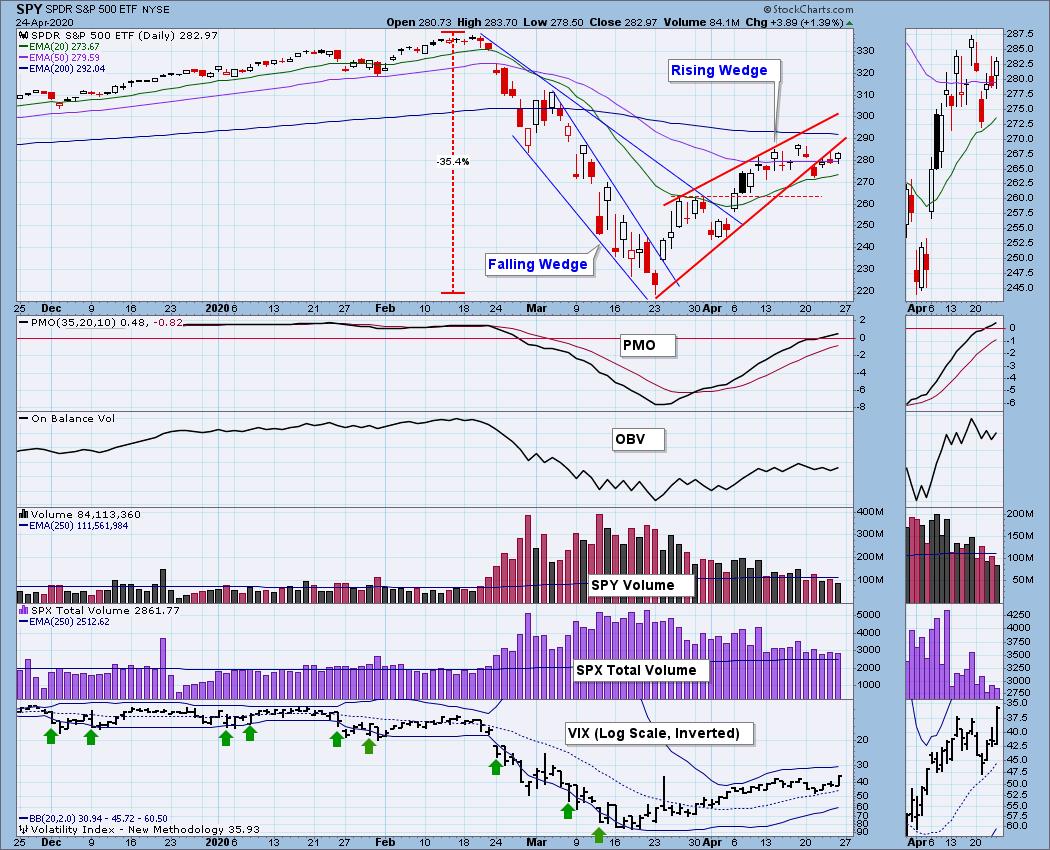 Clark, a subscriber, has suggested that the price action of the last few weeks appears to be building flag formations on the major U.S. and global indexes. They are not the best flags I've ever seen, but, yes, I'll buy it -- I can see the flag/consolidation as preparation for another push upward -- however, the top of the zone of resistance looks like a probable termination level. I should mention, the flags are more convincing on the 3-year charts near the top of this article.

The daily PMO is not all the way to the top of its range, but it is truly overbought, considering the distance it has traveled from its March low. 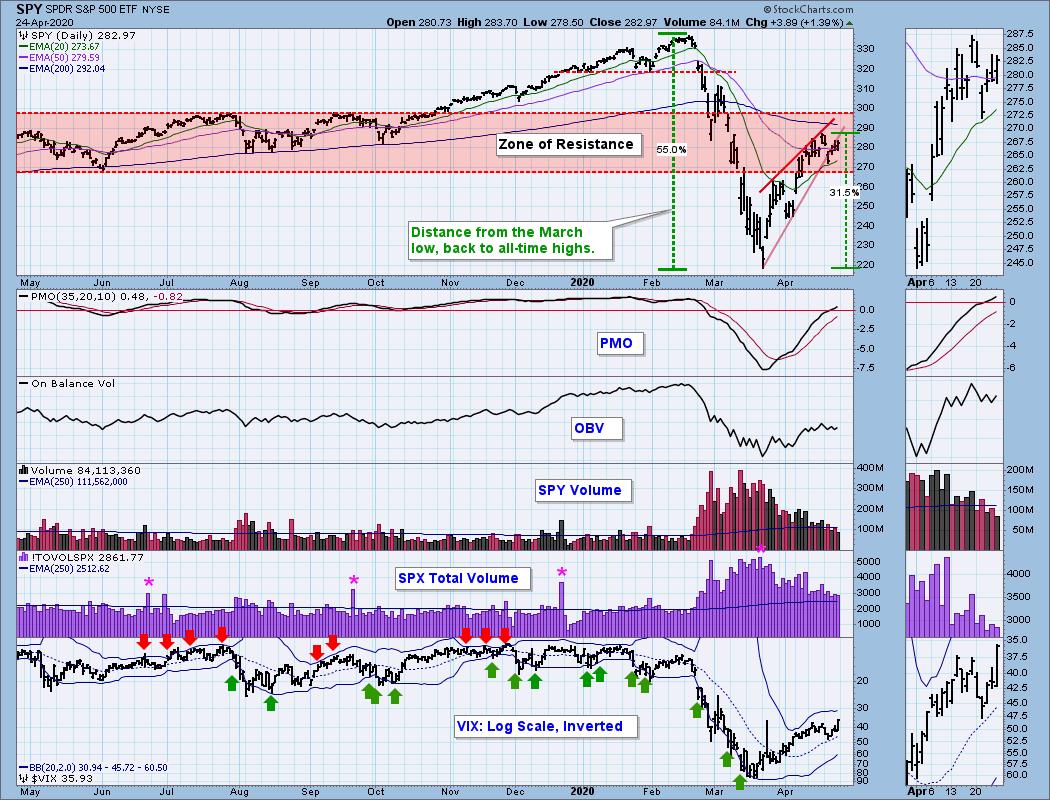 SPY Weekly Chart: The weekly PMO is oversold, but it is trying to turn down, which would be bearish. 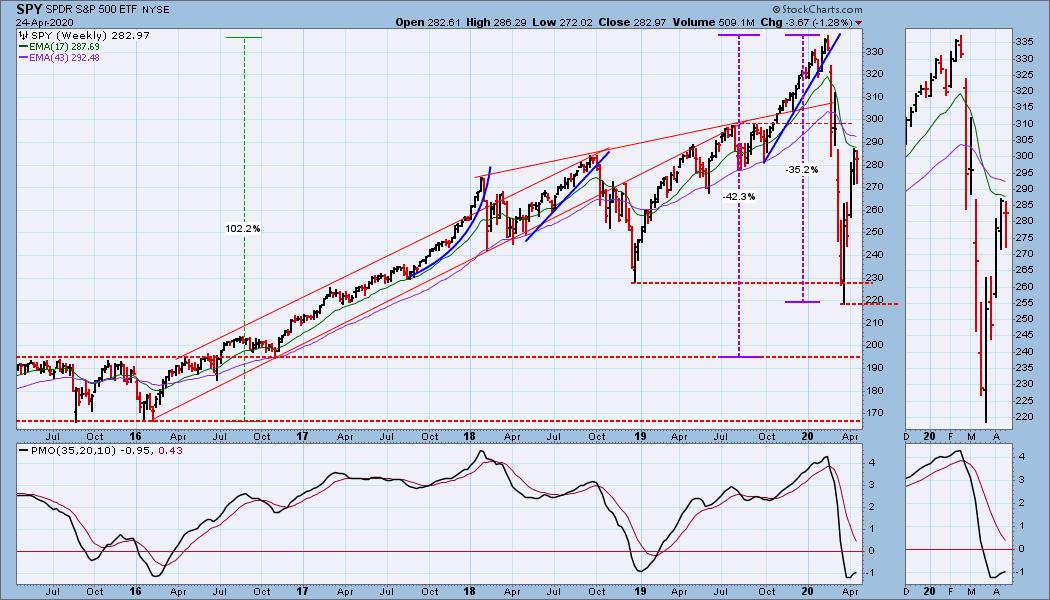 Climactic Market Indicators: There was climactic breadth on Wednesday and Friday, but volume did not join in. 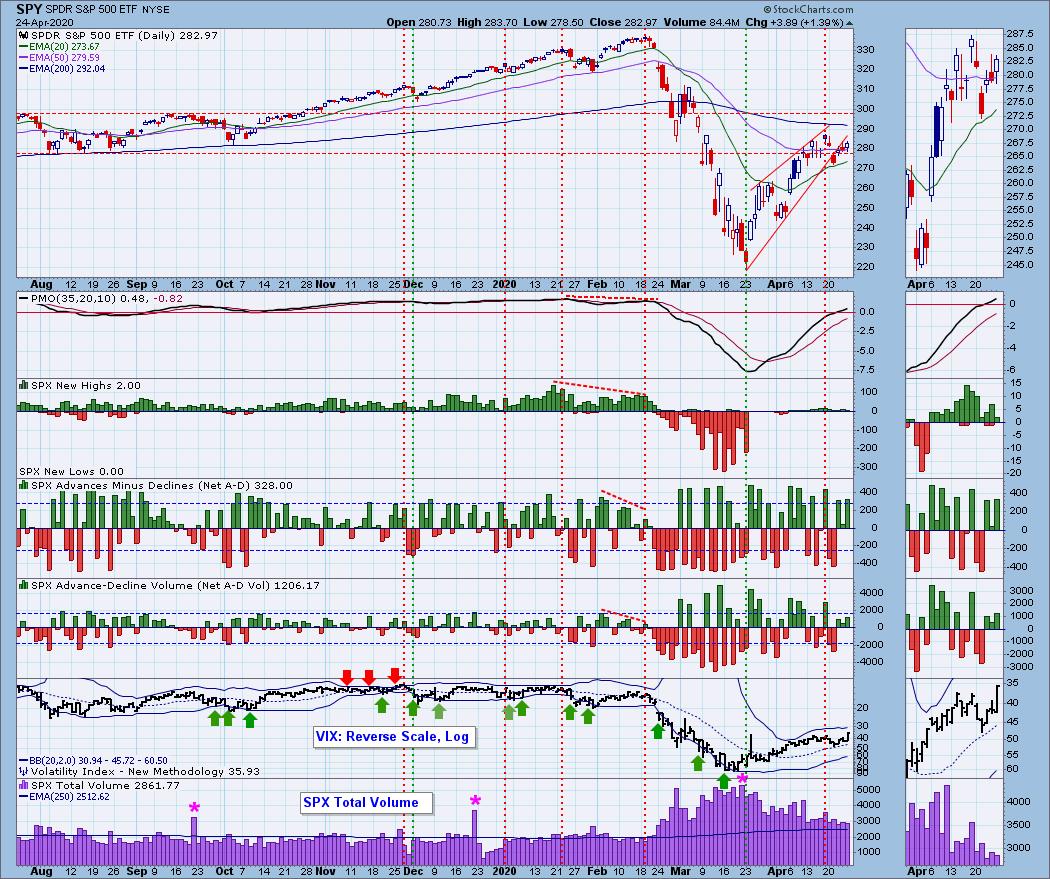 Short-Term Market Indicators: The short-term market trend is UP and the condition is NEUTRAL. The STO-V topped below the zero line on Friday, and the STO-B is almost there. Tops below the zero line are bearish in this time frame, so I'll project that next week will close down. 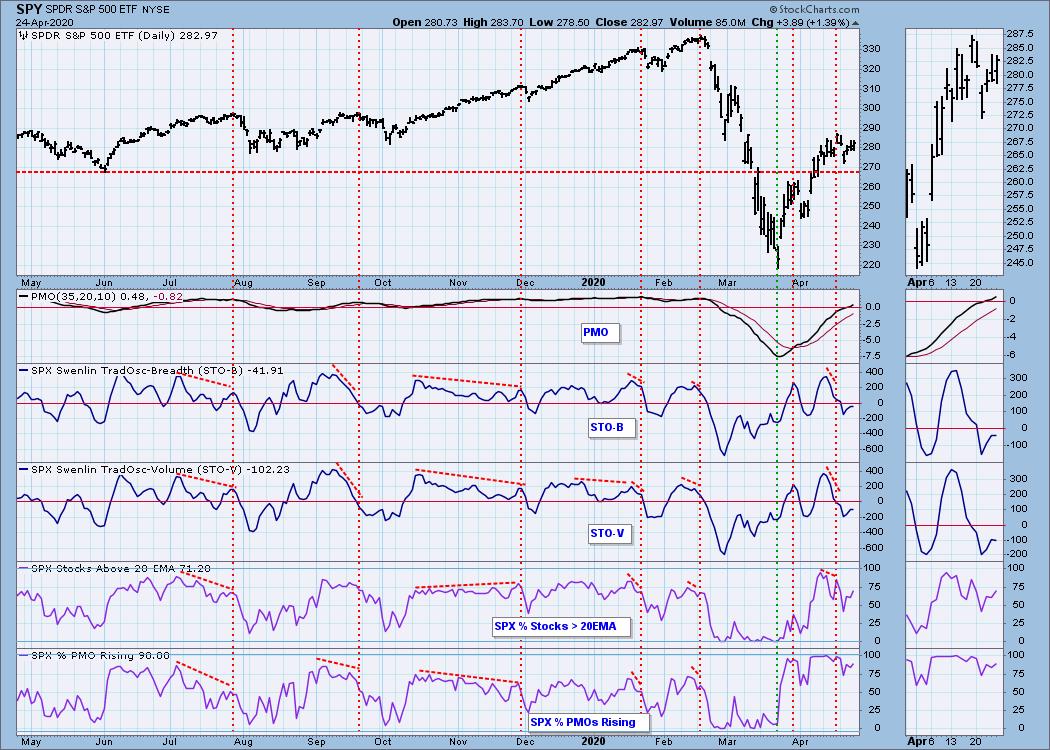 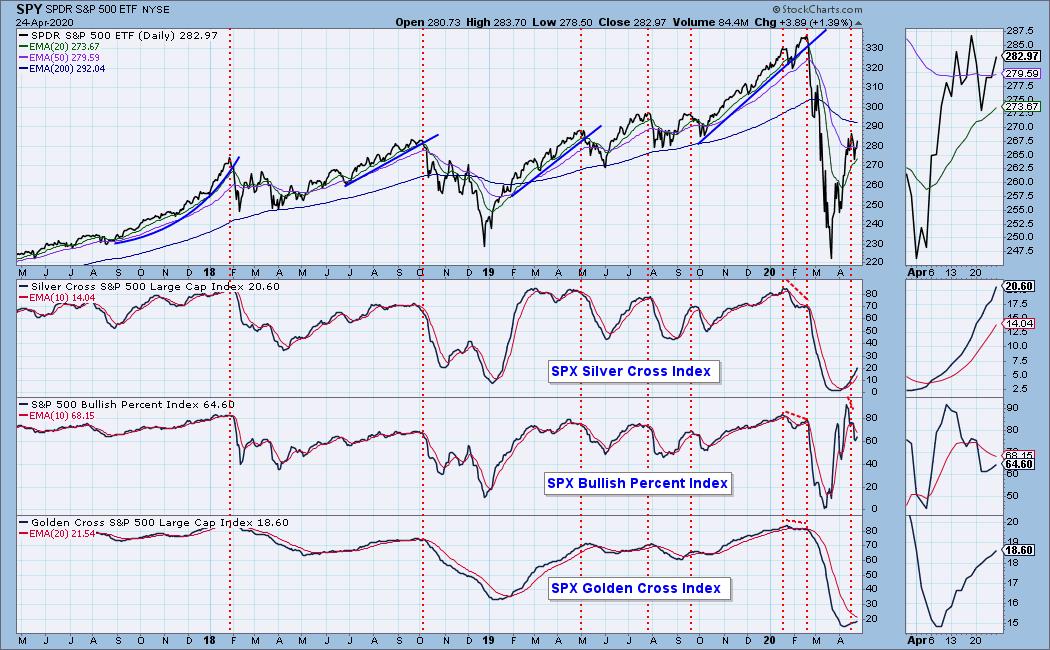 The intermediate-term market trend is UP and the condition is OVERBOUGHT. My judgment that the market is overbought has more to do with the distance the indicators have traveled from their low than their relation to the top of the historical range. And they are starting to falter. 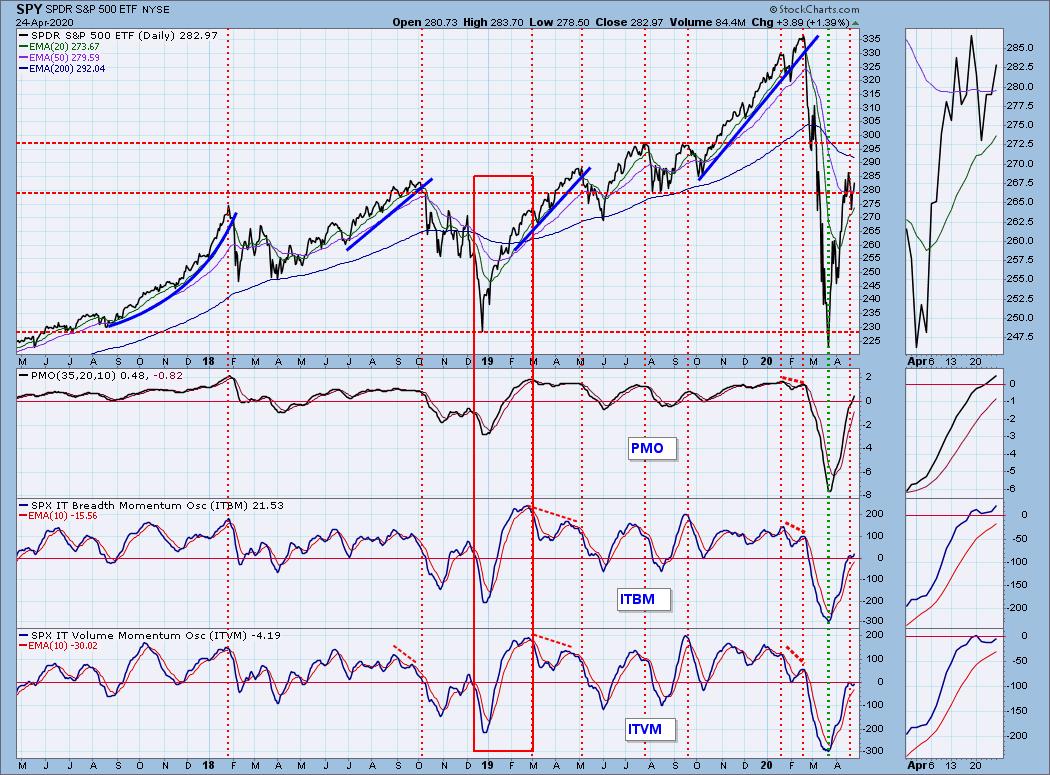 CONCLUSION: A survey taken in New York City showed that one in five people have the COVID-19 antibody, meaning that they had the virus and recovered. It means also, among other things, that the mortality rate is much lower than originally projected. In my mind, I am seeing a much better outcome than has been anticipated, although, the apparent improvement could, of course, be overshadowed by future developments. If the free enterprise system is allowed to fully engage, I have high hopes for the speed of the recovery, with biggest problem being to get the government to hell out of the way.

I still think that a bear market (secular) is in force; however, since the market has advanced about 31% since the March low, I have to assume we have entered a bull market (cyclical). Nevertheless, as I discussed at the beginning of this article, volatility is still high, and the market has not regained the temperament of a confident, plodding bull. It is a case where we won't know for sure until after the fact. If new 52-week highs are made, this rally was the beginning of a new bull market. If new 52-week lows are made, this rally is irrelevant.

UUP Daily Chart: The UUP chart resembles the TLT chart in that it had a volatile March, and now seems to be trending higher. I wonder how this will be able to persist with us piling on more massive debt. 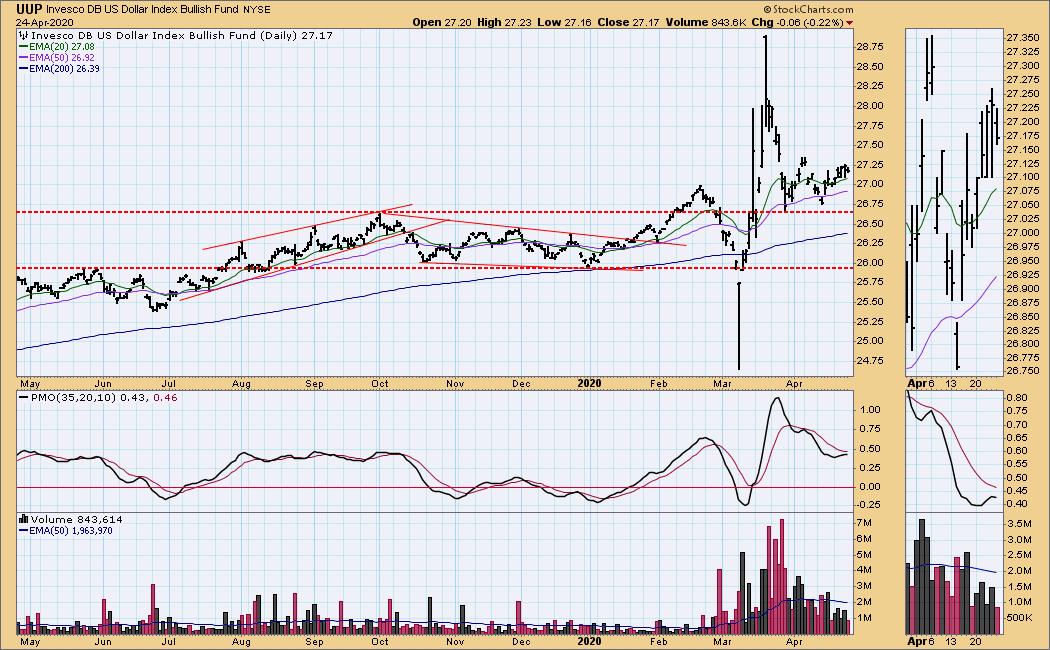 UUP Weekly Chart: Here I'm looking at March as an outlier in the context of a rising trend channel. 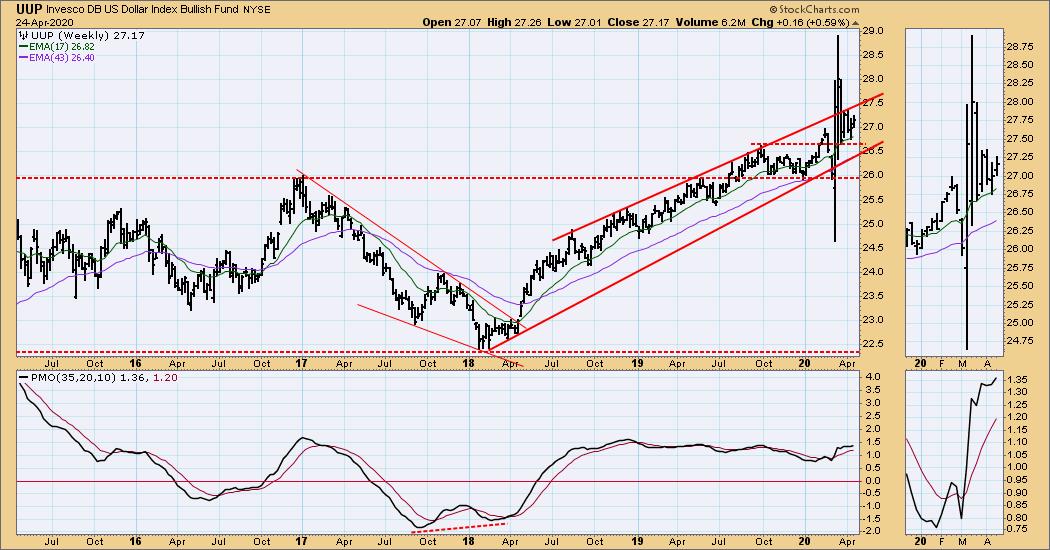 GOLD Daily Chart: I often refer to gold's progress as being "tortured," and I have no reason to abandon the term now. In this time frame, gold has been positively correlated with stocks since mid-March, which accounts to the sharp pullback followed by a nice rally. The daily PMO is overbought, so we should expect a period of consolidation or pullback. 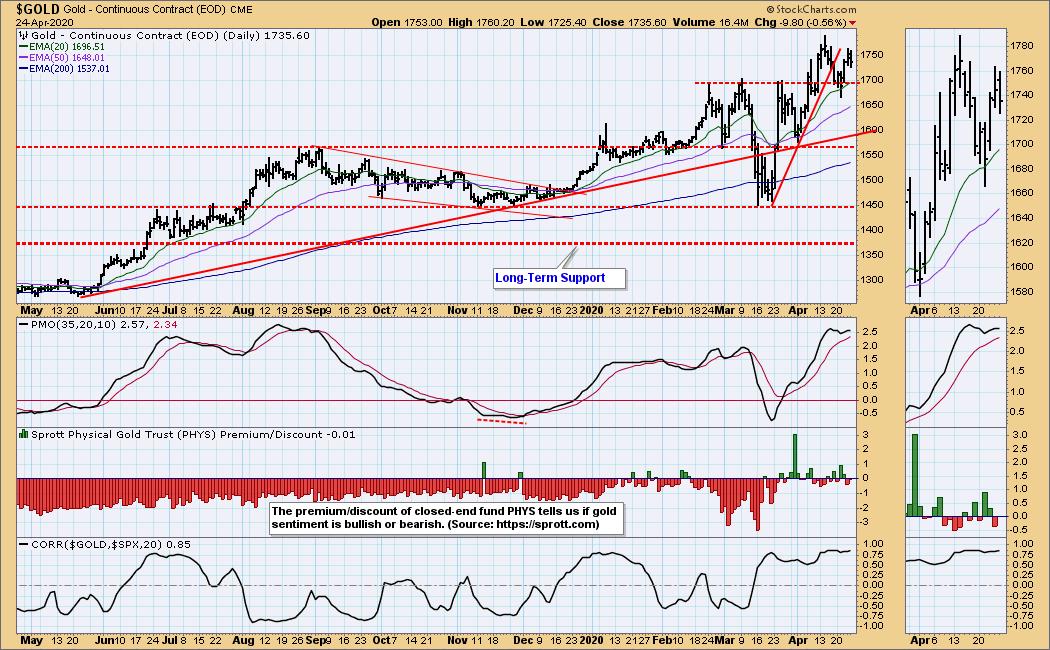 GOLD Weekly Chart: The weekly PMO is also overbought, and a move back to the rising trend line seems reasonable. 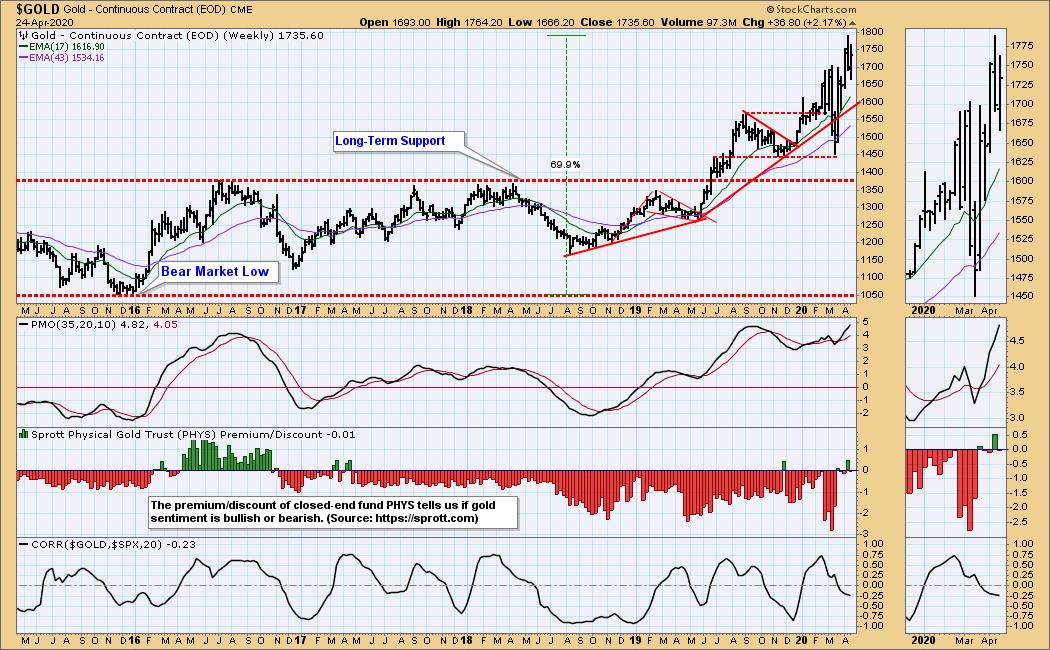 GOLD MINERS Golden and Silver Cross Indexes: Gold miners broke out this week. While the early warning Bullish Percent Index is overbought, the Silver Cross and Golden Cross Indexes allow for the rally to continue before they reach overbought levels. 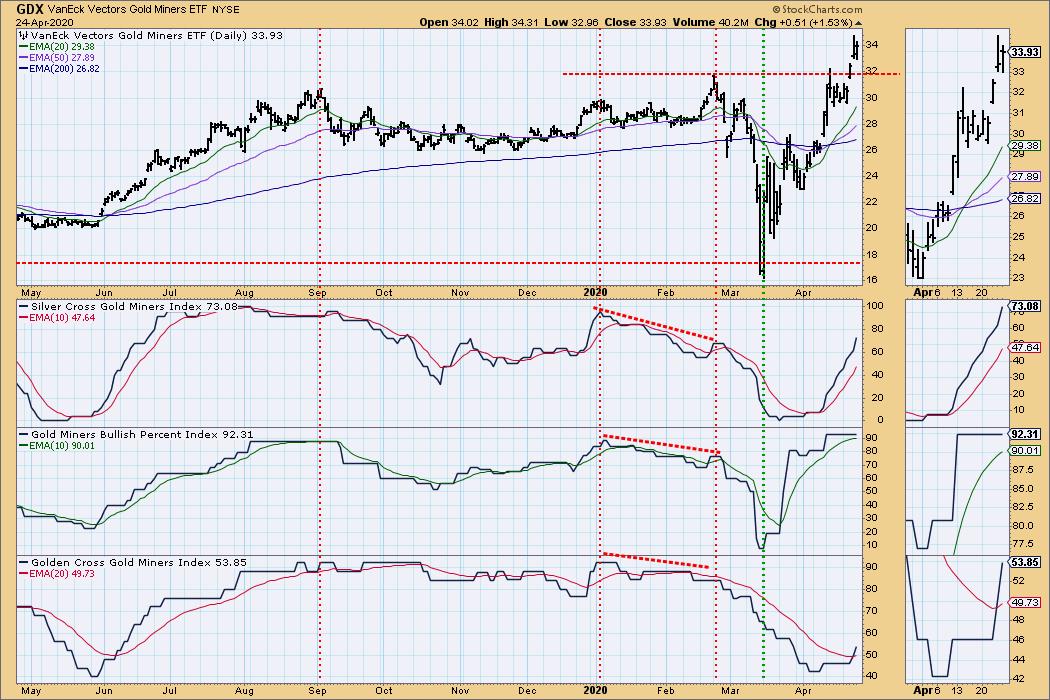 USO Daily Chart: This week, for the first time ever the crude oil futures near contract (May) traded well below zero, basically because there is no place to store the oil because of low demand, and the contract was expiring. We can see how this affected USO, driving it to lows that may prompt a reverse split. (That's not something I've heard, but reverse splits are sometimes what happens when price starts crowding the bottom of the chart.) The daily PMO is super-oversold. 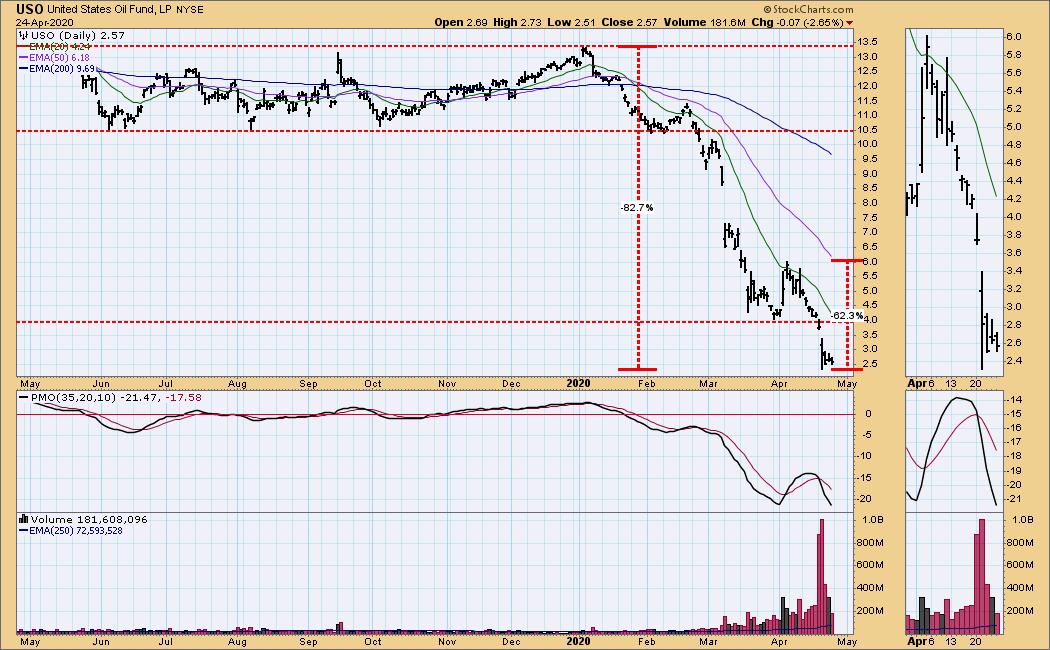 USO Weekly Chart: The weekly PMO is very oversold, second only to the PMO low generated by the 2008 crude oil crash (visible on the monthly chart below. 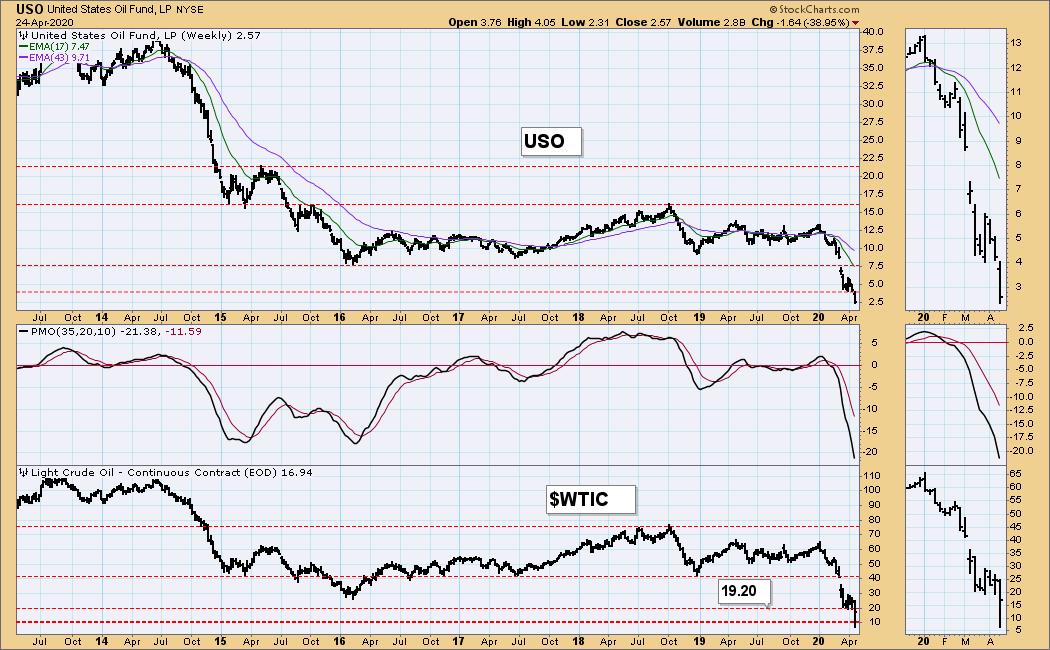 WTIC Monthly Chart: WTIC made a brief intraday plunge below the historical low support line at 10.00. I am amazed that not too long ago I didn't think we'd see it reach that support. 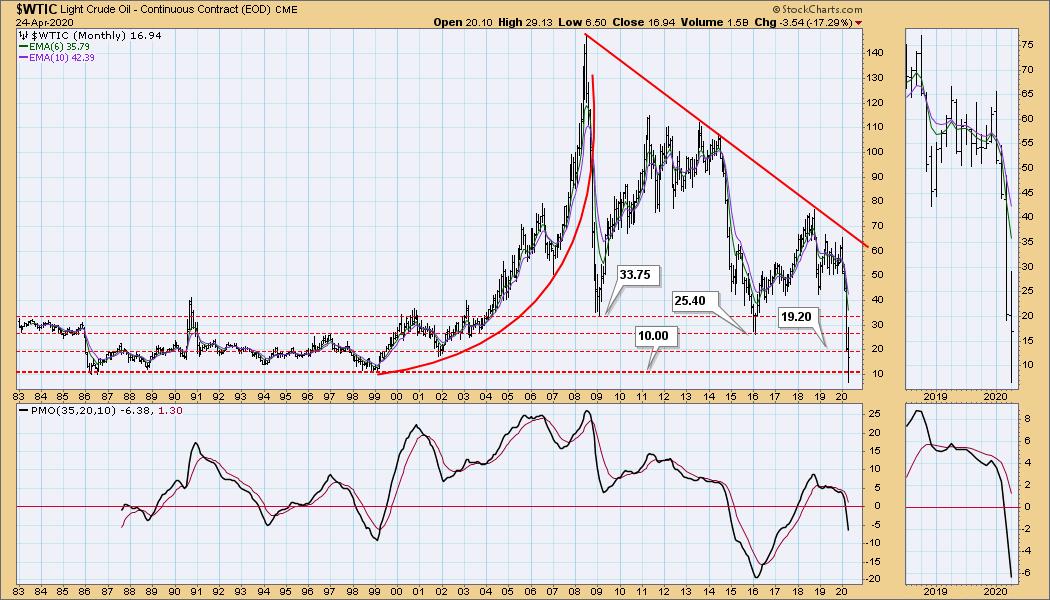 TLT Daily Chart: After the initial volatility in March passed, price has settled down to a steady advance. Since the 20-year bond has a one percent yield, there is still room for higher prices, even higher than the March top. 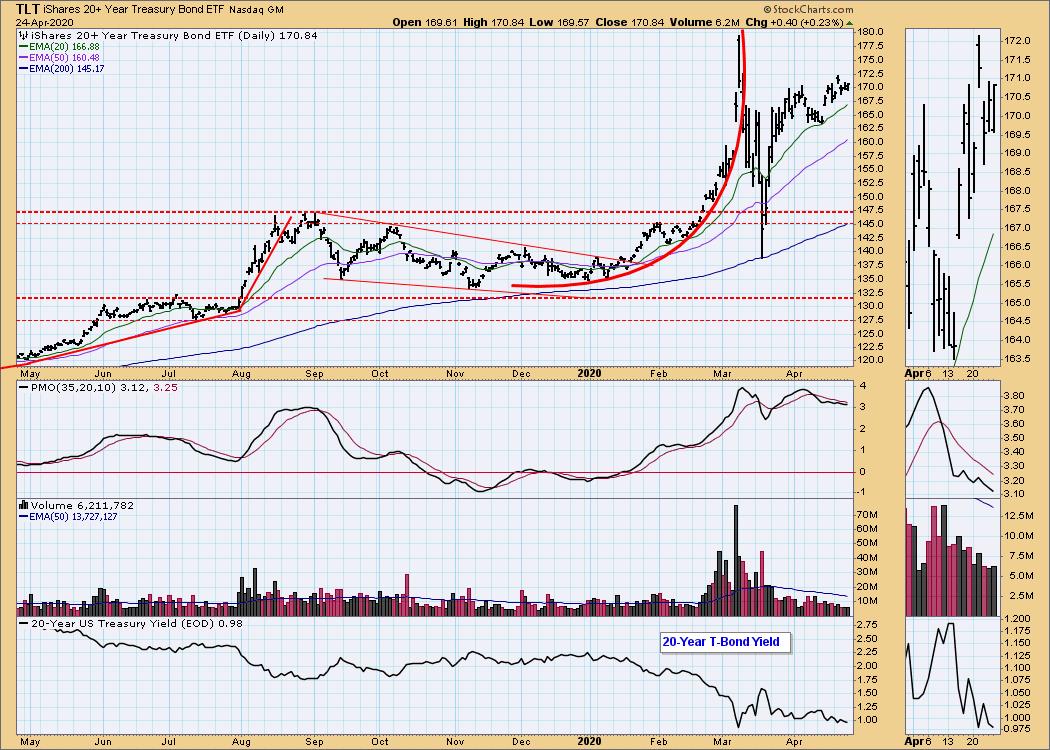 TLT Weekly Chart: The weekly PMO is very overbought, but I don't think that is going to limit the upside. 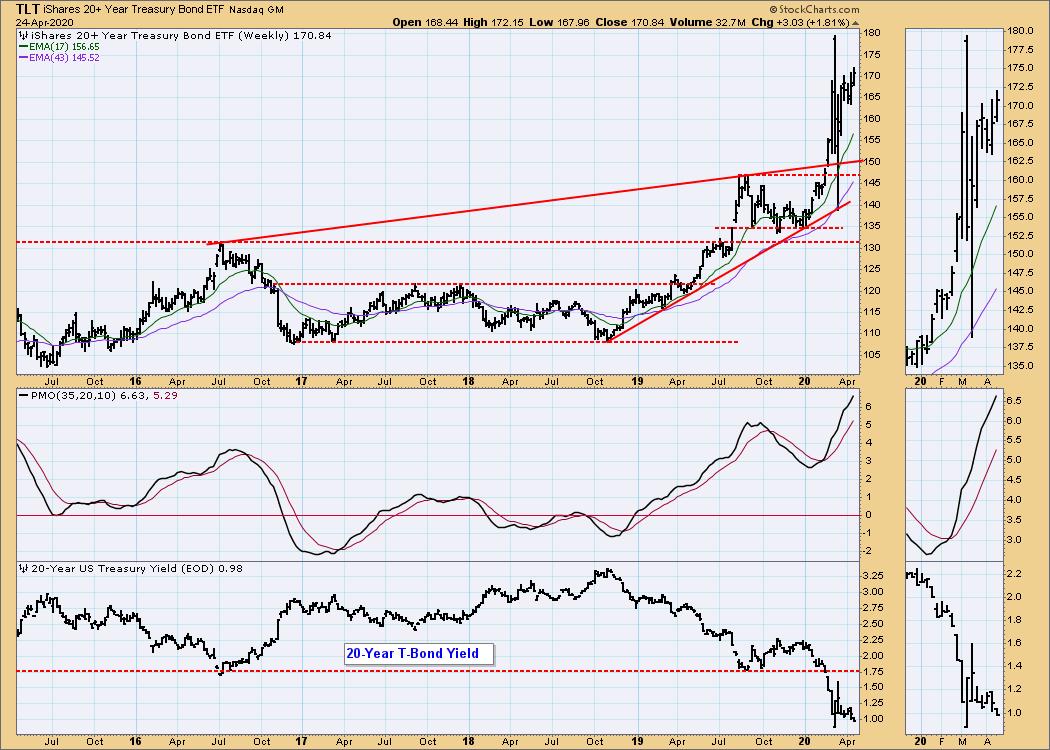