Attention: your browser does not have JavaScript enabled!

The market was flat in anticipation of the FOMC rate hike announcement. As we have mentioned before, the hike itself had already been expected and priced in. What wasn't "baked in" was verbiage by Chairman Powell that a 75 basis point rate hike was not being actively considered, that inflation was peaking and that households, businesses and the labor markets remain in good shape. We personally question this line of thinking, but investors were relieved and a strong broad market rally began in all sectors. However, the continuation of this rally is suspect given price is already facing overhead resistance at last week's highs. 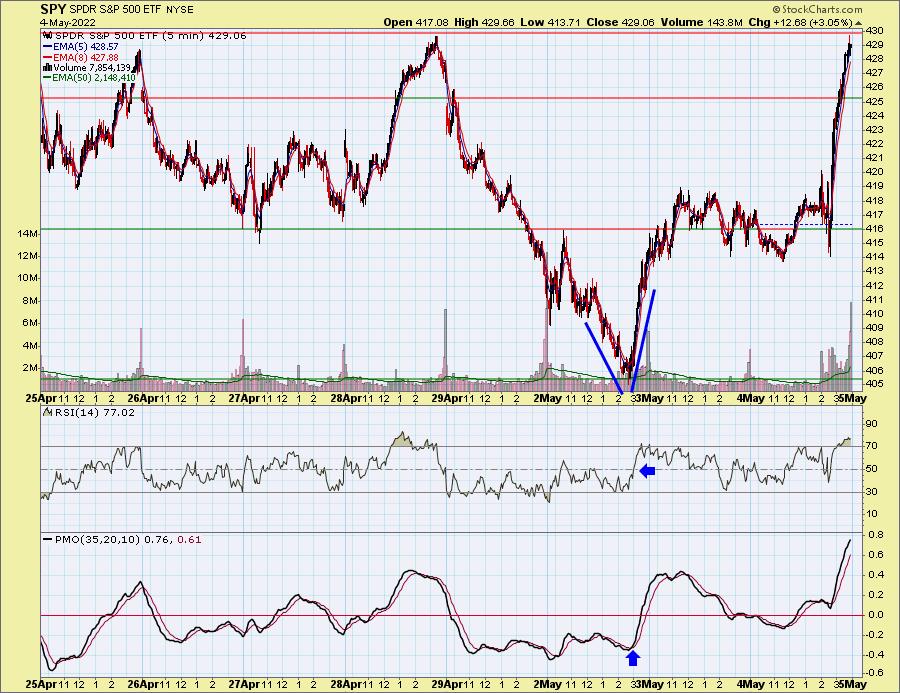 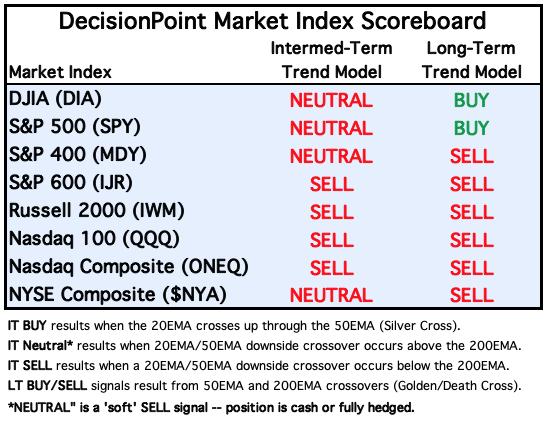 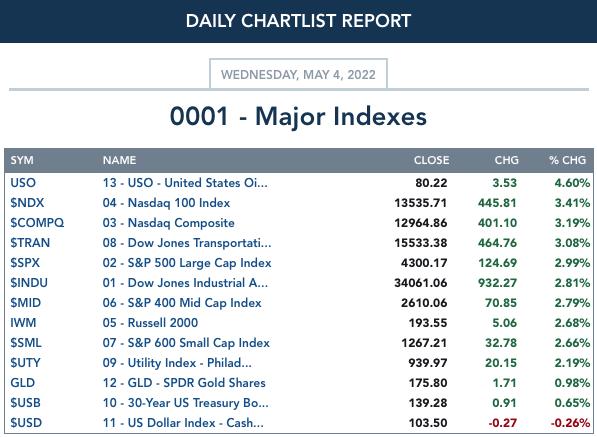 Each S&P 500 Index component stock is assigned to one of 11 major sectors. This is a snapshot of the Intermediate-Term (Silver Cross) and Long-Term (Golden Cross) Trend Model signal status for those sectors. 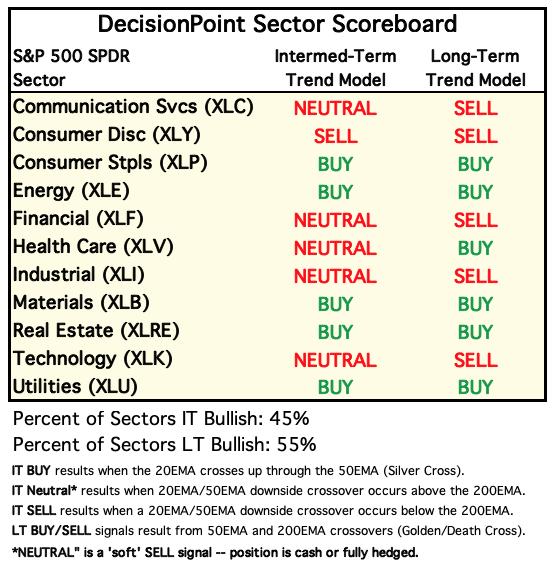 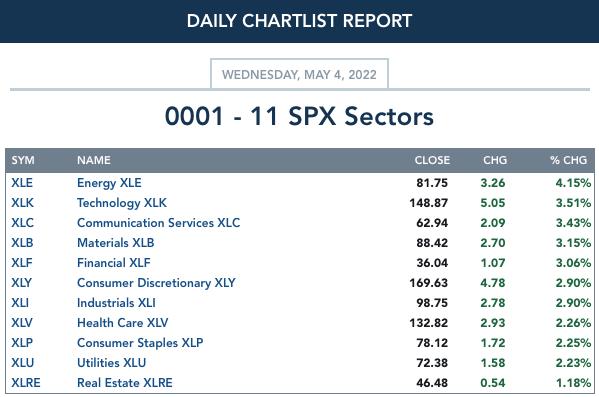 The following is a 100-year chart of $ONE. It has a constant value of 1.0, and it is the benchmark we use when we want to measure the relative rotation of price indexes against a "no change" index. When the market is going up, we want to find stocks/indexes that are performing better than the market, so we use SPY as the RRG benchmark. When the market is going down, we don't want to identify stocks that are just going down more slowly than SPY. We want to find stocks that are actually going up, so the $ONE benchmark is what we use for bear markets.

Below we have RRG charts for each benchmark.

$ONE: Using $ONE as the benchmark, the sectors are all in the Lagging and Weakening quadrants. However, we see marked improvement in XLE and XLK. XLK could reach the Improving quadrant soon.

XLP has the strongest location being the only one in the Weakening quadrant, but its bearish southwest heading suggests it is going to be lagging soon.

XLC is rising toward the Improving quadrant, but is still far from entering it. XLI, XLB and XLV are reversing northward which is favorable. We just have to remember, all of these sectors are either Lagging or Weakening. 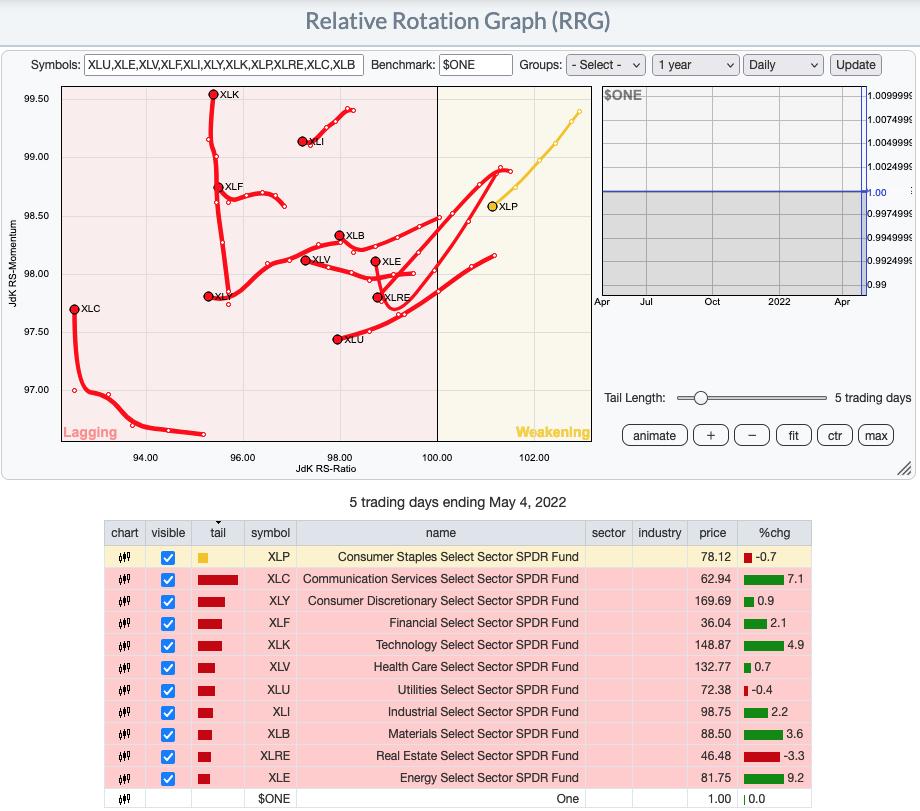 SPY: In our estimation, XLE is one of the strongest sectors on the RRG. XLE has completely reversed from a bearish southwest heading into a bullish northeast. Stocks and ETFs that hook back toward the Leading quadrant from the Weakening quadrant are considered very bullish according to RRG creator, Julius de Kempenaer.

XLK looks interesting as well given its bullish northeast heading and proximity to the Leading quadrant.

XLC has a bullish northeast heading, but is far from reaching the Improving quadrant.

XLY is the most bearish sector given its bearish southwest heading within the Lagging quadrant.

XLI is the only member of the Leading quadrant, but it is beginning to lose steam as it heads toward the Weakening quadrant.

In spite of its rally, XLF, a resident of the Improving quadrant, has a southward heading. It should reach the Lagging quadrant soon.

All other sectors are in the Weakening quadrant and have bearish southwest headings. 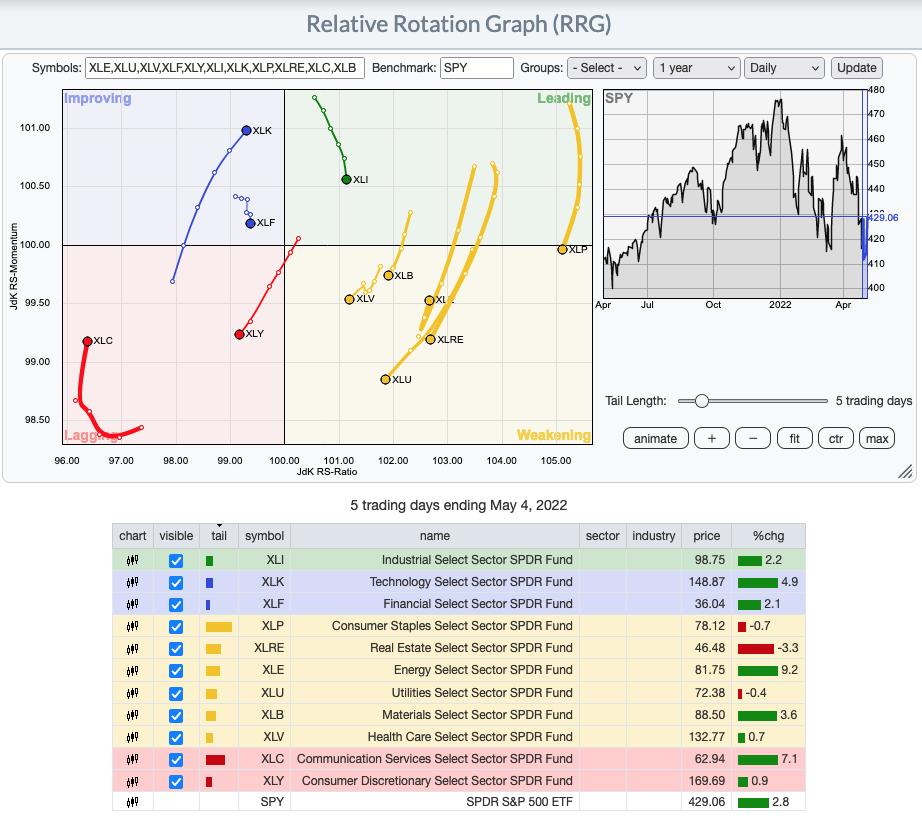 CLICK HERE for an animated version of the RRG chart.

SPY Daily Chart: The bullish falling wedge was confirmed with today's breakout. Price is now up against overhead resistance at not only the 20-day EMA but also last week's high. Today's close was higher than the January lows, but that area can still be considered resistance. 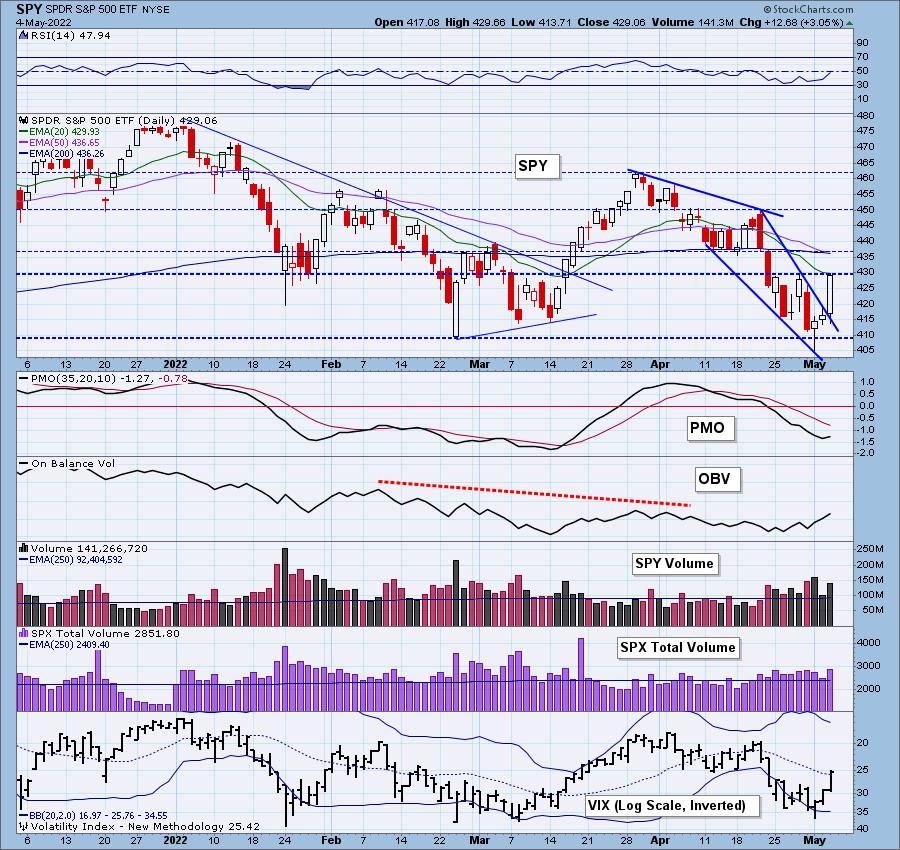 Indicators did an about face with the PMO turning up and the RSI nearly reaching positive territory. The VIX closed above its moving average on our inverted scale which is positive. Stochastics are rising again. 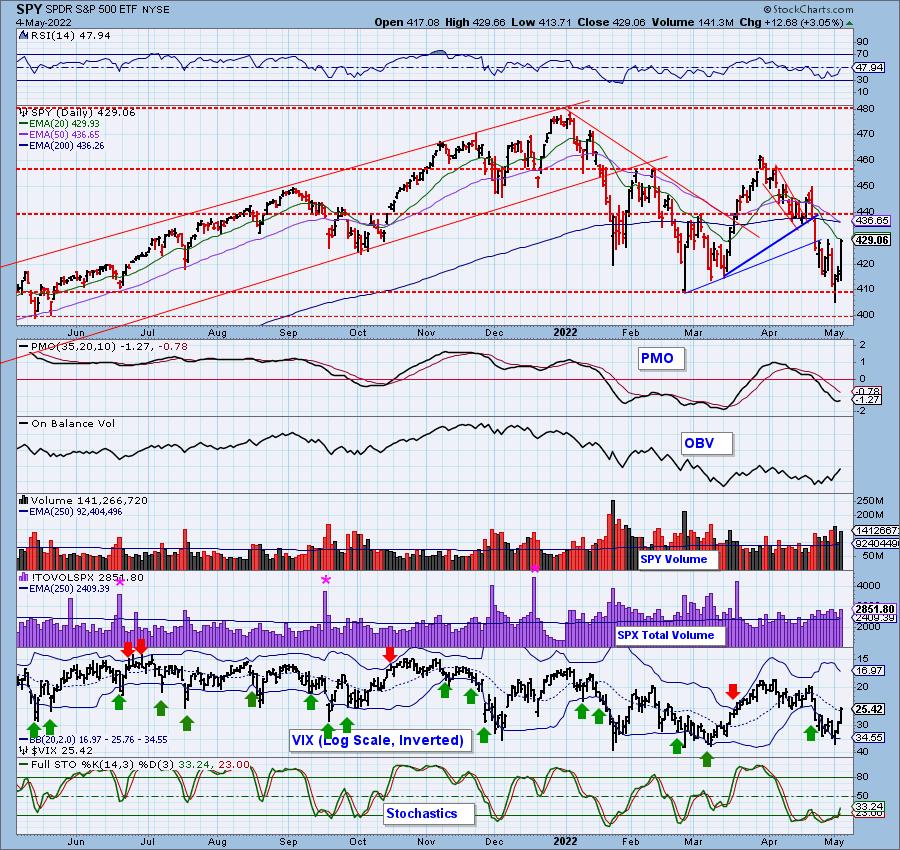 Here is the latest recording:

S&P 500 New 52-Week Highs/Lows: We didn't see much of a bump on New Highs, but the rally was mainly in the afternoon before the close. New Lows expanded somewhat. The 10-DMA of the High-Low Differential is still in decline. 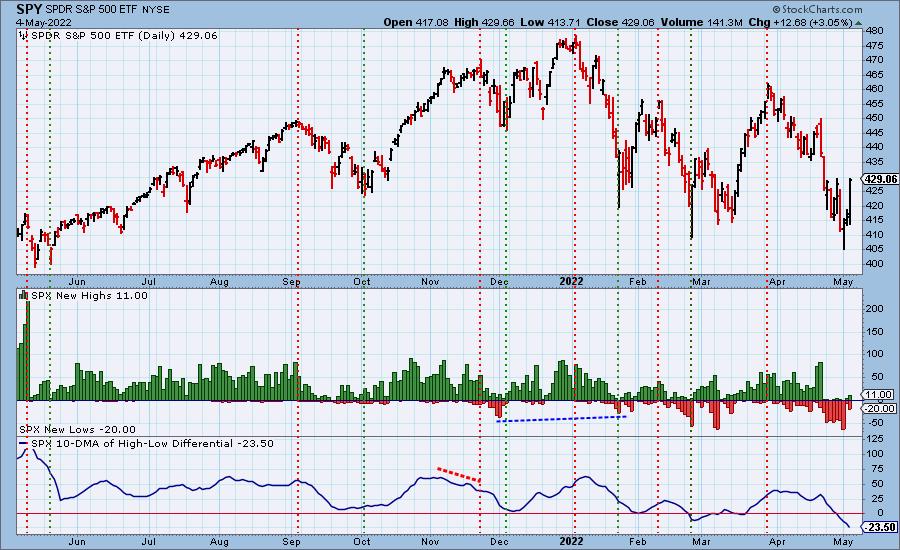 Climax* Analysis: Since there was an upside initiation climax yesterday, today's massive climactic readings must be called an upside exhaustion climax. 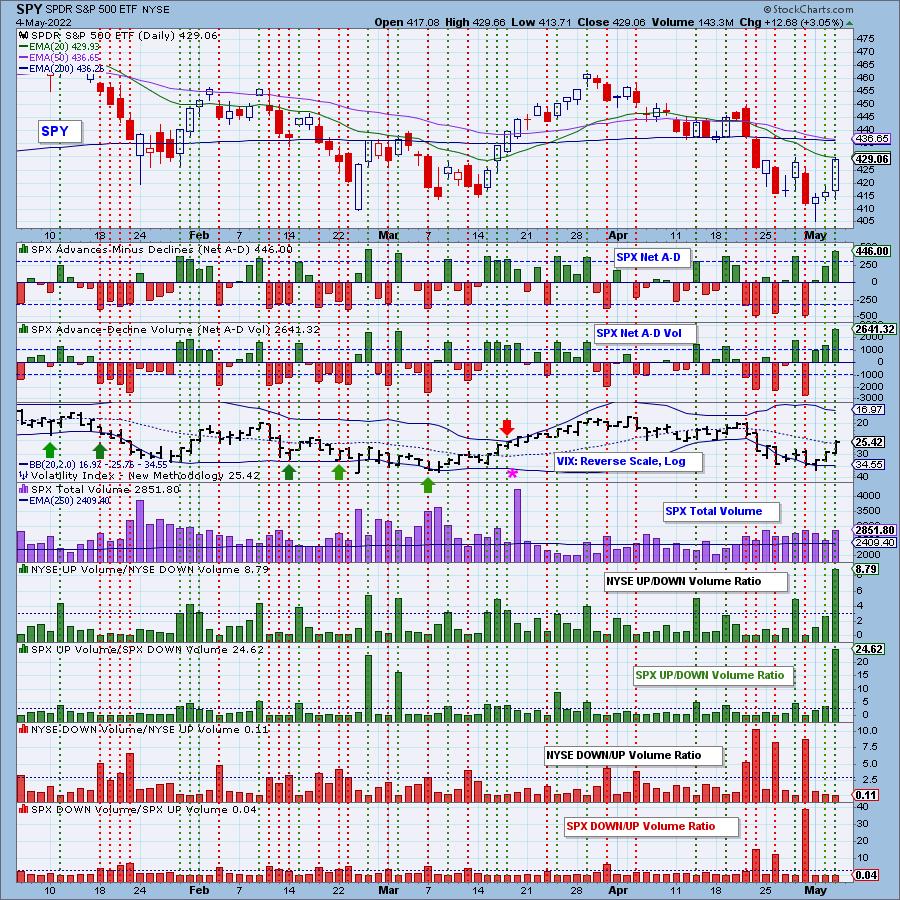 *A climax is a one-day event when market action generates very high readings in, primarily, breadth and volume indicators. We also include the VIX, watching for it to penetrate outside the Bollinger Band envelope. The vertical dotted lines mark climax days -- red for downside climaxes, and green for upside. Climaxes indicate either initiation or exhaustion.

Short-Term Market Indicators: The short-term market trend is DOWN and the condition is NEUTRAL.

STOs moved into positive territory today. We would consider their readings as mostly neutral given they have so much headroom to move higher, but we also note this was about as high as they got on the last price failure. We now have 60% of the SPX holding rising momentum. This is far healthier and could help prices push higher. 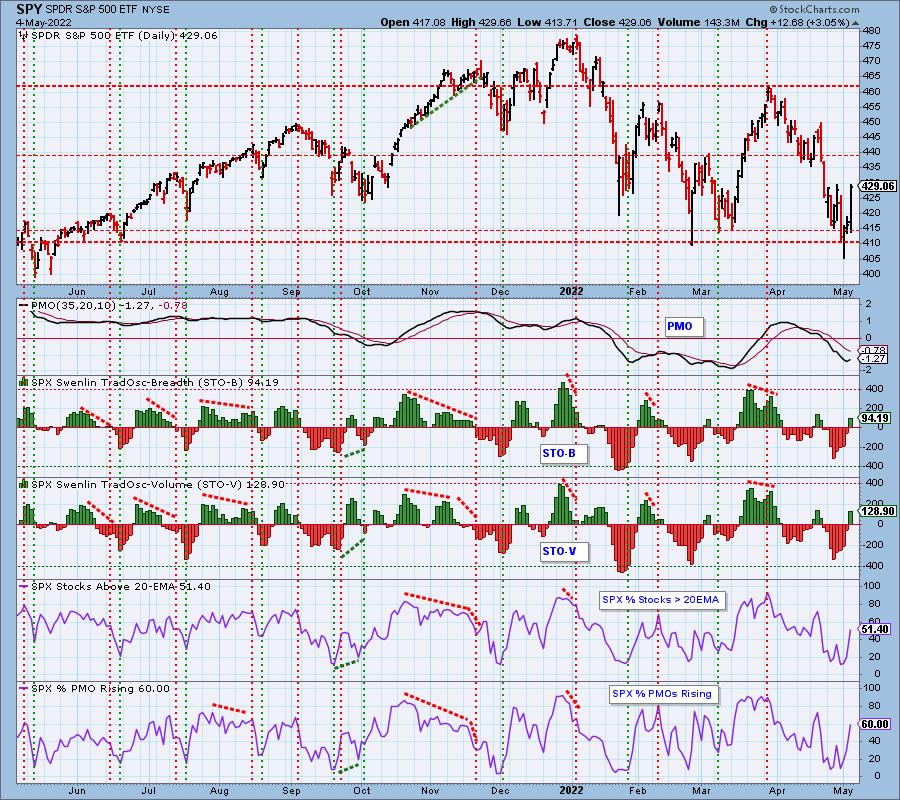 Intermediate-Term Market Indicators: The intermediate-term market trend is DOWN and the condition is SOMEWHAT OVERSOLD.

The ITBM/ITVM continue to contract out of negative territory which is bullish. We now see %Stocks with PMO Buy signs is oversold and has bottomed. 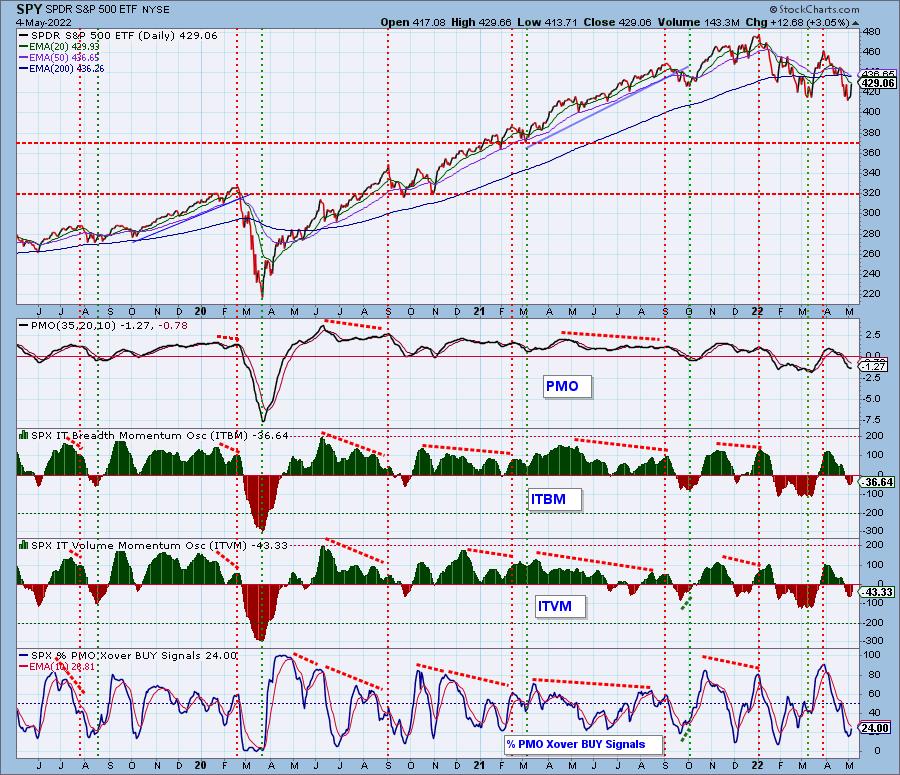 PARTICIPATION and BIAS Assessment: The following chart objectively shows the depth and trend of participation in two time frames.

The intermediate-term bias is still bearish. The SCI is attempting to turn up, but hasn't yet. The reading is also well below our 70% bullish threshold.

The long-term bias is bearish. The GCI is still in decline and %Stocks > 200-day EMAs is below the GCI percentage. 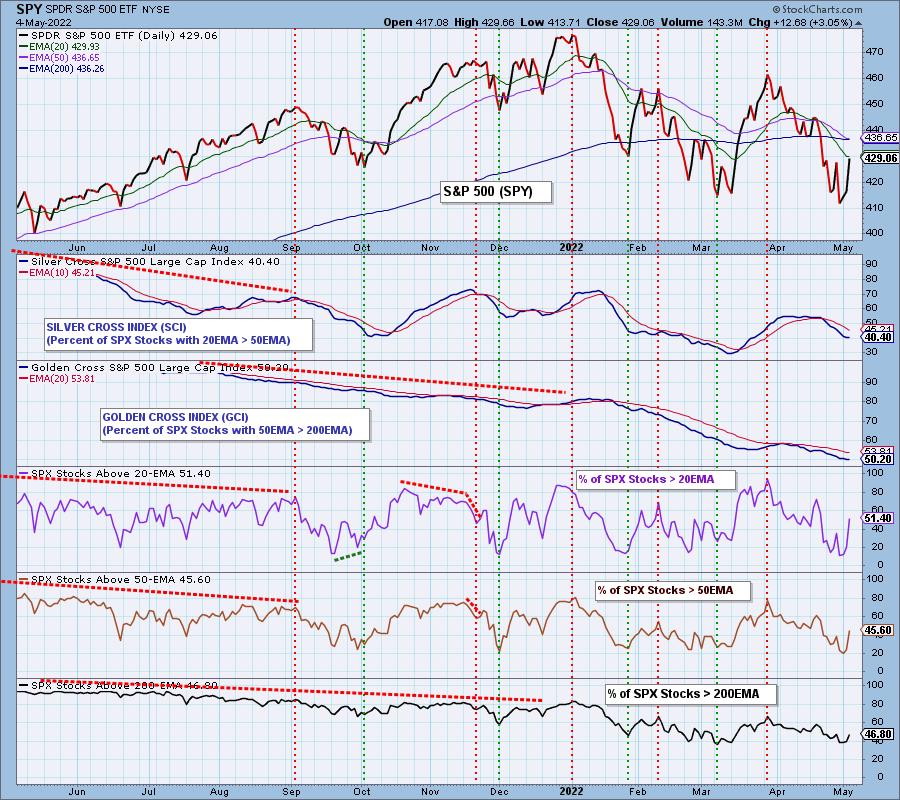 CONCLUSION: Investors decided that the rate hike was fine. It was the wording of the announcement that triggered the buying spree. Participation was broad and is showing improvement based on strong gains for %Stocks above their 20/50-day EMAs. STOs and more stocks with rising momentum suggest a continuation of today's rally. While this could be a bear market rally, we are still cautious given today's upside exhaustion climax. Resistance is near and this rally off news could just be a blow off event.

Erin is 15% exposed to the market, but considering small positions for the very short term. She doesn't intend to expose herself more than 25%.

Bitcoin rallied strongly off support at $37,500. Indicators are looking more bullish. The PMO is now rising toward a crossover BUY signal, the RSI is moving vertically toward positive territory above net neutral (50) and Stochastics turning up. However, overhead resistance at the 20/50-day EMAs hovers nearby. 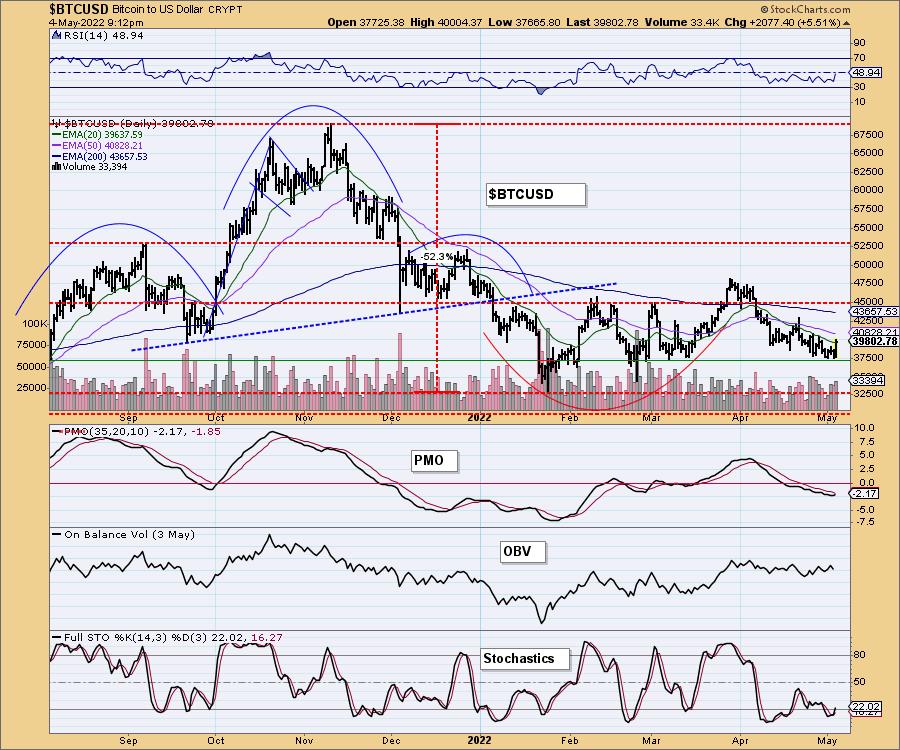 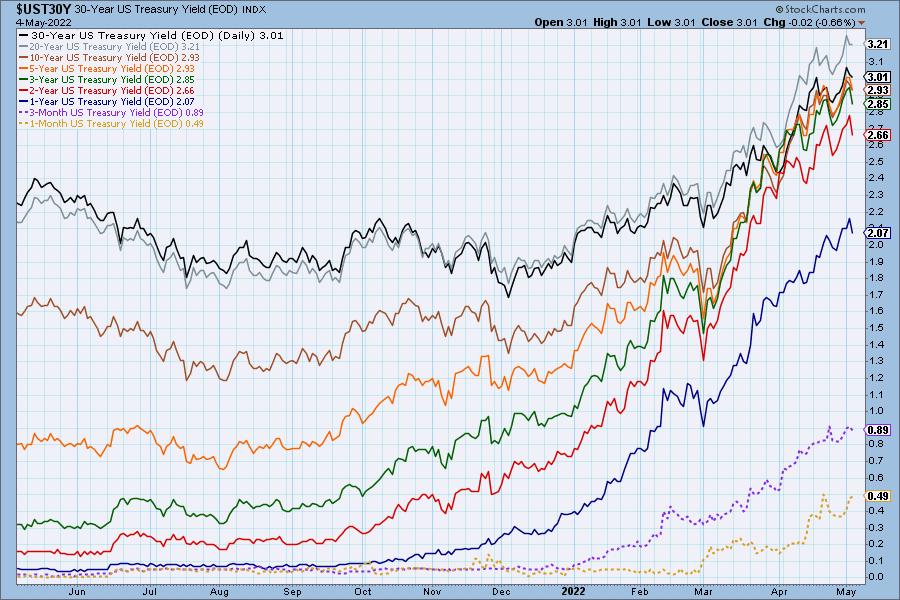 The Yield Curve Chart from StockCharts.com shows us the inversions taking place. The red line should move higher from left to right. Inversions are occurring where it moves downward. 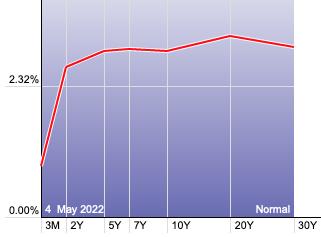 "$TNX was lower today, but the rising trend is far from being compromised. The RSI left overbought territory and the PMO managed to unwind somewhat on the last pullback." 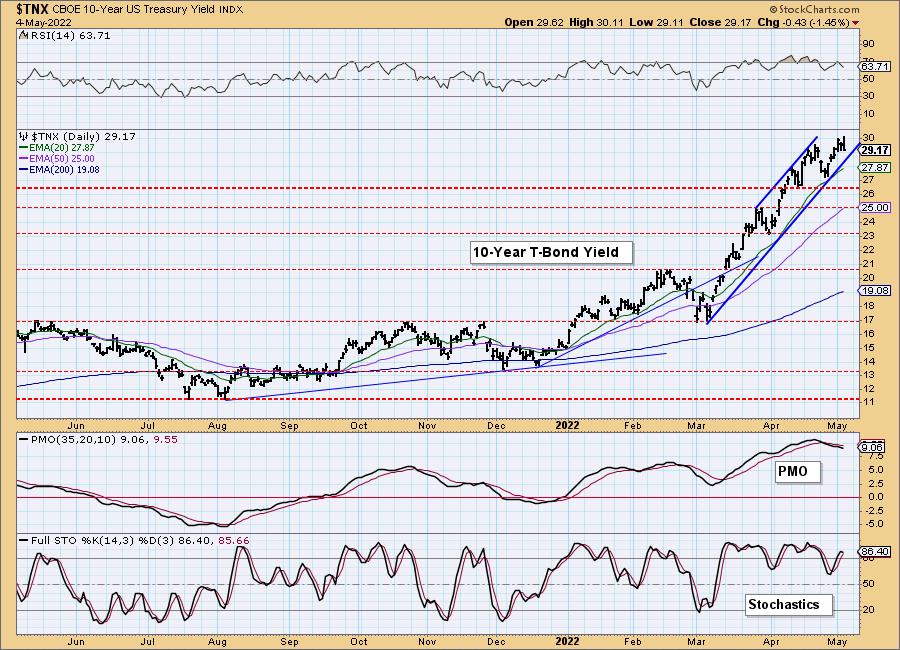 UUP Daily Chart: UUP continued its decline after its parabolic rise. The RSI and Stochastics still look mostly healthy, but the PMO top in overbought territory is very bearish. It's time for a pause or pullback on the Dollar and it appears we are in the midst of just that. This does look like a possible bullish flag formation developing. A test of the 20-day EMA would be healthy. 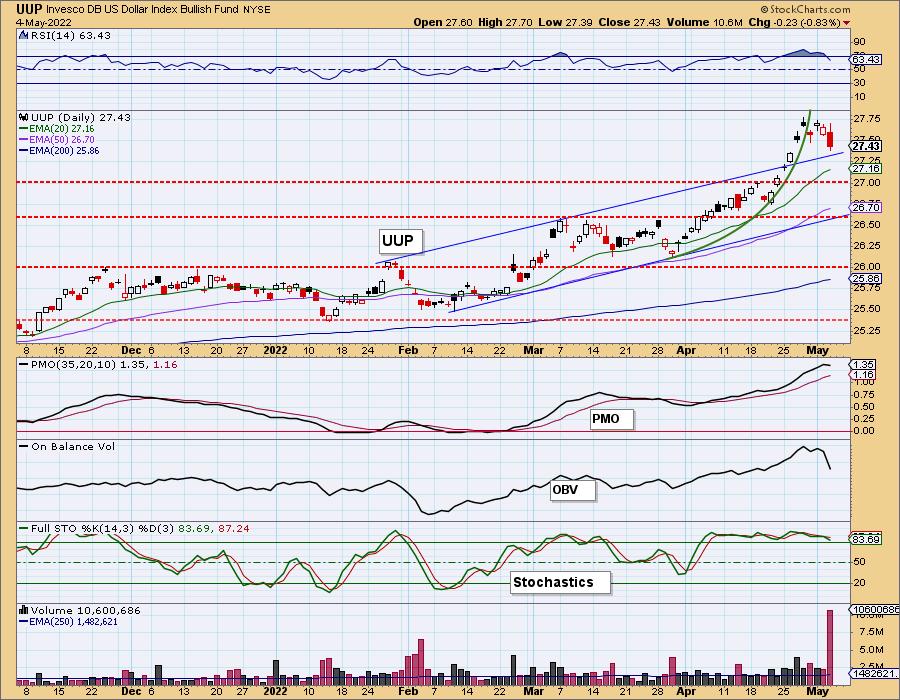 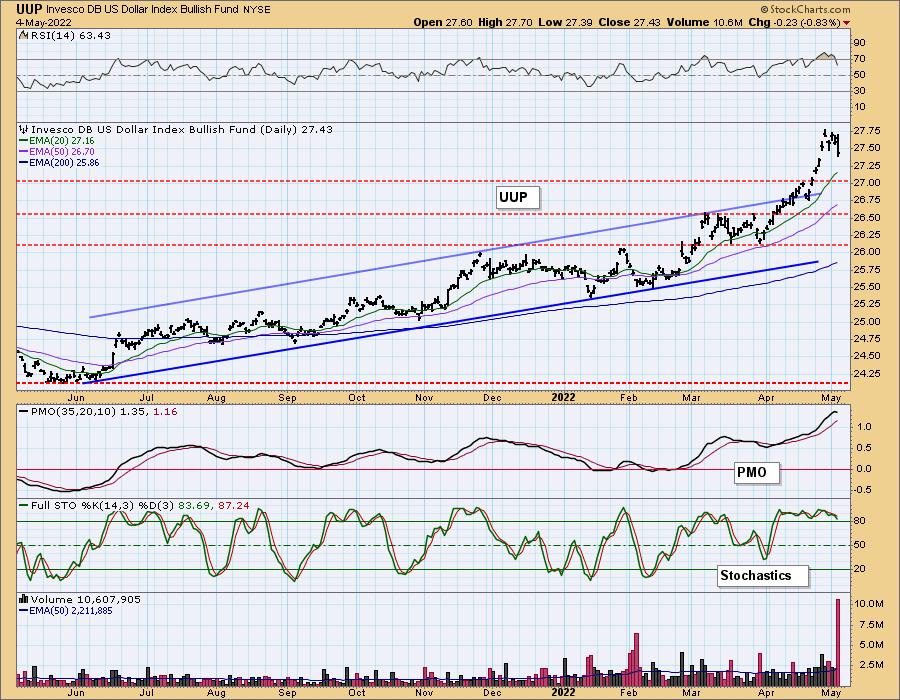 GLD Daily Chart: Gold took advantage of a falling Dollar and bounced in the support zone between $172.50 and $175. Two days of rally has the RSI rising again (but still negative) and the PMO has flattened. Stochastics don't have a heartbeat yet. This bounce coming in a strong support zone that preserves the rising trend drawn from the December low is encouraging. 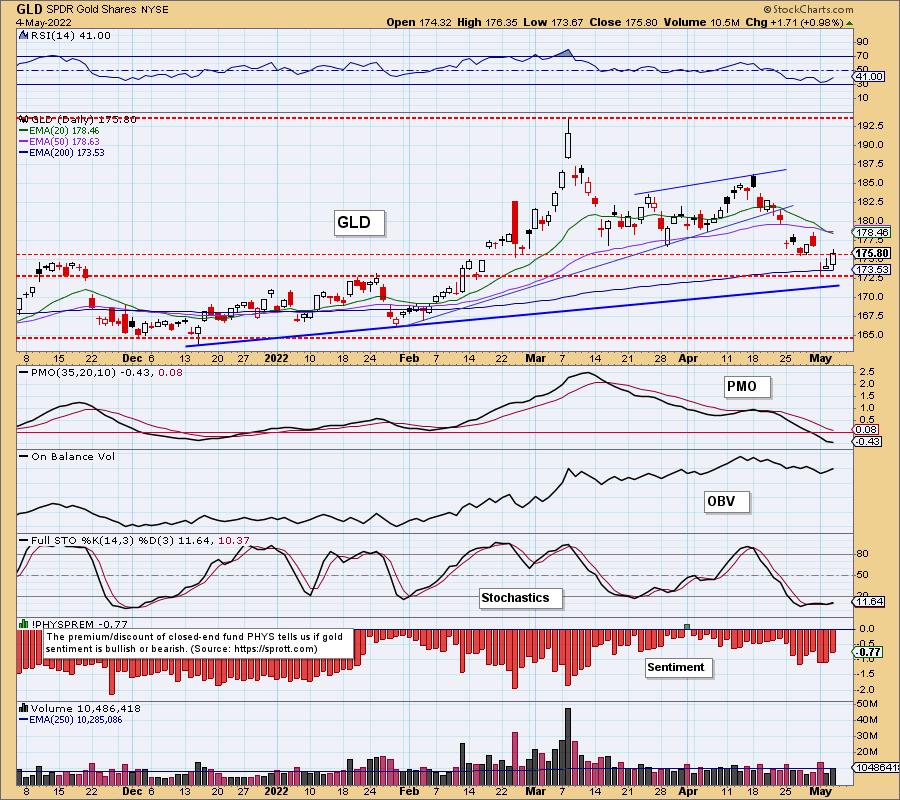 GOLD Daily Chart: Stochastics and the PMO aren't nearly as bullish as they are on GLD above. Stochastics have turned down in oversold territory and the PMO is still clearly in decline. Still, price is holding the 200-day EMA and support at $1850. 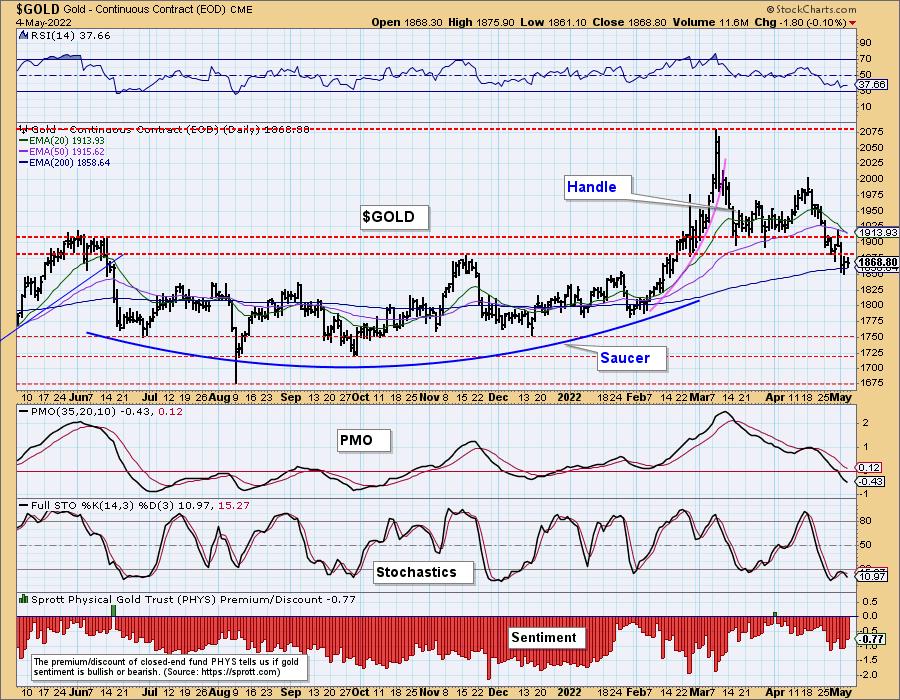 "GDX is bouncing off the 200-day EMA and support at the November high. While this is encouraging, indicators are not. Participation is not improving in a meaningful way. %Stocks > 20/50-day EMAs is paltry and the SCI is still declining quickly. The PMO is below the zero line and the RSI is in negative territory. Stochastics are mostly flat. Not enough positive data on this chart to imply this rally is sustainable." 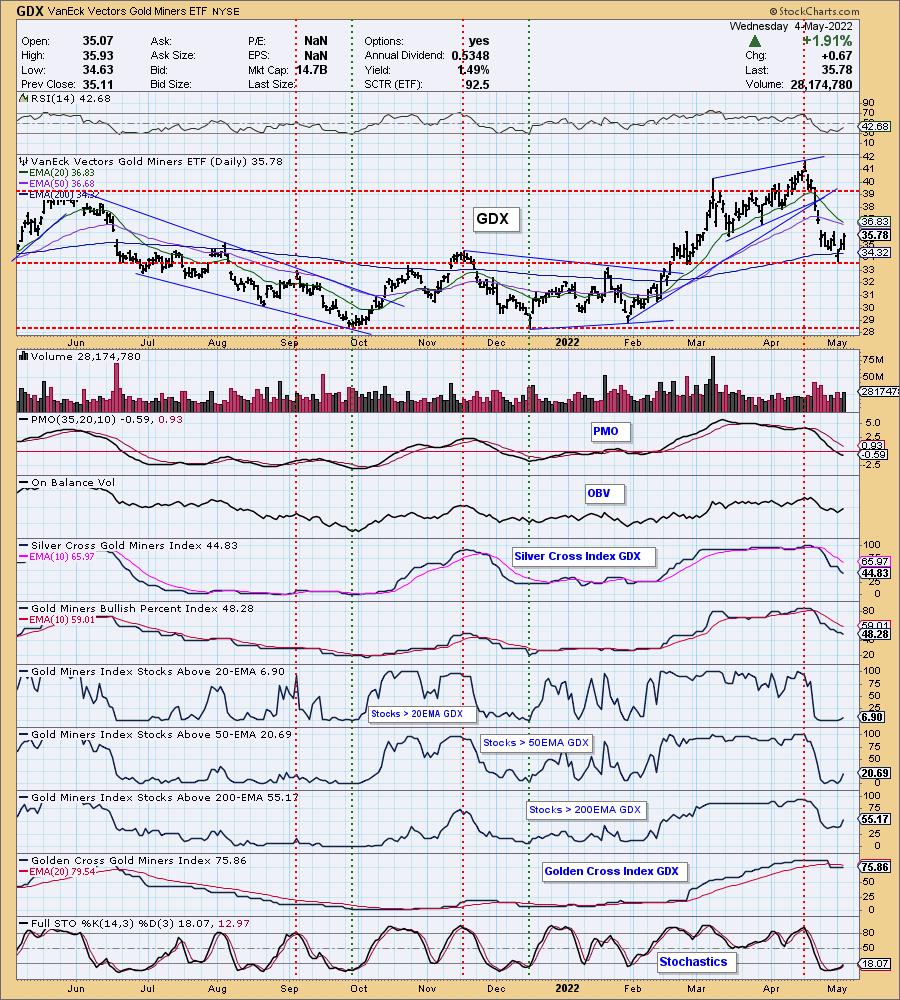 USO Daily Chart: Crude rallied strongly today and is now pushing against the top of a symmetrical triangle. These are continuation patterns so the expectation is an upside breakout. The RSI and Stochastics are rising in positive territory. The PMO has turned up. We expect the upside breakout will happen very soon. At that point, resistance at the March highs will need to be overcome. 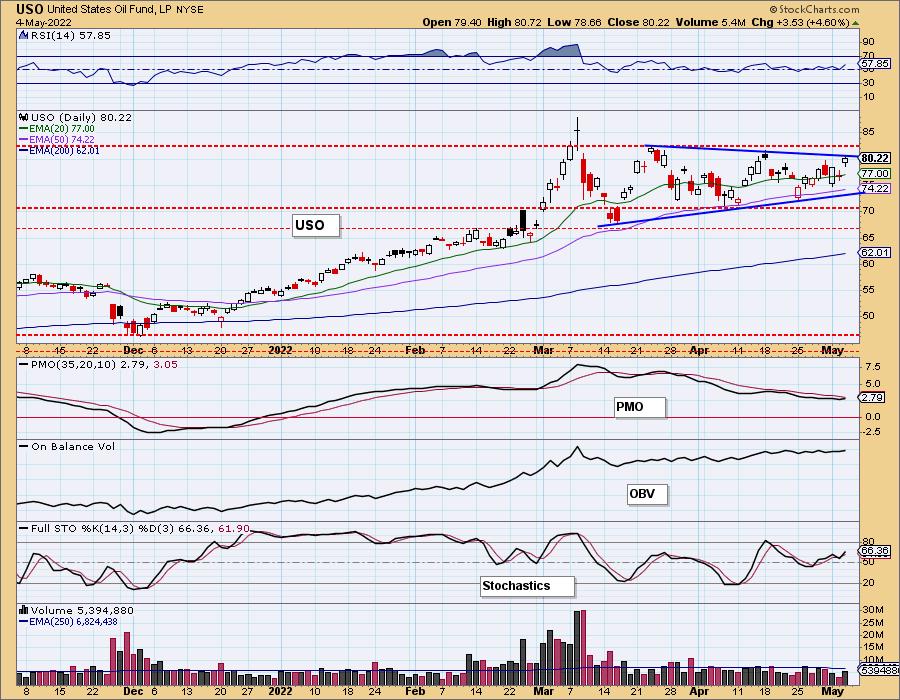 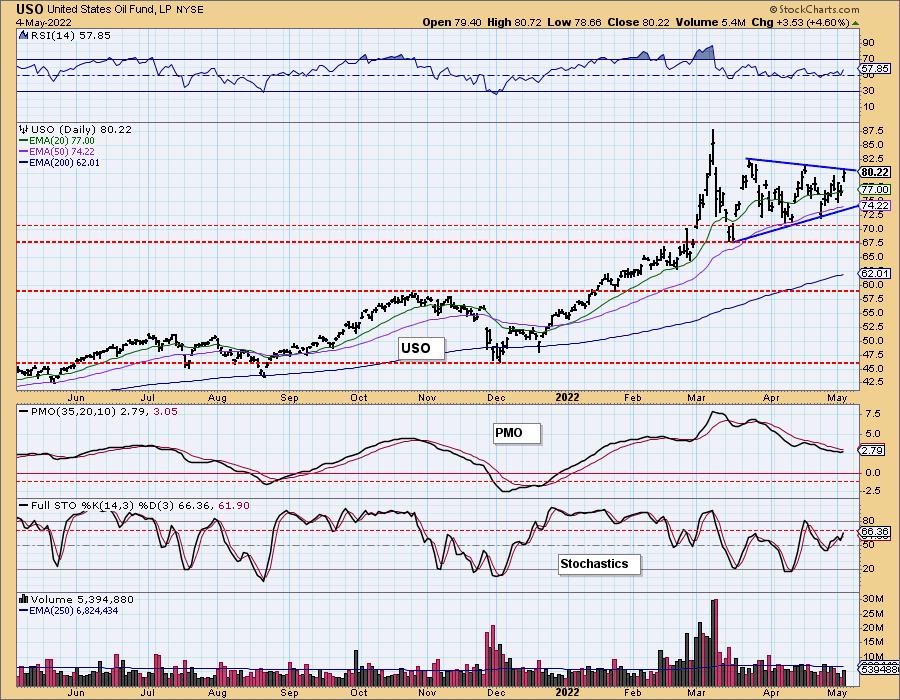 TLT Daily Chart: With rates declining somewhat today, TLT was able to put together another positive close. There is a bullish falling wedge and both Stochastics and the RSI are rising. The PMO hasn't taken a side yet. A breakout here seems likely, but we wouldn't expect a rally to make it past the 20-day EMA based on failures at that level nearly all year. 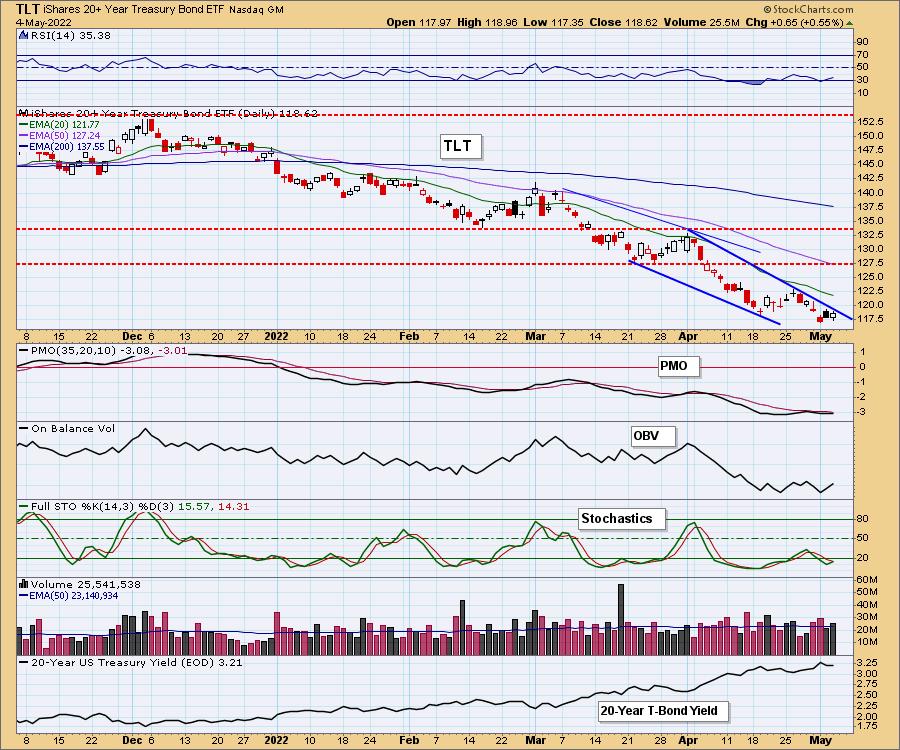 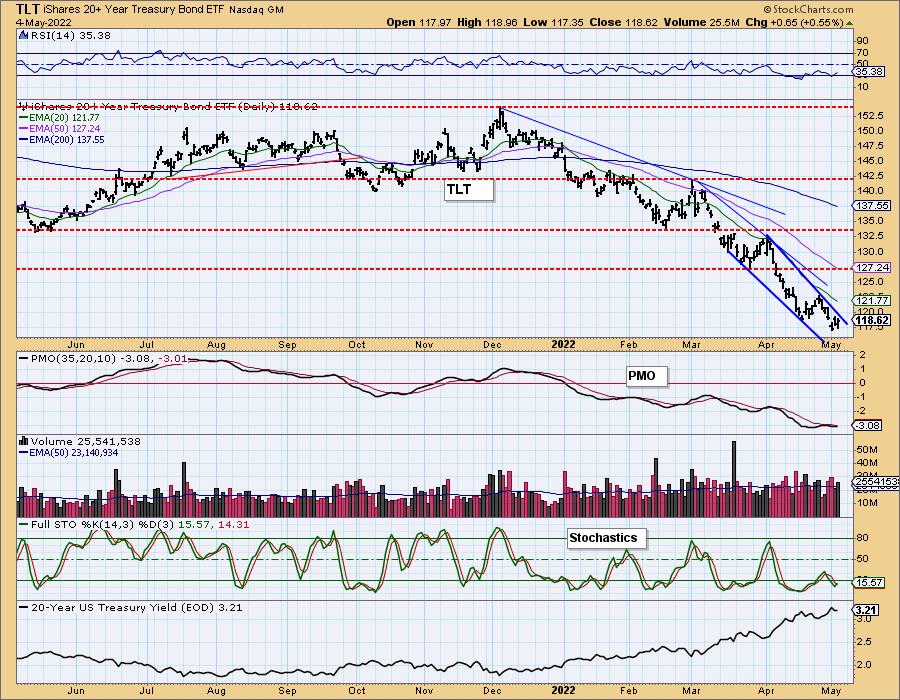 Technical Analysis is a windsock, not a crystal ball. --Carl Swenlin