Attention: your browser does not have JavaScript enabled!

Consumer Discretionary (XLY) broke out intraday yesterday, but today pulled back sharply. There were already issues "under the hood". There is now an ugly bearish double-top developing. The indicators are looking more bearish as today's top has now solidified negative divergences that were already building.

The RSI is still positive, but the PMO looks ready to generate a crossover SELL signal in extremely overbought territory. We have a negative divergence between price tops and OBV tops. The Silver Cross Index (SCI) had a negative crossover today. Note that participation had already begun to wane. That set up more negative divergences on today's top. Clearly XLY has had a relative strength leadership role in pushing the SPY higher. If this sector continues to break down, it is likely we will see the SPY move lower as well. 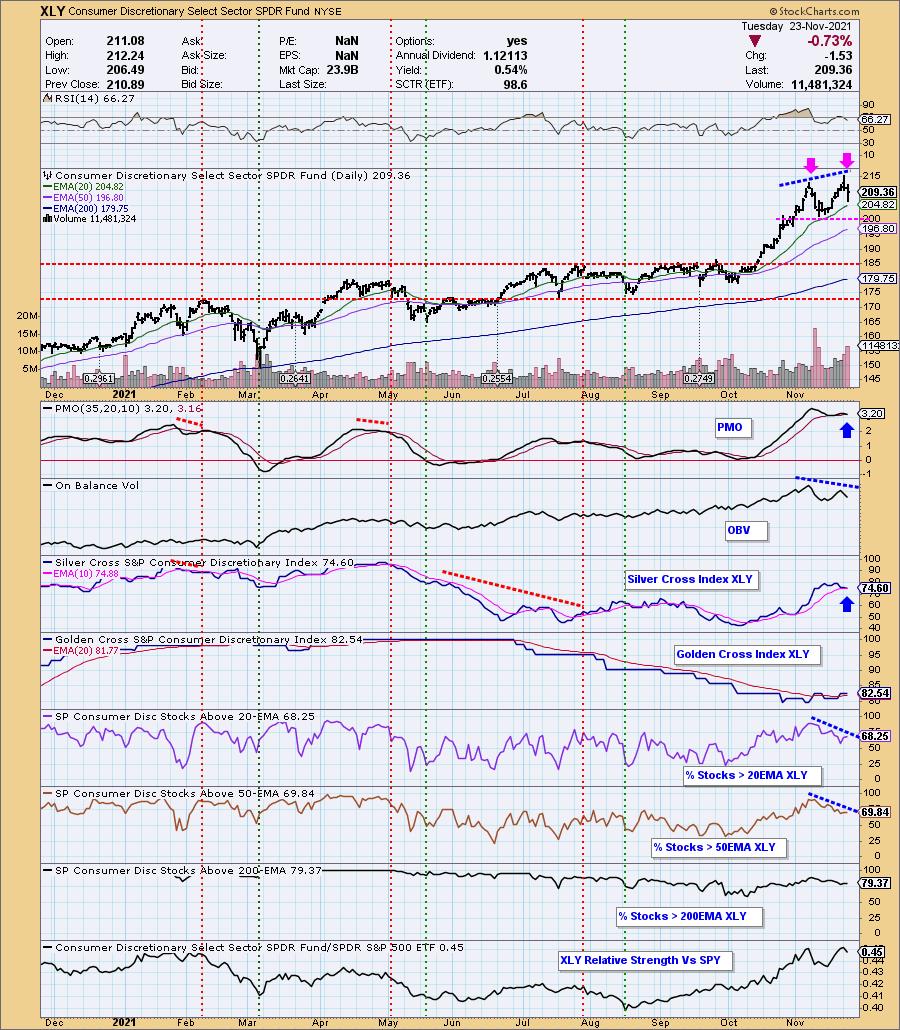 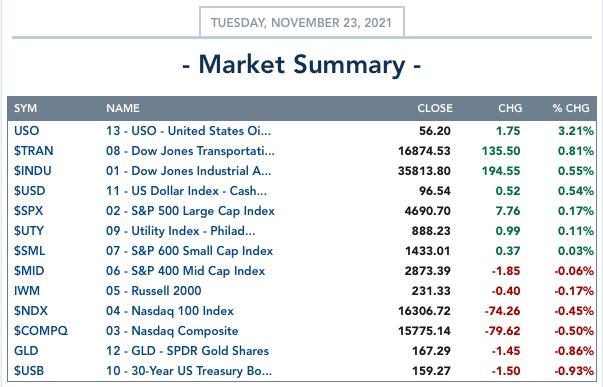 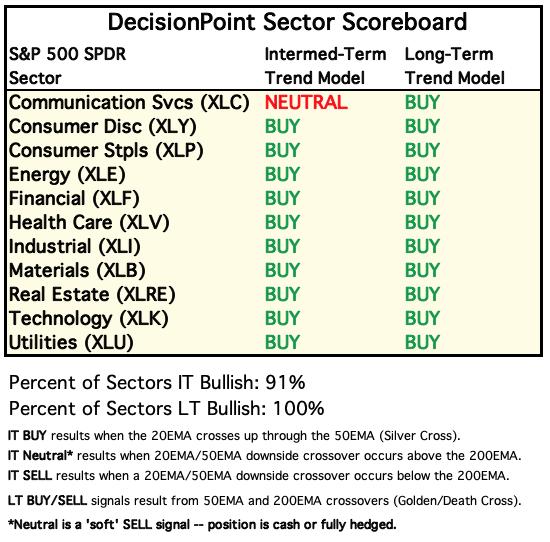 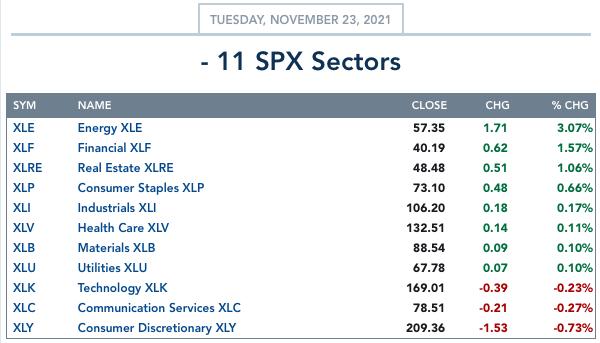 RRG® Chart: The biggest change today would be XLB leaving the Leading quadrant. XLY is hooking back up which is bullish; however, as noted in today's opening, there are some problems "under the hood". XLK is Leading but losing ground and traveling in the bearish southwest direction. XLC is losing relative strength and is likely to hit Lagging next week. XLE is trying to hook around in Lagging. XLV, XLRE, XLP and XLU have the strongest configuration as they travel in the bullish northeast direction. XLI has a bearish southwest heading but is still holding in Improving. 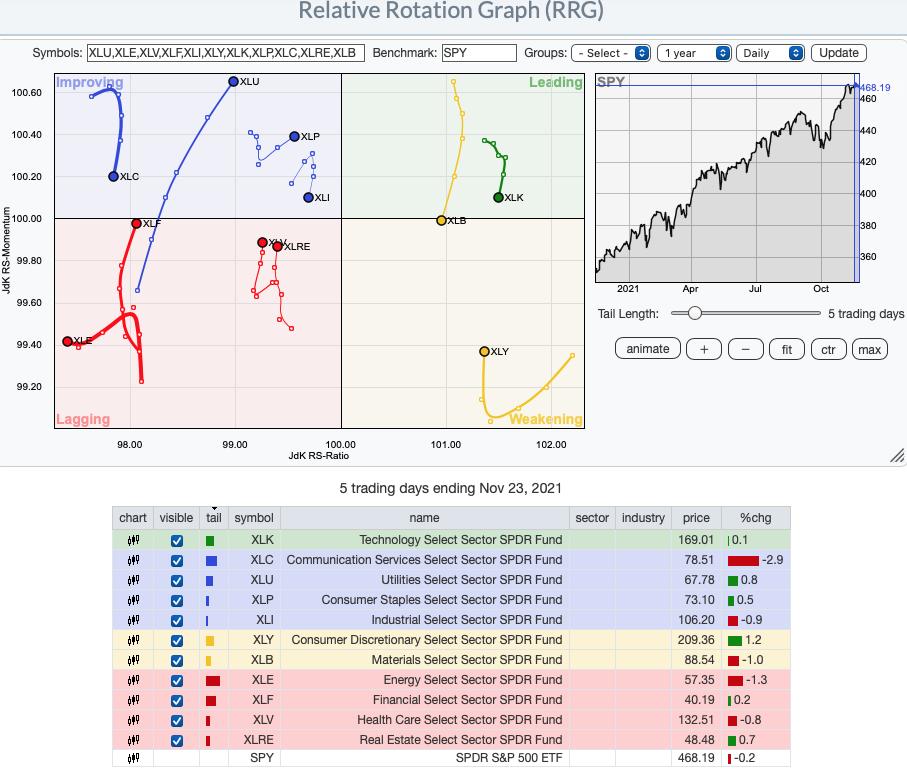 CLICK HERE for an animated version of the RRG chart.

SPY Daily Chart: There two things that have me concerned after today's trading. The PMO triggered a crossover SELL signal and like XLY, is now forming a bearish double-top. Currently price is seated above support at the 20-EMA and November trough. 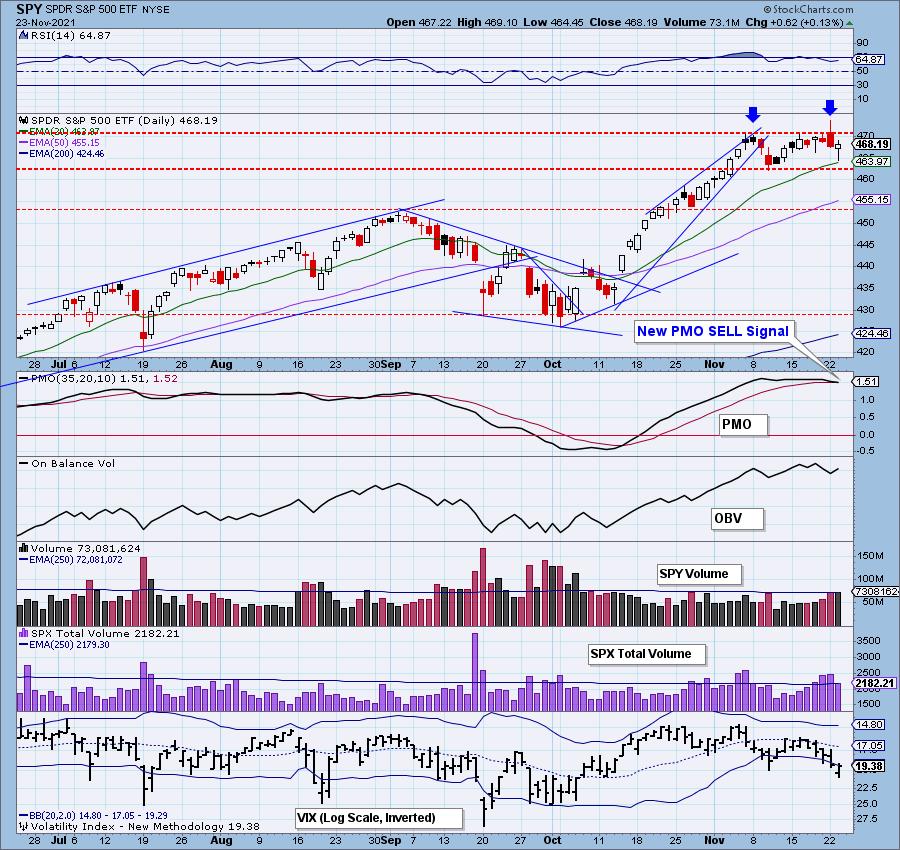 Total Volume was elevated and finished slightly above the annual average. This is interesting given we are in the midst of what should be "holiday trading". Stochastics are traveling quickly lower and should reach negative territory below net neutral (50) soon which is a problem in the short term. However, the VIX has punctured the lower Bollinger Band on the inverted scale and that generally leads to a day or two of higher prices. 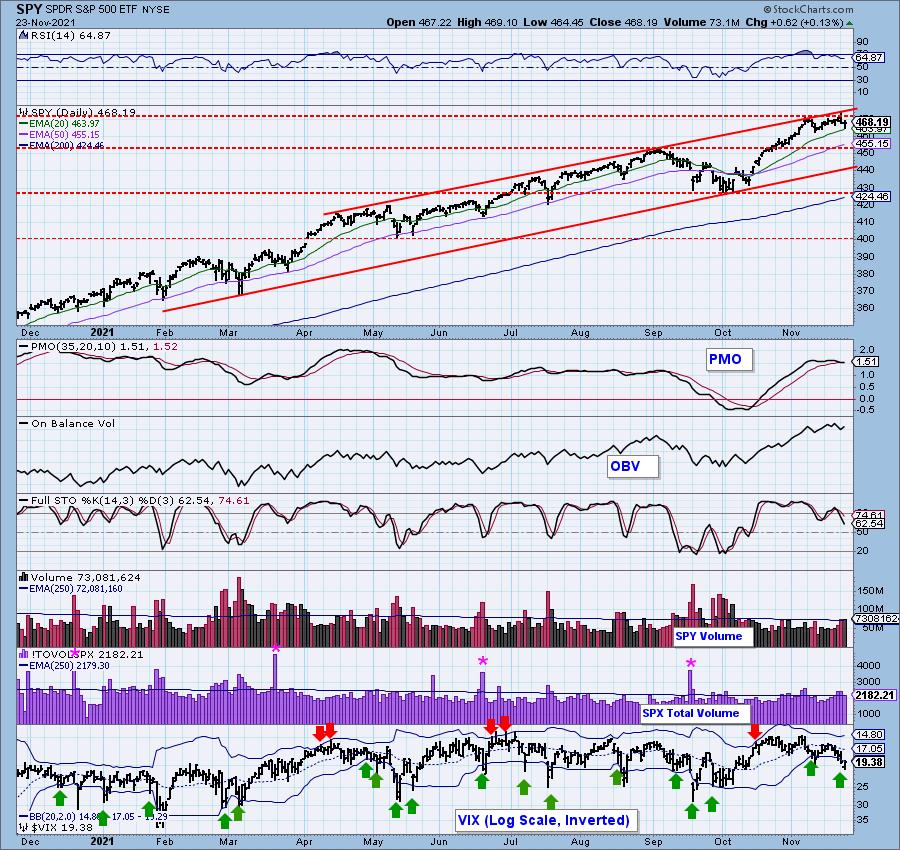 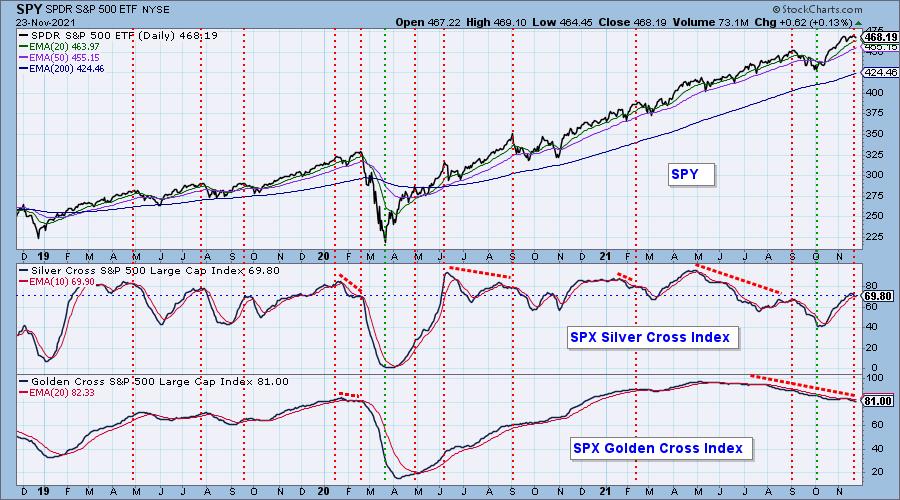 S&P 500 New 52-Week Highs/Lows: New Highs contracted considerably today. The 10-DMA of the High-Low Differential is continuing to move lower which is bearish for the market. 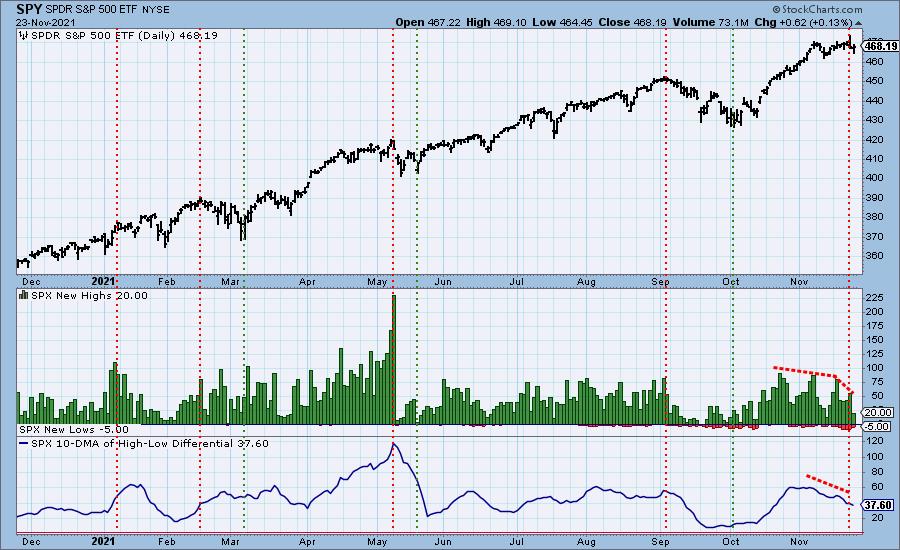 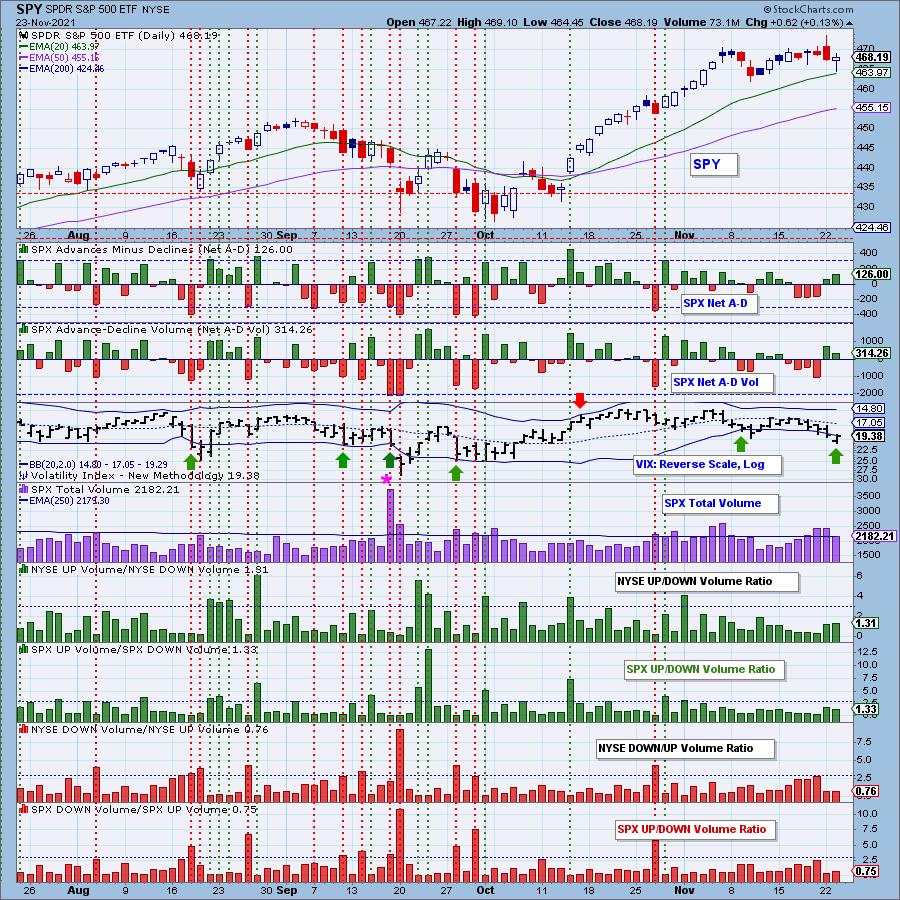 *A climax is a one-day event when market action generates very high readings in, primarily, breadth and volume indicators. We also include the VIX, watching for it to penetrate outside the Bollinger Band envelope. The vertical dotted lines mark climax days -- red for downside climaxes, and green for upside. Climaxes are either initiation or exhaustion.

Short-Term Market Indicators: The short-term market trend is UP and the condition is OVERSOLD.

The STOs were mixed with the STO-B continuing lower and the STO-V turning back up. I like the look of this, but I also know that these indicators can move further oversold and until they are moving up in concert, I am not looking at this as bullish. We did see improvement on %PMOs Rising, but it is still unhealthy at less than 50%. 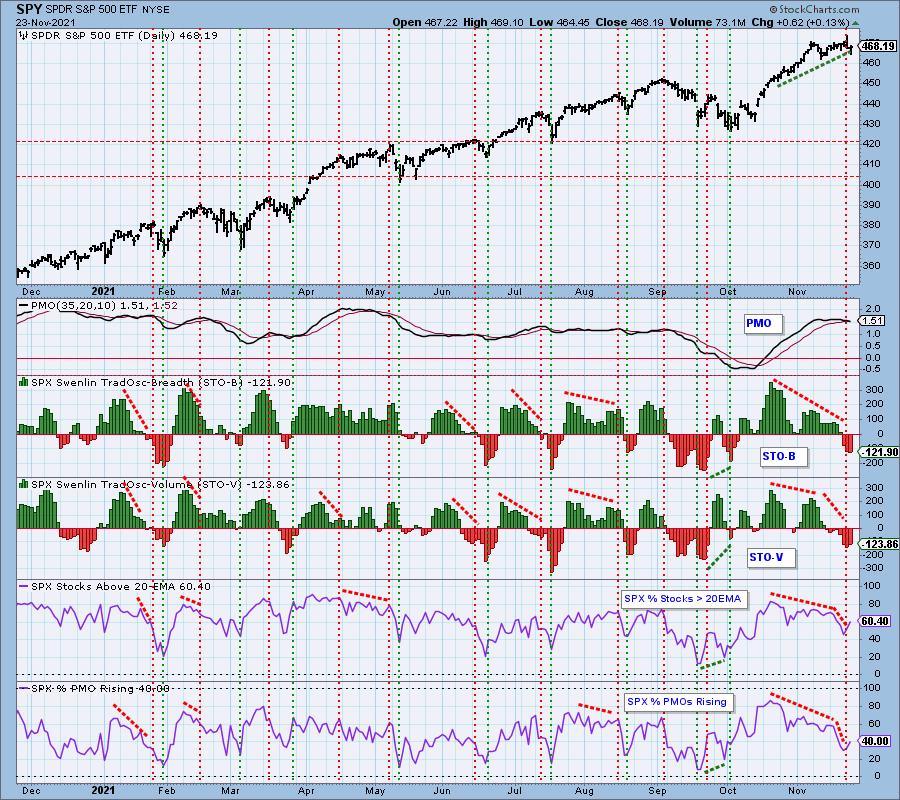 Intermediate-Term Market Indicators: The intermediate-term market trend is UP and the condition is OVERBOUGHT.

The ITBM/ITVM continue to decline. They are still somewhat overbought and we have fewer stocks on PMO crossover BUY signals. The negative divergence on that indicator is stark and suggests lower prices in the intermediate term. 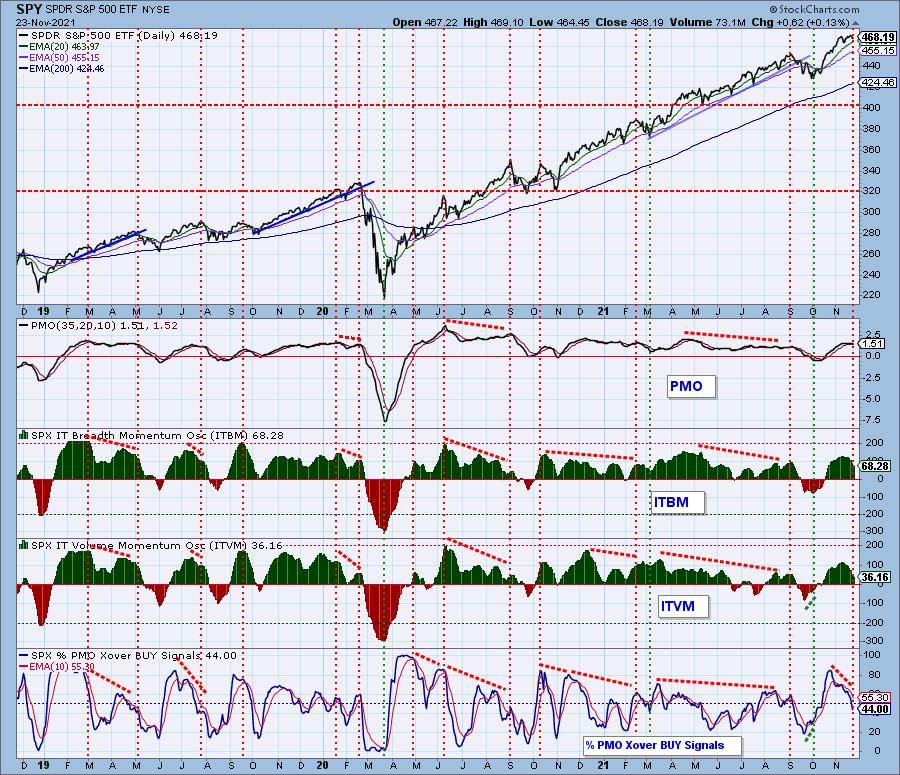 Bias Assessment: Participation did improve today with an expansion of stocks > 20/50/200-EMAs. However, the short-term bias is still bearish given participation percentages of stocks > 20/50-EMAs are below the SCI. %Stocks > 200-EMA is lower than the GCI so it will likely continue even lower. 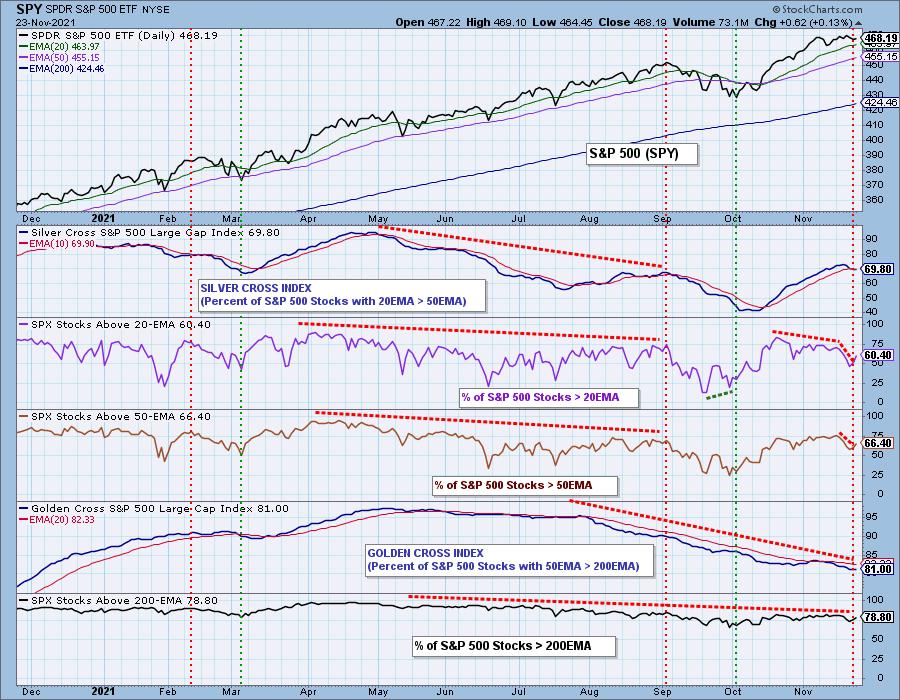 CONCLUSION: We may have seen an up day, but it didn't do much to improve our primary indicators. In fact, we have a PMO SELL signal and the SCI and Stochastics falling. Add to that the possible formation of a double-top, mixed STOs and falling ITBM/ITVM coupled with a declining GCI and we have a recipe for an intermediate-term decline. The one bright spot would be the extended VIX and price landing and holding above the 20-EMA. There is a strong possibility we will see a continuation of today's positive finish before week's end. I just don't see it lasting.

My stops haven't triggered yet, so I am 75% exposed to the market with 25% being in cash and readily available to trade.

Bitcoin attempted to recapture prior support at the late October low, but wasn't successful. Still this is a promising reversal, one that could set up a bullish double-bottom. The RSI is reversing but remains negative. The PMO and Stochastics are in decline. The indicators suggest this resistance level will hold a bit longer, but the picture is at least getting somewhat brighter for Bitcoin. 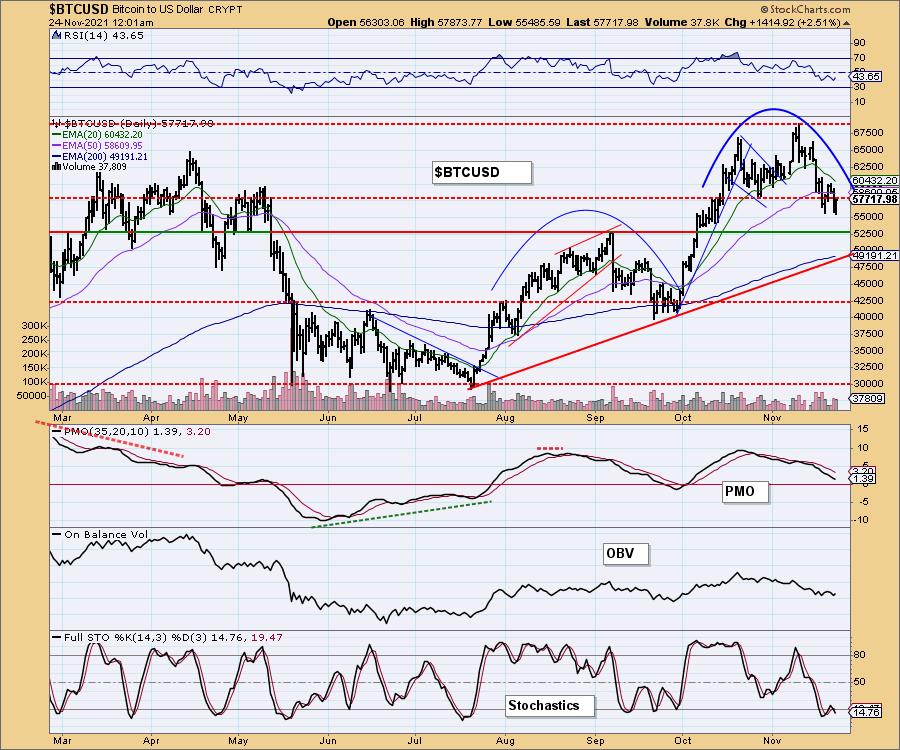 Yields are reversing course from last week and remain in rising trends. 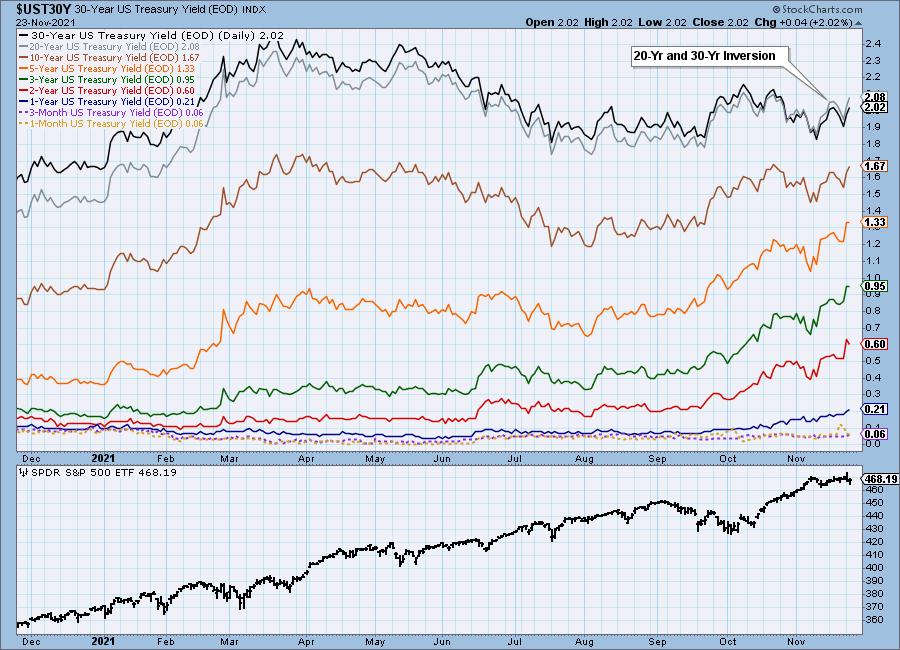 $TNX continued to fly higher today up over 2.5 basis points. This has pushed $TNX out of the symmetrical triangle. The pattern suggested an upside breakout would occur given it formed off a rising trend out of the August low. Now resistance is ahead at the October high. Given the new PMO crossover BUY signal, rising Stochastics and positive/rising RSI, I expect to see the 10-year yield test the March highs. 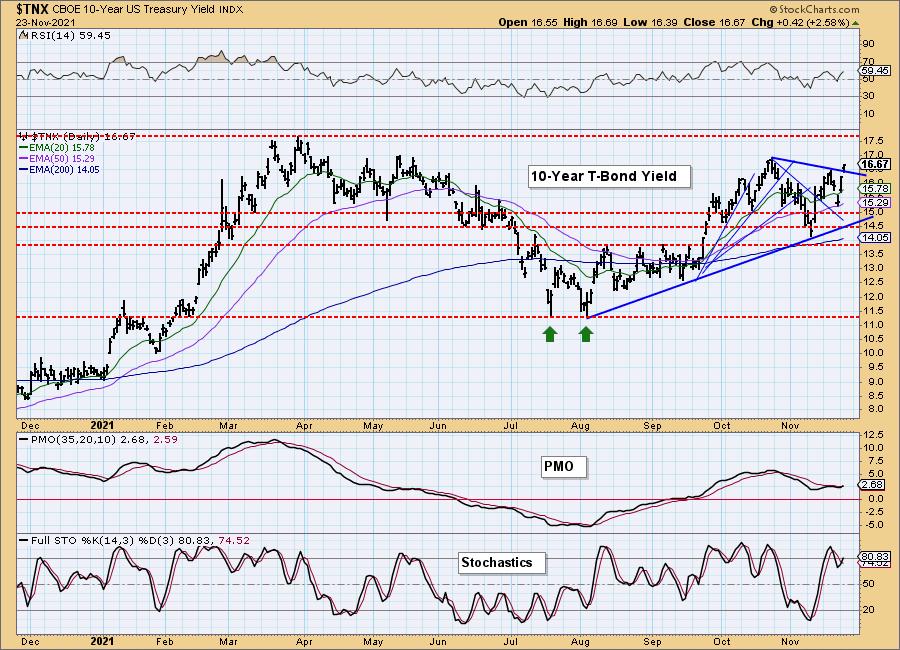 UUP Daily Chart: The Dollar was mostly unchanged today. The RSI is now overbought but not exceedingly so. The PMO is rising nicely and Stochastics are very positive. I expect to see the rising trend continue for the Dollar. 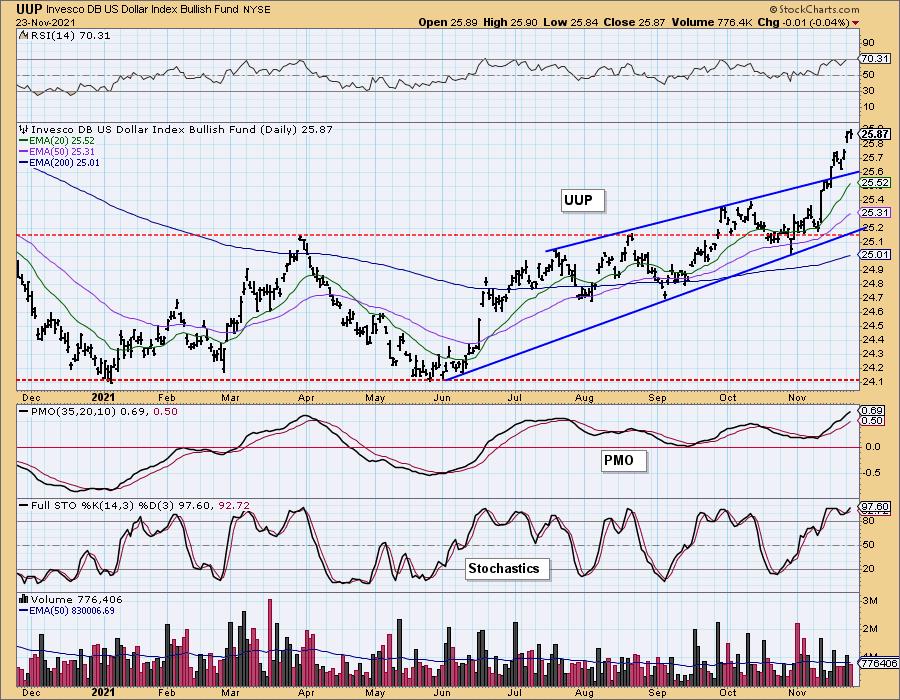 GLD Daily Chart: GLD continued to plummet lower, but it isn't over yet. The short-term rising trend remains intact and we still see a rounded bottom basing pattern. Discounts haven't really expanded so despite the big decline, investors aren't getting anymore bearish. 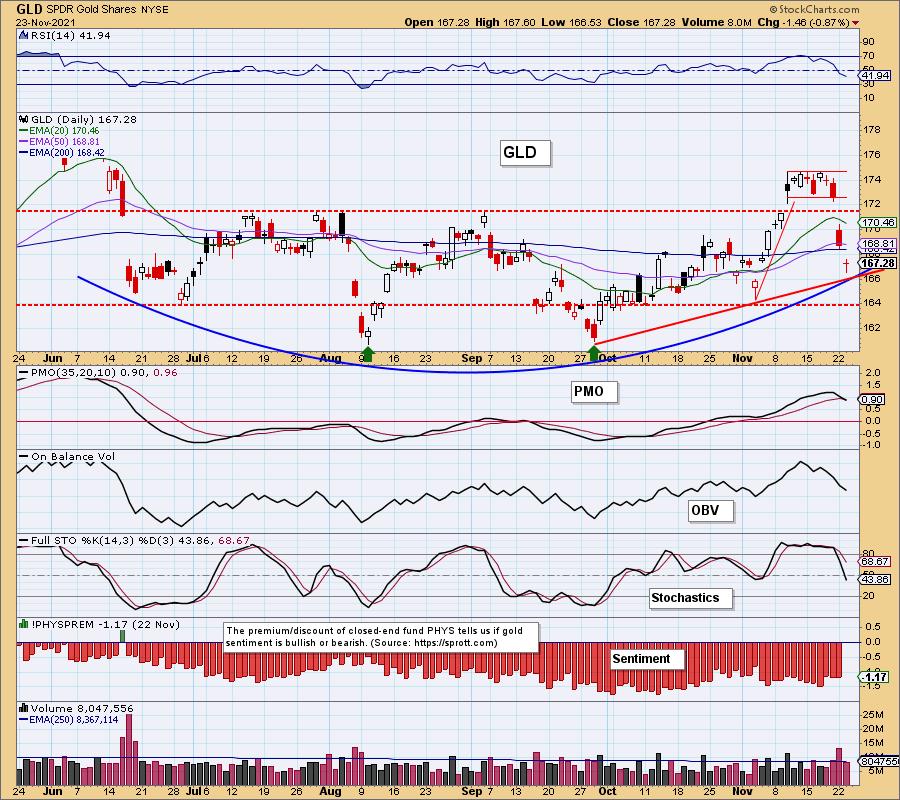 (Full Disclosure: I own GLD as a "buy and hold" position.)

GOLD Daily Chart: The PMO had a negative crossover SELL signal generate today and the RSI/Stochastics are negative and falling. That tells us that Gold is in a very weak configuration. It wouldn't surprise us to see price test $1720, but for now, Gold still has the ability to reverse off the rising trend. 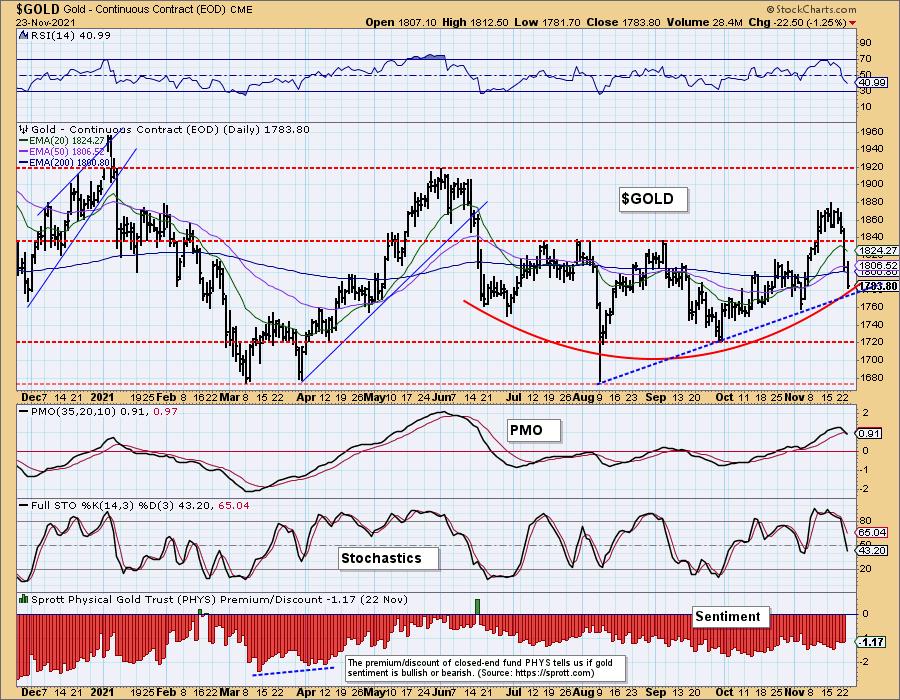 GOLD MINERS Golden and Silver Cross Indexes: Gold Miners are likewise testing their short-term rising trend. The RSI moved negative and today GDX saw a PMO crossover SELL signal. We saw a similar configuration at the early November low so we could see a reversal. I personally have tightened the stop on my Gold Miner position given the drop below the 50-EMA. It will trigger if the rising trend on my particular stock is broken. The SCI is still at a bullish reading of 87%, but participation has dropped like a rock so tread carefully. 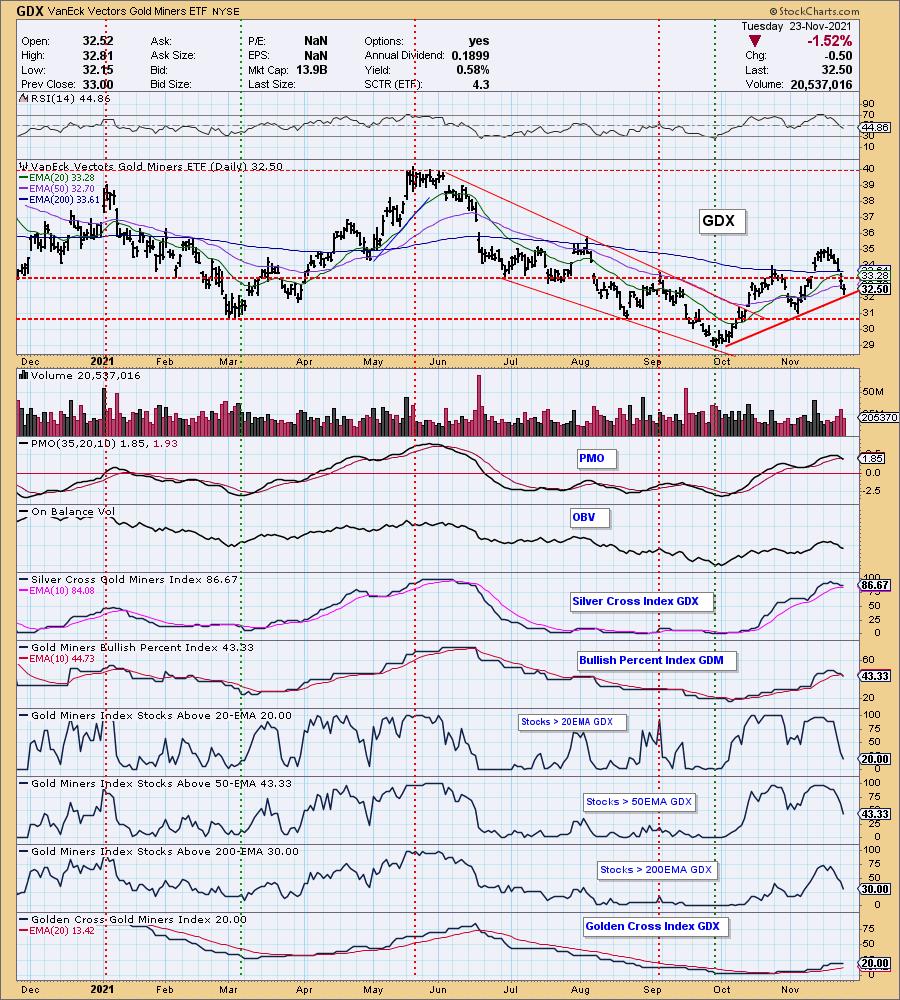 USO Daily Chart: I wasn't optimistic yesterday that Crude Oil would rebound here, but apparently the bullish falling wedge was prescient as price broke out of the pattern and finished above the 20-EMA for the first time since the November slide began. The RSI has reversed and is now in positive territory and the PMO has bottomed. We have a slight positive OBV divergence and Stochastics are reversing out of oversold territory. 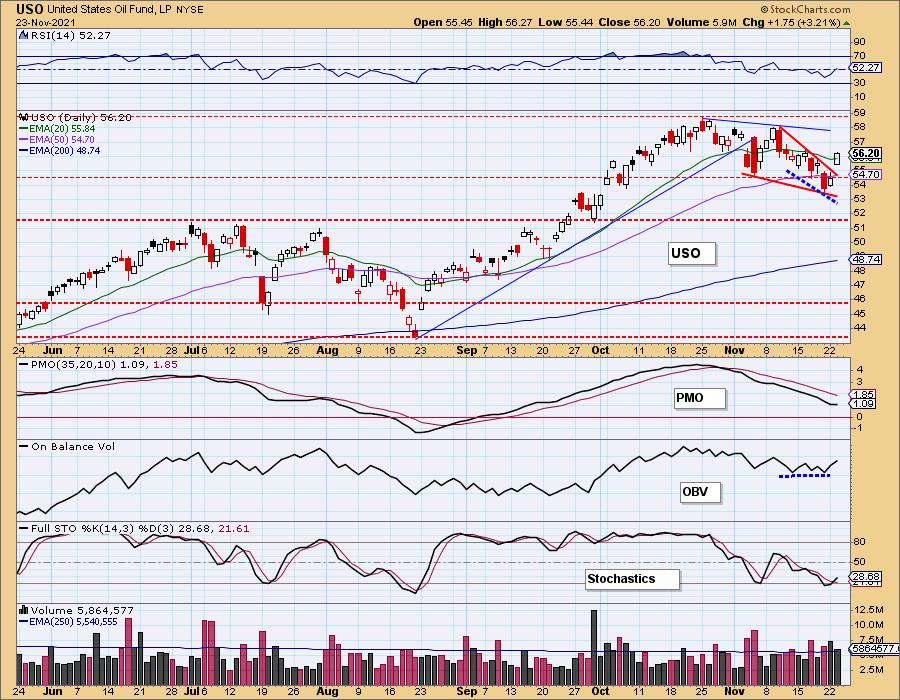 I see a bullish flag formation now on USO, but ultimately in the short term it is in a declining trend channel. With the bullish reversal on our indicators, I think we can expect to see higher Crude Oil prices moving forward. 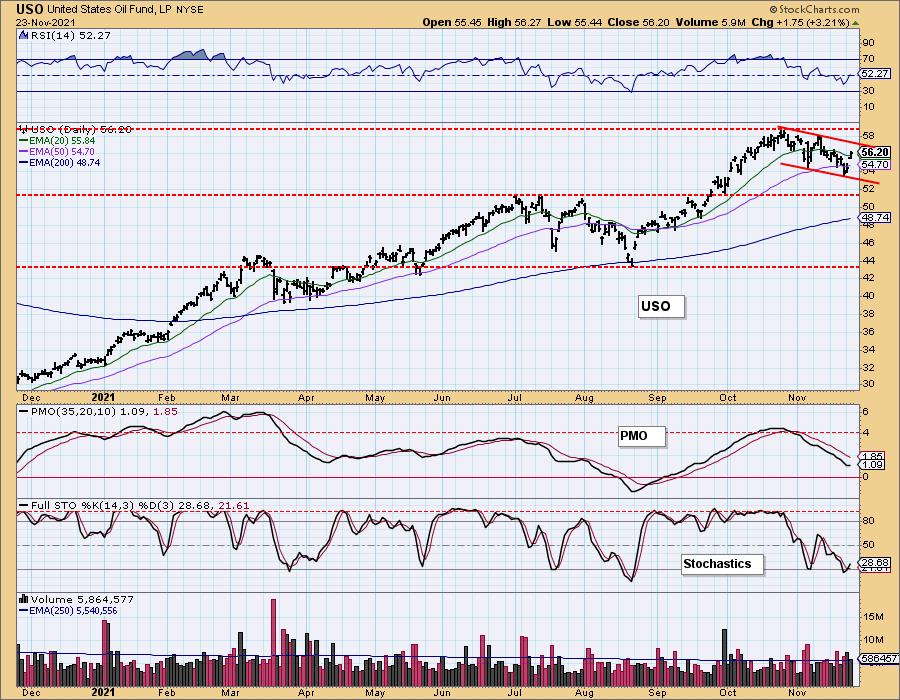 TLT Daily Chart: TLT is now testing last week's low. The RSI is negative and falling. The PMO triggered a crossover SELL signal today and OBV tops are confirming the decline. Stochastics have turned down in negative territory. Given the bullish yield charts and negative indicators on TLT, look for a test of the October lows at $141. 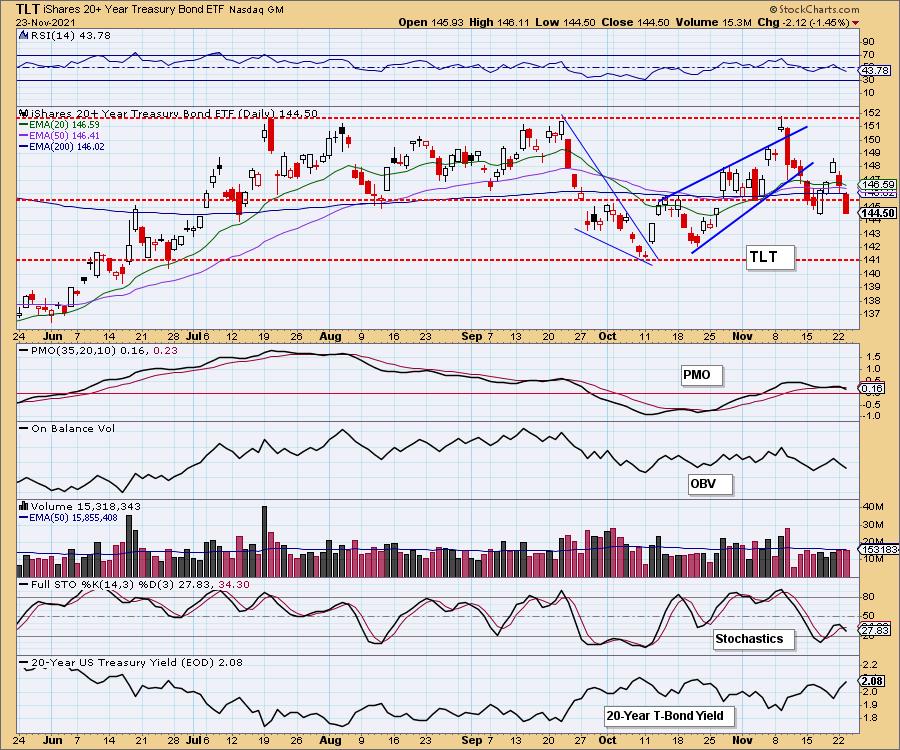 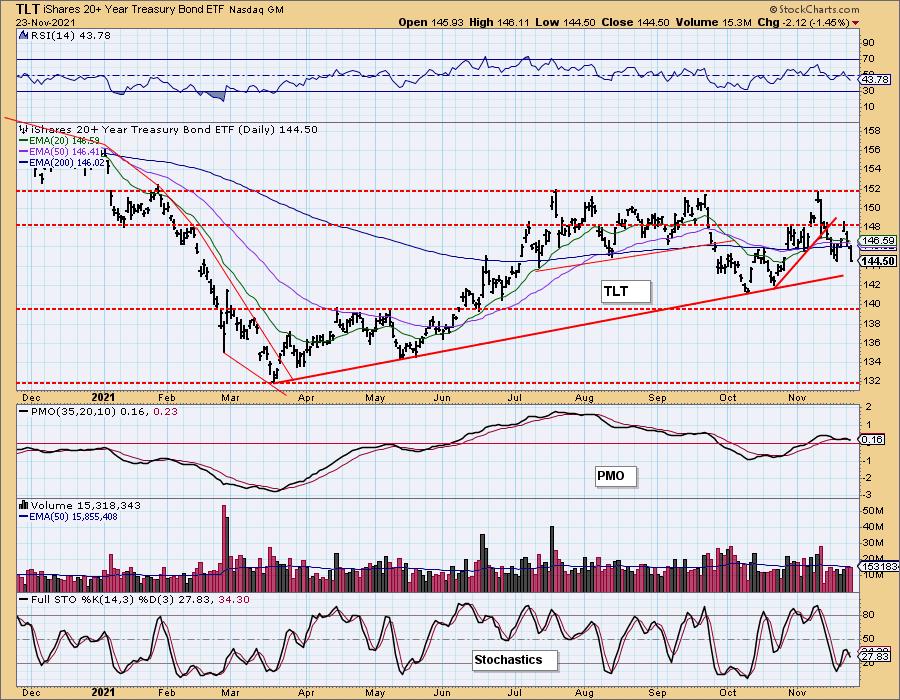