It appears the rally is real in the Dollar. Today, the 20-EMA began its cross above the 50-EMA generating an IT Trend Model BUY signal or "silver cross". The PMO reached positive territory this week, joining the RSI which was already in positive territory. There is a bullish double-bottom pattern that was technically confirmed with today's breakout above the confirmation line at the February top. However, we'll be more convinced when overhead resistance is broken on this current rally. 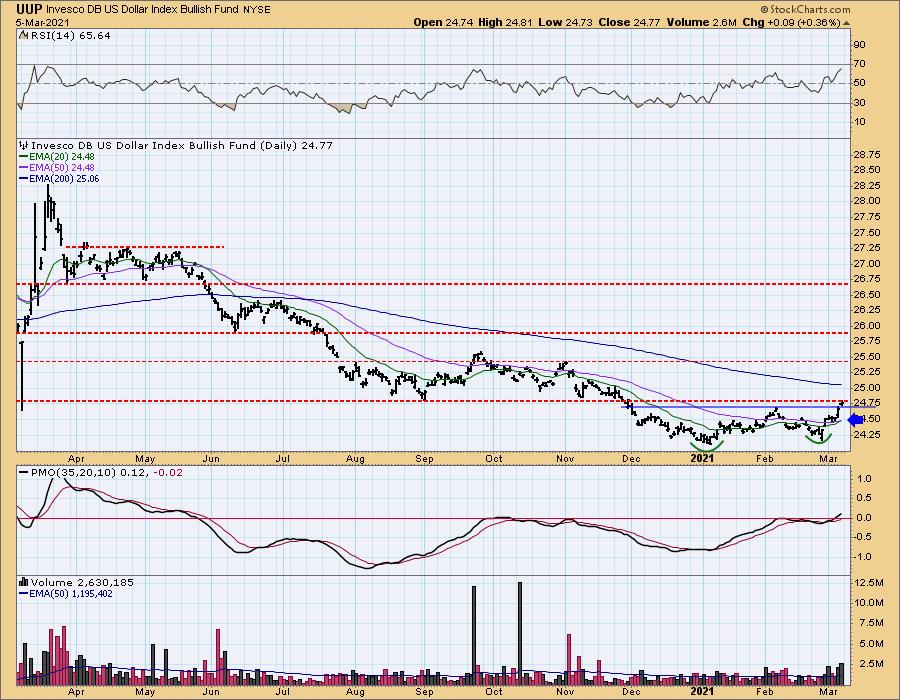 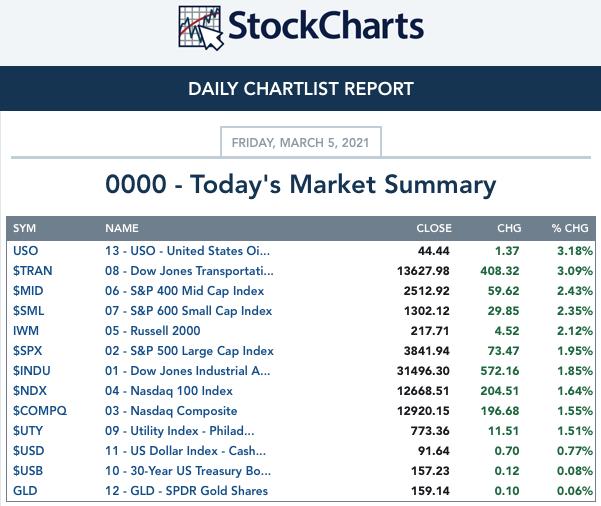 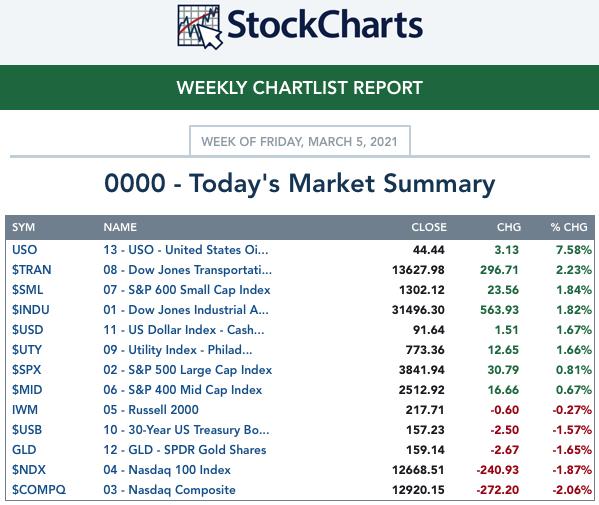 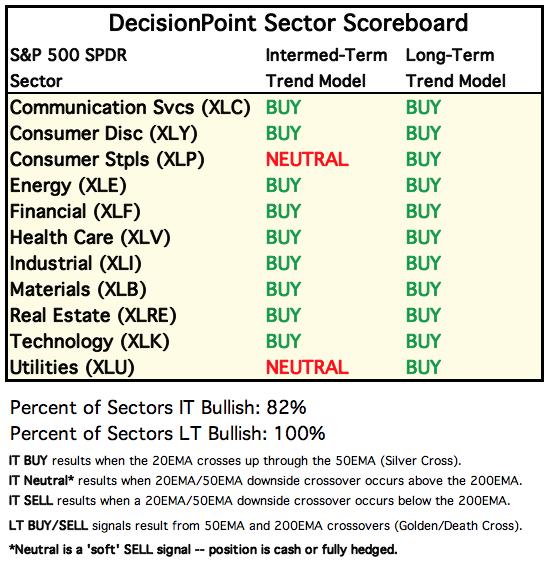 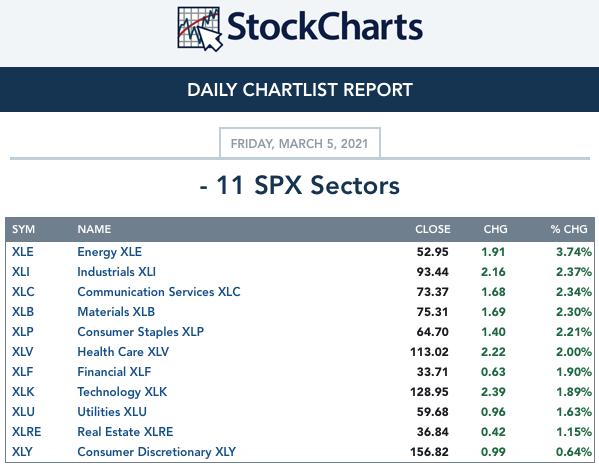 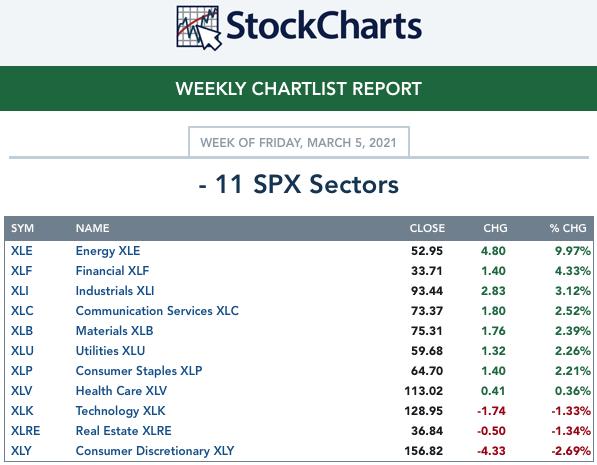 SPY Daily Chart: The market made a turnaround today after sinking quickly to its lows in the morning. On the 15-minute chart, a strong rally began off that low, executing a double-bottom pattern. The minimum upside target of the pattern would take price above the top from Tuesday. However, note that strong negative volume came in during the last 15 minutes of trading. 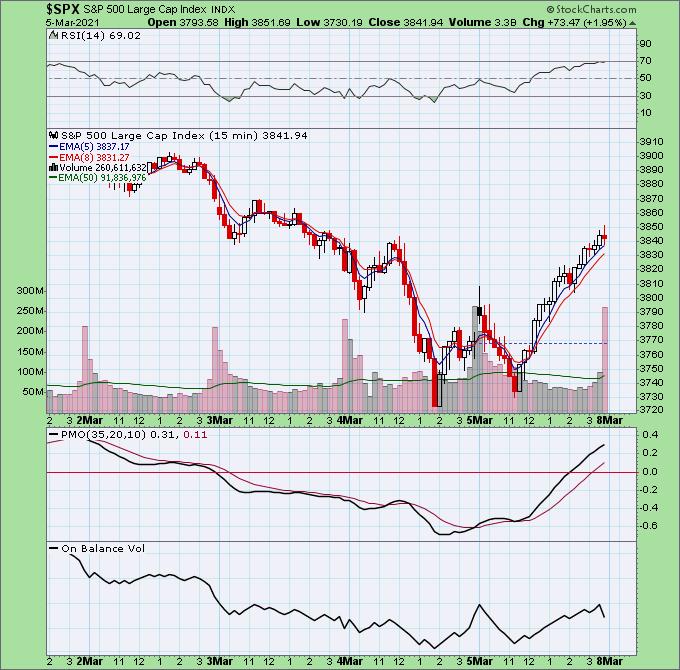 This rally prevented a close beneath the 50-EMA and comes off support near 370. The PMO is still in decline and price is still outside the previous rising trend. 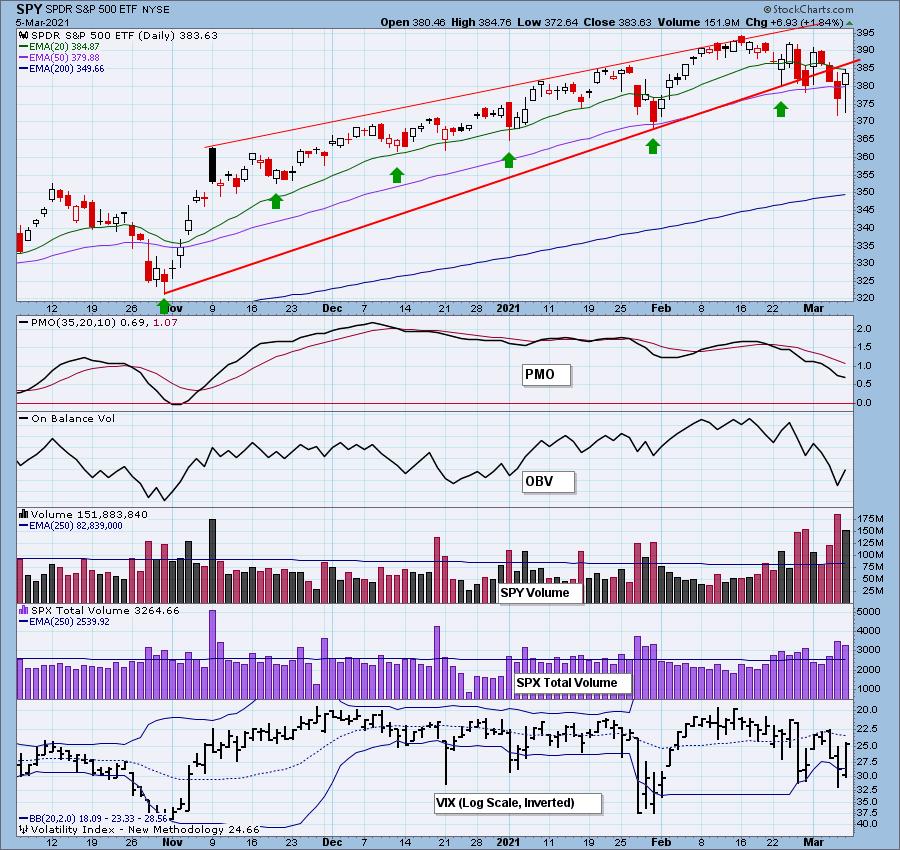 The RSI remains negative. We've annotated the 370 level mentioned as support above. 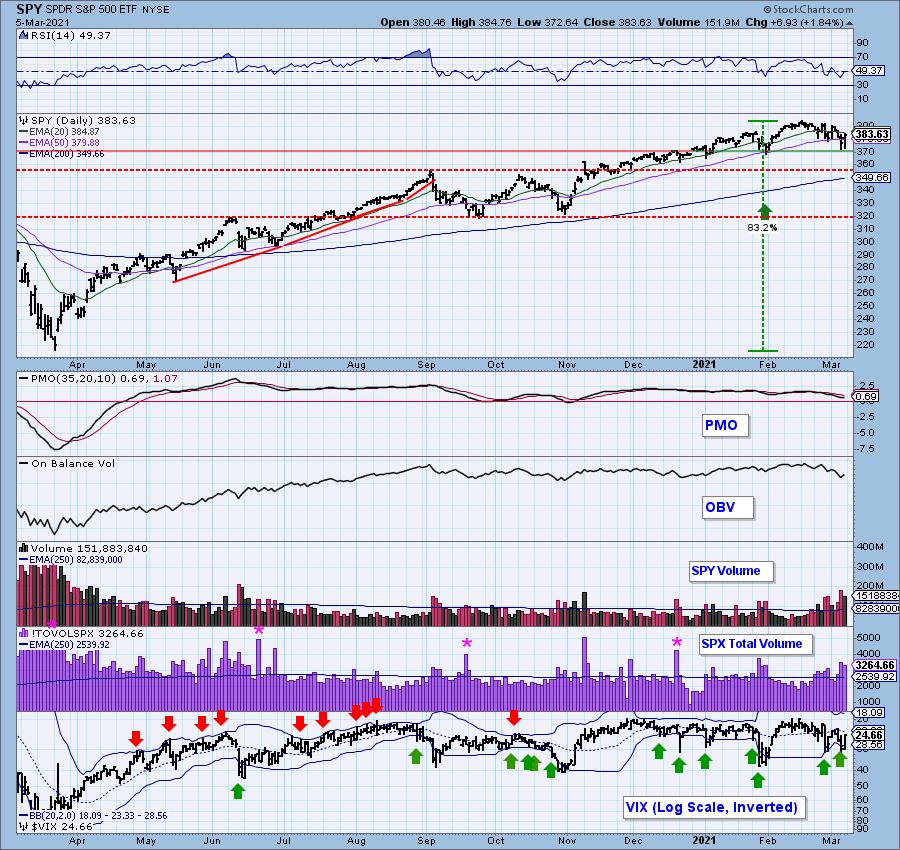 SPY Weekly Chart: Price continues to ride along the top of the bearish megaphone pattern on the SPY. The weekly RSI is more healthy than the daily RSI, staying in positive territory and not overbought. However, the weekly PMO is bearish as it prepares for a negative crossover its signal line. 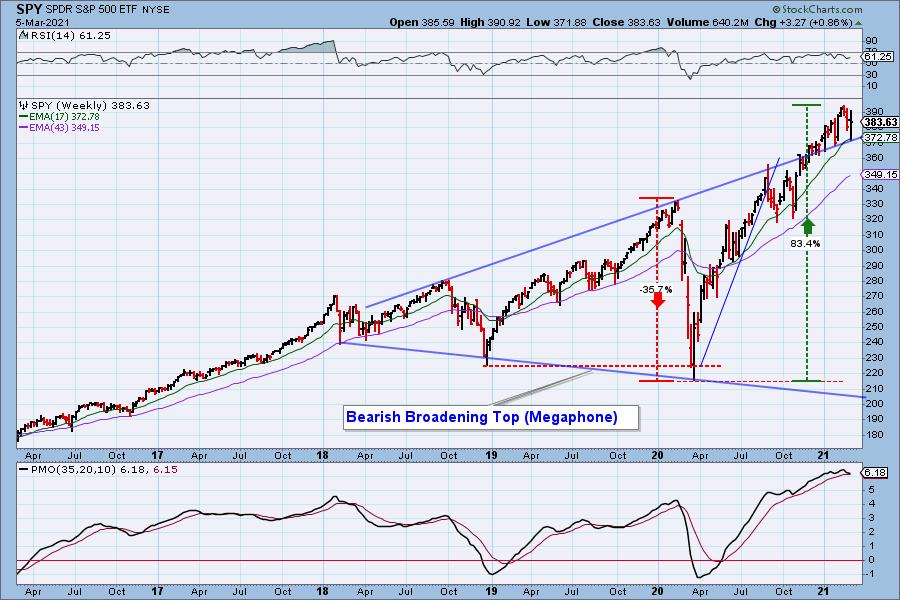 S&P 500 Monthly Chart: Despite the 2020 bear market, price is easily maintaining the secular bull market rising trend since the 2009 bear market low. However, the monthly PMO is decelerating and is in overbought territory. 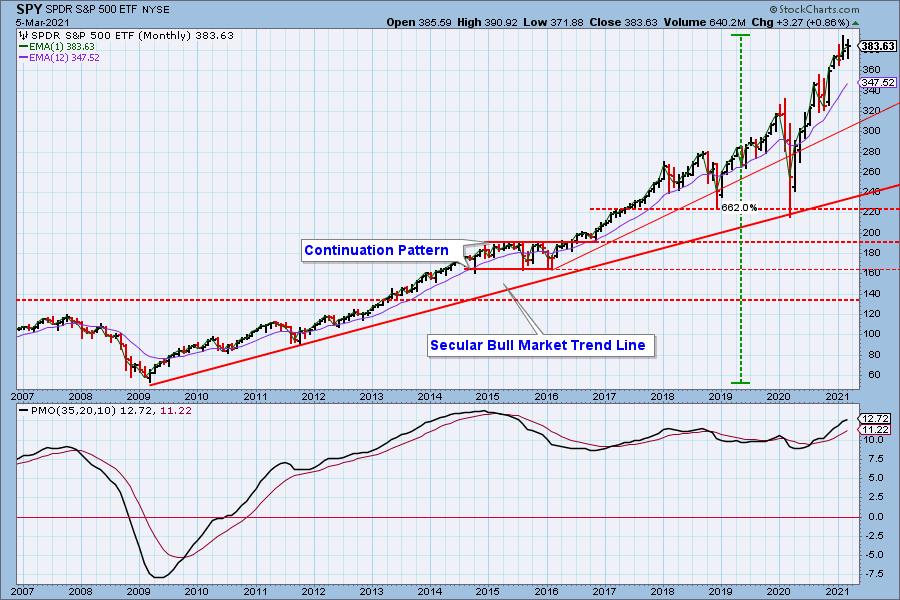 The GCI continued to deteriorate after topping this week in extremely overbought territory. The ice is cracking in the long term. The BPI ticked up today, but it hasn't reached oversold territory yet. The SCI is declining and is also not oversold. 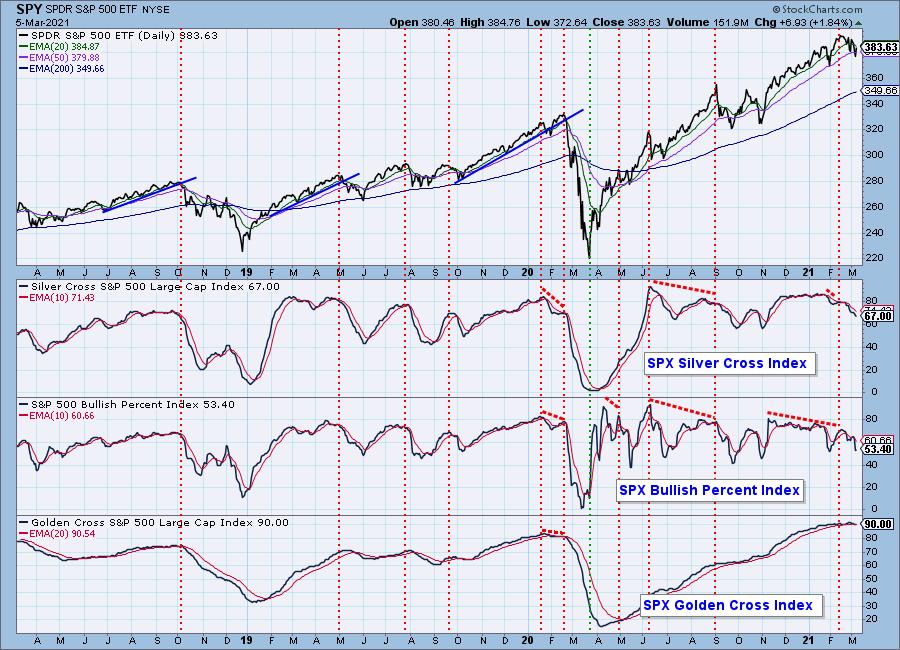 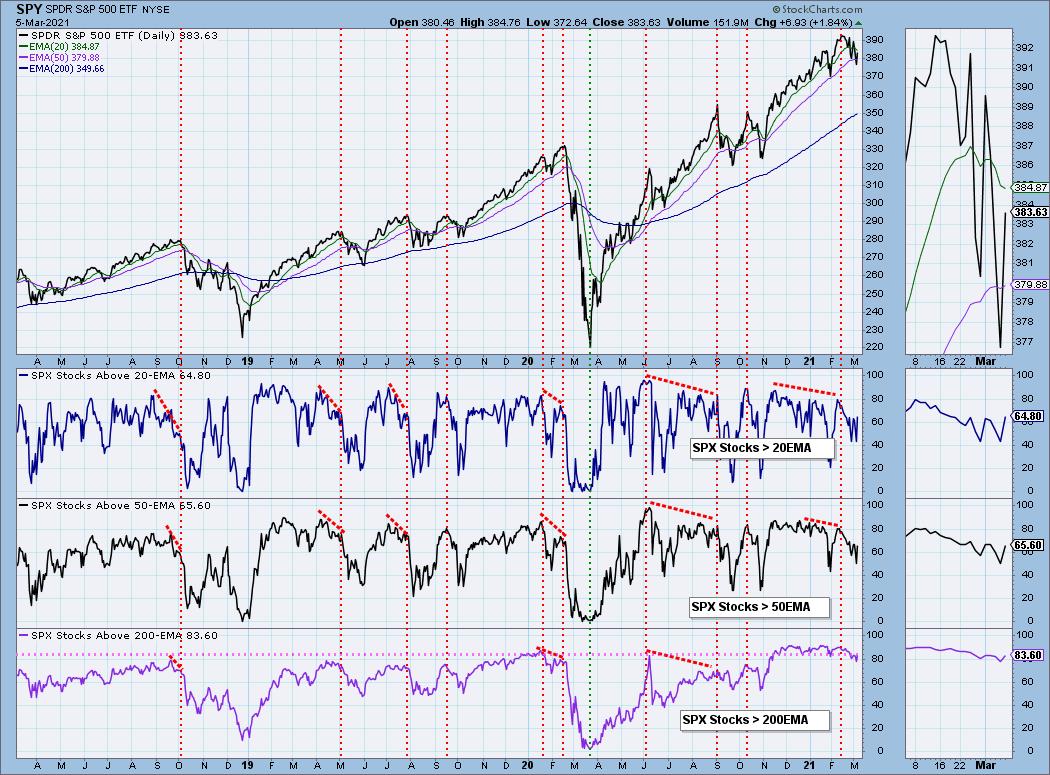 Climax Analysis: Today we got an upside climax. It wasn't really confirmed by New Highs, but we did see strong Total Volume on a rally day which could suggest a buying initiation after yesterday's selling exhaustion. The VIX rebounded and penetrated the lower Bollinger Band on the inverted scale. These usually lead to higher prices. 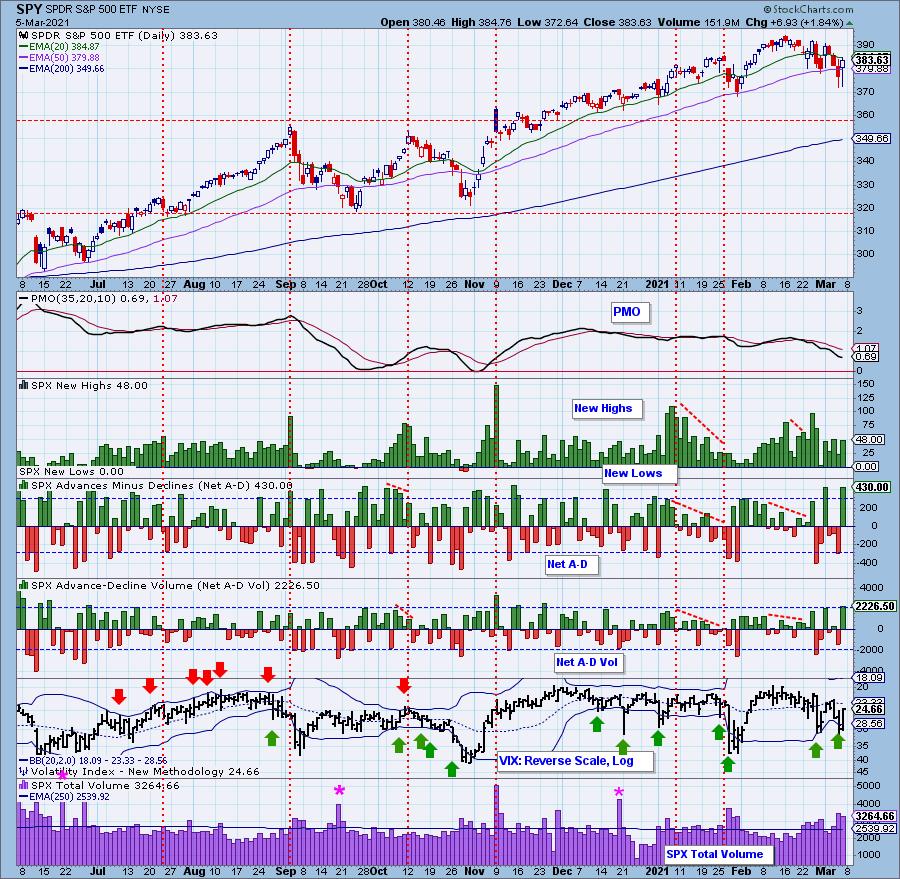 Short-Term Market Indicators: The short-term market trend is DOWN and the condition is NEUTRAL.

The STOs turned up today which could be confirming a buying initiation. Although both indicators are in neutral, not oversold territory. The %Stocks indicators have formed a short-term positive divergence with price bottoms. 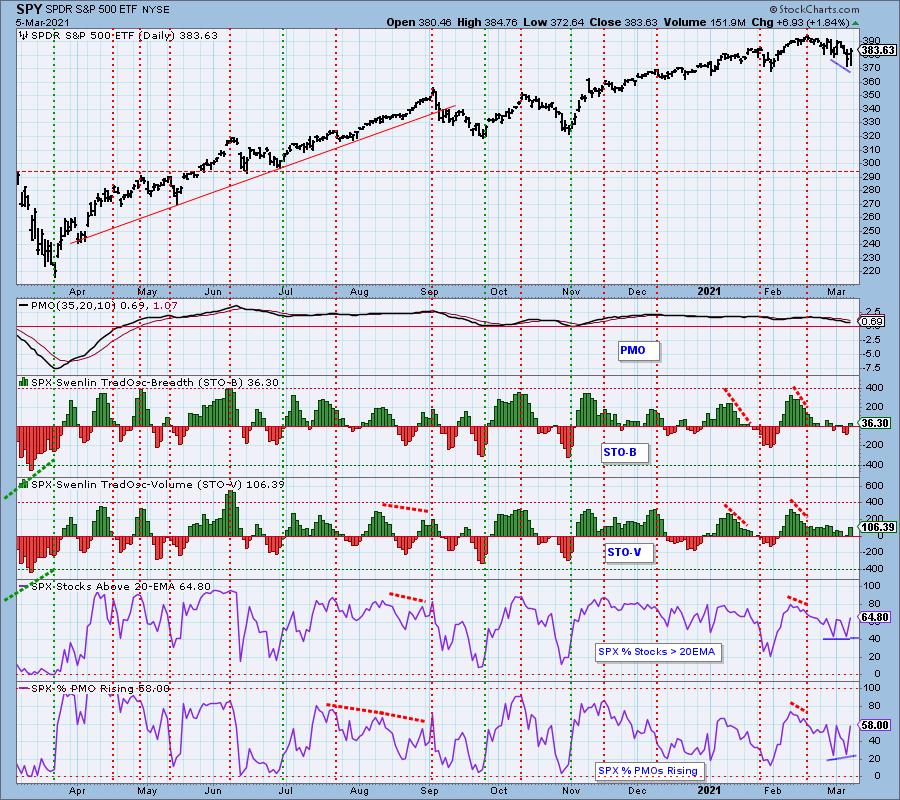 Intermediate-Term Market Indicators: The intermediate-term market trend is UP and the condition is OVERBOUGHT. The market bias is BULLISH.

Although these indicators move up slightly today, the declining trend is dominant. Less than half of the SPX have PMO BUY signals. Today's powerful rally did very little to improve that situation. 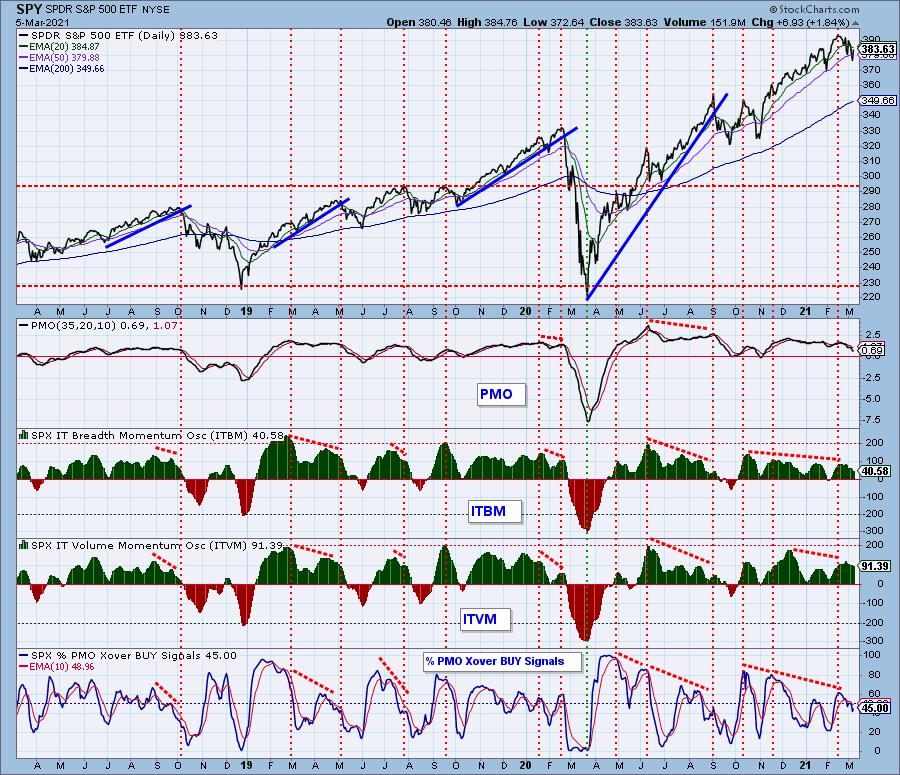 CONCLUSION: Short term, the are encouraging signs in the indicators as we saw the STOs begin to rise again and some possible positive divergences in short-term participation. The intermediate-term indicators are not favorable as the ITBM/ITVM are still in a declining trend and less than half of the SPX have PMO BUY signals. Speaking of declining trends, the declining trend in %Stocks above their 200-EMAs is becoming more clear. The SCI and GCI are also declining. We could be seeing a buying initiation in the short term, but with the intermediate and long terms looking weak, it might be best to sell into any short-term strength that appears next week.

Bitcoin appeared ready to rally back to new all-time highs this week with the breakout above the 20-EMA. However, the PMO was and is in decline. The failure of this week's rally tells us to look for a test of 42500. 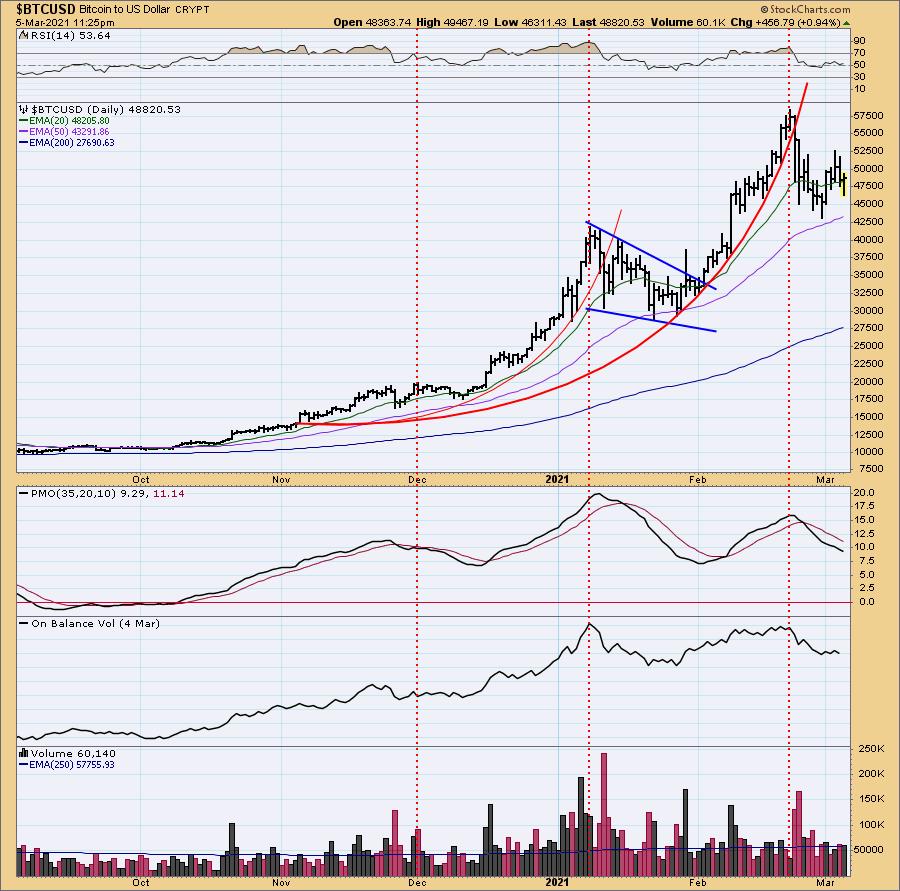 Longer-term interest rates have been rising since the August low, and they have recently become parabolic. While we don't expect to see a parabolic crash, some retracement is probable. 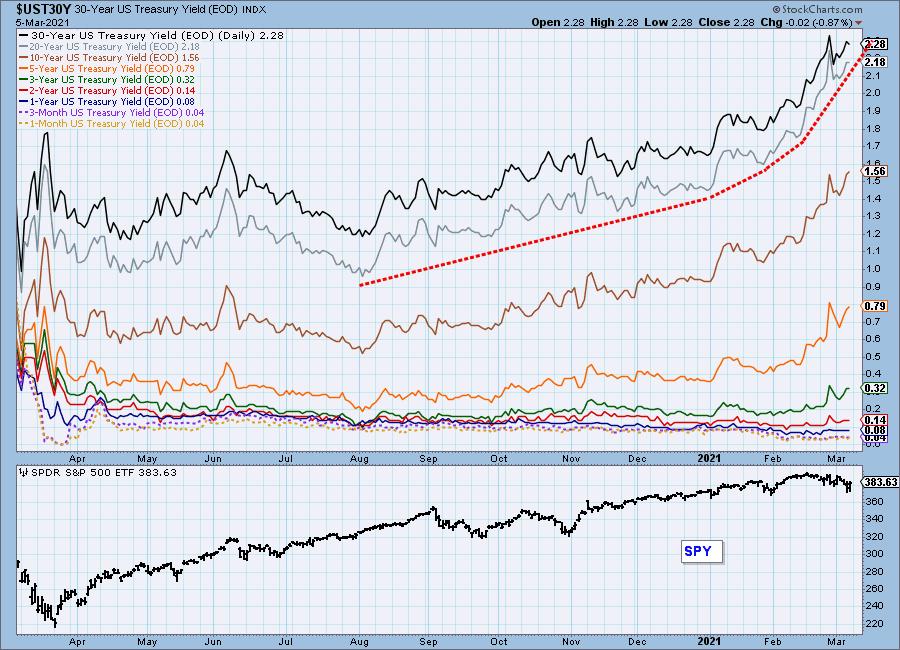 UUP Daily Chart: As noted in the opening, UUP triggered an IT Trend Model BUY signal on a "silver cross" of the 20/50-EMAs. The breakout above the confirmation line of the bullish double-bottom pattern is more clear on the 6-month UUP chart. 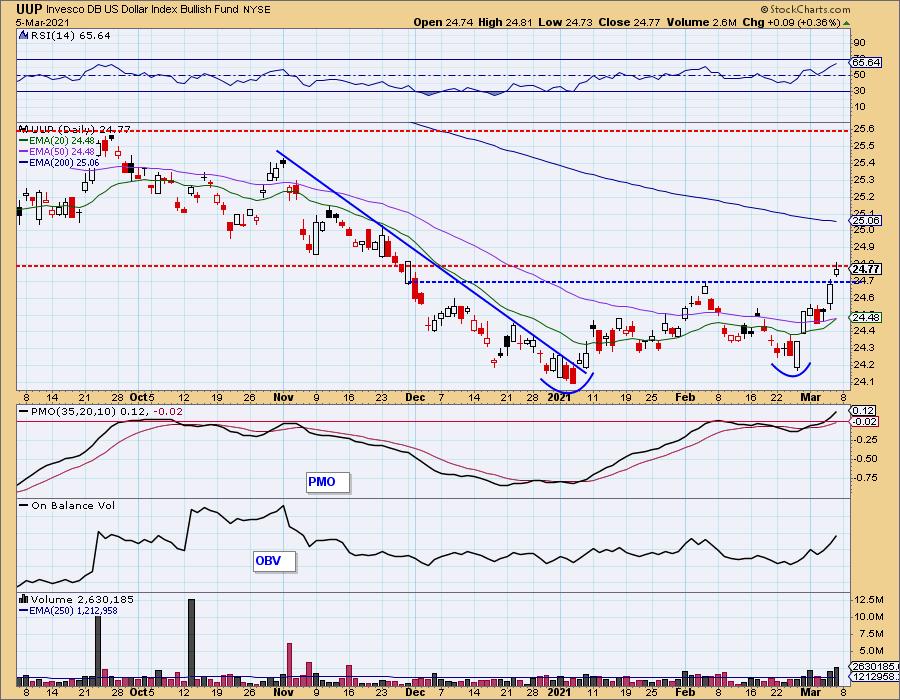 UUP Weekly Chart: The breakout from the bullish falling wedge pattern looks convincing on the weekly chart, especially when accompanied by a weekly PMO BUY signal. The biggest challenge is strong overhead resistance. 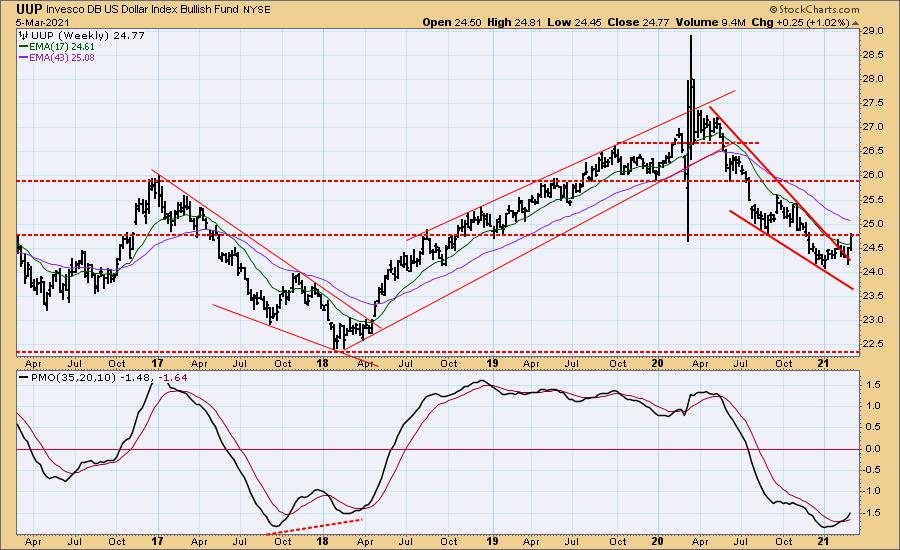 GOLD Daily Chart: This week gold's 50EMA crossed down through the 200EMA generating an LT Trend Model SELL signal. Gold continued the breakdown that began last week. The RSI and PMO are oversold, but based on discounts for PHYS, they aren't bearish enough. 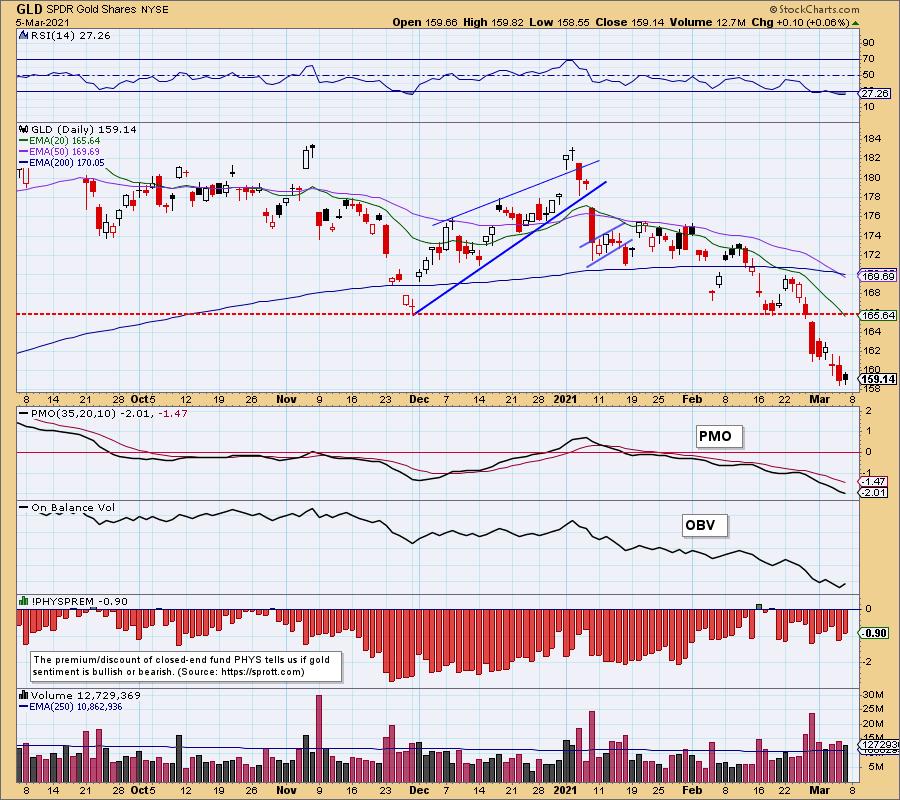 Gold is sitting on what should be strong support at the lows from the April/May consolidation zone last year. There is a high likelihood we will see this level hold, but like Gold Miners, price will likely hug the support line and move sideways. That could clear oversold conditions in preparation for another leg down. 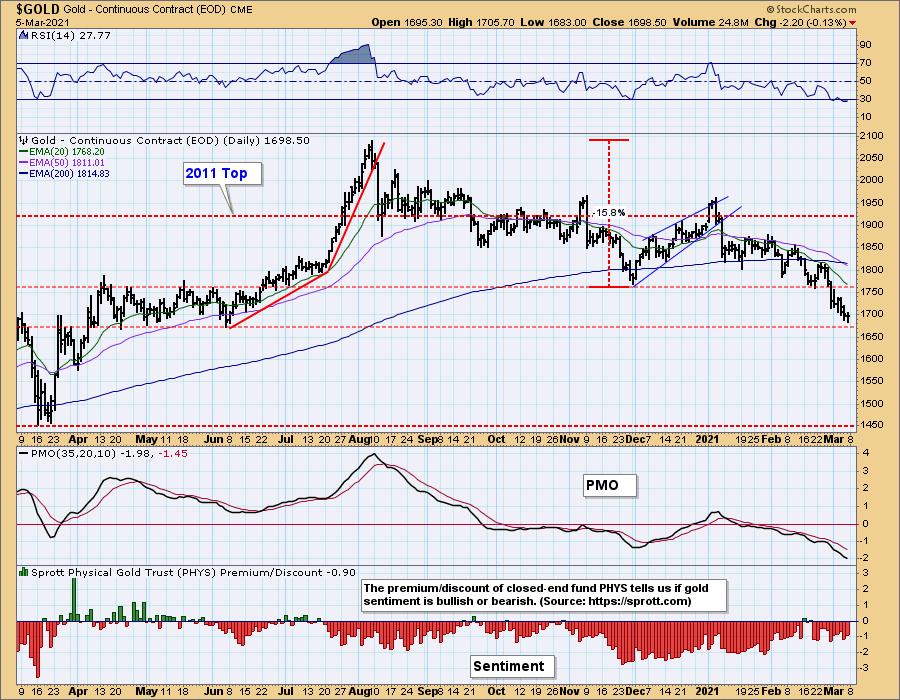 GOLD Weekly Chart: It is clear on the weekly chart how important this support level is. For bulls, it does appear there is a possible bull flag on the weekly chart, however if support is lost, the pattern would be scuttled. For bears, discounts are contracting meaning bearish sentiment is lowering. Sentiment begin contrarian, we need to see extremes in discounts before the condition is bullish for Gold. 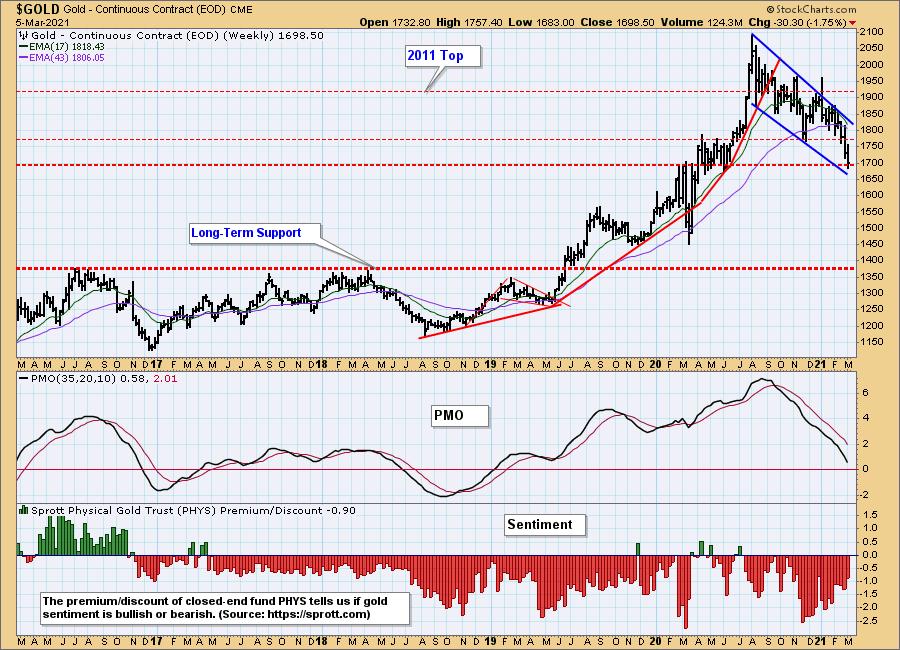 GOLD MINERS Golden and Silver Cross Indexes: We may be seeing some signs of life in the Gold Miners industry group as participation is bottoming again. The PMO has decelerated. Miners were actually up 2.09% this week, but as you can very little headway was gathered. Given the rising Dollar and a depression in Gold, it will be an uphill battle for Gold Miners. There are other areas of the market that are more attractive. 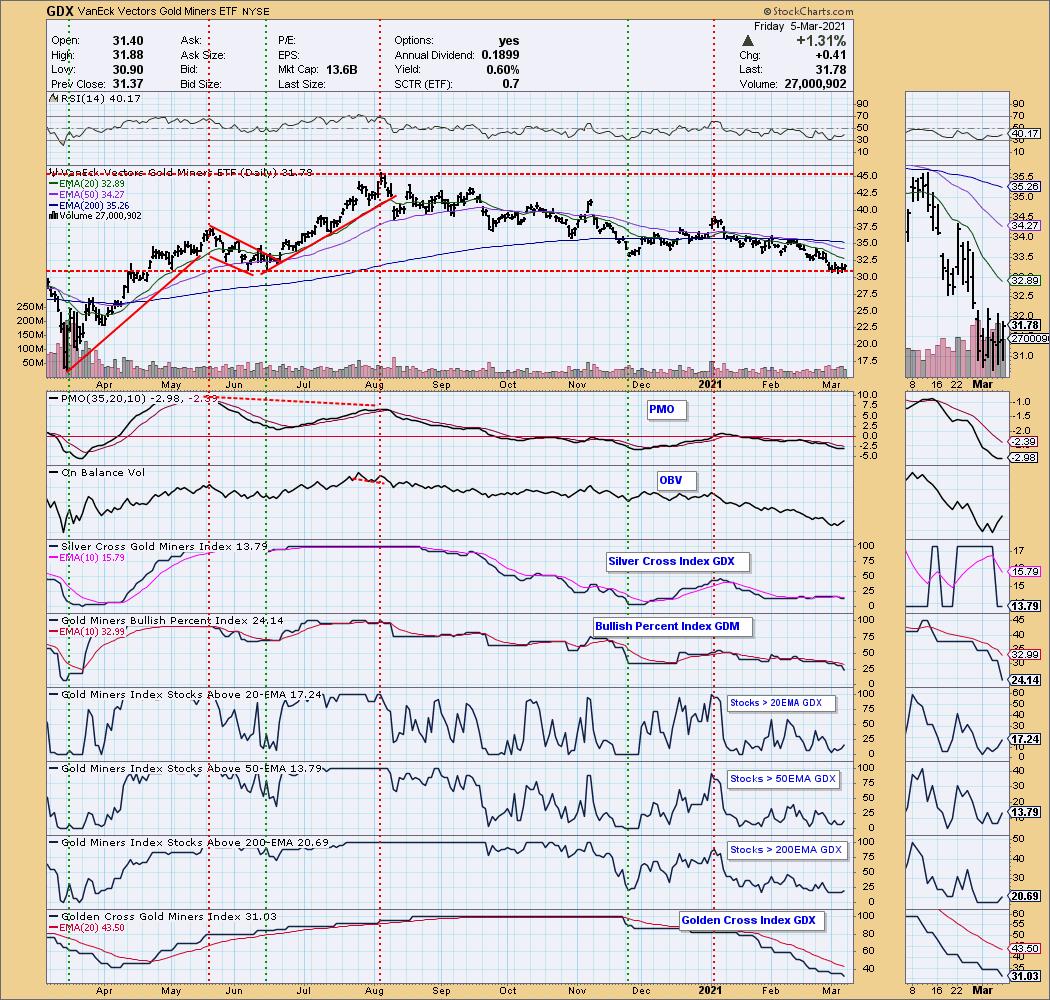 USO Daily Chart: USO bounced off the 20-EMA this week and began increasing its rising trend again. Both the RSI and PMO are overbought, but USO's RSI spent nearly a month in overbought territory with little damage. The PMO triggered a crossover BUY signal this week. 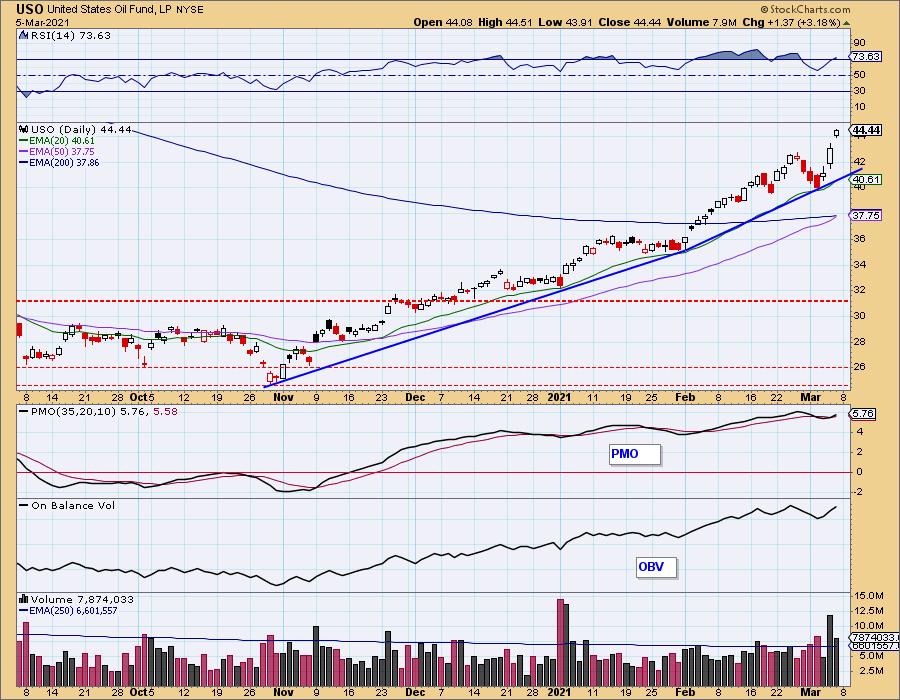 USO is nearing a "golden cross". 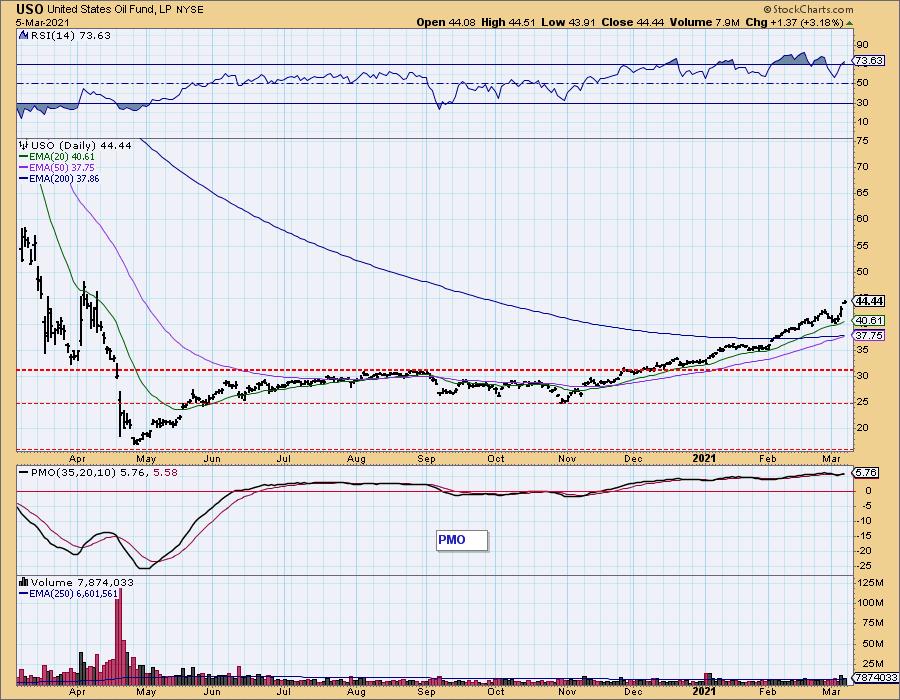 USO/$WTIC Weekly Chart: The weekly chart is very bullish. The only possible problem is WTIC approaching overhead resistance. However, given the continued pressure on the fossil fuels industry, we should expect even higher prices. 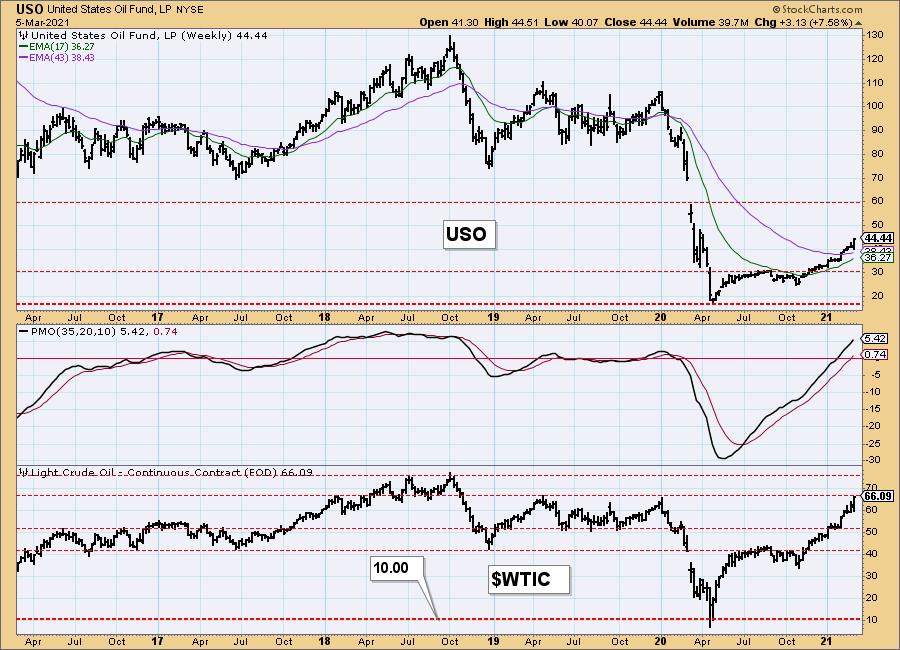 TLT Daily Chart: Rising yields continue to pull Bonds downward. The PMO and RSI are oversold and support is arriving. 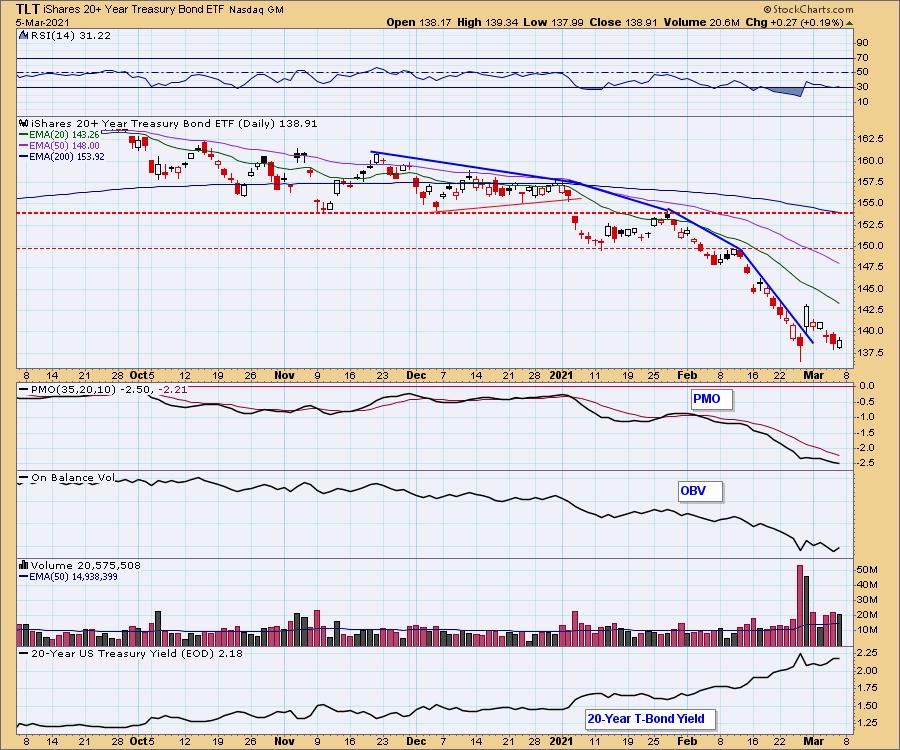 Support was found previously at the March intraday low and the PMO is flattening on the daily chart. 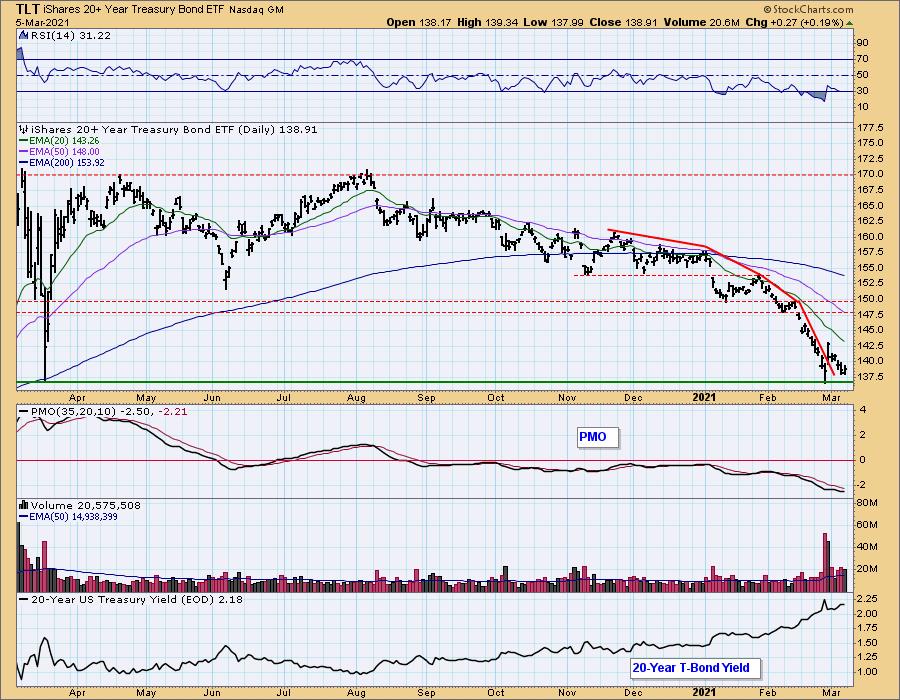 TLT Weekly Chart: The weekly chart tells us that while support does lie near the March low, we have a support 'zone' that suggests price could fall further, yet still be technically above support. With yields still holding a rising trend, we would expect to see price move into that zone rather than bounce here. 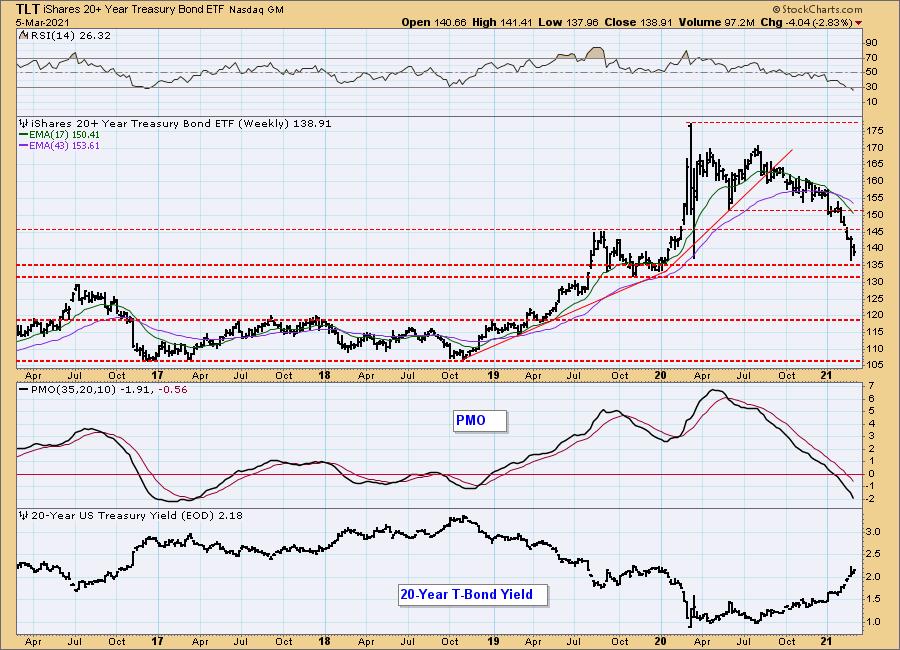