The failed breakout is concerning as is the RSI has turned down before reaching positive territory. The PMO has flattened and not quite bottomed. It looked as if the Technology-rich NDX was waking up, but no dice. Notice it is far from all-time highs which the SPX already logged yesterday and it has dropped below its 20/50-EMAs. Another reason to consider more defensive sectors vs aggressive sectors like Technology. 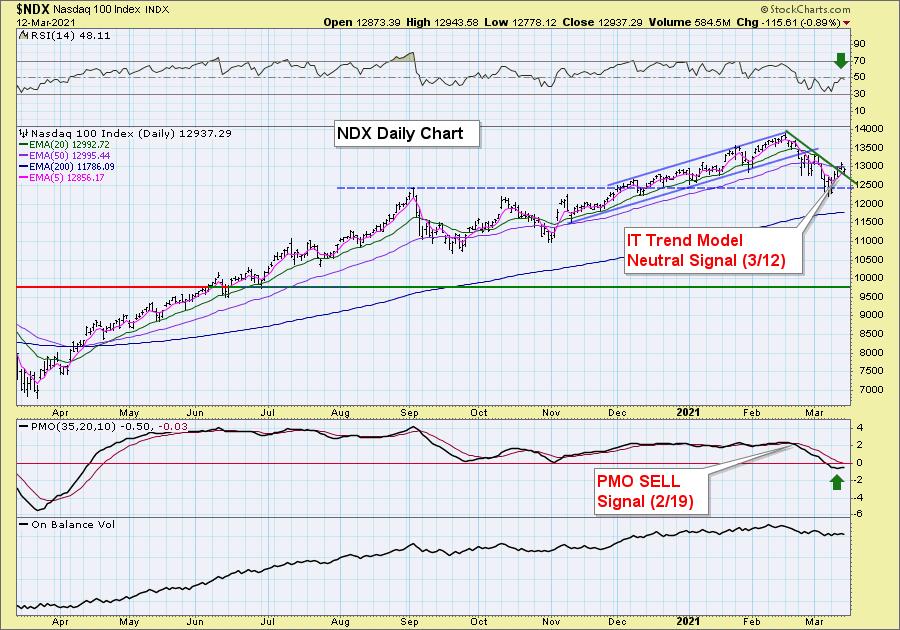 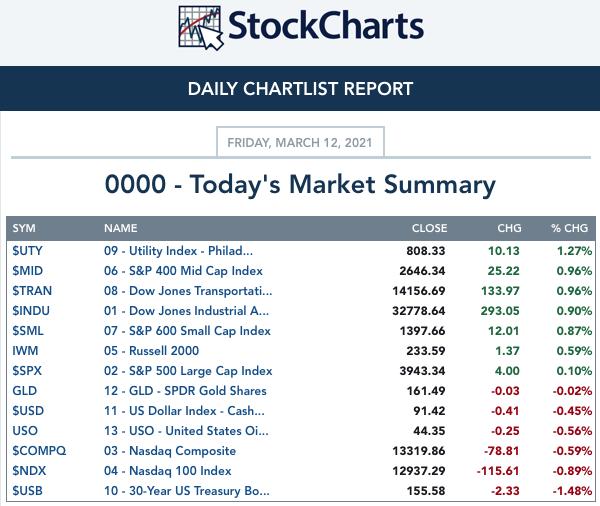 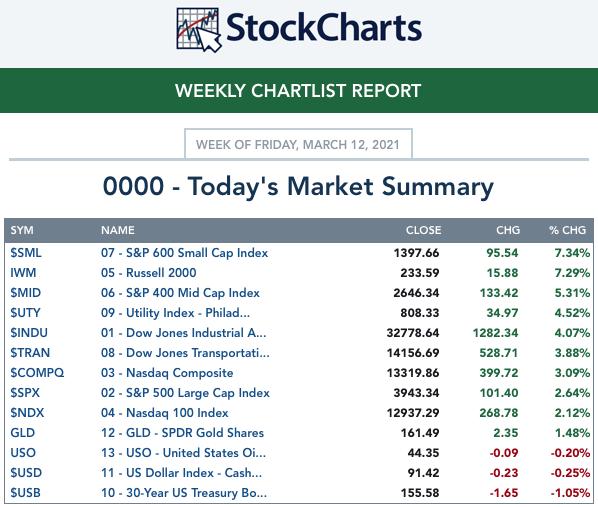 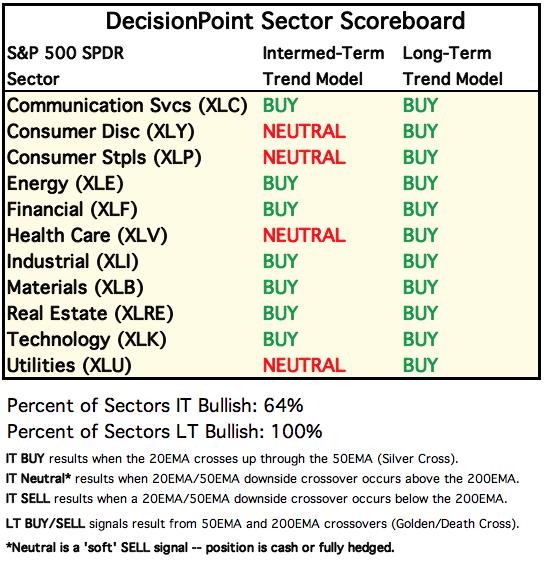 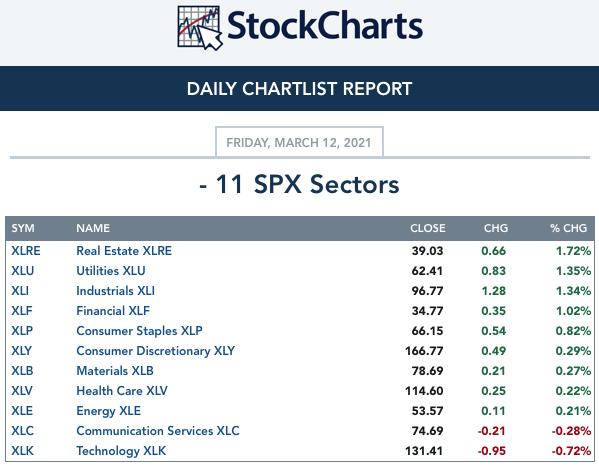 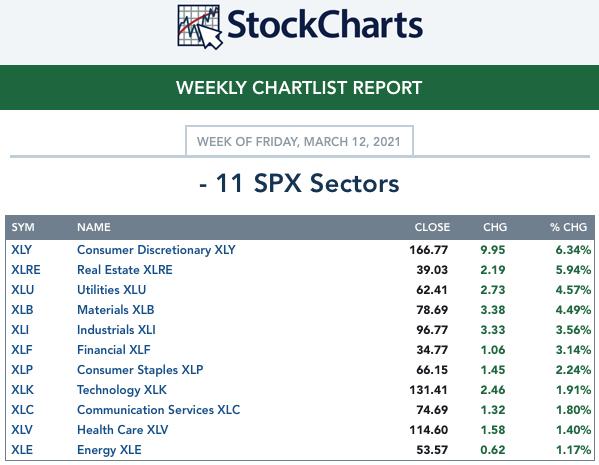 SPY Daily Chart: The market managed to eke out a positive close today. The PMO is nearing a BUY signal. We made new all-time highs yesterday, but notice the negative divergence on the OBV. Granted the OBV hasn't logged a top, but we know that when all-time highs were hit, the OBV was not confirming it. We've annotated a symmetrical triangle. That is a continuation pattern which suggests and upside breakout, which we got. At this point price is working hard to overcome resistance at all-time highs. 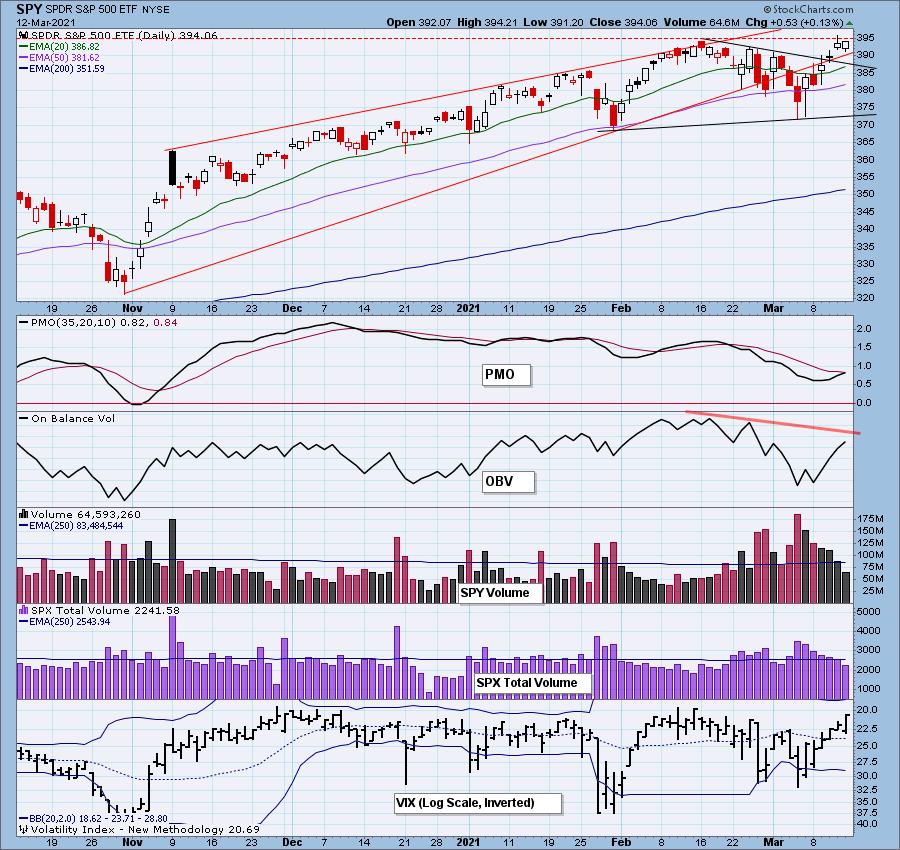 Total volume continues to slide even as price moves higher, but given the new PMO BUY signal and positive (not overbought) RSI, the expectation is a move to new all-time highs. An increase in volume would have prevented the negative divergence on the OBV when price hit new all-time highs. 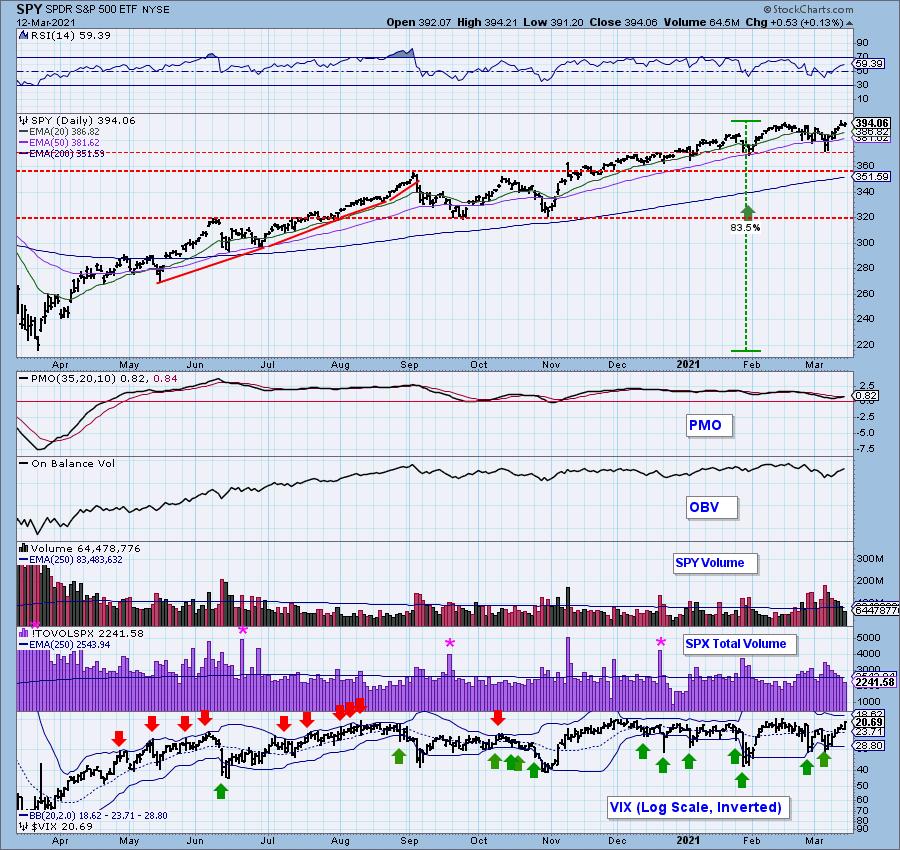 SPY Weekly Chart: The market continues to rise and seems content with using the top of the megaphone to delineate the current rising trend. The weekly PMO was set for a negative crossover its signal line, but it is now moving sideways, preventing the SELL signal; although the margin is very thin between it and its signal line. This could easily turn into an IT PMO SELL signal next week. The weekly RSI remains ensconced in positive territory above net neutral (50) and not overbought which suggests price strength. 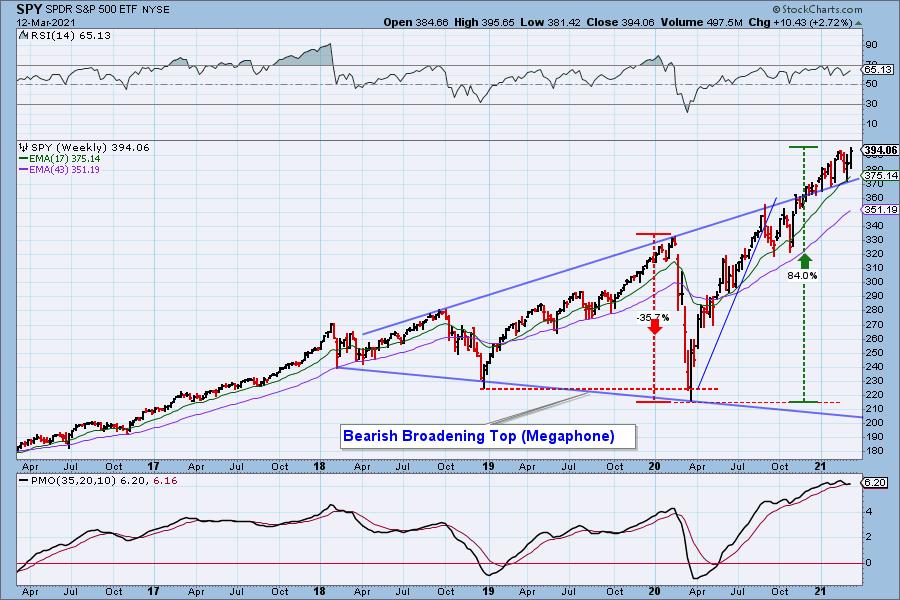 Negative divergences are currently in play as the market set a new high, but indicators were far from doing the same. Technically the SCI and BPI have not topped, so if they manage to rise above their previous tops, that would negate those bearish divergences. The GCI remains a problem. Not only is it overbought but it had a negative crossover last Friday. The GCI did halt its decline but hasn't risen since its negative crossover. 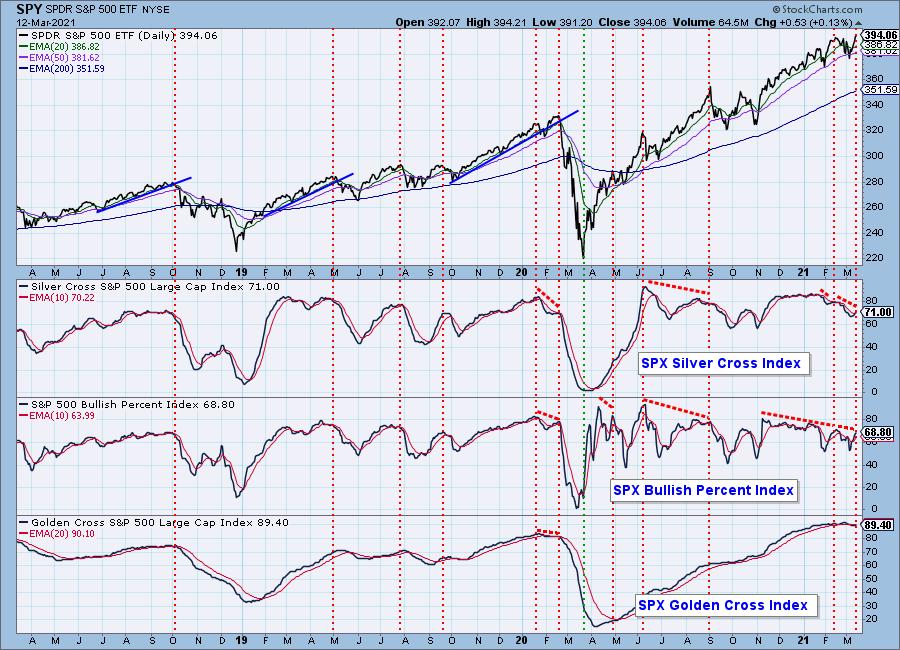 In the short-term, participation doesn't have a negative divergence. %Stocks > 20-EMA pushed past the previous top. However, the negative divergences are still at issue in the intermediate and long terms until we see higher highs. 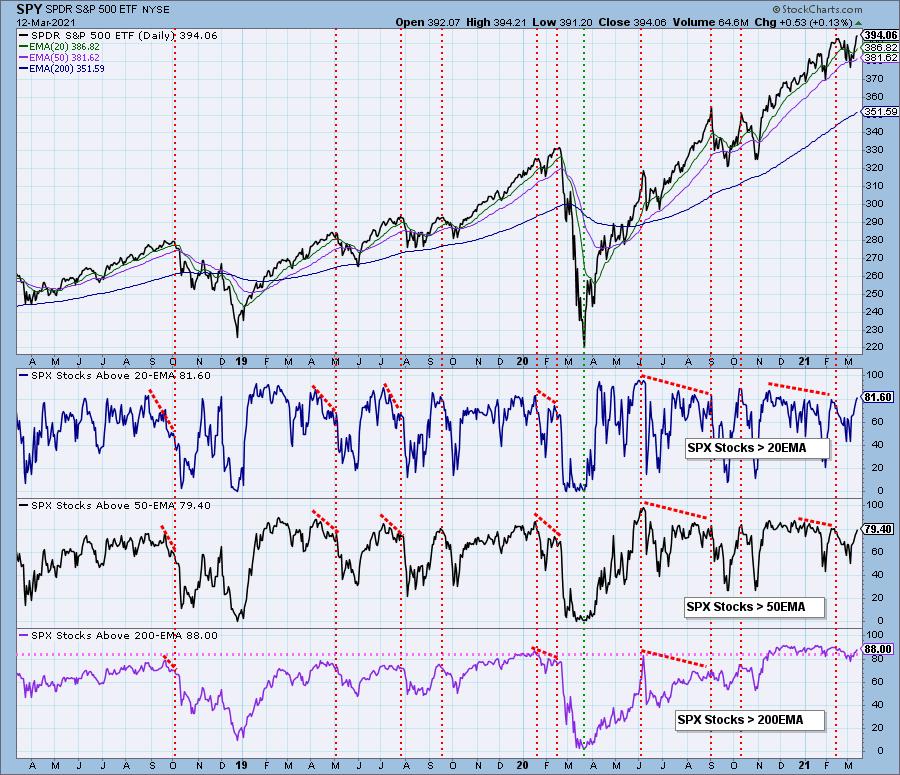 Climax Analysis: No climaxes this week. New Highs have been increasing since they dropped on Tuesday which does confirm the short-term rising trend. The VIX made it above its EMA on the inverted scale this week as investors breathed a sigh of relief on this week's rally. However, we can now see the upper Bollinger Band is nearing. Typically punctures of the upper Band signal lower prices ahead. For now it is rising and in positive territory which is confirming the rally in the very short term. 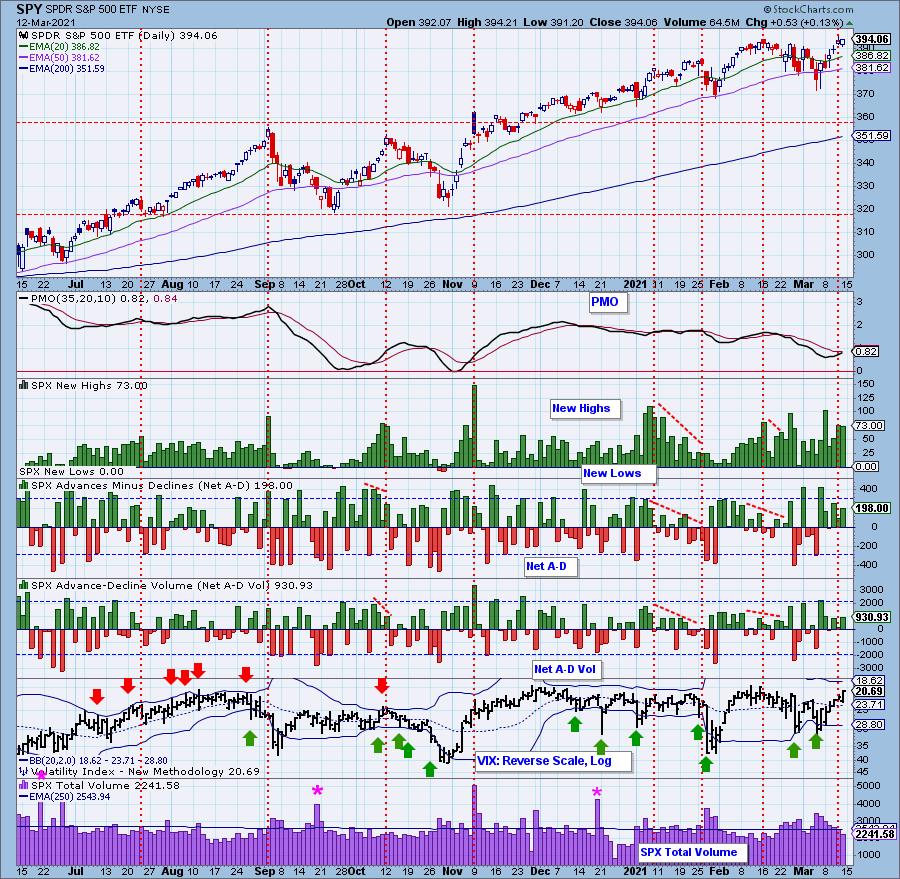 Short-Term Market Indicators: The short-term market trend is UP and the condition is VERY OVERBOUGHT. 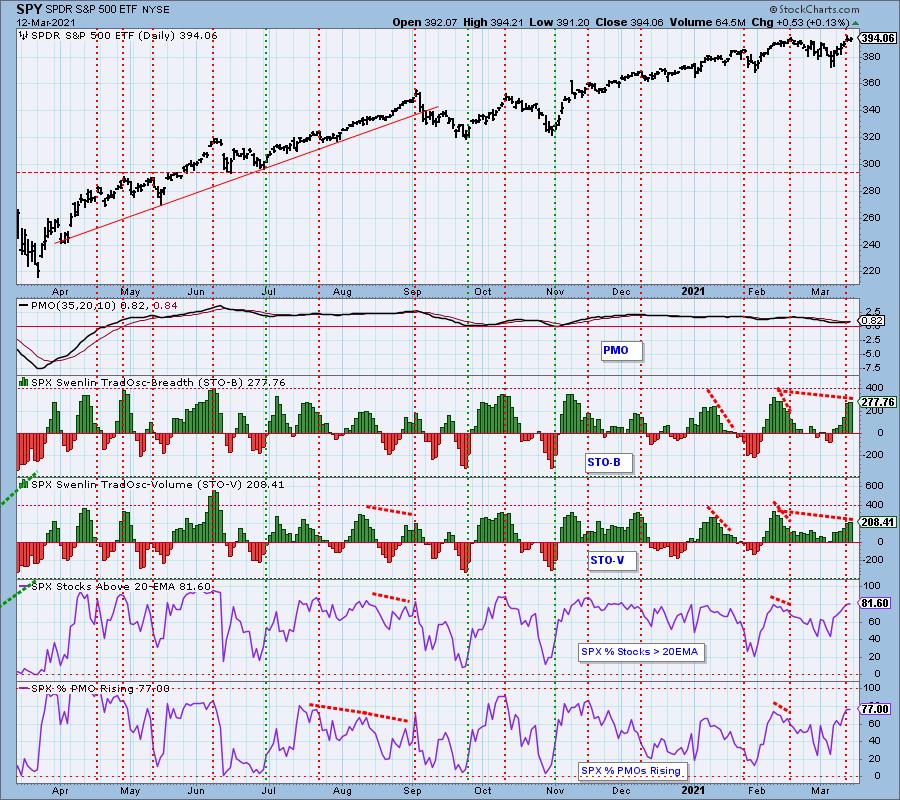 Intermediate-Term Market Indicators: The intermediate-term market trend is UP and the condition is OVERBOUGHT. The market bias is BULLISH.

Intermediate term negative divergences are currently in play. We are starting to see a healthy reading on %PMO Crossover BUY Signals which could support new all-time highs. 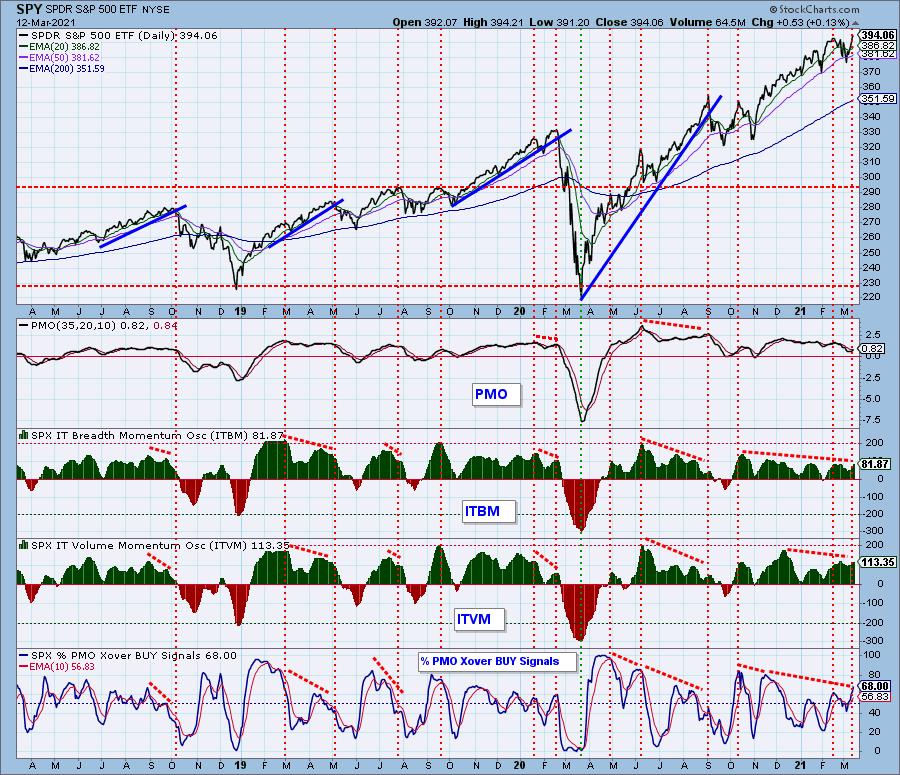 CONCLUSION: Indicators are giving us mixed messages, but overall they are rising which confirms the rally short term. However, there are negative divergences that should temper our bullish outlook in all timeframes. The STOs are still rising, but they are getting very overbought and sport negative divergences. Sector rotation is moving toward defensive sectors like Real Estate (XLRE) and Utilities (XLU). The bright spot is Consumer Discretionary (XLY) which finished the week at the top of the leader board, mainly supported by the "recovery" stocks. Typically when rallies are supported by the defensive areas of the market, it precedes a downside reversal. One large decline and most of the negative divergences on the indicator charts will be "finalized" with second tops lower than those reached at previous all-time highs. We are cautiously bullish going into next week, but it probably not a good time to increase your exposure unless you focus on strong industry groups mostly within the defensive sectors.

Note: End-of-quarter options expiration (quadruple witching) is next week. As usual, we remind you to expect low volatility toward the end of the week and very high volume on Friday.

Bitcoin is testing its all-time highs. The PMO triggered a crossover BUY signal. While the RSI did turn down, that's a good thing given it was reaching overbought territory. With the new PMO BUY signal, we would expect to see new all-time highs shortly.

Longer-term interest rates have been rising since the August low. After a brief pause, to set a less accelerated rising trend line, new one-year highs were made this week. 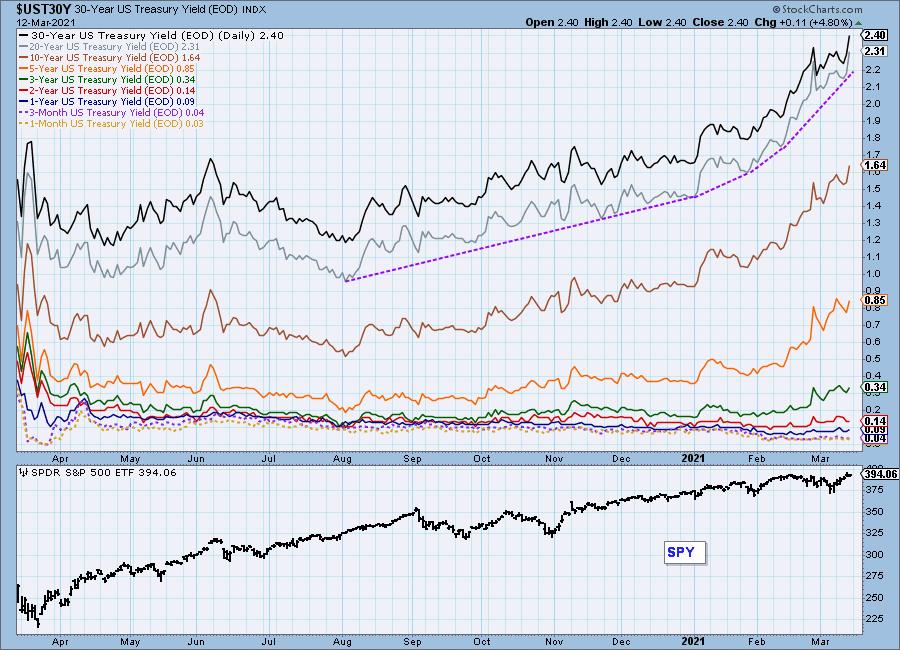 We think that mortgage interest rates are becoming important as they appear to have hit bottom, and we will include a chart of the 30-Year Fixed Mortgage Interest Rate from time to time. People buy homes based upon the maximum monthly payment they can/will pay. As rates rates rise, a fixed monthly payment will carry a smaller mortgage amount. (See table.)

As mortgages are forced to shrink, real estate prices will have to fall, and many sellers will increasingly find that they are upside down with their mortgage. This is a long-term issue and may not have an immediate influence on real estate prices overall. 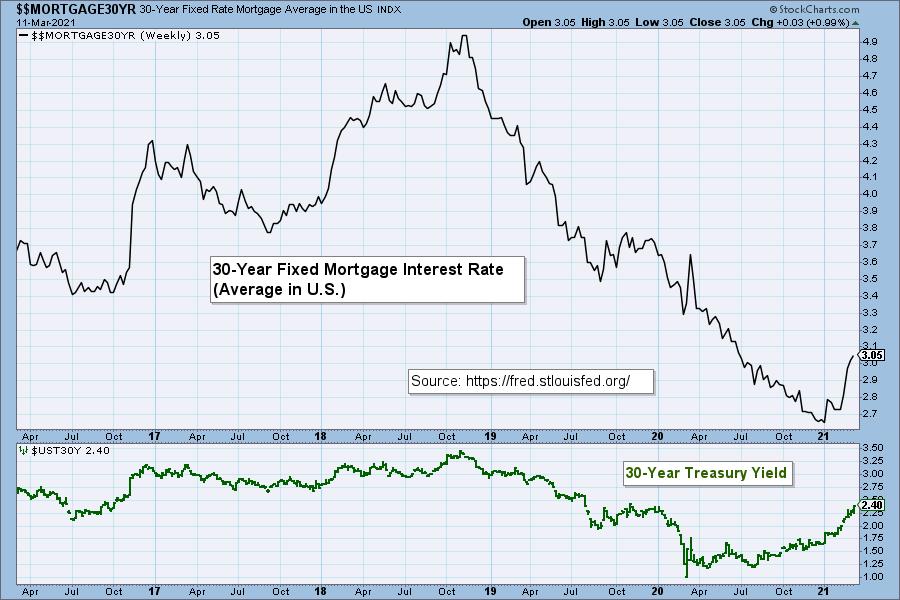 UUP Daily Chart: The double-bottom is still visible and price did manage to rebound on the confirmation line. The PMO flattened on the pullback this week, but never turned down which is bullish. The PMO appears overbought, but it's not. It just reached positive territory. 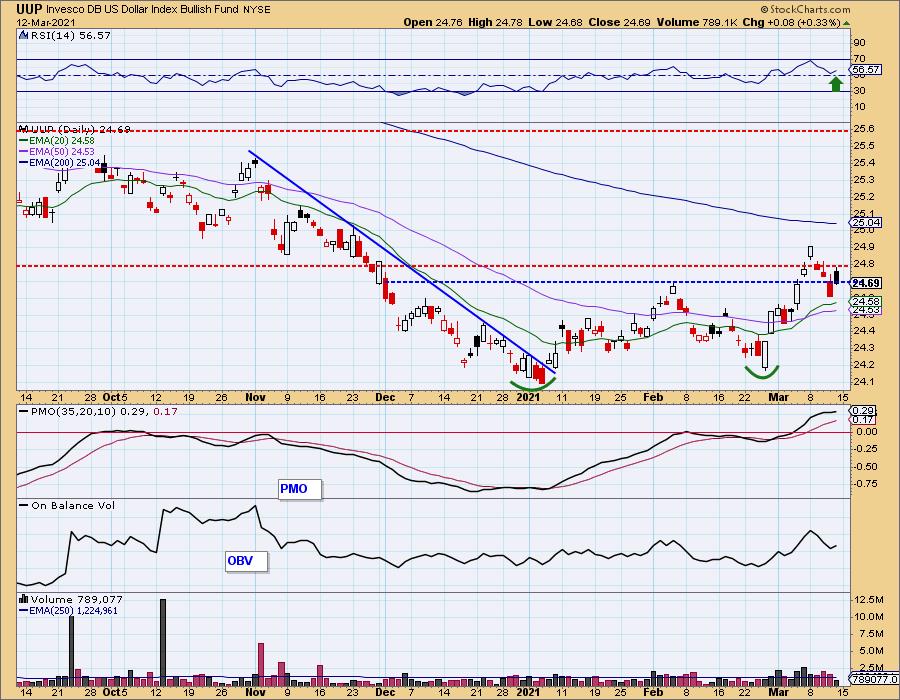 Given the passage of the stimulus bill, the Dollar will likely have difficulty putting together a strong rally. Overhead resistance at the 200-EMA is nearing and we can see the failure of price to stay above the August/September low. 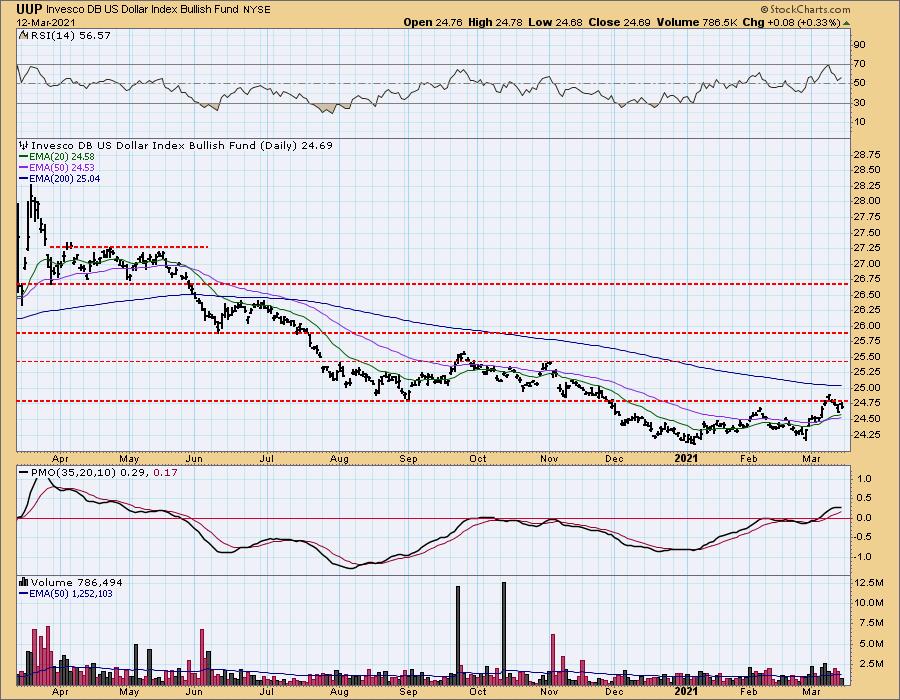 UUP Weekly Chart: The weekly chart is bullish, except for the struggle against overhead resistance. The weekly PMO is rising strongly out of oversold territory and price just broke out of a bullish falling wedge. Once overhead resistance is overcome, we would expect to see the Dollar work its way toward the next area of resistance at the 43-week EMA. 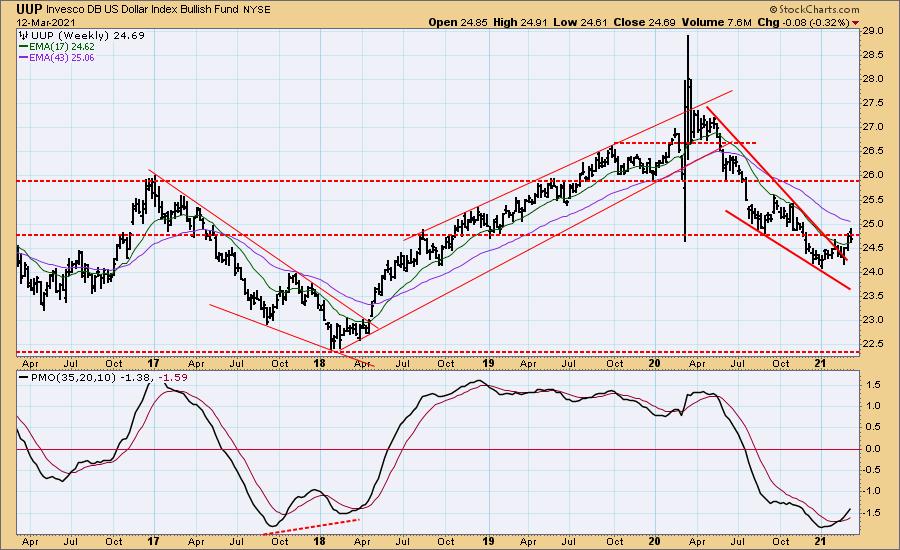 GOLD Daily Chart: Gold did close higher this week, but took back most of its gains today. Price is now working on closing the gap created on Tuesday. The PMO is rising slightly, but the RSI is negative. We saw a surge in discounts on PHYS which tells us that investors are very bearish on Gold. Given sentiment is contrarian, this is a possible reversal point. 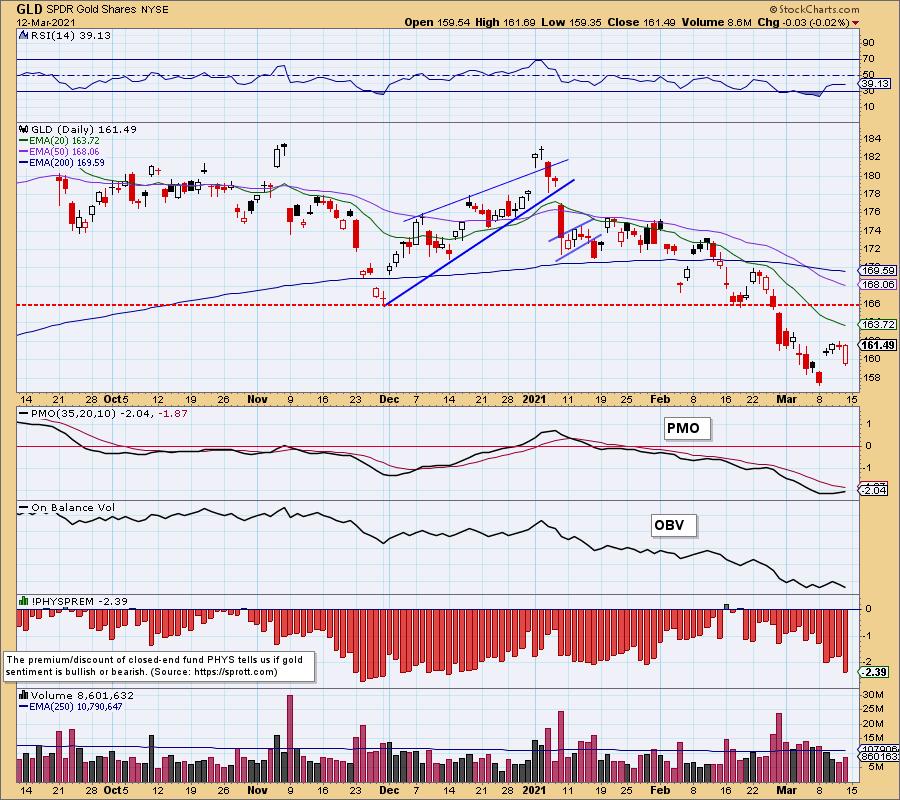 It is bearish to see Gold unable to reach overhead resistance before turning lower. 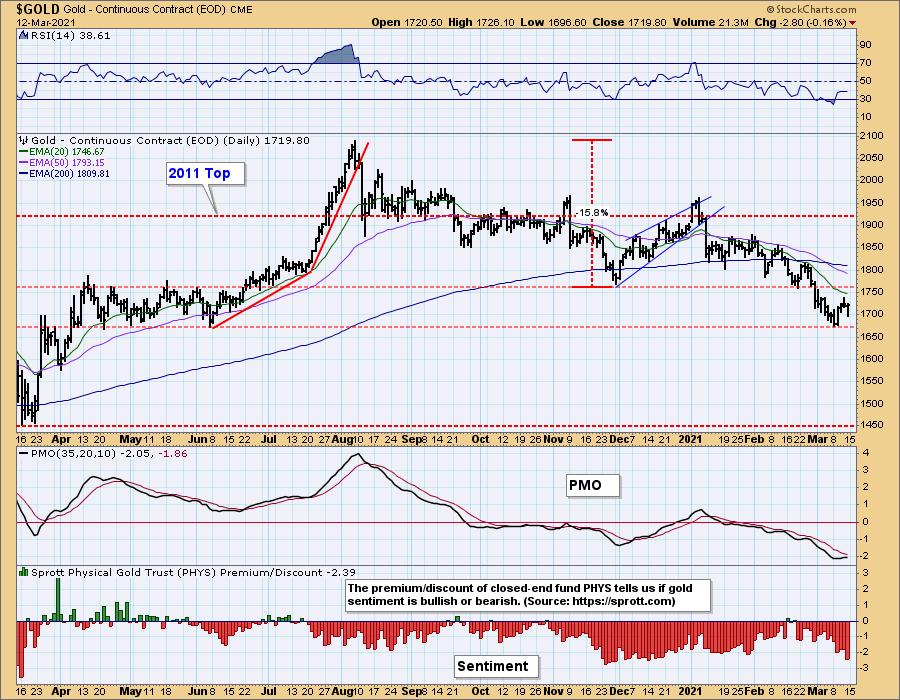 GOLD Weekly Chart: There is a big bullish falling wedge on the weekly chart and the surge in discounts this week does suggest a bottom is nearing. One of the big problems for Gold is a bullish Dollar. However, as mentioned before, the stimulus will likely pressure the Dollar and could open the door for a rally in Gold. 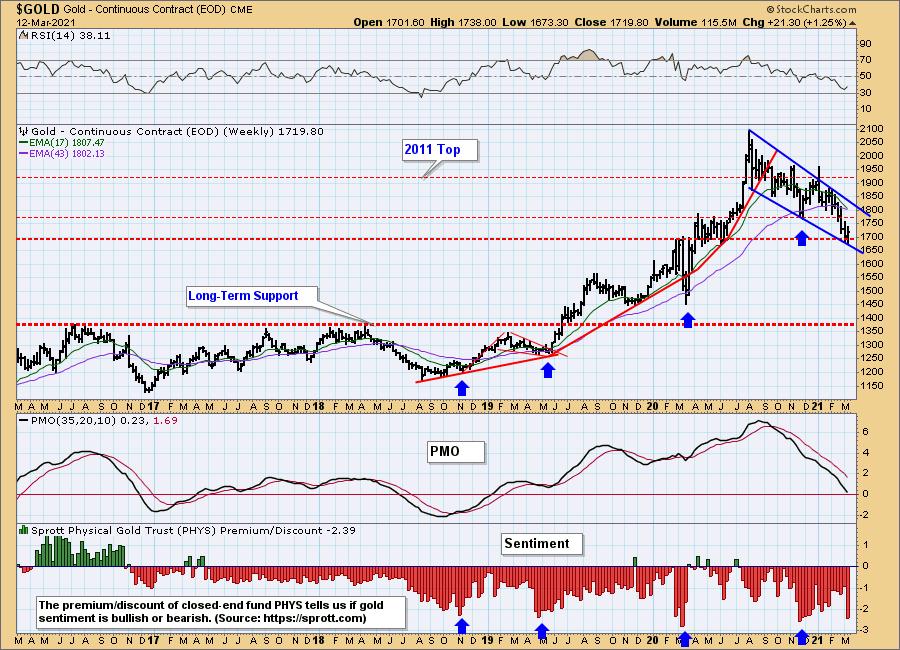 GOLD MINERS Golden and Silver Cross Indexes: The internals on Gold Miners are improving greatly. Other rallies have failed at the 20/50-EMAs, but this time the RSI has actually moved into positive territory. A new PMO BUY signal in oversold territory does suggest Miners are ready to breakout. For now, price remains in a declining trend channel. This industry group could get very interesting next week. 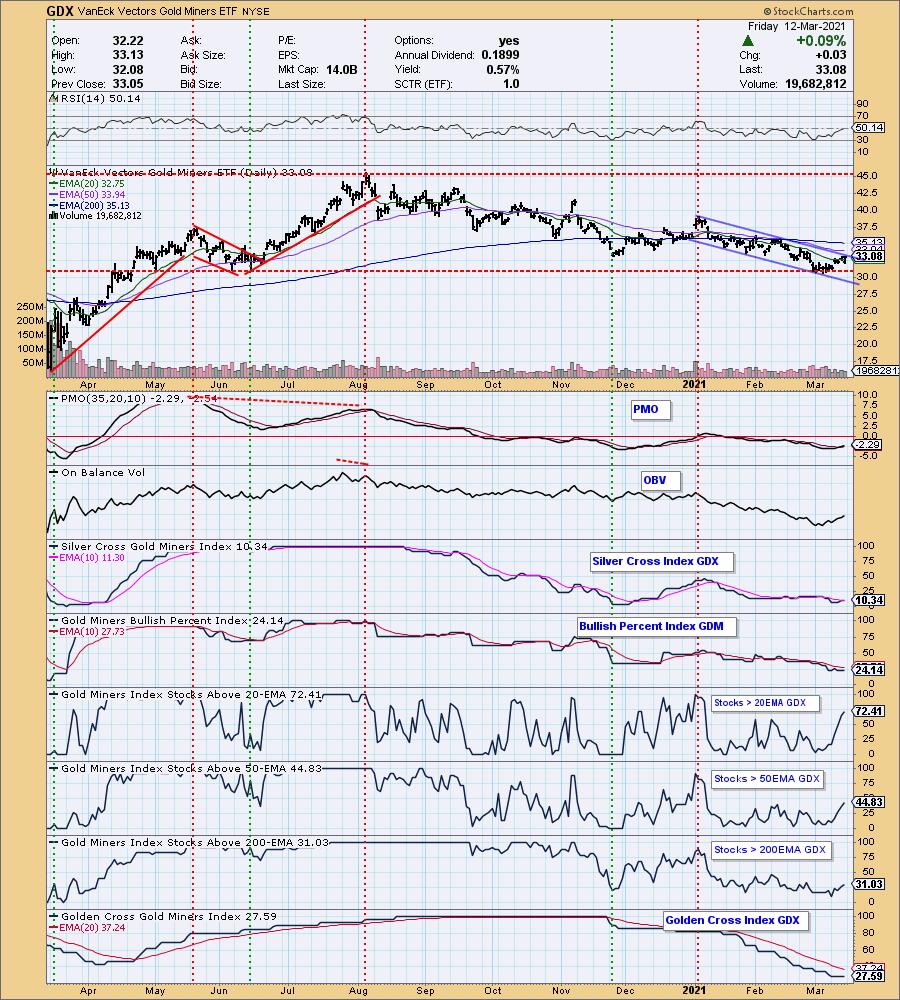 USO Daily Chart: USO continues to increase the acceleration of its rally, yet the RSI has managed to stay out of overbought territory. The PMO is very overbought, but notice how it has flattened even as the rising trend steepens. This tells us that acceleration is steady. 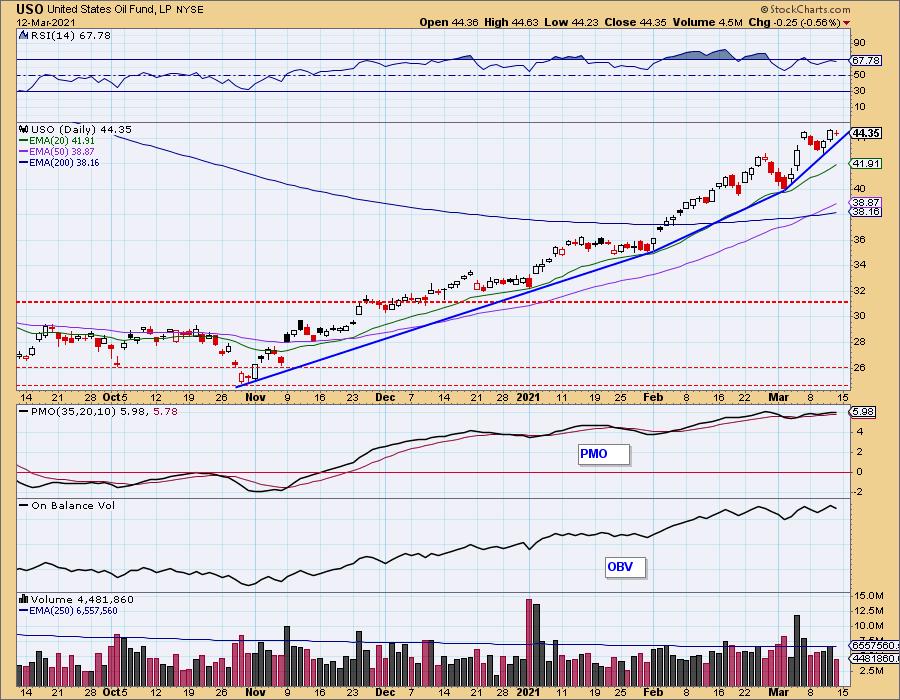 A new LT Trend Model BUY signal occurred on the "golden cross" of the 50/200-EMAs. 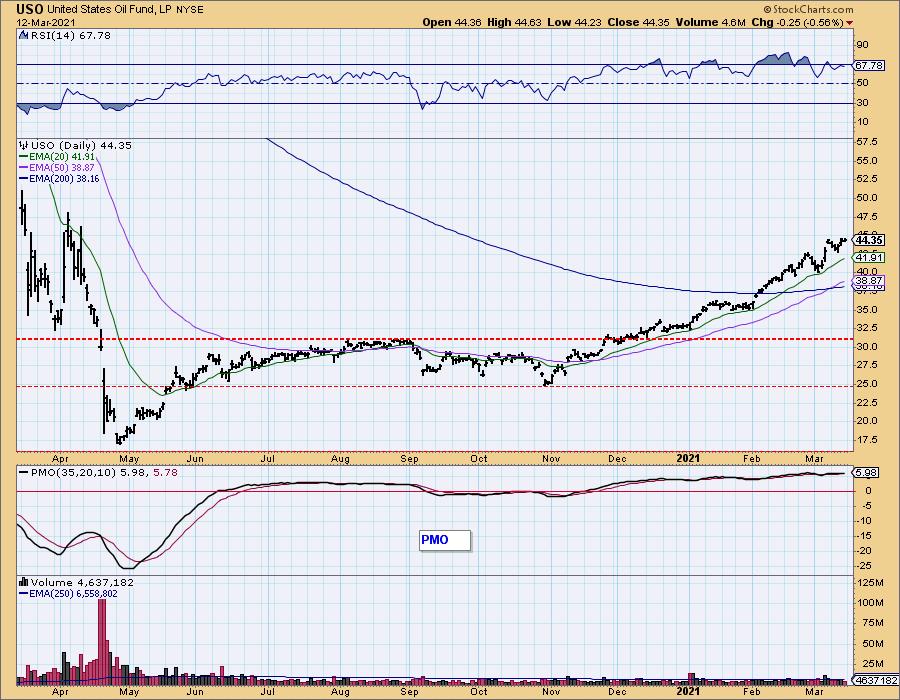 USO/$WTIC Weekly Chart: The weekly chart of $WTIC does show us that overhead resistance has arrived at $65/barrel. It should move through it, but we could see some consolidation similar to early 2021 when resistance was reached just above $50. 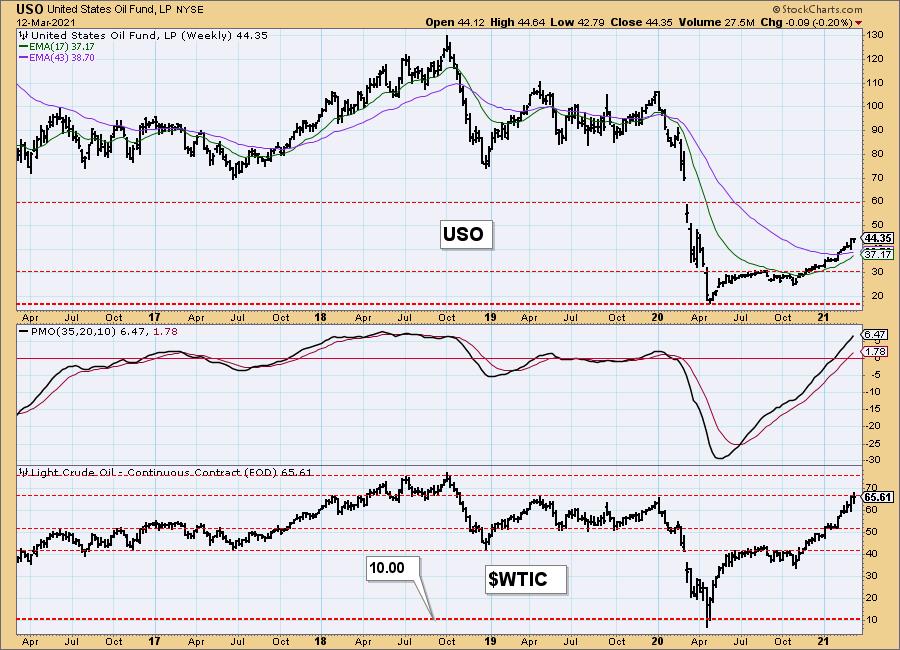 TLT Daily Chart: The bearish descending triangle resolved downward as expected. With yields and interest rates continuing to rise, Bonds will continue to slide. The PMO has turned down below its signal line which is especially bearish. The RSI is oversold, but nearly as oversold as we've seen it previously. 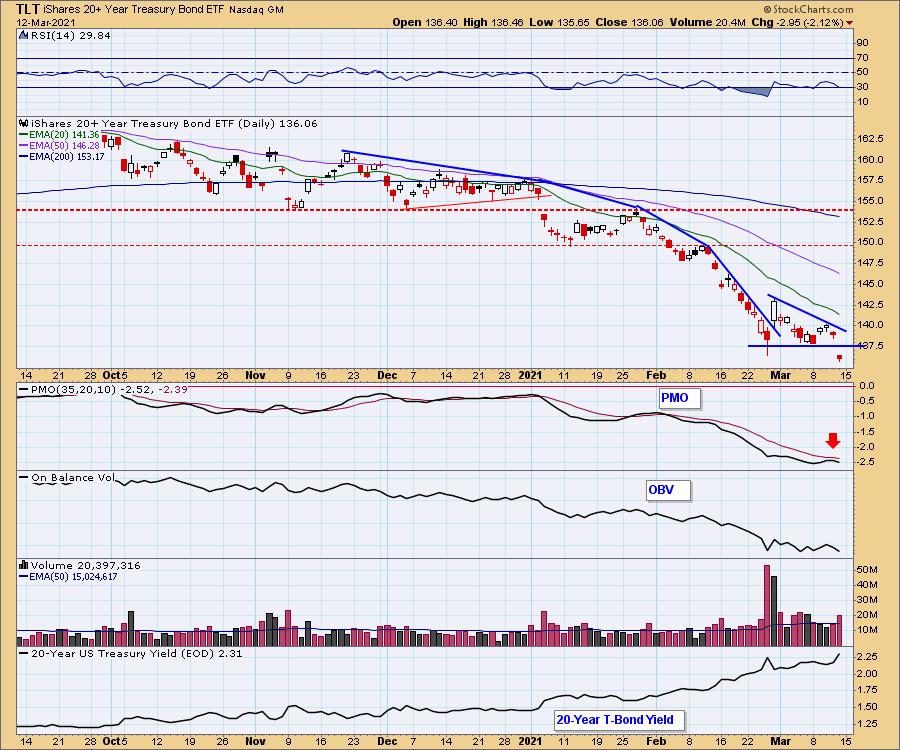 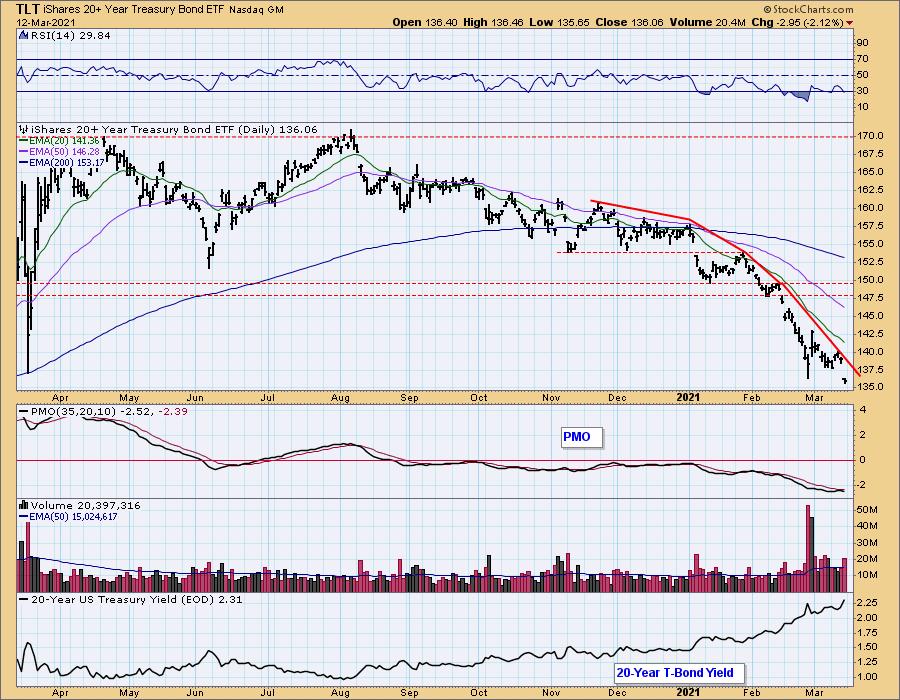 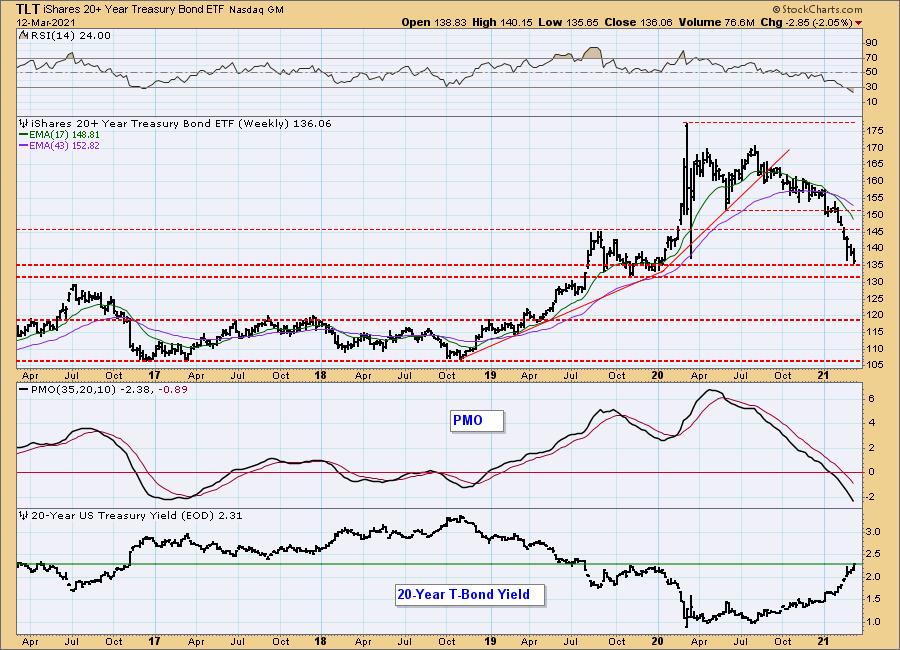