The current rally was launched off the early-October low. Since then, the market has entered a period of very low volatility, characterized by a reluctance to decline, and a penchant for small, daily advances. There was a high volume spike on Tuesday that I will attribute to traders going flat for the holiday; otherwise, volume has been rather thin. While October is uncharacteristically early for a Santa Claus rally initiation, it looks as if that's what we've got. 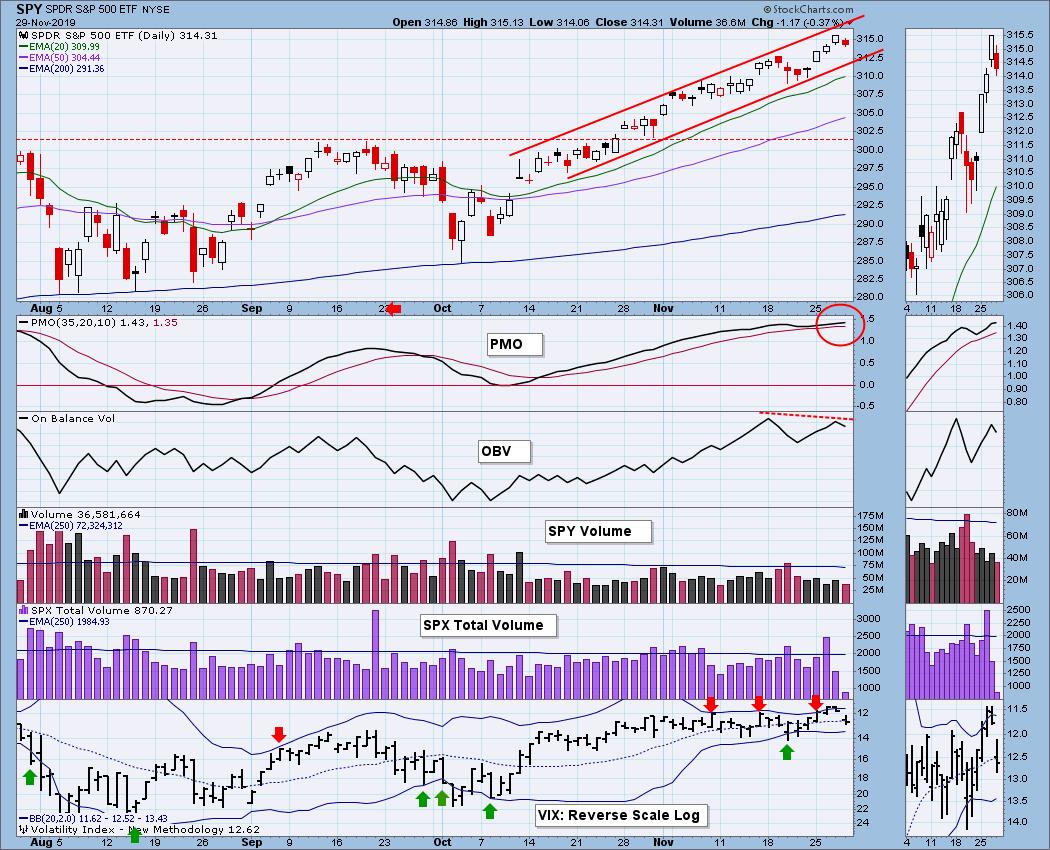 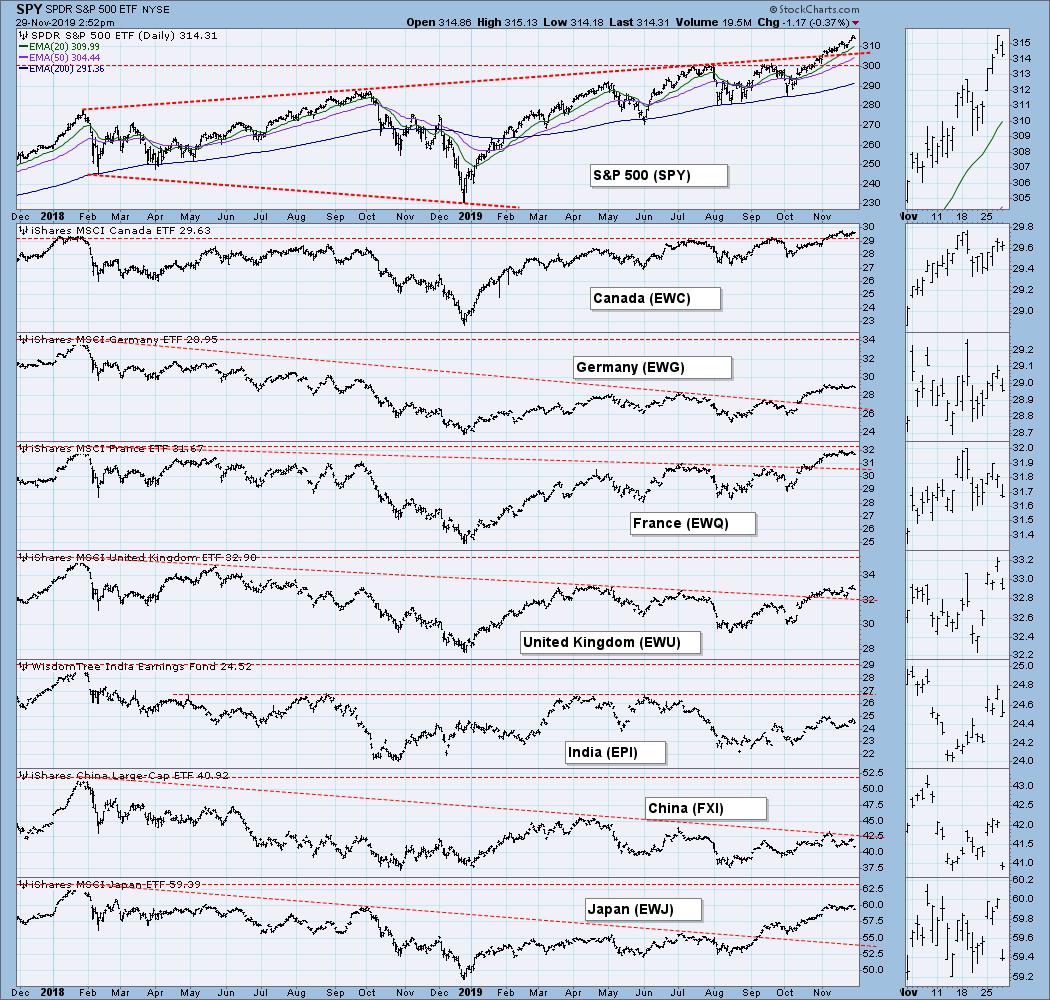 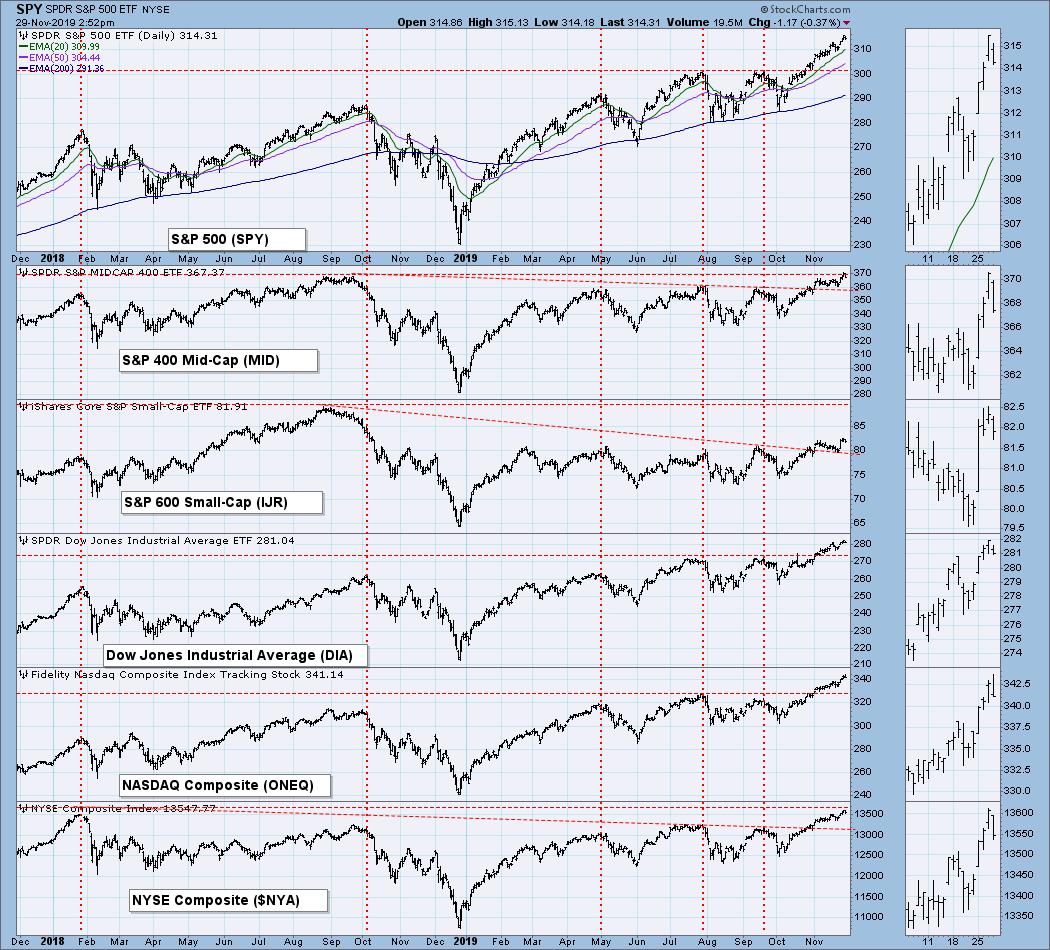 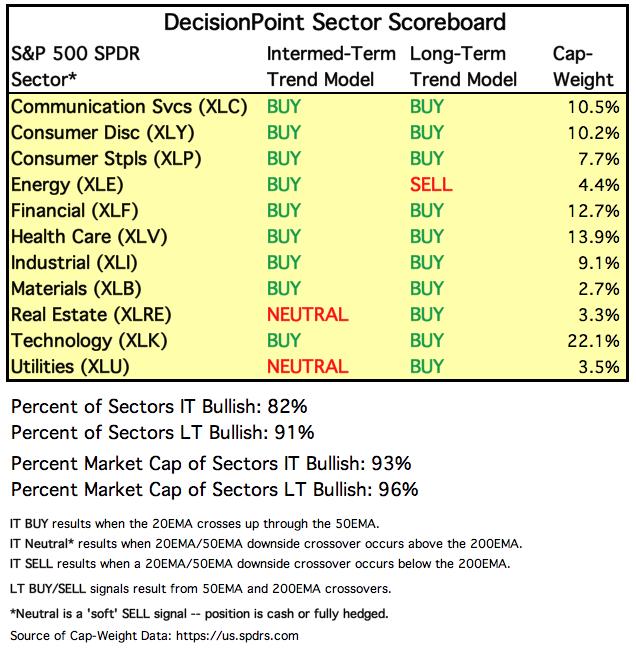 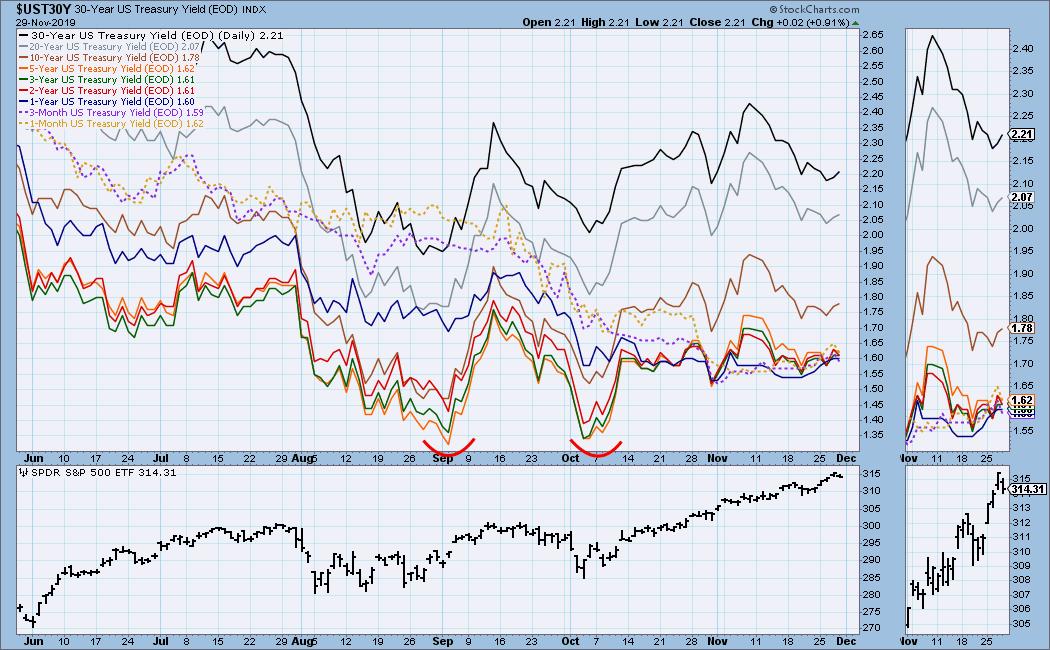 SPY Daily Chart: The Bollinger Bands are choking the overbought VIX, a condition that will probably lead to a pullback. 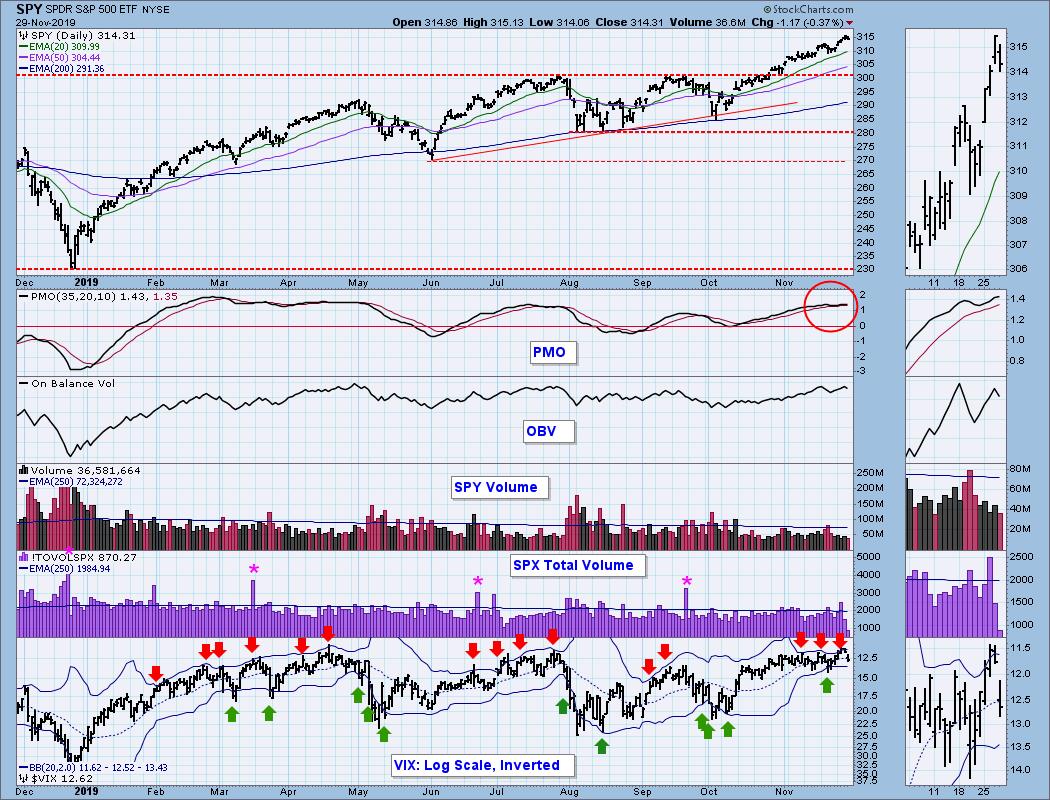 SPY Weekly Chart: The rally from the October low has been quite steep, so steep that I am beginning to compare it to the parabolic advance into the early-2018 top. 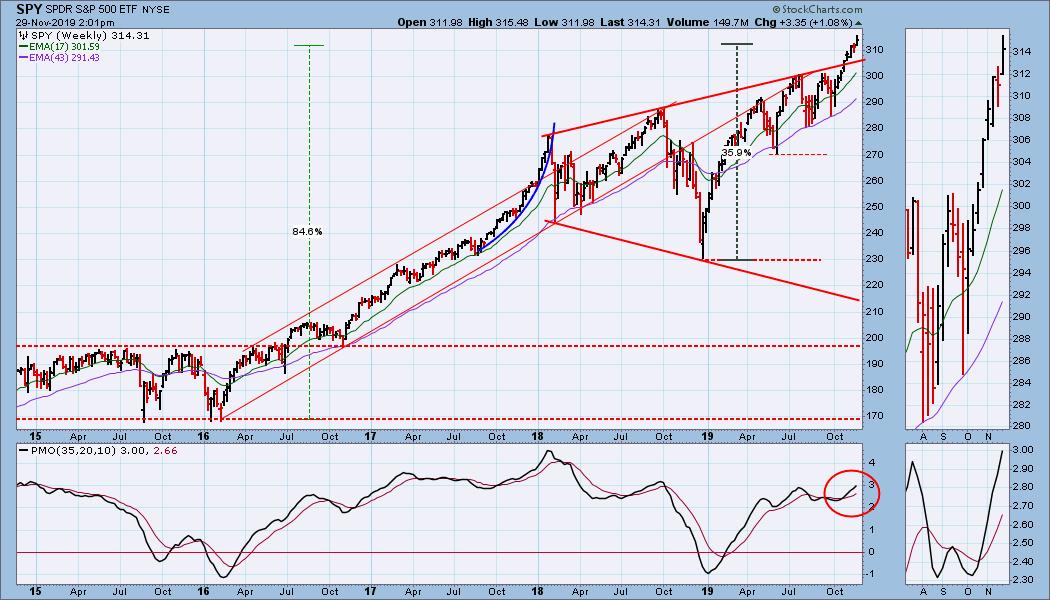 SPY Monthly Chart: The monthly PMO has been relatively flat for nearly four years, notwithstanding the glorious detail shown in the thumbnail panel. Flat may seem boring, but note that it has been flat at about +10. That's very bullish. 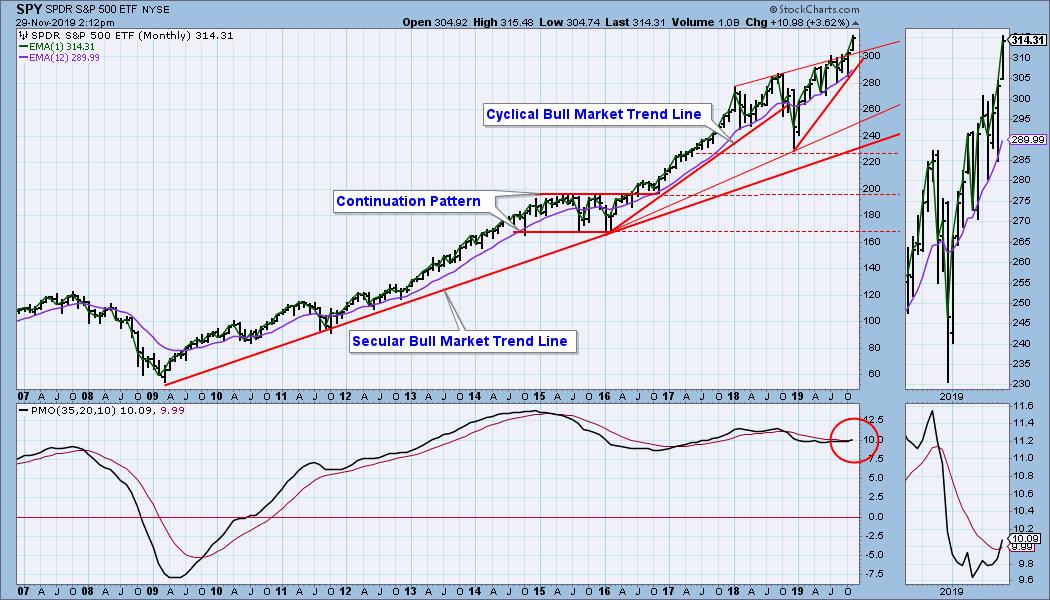 Climactic Market Indicators: In spite of Tuesday's volume spike, I don't think the overall climax threshold was reached this week. 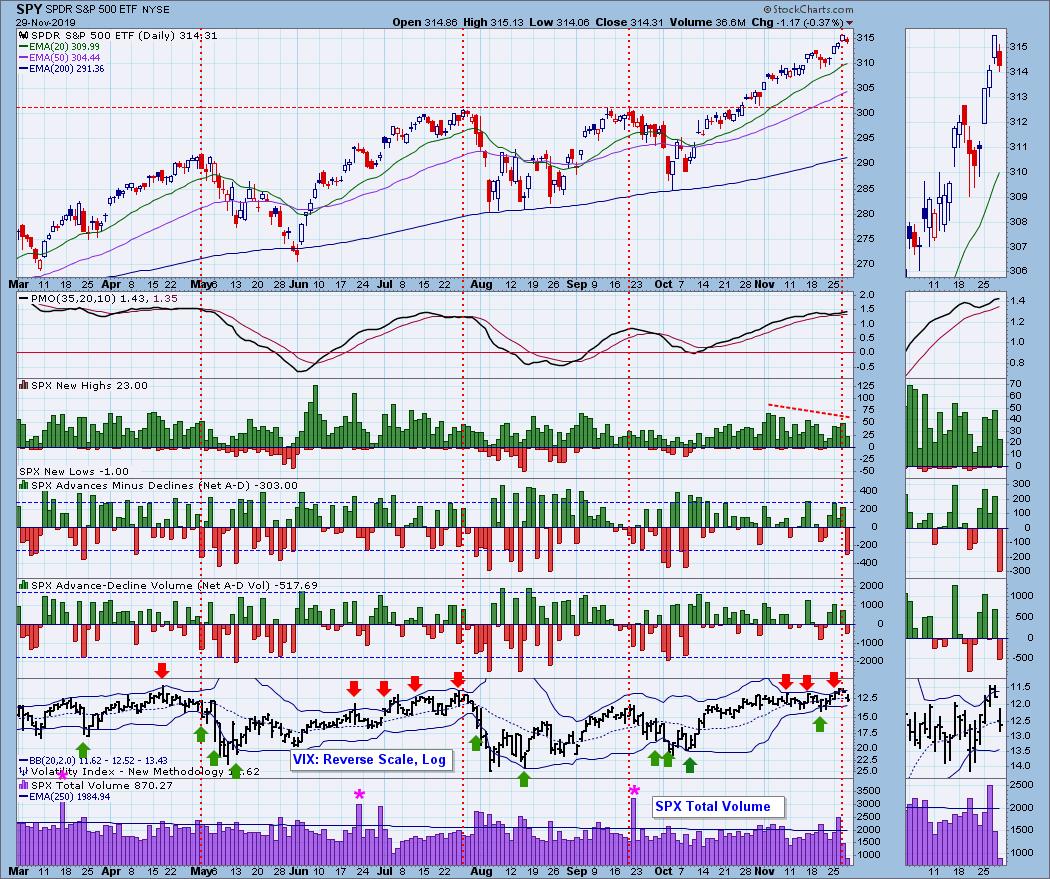 Short-Term Market Indicators: There are some negative divergences over the last seven weeks, but they are not as severe as we saw in July. 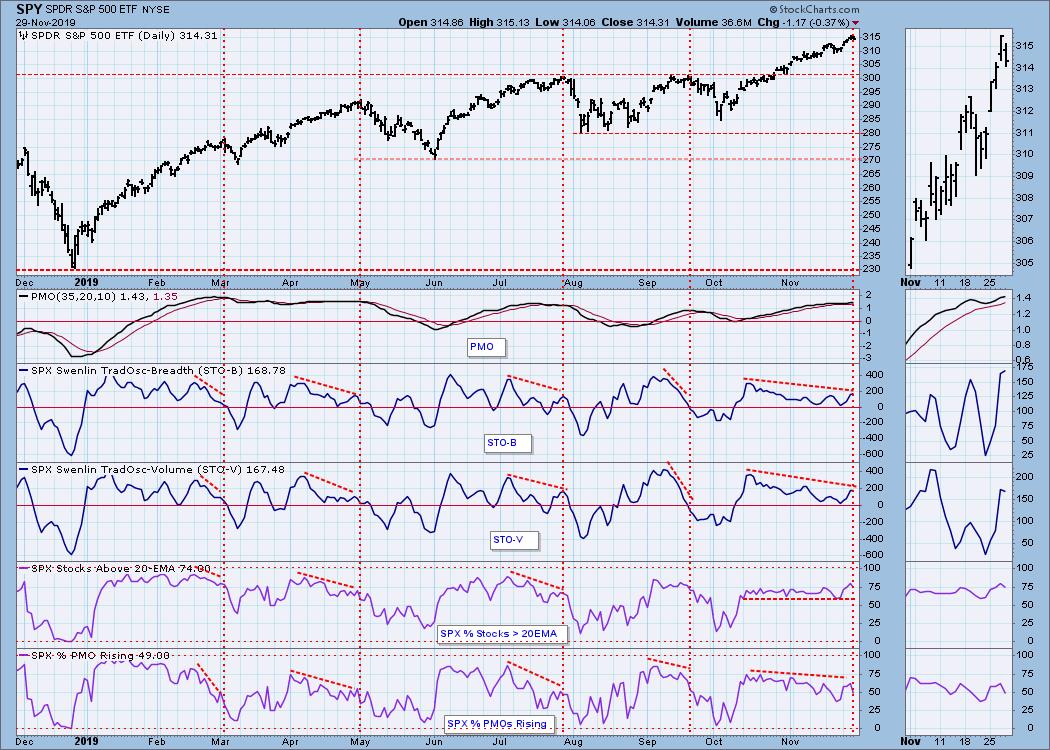 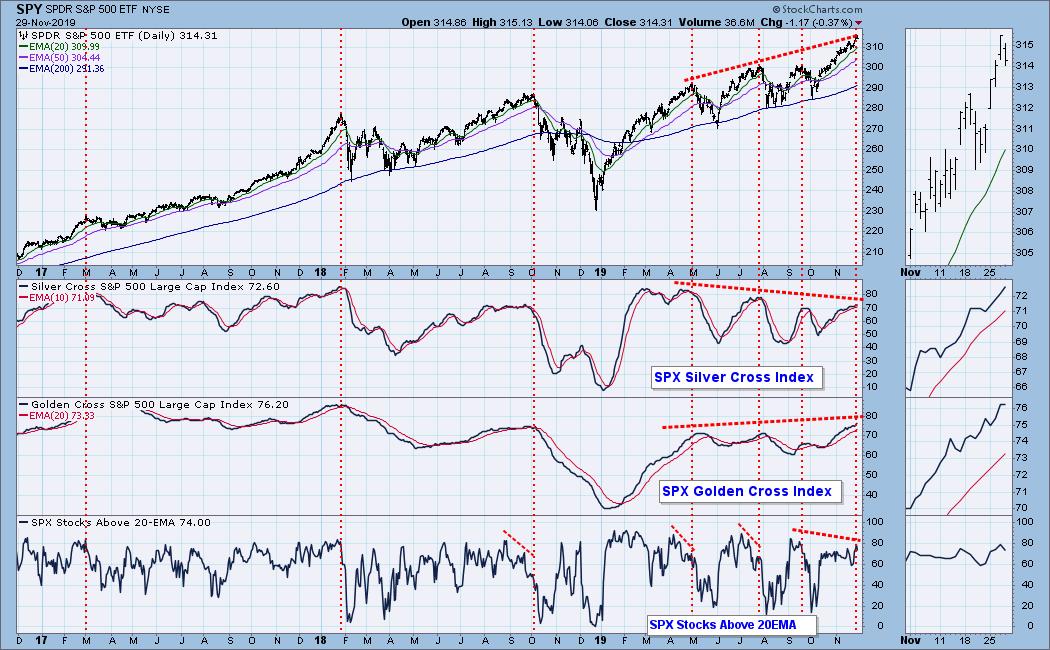 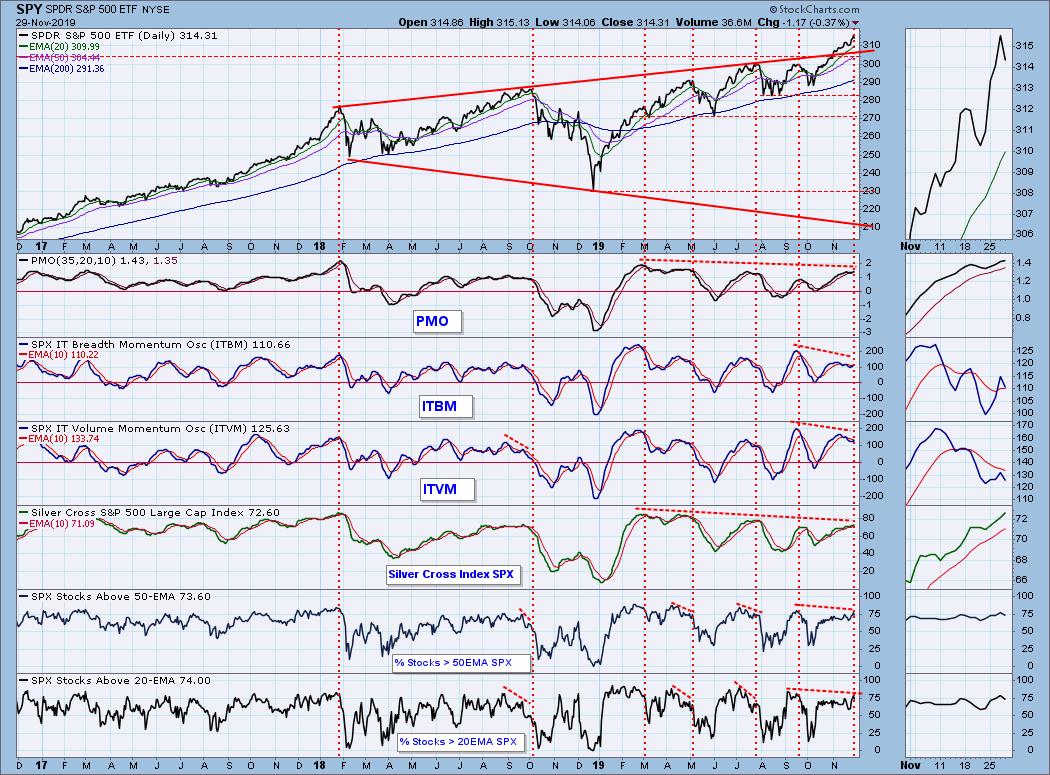 CONCLUSION: The trend is up, but the market condition is somewhat overbought and showing some negative divergences. Seasonality is positive, and the Santa Claus rally is in full swing. I do not care for the market action we have seen since the October low, particularly the generally low SPX Total Volume seen in the last three weeks. Yeah, the market has been going up, and that's great, but it does not even try for healthy pullbacks. This will be great for the bulls for as long as it lasts, but the piper will be paid eventually. I can't know when this will end, but I'm thinking toward the end of December or early-January. Sooner is not out of the question. 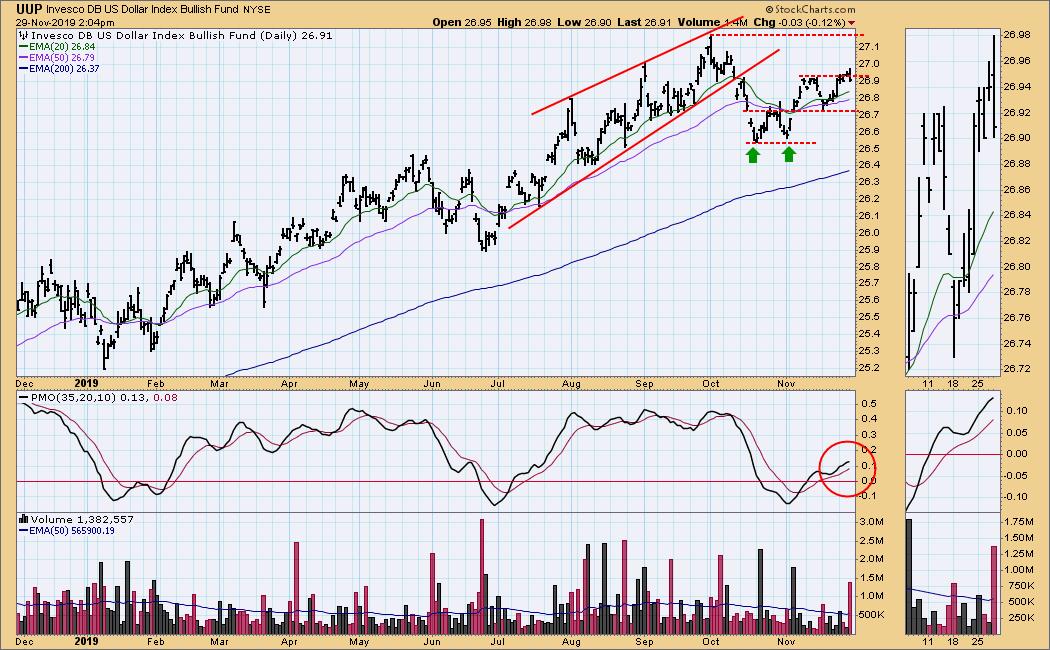 UUP Weekly Chart: After breakout above long-term resistance, there was technical pullback testing the new support, which held. 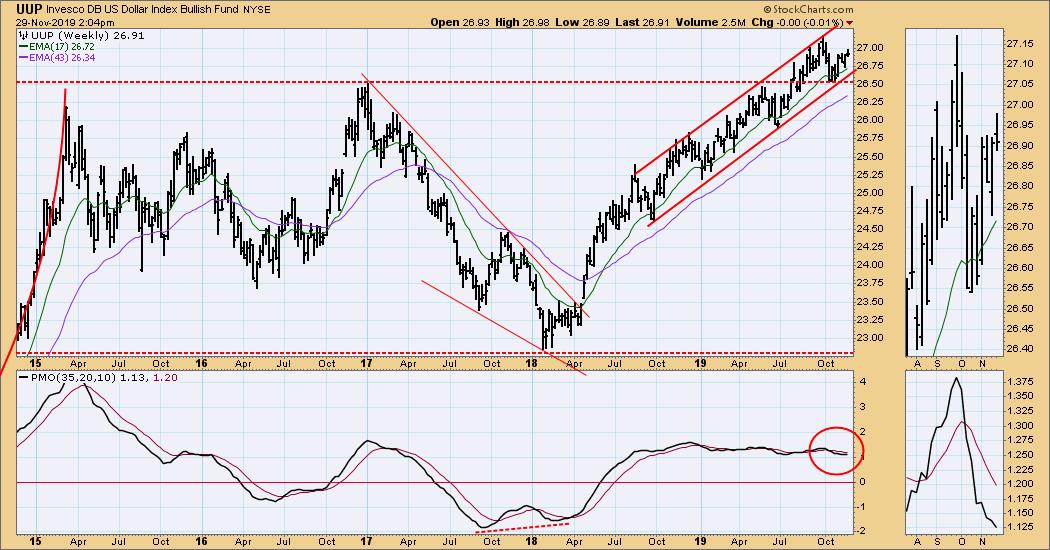 UUP Monthly Chart: In this time frame we can see that the horizontal support line goes back 10 years. 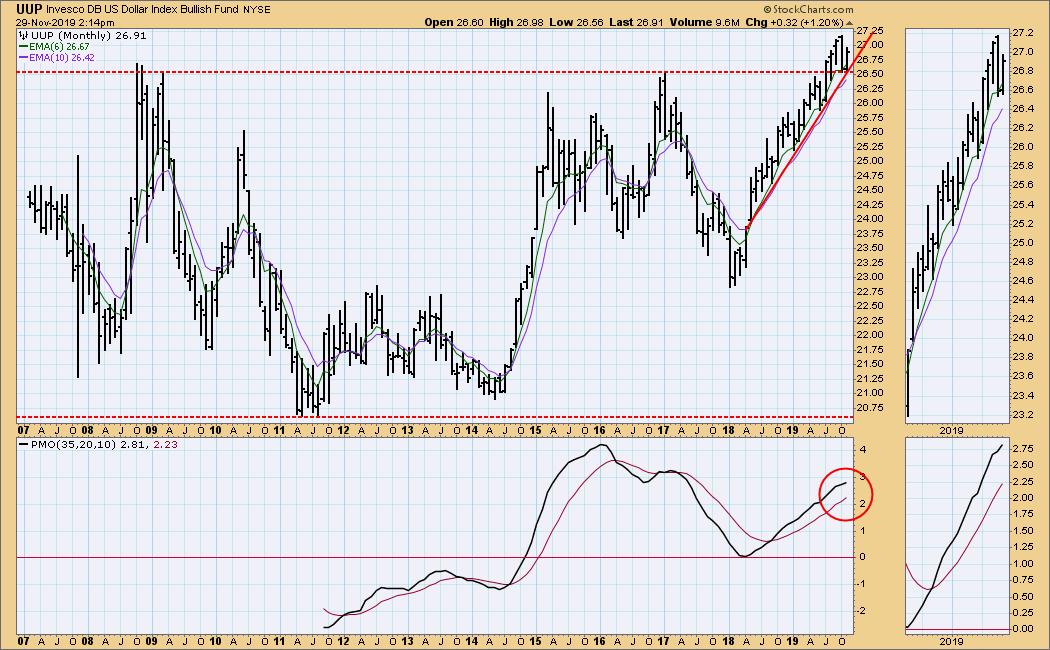 GOLD Daily Chart: This week gold formed a double bottom, and the daily PMO turned up. This is bullish for this time frame. Another good sign is that PHYS traded at a premium on Friday, which implies that sentiment may finally be turning bullish. 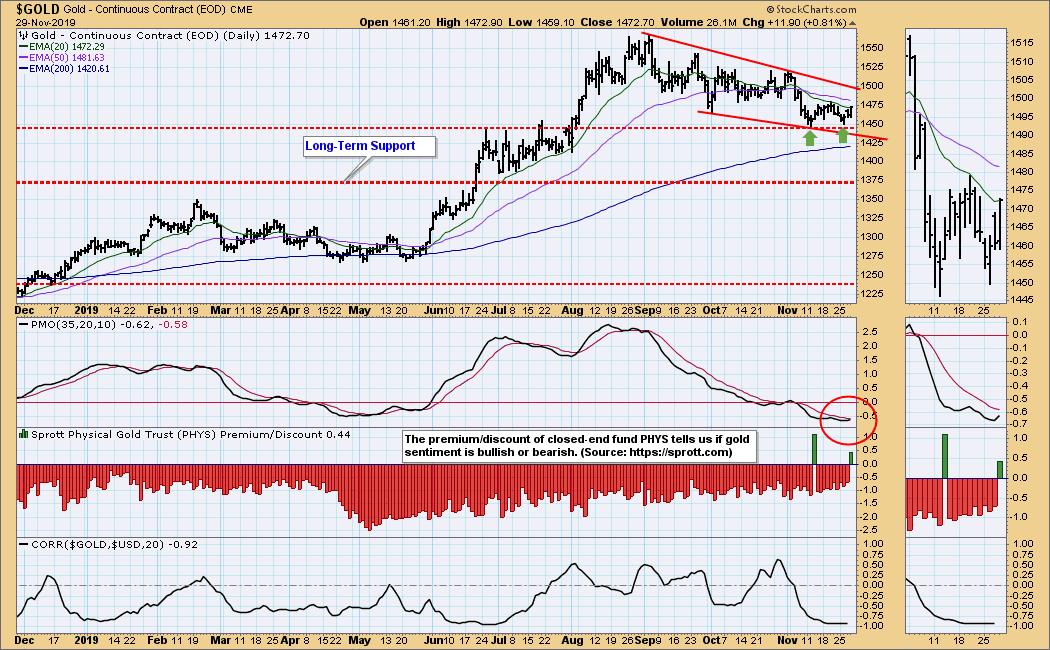 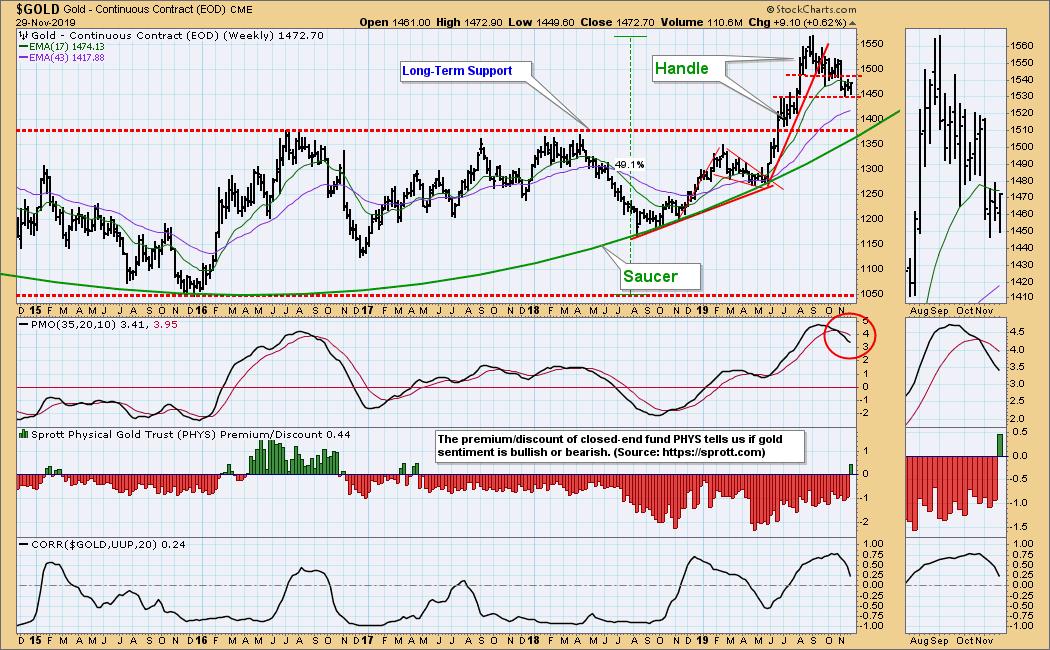 GOLD Monthly Chart: Note that the handle is gold's rally above long-term resistance at 1375. This chart looks very bullish, but gold must remain above 1375. 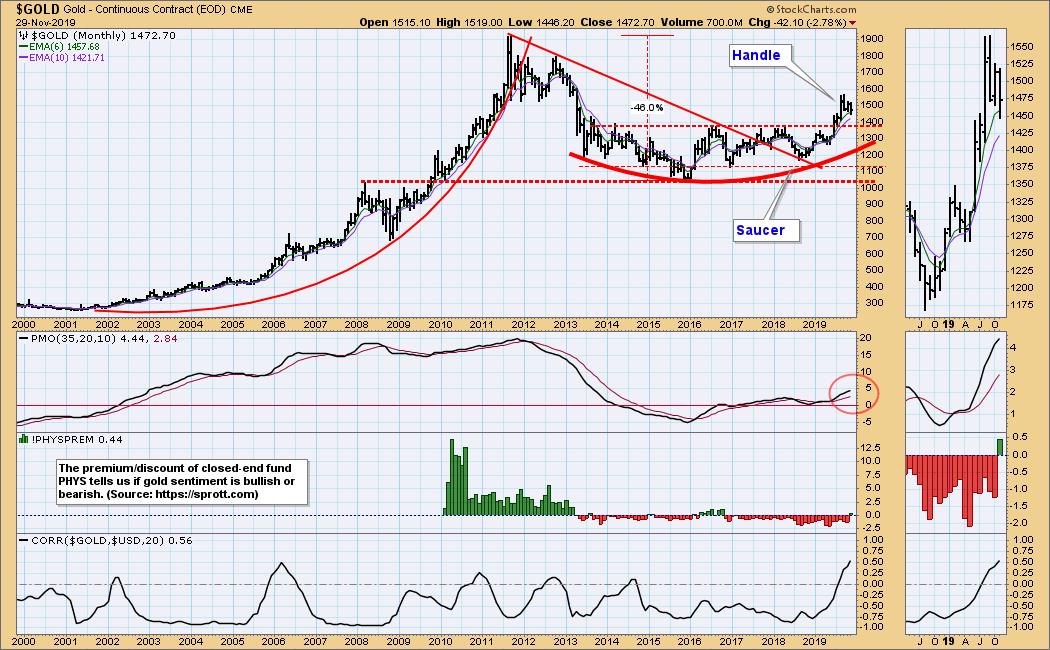 USO Daily Chart: The rally from the October low has failed to reach the top of the trading range, and today's decline would seem to have started a pullback. 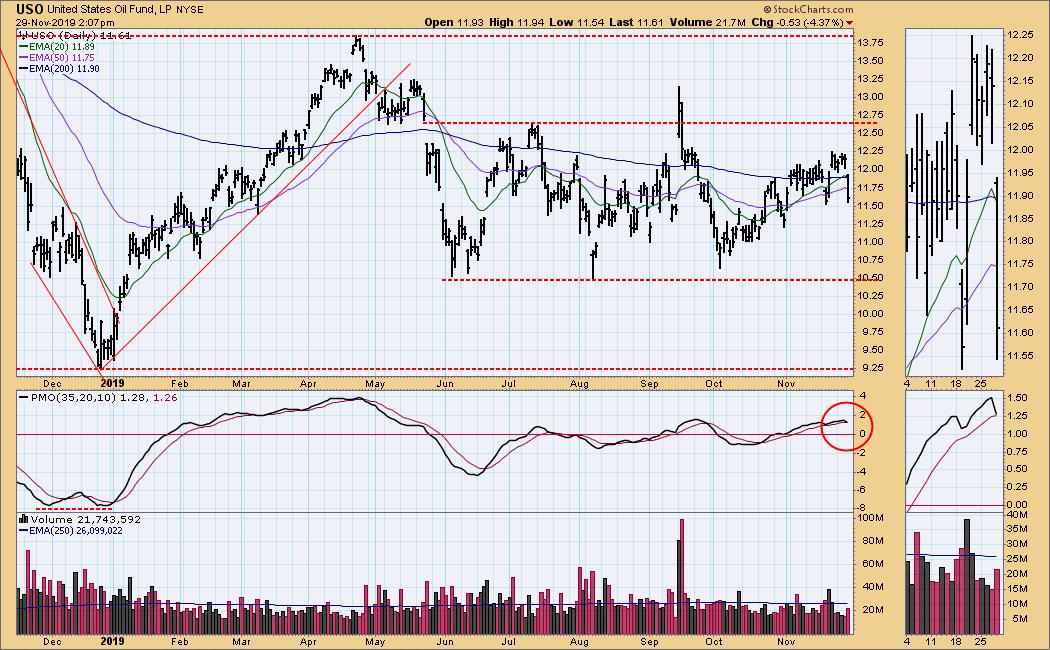 USO Weekly Chart: Note that the weekly PMO has been running flat and at zero since about June. This confirms that there is no internal force pushing USO anywhere. 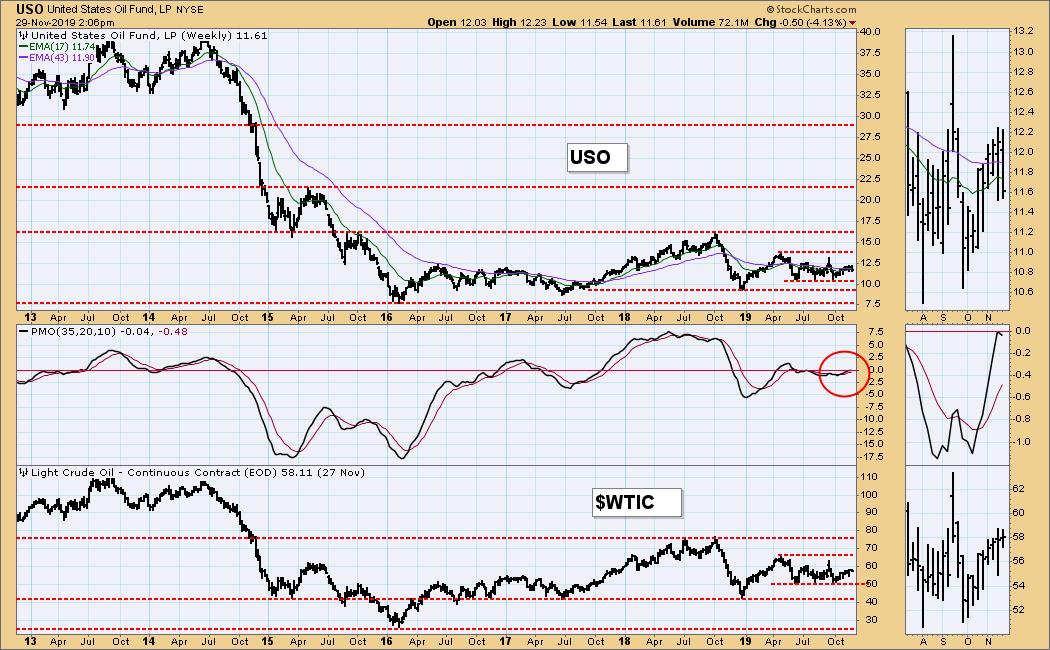 USO Monthly Chart: USO is range bound and in a basing pattern. This could last quite a while, years even. 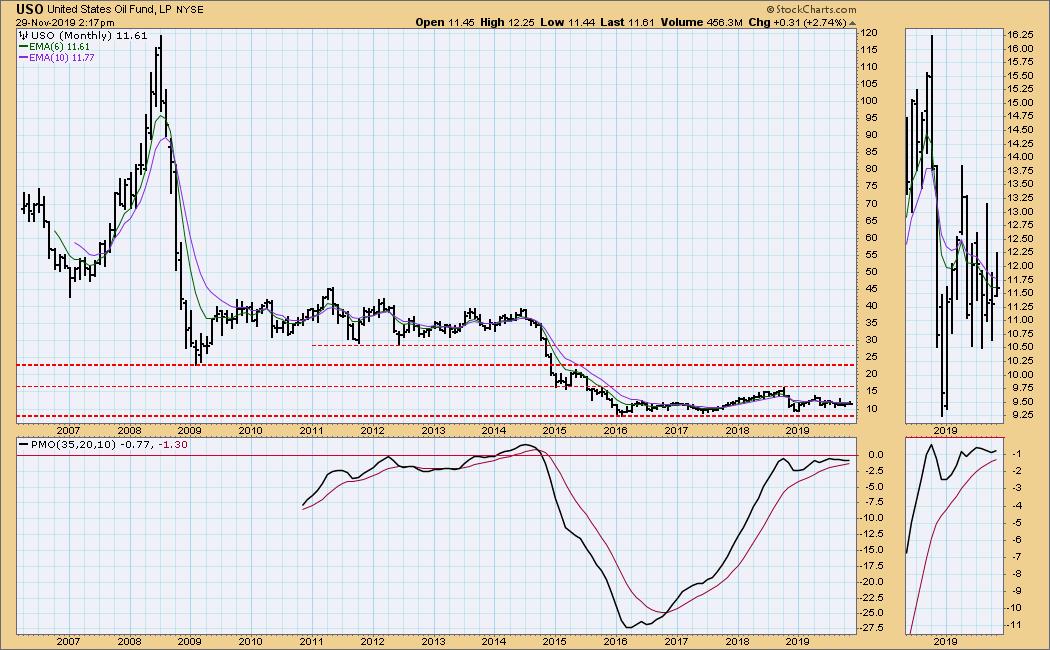 TLT Daily Chart: I think the September high and the November low define the range for TLT until something happens -- compelling news or Fed rate change. 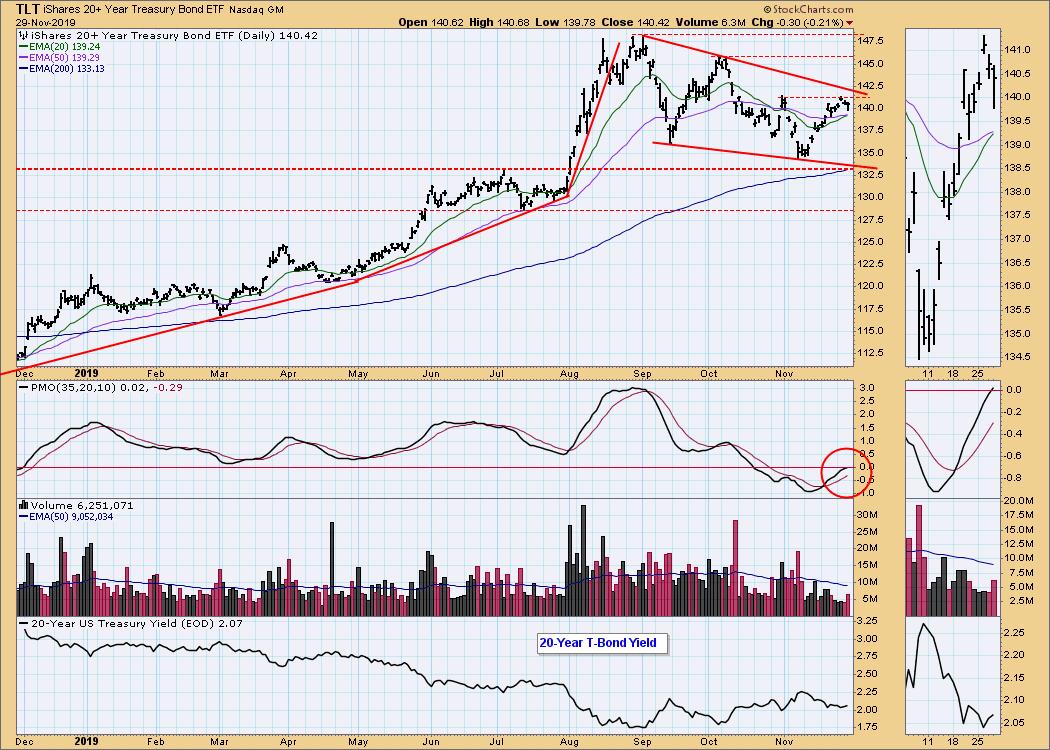 TLT Weekly Chart: The parabolic advance broke, and price moved back to the rising trend line. 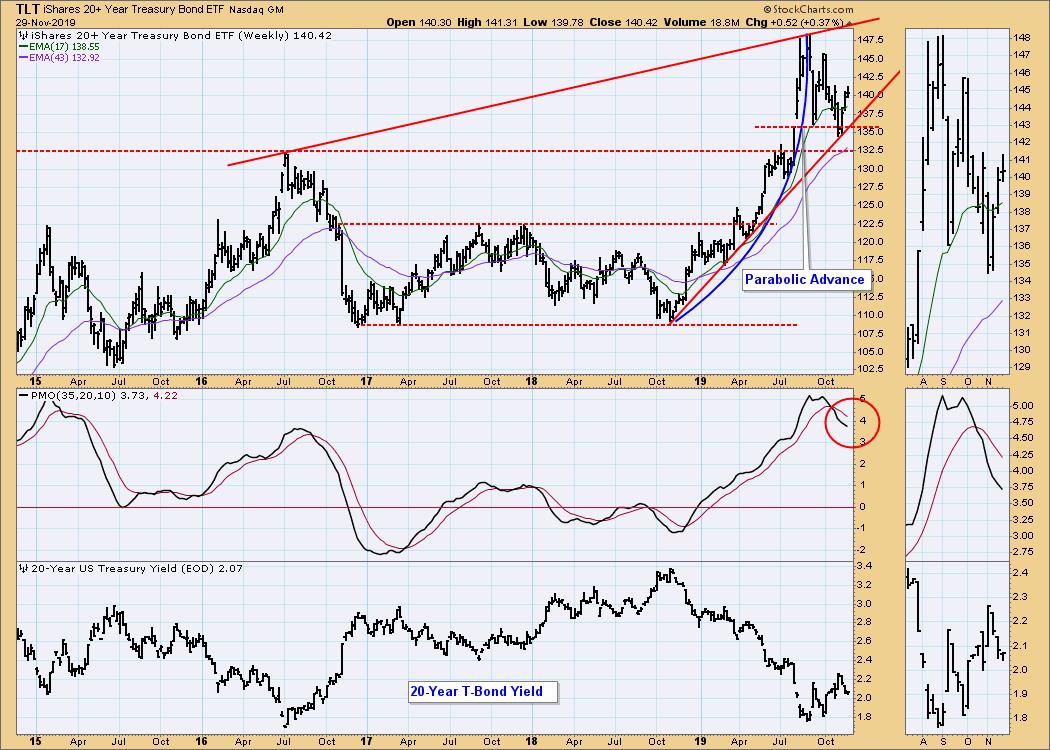 TLT Monthly Chart: Price is moving down from the top of a rising trend channel, and the implication is that TLT will be under pressure for a while, but the long-term picture is bullish. 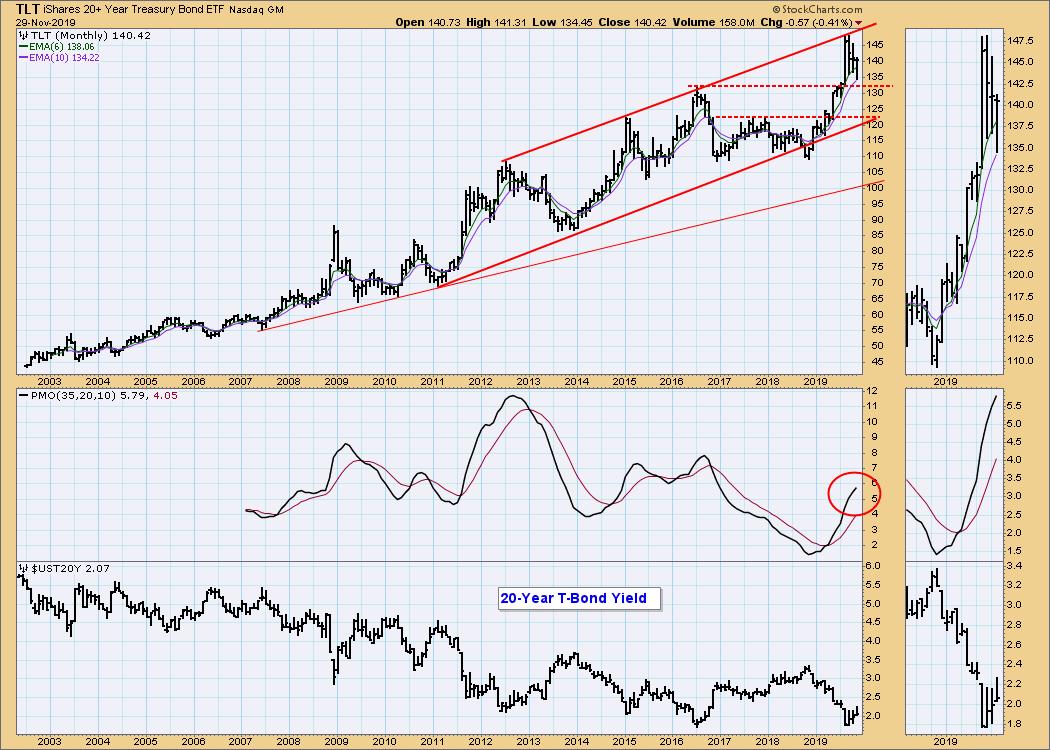